Ben Donovan is really, really big. He’s also a powerful brawler. His size, strength, talent and experience even allow him to engage some superhuman opponents. Hitting him is only likely to achieve results if one uses a large weapon, superhuman strength or some special martial technique.

Ben seems to be the enemy of doors everywhere, crashing through them whenever he has a credible excuse.

Donovan seems to be a fair criminal defence lawyer. Not exceptional, but not bad either.

“Big Ben” Donovan, a towering Harlem attorney, was always a bit on the shady side. Through various up and downs resulting from his questionable ethics and affiliations, he has been practising law since at least the 1970s.

When encountered in 1973, he was the attorney of one Mrs. Jenks. Mr. Jenks having been recently killed, Donovan was helping his widow put her late husband’s business into order. As a typical Donovan move, he started dating the attractive Mrs. Jenks on the rebound.

However, while Mrs. Jenks agreed to go to a party so she could move on with her life, she refused to sleep with him. Donovan was at this point way too drunk to take rejection gracefully, and Mrs. Jenks had to flee from the giant.

She found refuge in the office of Luke Cage, whom she had previously hired to investigate her husband’s death. Minutes later the hulking solicitor burst through the door. Cage took down the raging giant. In the fine tradition of action movies, Donovan decided he was now his buddy. And his attorney, which is somewhat less common in action movies.

Donovan did make good on his promise when Cage’s paramour Dr. Claire Temple was arrested for a crime she did not commit. As Donovan was working on the case, Mrs. Jenks was killed in an unrelated incident ; with her last words she chose to falsely confess to the murder Dr. Temple was accused of, knowing that the lady doctor was innocent.

This destroyed the case against Temple, and Donovan finished wrapping up the case so Claire could go free.

However, this was the last time Donovan represented Cage and his friends. Cage’s friendship with Daniel Rand-K’ai led to him being advised by Jeryn Hogarth, Rand Industries’s chief legal eagle. Power Man and Iron Fist occasionally met with the well-connected Donovan when looking for information, though.

During this era, Donovan had a son. His son was also called Benjamin. The younger Benjamin was nicknamed “Little Ben” since he turned out to be nearly as tall and powerfully-built as his father. Though Donovan never saw his son after he left, he continued to feed a trust fund to pay for his education for years, though Little Ben’s mother hid that fact from her son.

Little Ben Donovan though that it was his football scholarship that was paying for his studies, and resented Big Ben for having seemingly deserted him.

Another familial difficulty marred Big Ben Donovan’s life during this general era. His brother Paul Donovan was the leader of a politicised Harlem street gang called the Thunderbolts. Like his brother, Paul was not that good at assessing the long-term consequences of his actions. Thus, he managed to start a turf war with the Maggia.

Paul Donovan tried to recruit a Green Beret who had just returned from Việt Nam, Bill Carver. But Carver rejected the offer. Donovan and the Thunderbolts insisted, and Bill Carver (who had just started working for the D.A.) and his kid brother Lonnie worked to put an end to the gang. With the help of Daredevil and the Black Panther, the Carvers sent Paul Donovan and his men to prison. 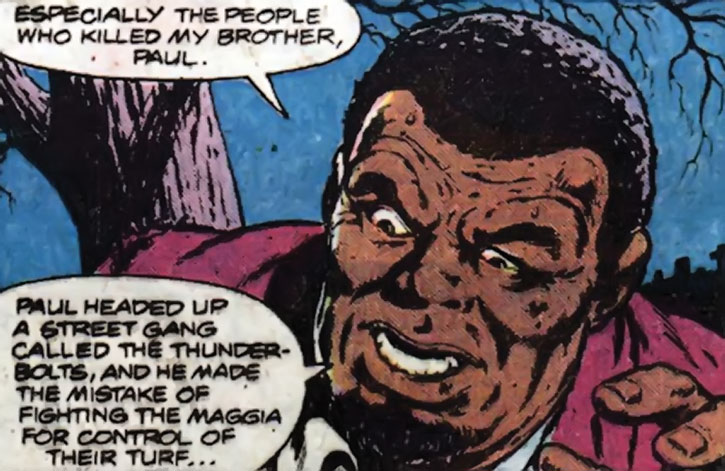 This provided a golden opportunity for the Maggia to ice the troublesome criminal and sort-of-activist. And thus, Donovan was murdered in prison. Beside himself with anger, Donovan hired a sniper to kill Lonnie Carver. He then paid the hitman to kill Bill Carver at his kid brother’s funeral, but a lightning bolt killed the hitman and nearly killed Carver.

The assistant D.A. survived thanks to an experimental treatment and became the masked avenger Thunderbolt.

Donovan also schemed against the Maggia, aiming to steal millions of dollars in drugs from them as revenge for having killed Paul. He was successful, and hid hundreds of pounds of dope in a cemetery.

Top Maggia lawyer Caesar Cicero was put in charge of the effort to recover the stolen narcotics. He traced the dope to Big Ben. Holding the colossal lawyer at bay with submachineguns, the wise guys had Donovan beat up by another giant — the Maggia hitman Man-Mountain Marko.

Donovan escaped. Badly battered, he ran to Luke Cage’s office for protection. Minutes after he crashed through the door and collapsed, the Maggia men came in. Man-Mountain Marko managed to defeat Cage by hitting him with exposed electrical wiring.

The wily Cicero determined that the dope was at the cemetery. However, in the meanwhile he attracted the attention of Thunderbolt – who had been tirelessly looking for whoever had murdered his kid brother. Iron Fist also came in, looking for his buddy Luke Cage. Both heroes found the made men, Donovan and the dope in the cemetery.

Donovan explained his revenge plot, not realising that Thunderbolt was Bill Carver. Iron Fist and Cage stopped the wise guys, and Thunderbolt took Big Ben Donovan down before dying.

(The next two appearances of Big Ben both seem apocryphal. I’m strongly inclined to consider them as out of continuity. Both these stories are covered in this subsection.)

In 2001, a man identified as Big Ben appeared as a henchman for Tombstone, opposing the Marvel Knights. Like most such henchmen, this man was out of character. He was also noticeably larger than even Big Ben Donovan, at about 8’ and 450 lbs..
(In DC Heroes RPG terms that would be Growth: 03, Always and Already Factored In, giving him a STR of 08 and a BODY of 08. Due to his superior reach, he had the equivalent of Martial Arts (AV): 07 with the Misc. Limitations Contingent on Growth and Only vs. Opponents Without Active APs of Growth.)

The next year an obese man named Big Ben, tall but clearly not as tall as Donovan, appeared in the Cage as a member of Tombstone’s prison crew. He worked along with people calling themselves the Rocket Racer and the Hypno-Hustler – who did not bear much resemblance to their namesakes either.

One may imagine that the Tombstone henchman was another very tall man called Benjamin. The Big Ben nickname is pretty much inevitable past 6’4” and it wouldn’t be odd for two different men to bear it. Likewise, Tombstone’s prison crew may have been a prison gang with a tradition of naming themselves after minor Black super-criminals.

If one absolutely wants these appearances to feature Big Ben Donovan, our No-Prize Hypothesis  is that Mr. Donovan became addicted to diluted MGH (Mutant Growth Hormone ), which he used to increase his size and strength.

This addiction made him a criminal so he could finance his habit, and when prison forced him to go cold turkey this backlashed on his organism, making him obese, constantly tired, hunched over and feverish.

In 2008, Big Ben Donovan was accused of having beheaded three little kids, and confessed. This startled Luke Cage, who knew that Donovan was scum but was convinced that he would never do that. Cage asked star criminal defence lawyer Matthew Murdock and P.I. Dakota North to investigate. They and their allies discovered that Donovan had indeed been framed.

A Federal task force tracking down terrorists by monitoring shipments arriving in New York City had struck a deal with former mobster Eric Slaughter. Slaughter’s main enforcer was the one who killed the kids, to “teach a lesson” to a dock worker who was causing problems.

Deciding to protect their key informer, the small team of Federal agents had some random criminal accused of the murder. They chose Big Ben Donovan, who at that point was doing time for assault. They told him that they would murder his son Little Ben if he didn’t take the fall. Donovan was willing to die for his son and confessed.

Donovan Sr. represented himself and was soon on death row. Presumably, he had deliberately botched his defence.

North and Murdock tracked down Little Ben, clashed with the rogue Federal agents and exposed the conspiracy. Big Ben was cleared when other Federal agents came for the real murderer and reassigned the rogue agents. Donovan Jr. discovered that his father wasn’t actually a complete scumbag – and the existence of the trust fund.

After being exonerated, Big Ben Donovan started working for the criminal genius Nightshade, apparently as a solicitor. In 2010, he was seen visiting several of Nightshade’s agents in prison and assessing their legal situation ; it seemed that he was acting as their counsel.

Since there is no way that a man with Ben Donovan’s rap sheet would ever be allowed to act as a legal counsel, this is quite intriguing. Interesting possibilities would be :

Donovan is a bad cat from Harlem. He works hard, and he parties hard. He has the habits of most lawyers — he closely watches what he says (except when roaring drunk) and considers most things to be negotiable. Big Ben is not used to being seriously hurt or beaten since he’s so damn big and strong, and will react emotionally when that occurs.

Big Ben tends to be roguish and on the lookout for number one. He’s not evil per se, but he really likes money due to his nouveau riche lifestyle, and will be tempted by easy profit. In some cases, those risks have proven greater than anticipated. And thus, his lack of discipline eventually gave him a rather seedy track record.

Donovan also went off his rocker when trying to avenge his brother Paul, and may have an alcohol problem.

In prison, Donovan found religion and became a Muslim, wearing a prayer hat at all times. He was a sincere convert, and wanted to atone for his bad deeds. Dying to protect his son was a manifestation of this newfound conscience and discipline. Whether his conversion stuck or he backslid into amorality is unrevealed – but as noted he never was much for probity.

(While badly drunk) “Ah-hah ! Thought you was jivin’ me for anotha dude afta spendin’ up all my party-timin’ money, uh ?”

(Talking about his platforms) “I dig these new styles in men’s shoes, Cage, ’cause they make a decent weapon ’gainst dudes like you !”

“Ain’t nobody slappin’ Big Ben Donovan down with just a fist, bro !”

“She was a lot more woman then either of us ever gave her credit for, Luke.”

“You’ll never get away with this, Cicero. Can’t we make a deal ?”

* Without Defensive Roll
** Against unarmed damage 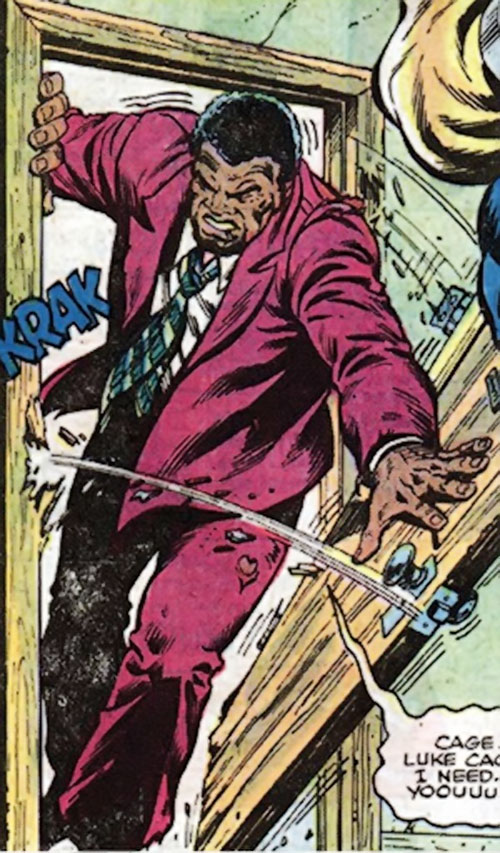 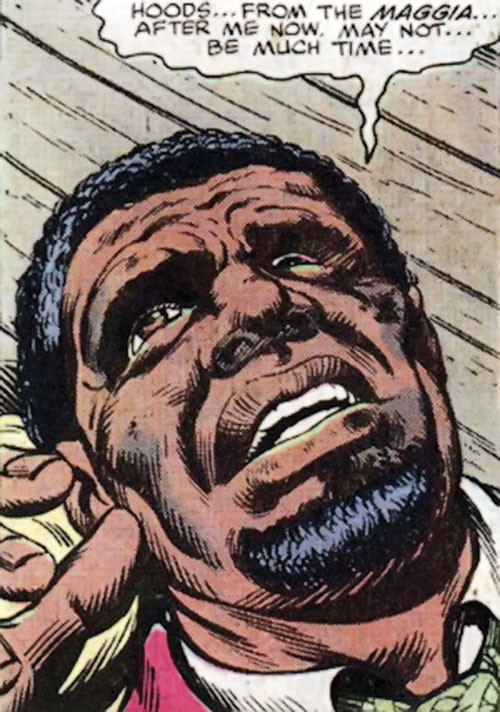 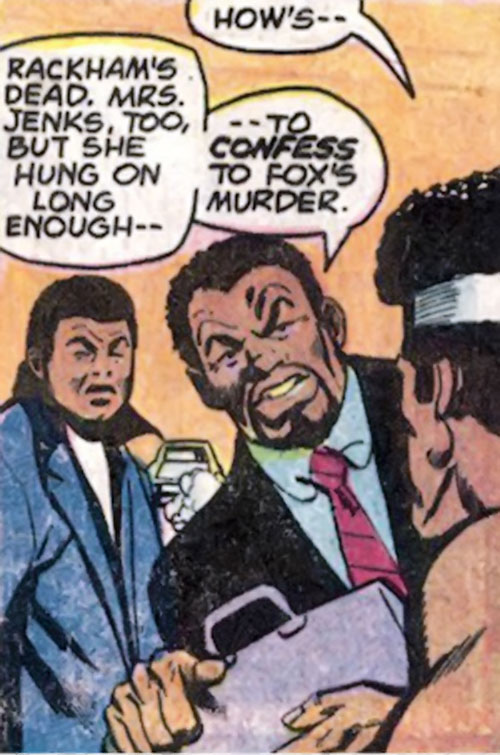 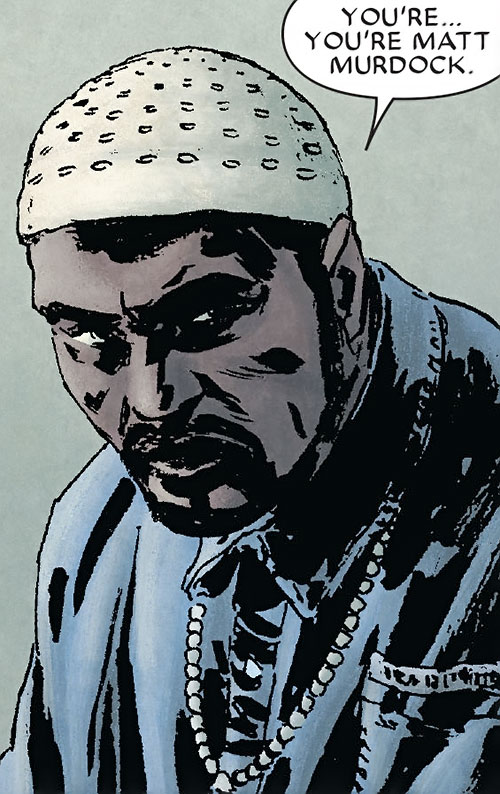 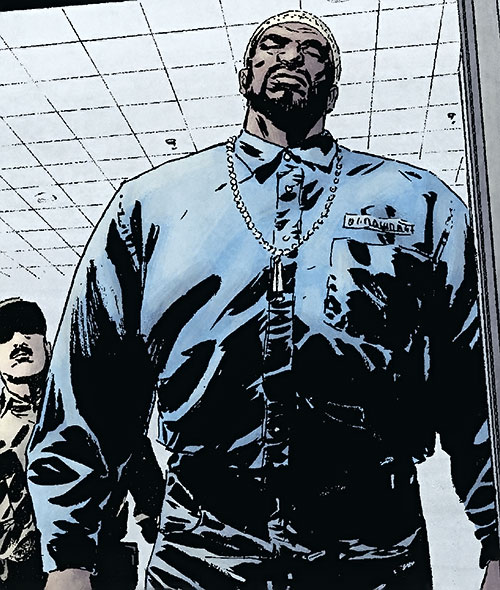 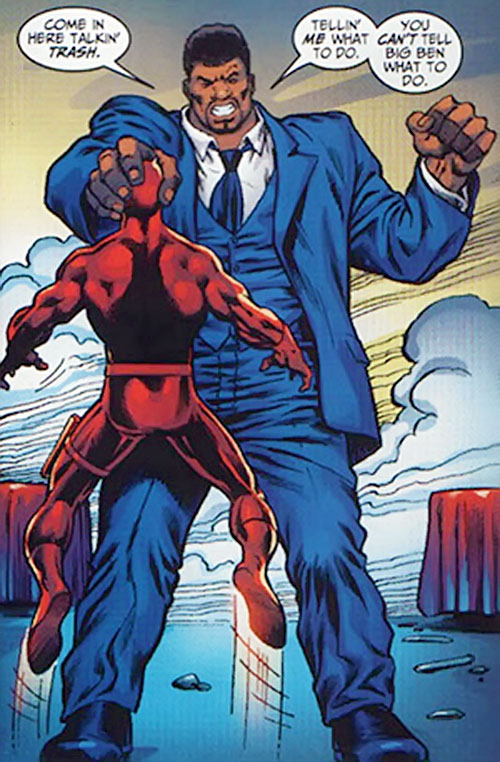 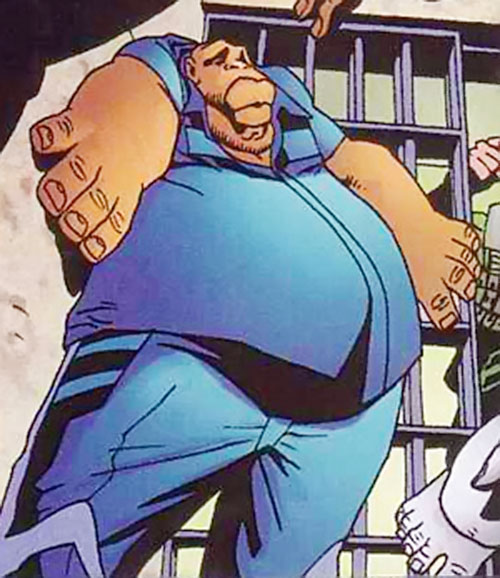