Big Trouble in Little China is a 1986 action comedy by John Carpenter, and a a shining example of a geek cult classic.

It tanked commercially (clearly too many people were not brought upon this world to get it (video)), but remains very popular and frequently quoted/referenced 30+ years after its release.

BTLC is a goofy action movie. Supposed hero Jack Burton is a lovable idiot who understands very little to what is going on, and his Chinese-American allies (who should stereotypically be the sidekicks) are the ones who actually manage the situation.

It’s full of magical mysteries, often making fun of “Mysterious Orient” tropes of older adventure literature, and is both exciting and hilarious.

Unlike just about everyone else in Big Trouble, Jack doesn’t have any special skills, knowledge, martial arts training or magical powers. However, he has amazing reflexes when it comes to catching thrown objects, and is fairly tough and muscular.

Jack is also very courageous, and despite his protestations he takes in stride bizarre and violent events remarkably well. He’s also an attaching bloke, despite being a bit on the dumb side, and makes friends very easily.

Jack is the would-be “hero” of Big Trouble. He muddles through the movie totally clueless as to most of what is going on, but unwilling to stand by while his friends take all the risks. So a summary of the events from his point of view would be “bwuh ?”.

Also I’d really hate to spoil even a tiny bit of this film, for anyone. 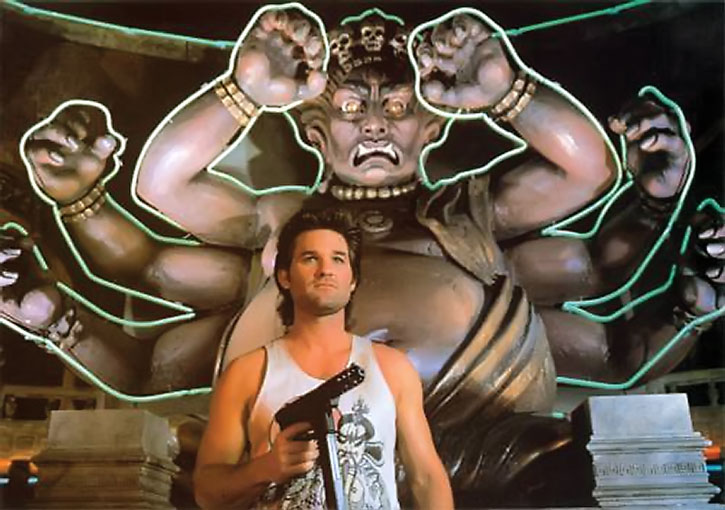 Alos, he wanted to get his truck back. It was stolen by the Lords of Death after Jack and Wang Chi ran from a fight between the Chang Sings and the Wing Kong. See the movie. Really. It’s a total classic.

Jack is fairly tall and well muscled, with shoulder-length brown hair and an unshaven chin.

His normal mode of dress looks to be brown moccasin boots, blue jeans and a white tank top. Tucked into one boot is a knife.

Jack Burton is the archetypal everyman hero. While he’s nothing really special, he’s brave, determined and always ready to help his friends even in the toughest, strangest circumstances. Unfortunately for him, he’s a likable guy who makes friends easily.

Due to his “everyman hero” aspect, Jack knows nothing about no extraordinary, supernatural things. He is completely flabbergasted (but not really scared) but most events in the movies.

This leaves the supposed “exotic supporting cast” to handle the titular trouble. When he appears, this genre inversion should be retained by having Jack be thrust in the hero’s position – but having people who traditionally would be the extras do all the thinking and heavy lifting.

Jack’s most endearing trait is that he’s a great all-American hero in his own mind. He always to act tough, cool, dramatic and heroic. This generally backfires on him… unless lives are at stake.

The quotes abundantly illustrate his generous grandstanding, his hyperbolic speeches, his awkward clichés and wobbly metaphors, and his habit of introducing sententious one liners with a “you know what ol‘ Jack Burton says in cases like this” – which obviously falls flat when he’s trying to impress enemies who don’t know him from Adam.

He also enjoys stock phrases and effects, intended to punctuate and further dramatize his dialogue.

Another interesting aspect of the movies is that, as an everyman, he uses a lot of somewhat racist, xenophobic clichés in his speech to try to designate the numerous Asian elements around him. The “Charlie Chan and and Fu Manchu” bit in his quotes is a good example.

But it is obvious to everyone that he’s not actually racist and simply completely misses the Orientalist and somewhat connotation of his words, like a big clumsy dog accidentally tipping over the furniture when running around.

Go ahead. Heroes will generally happen on Jack Burton when he’s bravely stuck in an improbable, highly explosive situation. He will of course accompany them in the midst of things, and grasp victory from the jaws of certain defeat by being overlooked by everyone and being in the right place at the right moment.

If you use Buckaroo Banzai in your campaign, Burton would have certainly worked a few times as a roadie for the Hong Kong Cavaliers.

[A highly magical assassin blows most of a building up with energy blasts] : “Hey, you ! Why don’t you come over here and fight like a man ?”

(To Gracie Law) “Would you just stop rubbing your body up against mine, because I can’t concentrate when you do that”

“OK, you people ! Sit tight, hold the fort and keep the home fires burning. And if we’re not back by dawn… call the President.”

“ Like I told my last wife, I said, ‘Honey, I never drive faster than I can see, and besides… it’s all in the reflexes’.”

“Just remember what ol‘ Jack Burton does when the Earth quakes, the poison arrows fall from the sky, and the pillars of Heaven shake. Yeah, Jack Burton just looks that big old storm right in the eye and says, ‘Give me your best shot. I can take it’.”

“When some wild-eyed, eight-foot-tall maniac grabs your neck, taps the back of your favorite head up against the barroom wall, looks you crooked in the eye and asks you if ya paid your dues, you just stare that big sucker right back in the eye, and you remember what ol‘ Jack Burton always says at a time like that: – ‘Have ya paid your dues, Jack?’ ‘Yessir, the check is in the mail.’”

Jack Burton: “You know what ol‘ Jack Burton says at a time like this ?”
Big magical Chinese enforcer: “Who??”
Jack: “Jack Burton… ME !!”

“Okay, I get the picture White Tigers, Lords of Death, guys in funny suits throwing plastic explosives while poison arrows fall from the sky and the pillars of heaven shake, huh ? Sure, okay, I see Charlie Chan, Fu Manchu and a hundred howlin’ monkey temples, and that’s just for starters, right ? Fine ! I’m back ! I’m ready, goddammit let me at ’em !”

Jack Burton: [Pointing to Chinese writing on elevator.] “What does that say ?”
Wang Chi: “Hell of Boiling Oil.”
Jack Burton: “You’re kidding.”
Wang Chi: “Yeah, I am. It says Keep Out.”

“Terrific. A Six-Demon Bag. Sensational. What’s in it, Egg ?”

“May the wings of liberty never lose a feather.”

“What does that mean ? Huh ? ‘China is here‘ ? I don’t even know what the hell that means. All I know is this Lo Pan character comes out of thin air in the middle of a goddamn alley, while his buddies are flying around on wires cutting everybody to shreds and he just stands here waiting for me to drive my truck straight through him, with light coming out of his mouth.”

Bonuses and Limitations:
Deflection/reflection is only usable against thrown objects (-2), cannot be used against hypervelocity objects (-1), is a Skilled Power.

Equipment:
Boot knife [BODY 06, EV 03 (04 w/STR)]. Jack spends a part of the movie waving a Tec-9 around, but achieves very little with it and it gets crushed anyway. 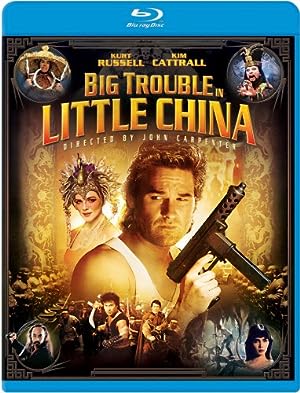 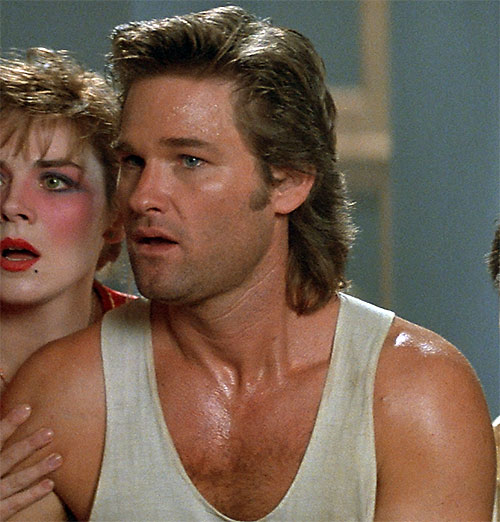 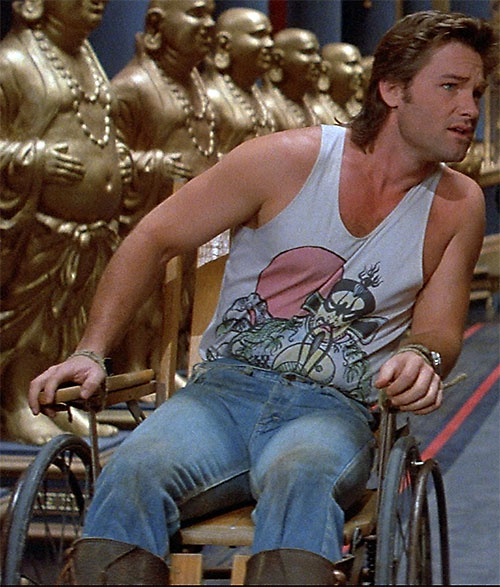 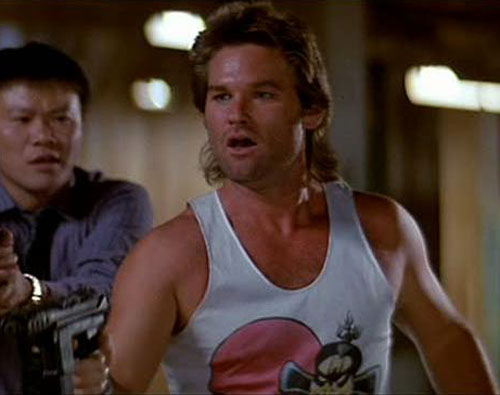