Mr. Weele doesn’t seem to have any special skill beyond basic business management. He does have shady contacts, though – people who know people.

Weele is an aggressive and underhanded man, but his resolve is fragile at best. He seems to have strong depressive, or perhaps bipolar, tendencies.

One panel implies that he has become a capable car mechanic.

His signature vehicle is a 15 feet high disc in heavy gauge steel. It has an inner cockpit that stays level, whilst the outer part of the disc rolls on twin molybdenum steel threads. The Big Wheel can crush ordinary cars without slowing down any.

It can also cling to vertical surfaces, rolling at speed up or down buildings. Perhaps it uses the same sort of suction cups in the early Beetle body armours  ?

Lateral nacelles each contain a nest of weapon systems. These include hydraulic waldo arms with pincers – plus twin machine guns (likely in .30), and recoilless rifles. The arms are strong enough to batter a car aside in one swipe.

The Big Wheel is well-armoured, and watertight. The vibrations it gives off when operating tends to detonate missiles just as they’re about to impact.

On the other pincer, the high centre of gravity means it can be tipped over if hit high and with sufficient force.

Some appearances give the impression that the wheel can do 125+mph on a good, straight road.

Back in 1978, Jackson Weele hired the Rocket Racer (Robert Farrell) to retrieve compromising documents. Weele was a crooked businessman, possibly in construction, and needed to suppress evidence of his embezzlement. The Racer estimated that what Weele had done could land him in prison for 15+ years.

Farrell stole the documents for $10K (almost 40K in 2018 USD), but held the most important ones and demanded $10K more for these. He bullied Weele as he blackmailed him. He also called him “big wheel” to make fun of Weele’s habit to make himself feel big by bossing his workers around. ”Big wheel” is slightly dated US slang for an important person.

Presumably Weele didn’t have the money. He attempted suicide rather than go to prison, but the Rocket Racer stopped him to demand even more money. As he departed, Farrell mentioned that his skateboarding equipment had been built by the Tinkerer (Phineas Mason). This gave Weele an idea.

Enter the lair of the Terrible Tinkerer !

Weele quickly learned where and how to contact the Tinkerer. He explained that he wanted to kill the Rocket Racer, and mentioned the “big wheel” nickname. This inspired the Tinkerer to repurpose a vehicle he had been preparing for a potential client, as Weele was paying right away. 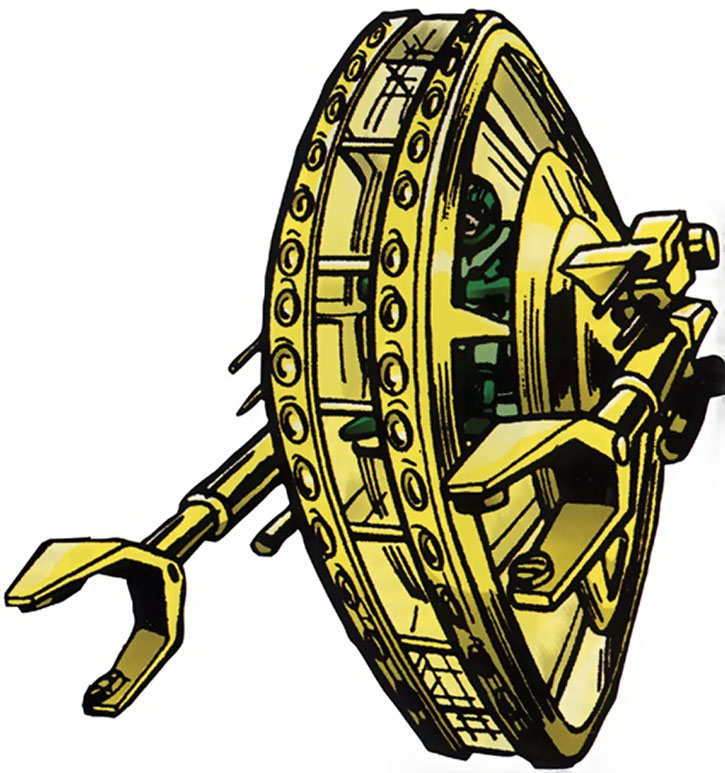 With his powerful and a matching costume, Weele — as “The Big Wheel” — went on a murder run against the Rocket Racer. However, Spider-Man (Peter Parker) stopped Farrell first. In the fray, the inexperienced Big Wheel drove his vehicle right into a river, and vanished without a trace.

Though the Tinkerer had delivered fine goods, Big Wheel’s failure adversely affected his rep. This made Mason even more bitter.

And where it’ll stop, nobody knows

It is only whilst underwater that Weele learned that his vehicle was submersible. He emerged from the Hudson fine, but by then his morale was broken. He admitted to his wife where their money came from, and she left him in anger. Soon, Weele was in prison.

After he left prison, Weele worked as a security guard. Deciding to become a super-villain, Big Wheel attempted to attack Spider-Man (Peter Parker) after the death of the Scarlet Spider (Ben Reilly). He was defeated within minutes.

(This is mentioned in the 2006 Official Handbook . I think this incident occurred in the Secrets of the Sinister Six novel , which I haven’t read. The “Axel” thing, and the nicknames in the Background block, also seem to come from there.)

Secondary sources  assert that Big Wheel was then repeatedly stopped off-panel  by Network (Valerie Martin). He thus ended up in prison again.

As part of his sentence, Weele attended the Vil-Anon program. This 12-step program, similar to Alcoholics Anonymous , was meant to reform jobber  super-villains. Those attending his meetings included Equinox, the Armadillo, the Schizoid Man and Man-Bull. 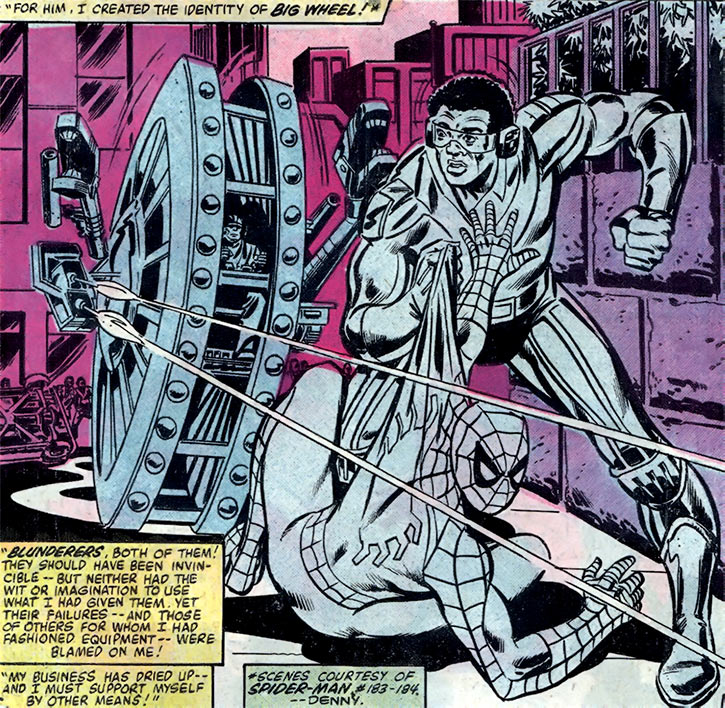 In 2000, the Big Wheel vehicle was seen in the arsenals of the Reanimator. It was used to attack Wolverine (James Howlett), paired-up with a Mk1 Spider-Slayer. These may have been copies of the original machines, though.

By 2006, Weele was out of prison. As part of his rehabilitation, he was to make amends toward Spider-Man. Thus, he attempted to help him stop Stilt-Man. But the incompetent Big Wheel just got in the way and was easily defeated by Stilt-Man.

Wanting to give a chance, Spidey let Big Wheel “help” stop the Shocker, but Weele again made a mess of it.

During the fight, Big Wheel had crushed a bunch of parked cars. Though Weele was appalled by such collateral damage, jaded New Yorkers thought that this had been great spectacle. They cheered him.

Big Wheel took this opportunity. He joined monster trucks shows with his vehicle, and apparently became popular among fans. One panel implies that he then trained as a mechanic to more fully join the vehicular spectacle industry. Weele seemed to be working maintenance on some sort of NASCAR-like car.

Glad to have found a suitable job, he spent much of his free time touring prisons. There he gave speeches about rehabilitation and the 12-steps Vil-Anon program. He convinced at least one minor villain, Hypno-Hustler, to try it and reform.

In 2007, a smaller vehicle looking like the Big Wheel, capable of floating on water, was glimpsed. The man at the controls likely was Jackson Weele. From context, it is *possible* that he was helping the police intercept criminals in a power boat.

A few months later, the Rocket Racer used a Big Wheel vehicle while working as a mercenary for MODOK. However this model was much larger and had markedly bigger guns. It was destroyed when it crashed into a dragon cruiser of the Mandarin.

In 2008, Jackson Weele bought a vintage, authentic Iron Man Mk2 chestplate. He then sold it to the Tinkerer. It is *possible* that he was attempting to make amends for having damaged Mason’s reputation decades before. However, he was soon arrested by Iron Man (Tony Stark) and Spider-Man for having trafficked in weapons. 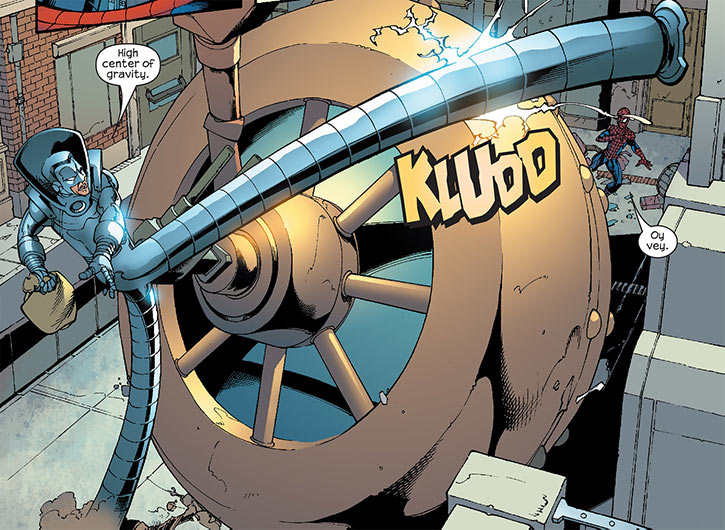 Later on, Weele was seen in prison among other no-name Spider-Man villains, such as Larcenous Lil or the Legal Eagle. He had mentioned that he “couldn’t afford” to go back there, so it seems likely that going back inside cost him his job(s).

This may be why he returned to being Big Wheel and took a mercenary contract against the Ghost Riders (Johnny Blaze and Danny Ketch). He performed well against them, but they were essentially indestructible. His Big Wheel was demolished and Weele was subjected to the Penance Stare.

In 2011, Big Wheel was stopped in unknown circumstances by Gravity and Firestar, and arrested.

In 2015, Big Wheel was among those blackmailed by the Moon Hollow community. This tiny, idyllic village was populated by the wives and girlfriends of small-time costumed villains. 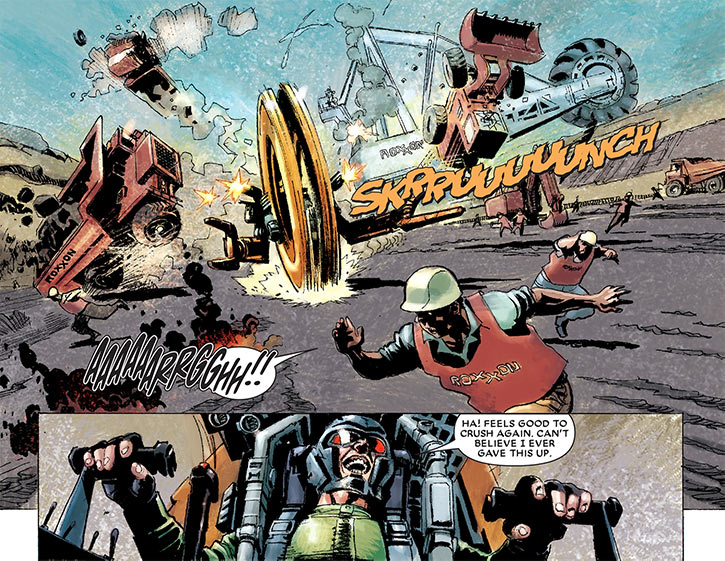 Many of those had been beaten and abused by their companion – and/or had done time because of them. They faked being kidnapped to extort ransoms, and used the money to build a new, safe life away from their men. Which lady was associated with Jackson Weele is unrevealed.

To pay the “ransom”, Big Wheel kidnapped a breeding pair of alpacas . Spider-Woman (Jessica Drew) intercepted him and ordered him to bring the alpacas back, but she then had to leave in a hurry. She discovered the Moon Hollow scam, but agreed to keep it a secret.

In 2016, Big Wheel was among motley mercenaries who intercepted Deadpool and his Mercs For Money. The Big Wheel easily crushed Slapstick (Steve Harmon), but it then collided with the Orb’s motorcycle. Covered in burning gasoline, the Big Wheel drove off the mountain road the fight was taking place on.

The appearance of the Big Wheel vehicle varied over time, but it likely was just artistic license. Or it’s simply because it was rebuilt several times, reusing the complex part (the stabilised wheel hub/cockpit) but building new outer structures.

Weele is an unimpressive man, short and rotund. He must wear glasses at all times, but the visor of the costume is a prescription one.

Big Wheel is a loser, something of a bully, and has terrible morale. One get the impression that he’s actually depressed, but tries to compensate by bossing people around, stealing money and trying to make himself look big. Yet it all came down collapsing on his head. 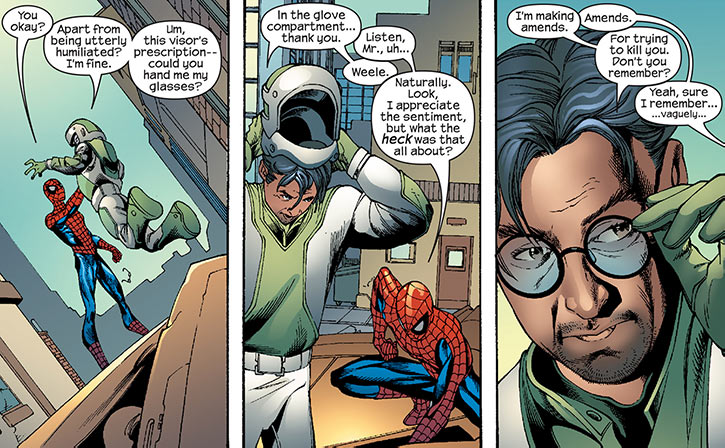 Weele came to sincerely believe in the Vil-Anon program, and tried to spread the message of recovery. He no longer acted like a villain, and became lucid as to his dismal competence.

Then he was back to acting as a violent mercenary and criminal, buoyed by the feeling of power he had in his Big Wheel. Which does reinforce the notion he may have some sort of bipolar disorder, or a comic book version thereof. He tends to alternate between grandiose threats and statements of power, and being utterly dejected if not suicidal.

What made him a criminal again is unclear, apart from writer’s inertia. Perhaps it was a matter of being off his meds if he indeed is psychologically vulnerable.

“Do I see your fearless façade vanish now, fool ? Will you cry and beg for me to halt my unrelenting barrage ? Beg, Racer… beg, and perhaps I will be merciful !”

“You pushed me to the wall, mister… now I’m pushing back ! Nothing’s going to stop me – not ’til I’ve crushed you to a bloody pulp ! Go ahead Racer, run for all I care. Wherever you go, I’ll follow you !”

I could see him fighting Nightwing (Richard Grayson), who has a taste for muscle cars and bikes. That would make highway duels as well as city duels possible.

The Big Wheel looks like it weighs about 12.5 tons, which is 9 APs. However, if hit high, it may tip over due to its high centre of gravity. The Big Wheel is considered to have but 6 APs of mass if such an assault can be mounted (as a Planned Knockback Attack).

1 RAP is sufficient to tip it to the side. At which point it’s over for Weele.

When the Big Wheel runs over something, it simply uses its STR to attack. In most cases it will be used for both AV/EV as it will be done against an unmoving obstacle. 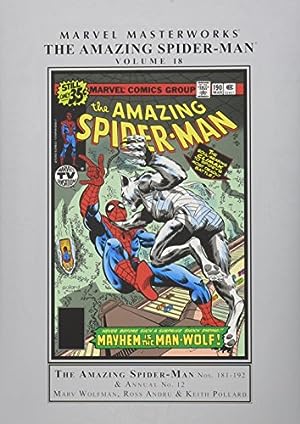 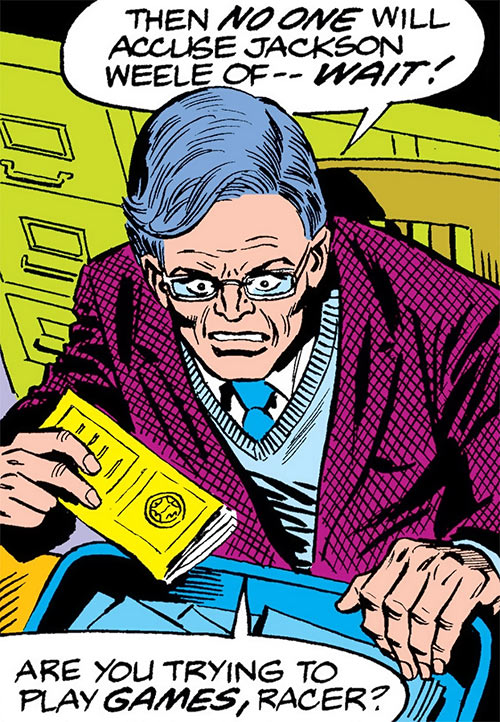 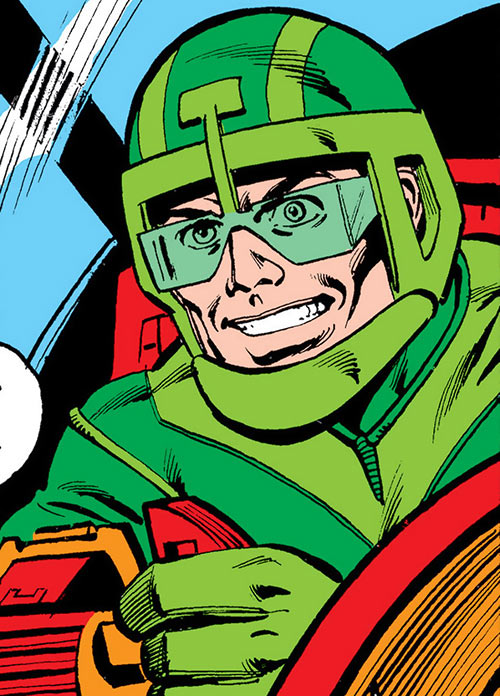 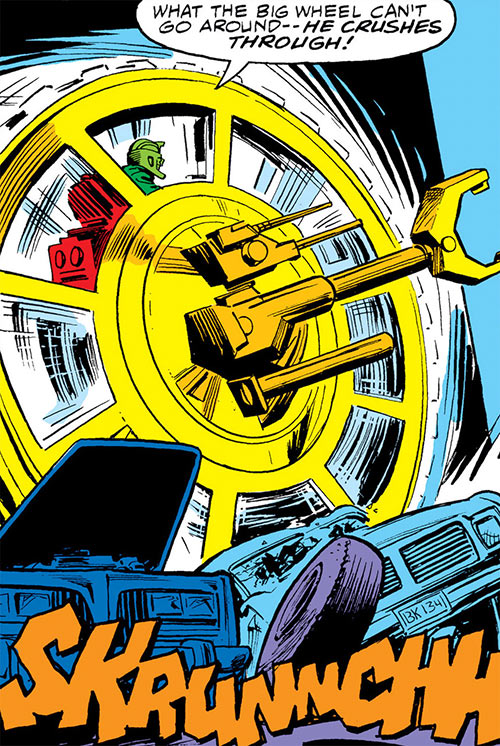