This obscure character only appeared in one 1947 Green Lantern adventure.

We occasionally write one of those. Beyond the historical interest :

Green Lantern Alan Scott was retroactively established as having been based in Gotham City during the 1940s.

This specific story takes place in all-White picket-fence suburbs, and GL must fly there. Therefore, Hale University likely is on the New Jersey mainland, North of the Gotham Islands.

This isn’t an area that appeared much in modern Gotham City stories. With the notable exception of one era of Robin (Tim Drake) and Spoiler (Stephanie Brown) during the Chuck Dixon years. 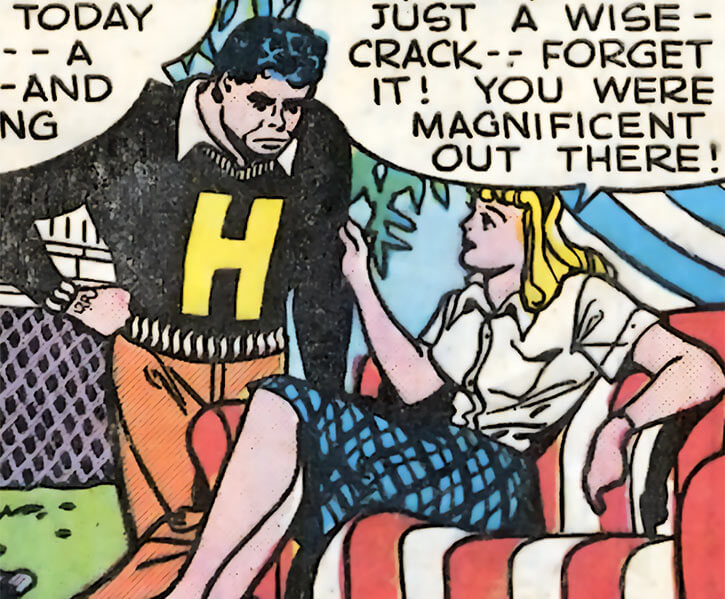 One gets the impression that he was also doing okay with his academics. 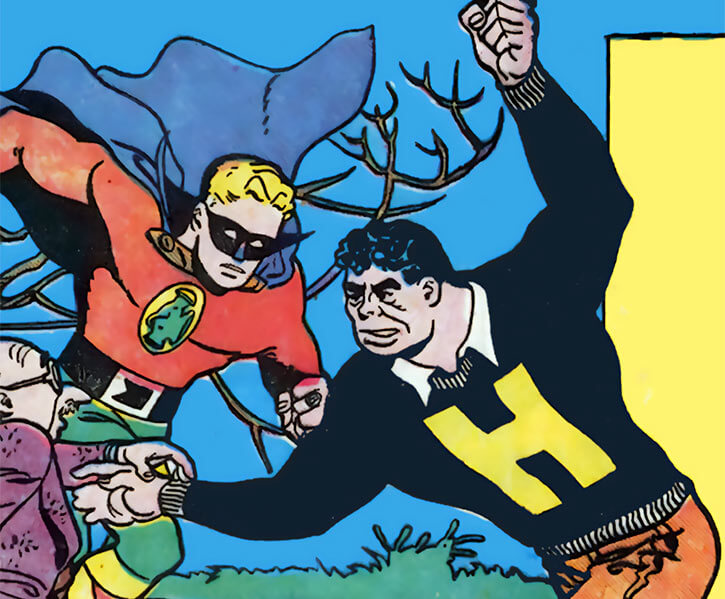 In 1947, star football fullback Bill Barry was used as a catspaw by Professor Perkins.

Perkins was a history teacher at Hale University. He needed a diversion to cover for the thefts he had planned for his hired thugs. Barry apparently considered him a friend.

One of Perkin’s accomplices insinuated within Barry’s earshot that the star player was a throwback to an early form of man. This hurt the athlete’s feelings, and drove him to ask Professor Perkins about early homo species.

Perkins subtly manipulated Barry into believing that he was indeed some sort of evolutionary throwback, prone to reverting to protohuman behaviour.

The story is a bit easier on the suspension of disbelief if we assume that Professor Perkins had weak hypnotic powers. Which might also pave the way for his return.

Perkins tells Barry about the “Piltdown Man”. Some years later, the 1912 Piltdown “fossil” was proved to be an elaborate fake. But back then it was believed to be the mythical “missing link”, especially in the UK.

Albeit nonsensical, both the ideas of a “missing link” and of an “evolutionary throwback” remained popular in comics until the 1970s or so. One obscure Hulk villain is called the Missing Link, and the Bill Barry story somewhat resembles the Paul Lorenze story.

(It’s also part of Deathbird’s and Deathcry’s backstory. But who knows how Shi’ar mutations work, eh.)

Confused, he started intimidating people away, stealing raw meat, living in the wilderness, talking in mangled English (as the Piltdown Man most certainly did !) and the like.

Professor Perkins summoned Green Lantern (Alan Scott) to stop Barry. He also had his henchmen start fires near locations where Mr. Barry was spotted. That was to build Barry into a threat everyone would focus on.

However, Barry’s girlfriend Doris Dale approached Scott. She half-convinced him that Bill wasn’t the bad guy.

Bill Barry overheard the thugs, and went to Perkins’ home to execute him like a “Piltdown Man” allegedly would. But Green Lantern broke the conditioning with his magic ring, then arrested Perkins.

Doris Dale and Bill Barry soon married, and put this strange incident behind them. 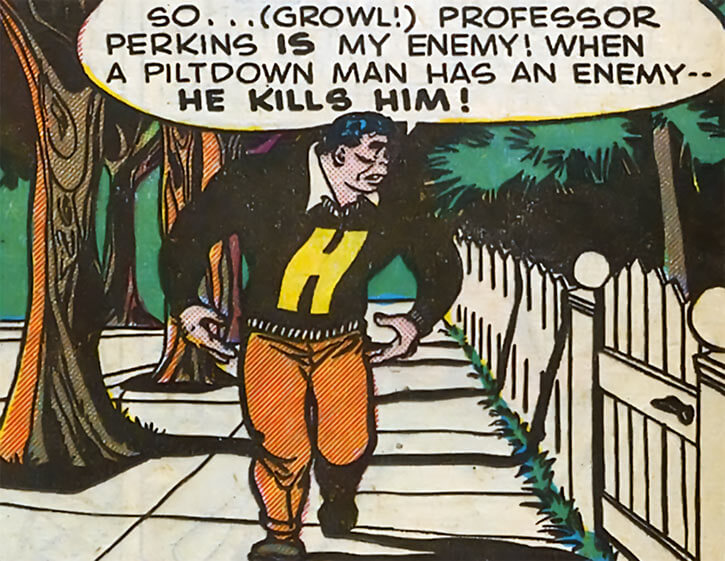 A big guy with a vaguely anthropoid physique.

He apparently evoked a popular sculpted bust rendering of the “Piltdown Man”, which you can find in articles about the hoax. Say, this history.com one  .

Bill Bary wears the typical frat student uniform of this era, with a huge eta on his jumper.

Barry seemed to be a nice feller. Despite his brutish physique, he seemed to be the sensitive, altruistic and romantic sort.

“I’m not like other people now ! If they find me, they’ll hunt me down — like a wild beast ! I’ve got to get away from people…”

Ain’t no reason to assume some version of this story didn’t take place during Green Lantern (Alan Scott)’s demobilisation-era career.

Stats are arbitrary, as this character sees little action.