Cannibal Catch and the Wanderers are two excruciatingly minor mercenary groups in the Marvel Universe. They appeared in but one Nomad/Captain America storyline.

They get short profiles because they occupy a grey space between stock, faceless thugs and “named”  characters. They’re still generic, but they get a code name, a gimmick, an individual visual and are a pip above generic elite muscle in competence.

As such they could be useful in stories where the hero(es) are closer to action heroes than to super-heroes.

Billy is an athletic, muscular soldier type who specialises in crossbows and knives.

He demonstrated enough accuracy to cut a taut rope with a crossbow bolt from a moving vehicle. Though he’s a White guy he seems to have a Native American warrior theme.

Like the rest of the Wanderers Billy prefers having situations turn into a brawl rather than a gunfight. This is presumably to avoid severe wounds.

The Wanderers are a small team of street-level mercenaries. In 1993 they were hired by Doctor Faustus, who was then attempting to become the kingpin of Florida. The Wanderers captured the vigilante Nomad (Jack Monroe) while he was drunk and delivered him to Faustus for brainwashing.

They then accompanied their employer during an assault on the Slug’s place. The Wanderers defeated the rival mercenaries of Cannibal Catch in a brawl. But they then ran into Captain America (Steve Rogers), with predictable results.

A confident, laconic tough guy with what seemed to be a Southwestern accent and diction.

“We got hired t’bring you in alive, Jack.” 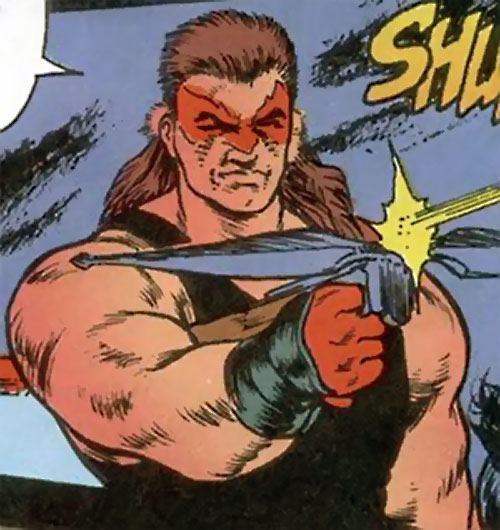