Thunder Force was a 2021 superhero comedy movie on Netflix. It received poor reviews, but that’s irrelevant to our work.

This profile has S P O I L E R S about the movie.

Emily Stanton created a genetic formula that bestowed pre-set powers in individuals. The process was injections or pills taken over several days time.

Emily gave herself the power of invisibility. She was also meant to have superstrength, regeneration, and super-durability. But these were instead taken by her old friend, Lydia.

Ms. Stanton may have also created a formula for superspeed.

Her daughter Tracy gifted her a high-powered taser to give her an edge. Bingo uses her invisibility to blindside her opponents, hitting them while they’re flat-footed.

Both her and Lydia, the other half of Thunder Force, wear bullet-proof super-suits. Emily’s company made these suits. It has the key to their car built-in, plus a radio communicator. Oh, and it can play music, of course.

In my life, everyday is Frey-day!

In March of 1983, a massive pulse of interstellar cosmic rays struck the Earth and its population. This triggered a genetic transformation in a select few, unleashing unimaginable superpowers.

Unfortunately, these superpowers were only unlocked in rare individuals who were genetically predisposed to be sociopaths. These new super-humans came to be known as “Miscreants”.

Chicago, 1988. A blast of pure, crackling, blue energy destroyed a passenger train. Emily Stanton’s parents were on that train.

Her parents, both geneticists, were working on a way to turn regular people into superheroes. This would give normal people the ability to fight back against the Miscreants. Emily vowed on that day to make it her life’s mission to stop the Miscreants.

She’s not a nerd. She’s smart, there’s a difference!

Emily attended Whitman Chicago Unified School, where she was bullied for her high IQ. Another girl in her class, Lydia Berman, took up for her. They became best friends.

The two remained BFFs through high school, class of ’94, and college.

Lydia grew to be a tough, blue-collar, all-night partier. While Emily remained focused on continuing her parent’s work. Lydia’s relaxed lifestyle caused friction when Emily realized she couldn’t count on her.

There was a brief argument when Emily refused to unconditionally forgive Lydia’s mistakes. The two friends parted ways. 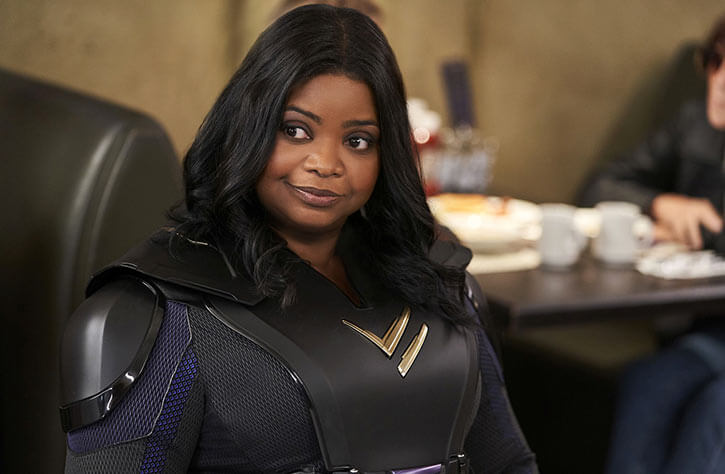 On the night of their class reunion, Lydia went to Emily’s office building. Lydia was wowed by Emily’s success but ultimately spilled beer on her.

Left alone for a moment, “Don’t touch anything!” seemed an invitation to touch everything. Lydia was accidentally injected with Emily’s brand new super-formula.

So, Fate had decided, Lydia and Emily would work as a crime-fighting duo. Lydia gained super strength while Emily got invisibility.

“Thunder Force” became the name of their duo.

They took the purple Lamborghini out for their first night as a crime-fighting team. Allie, head of security at Stanton 4.0, and Tracy, Emily’s daughter, monitored them from the HQ.

They stopped a Miscreant called The Crab and his crew from robbing a liquor store. After that, they got real media coverage and started crime-fighting all over Chicago!

Two Miscreants in particular, Laser and The King had to be stopped. It was up to Thunder Force to bring them to justice. 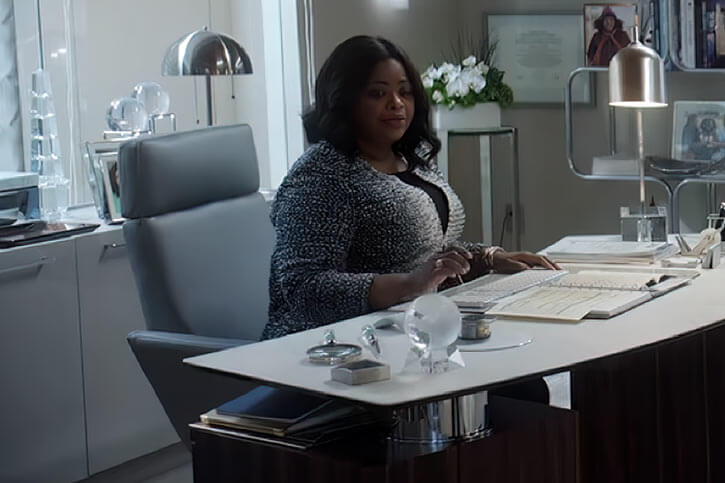 Emily Stanton is an African American woman in her late 40s. She has straight shoulder-length hair.

As Bingo, she wears a black and blue Thunder Force super-suit with a silvered emblem on the chest. Her face is uncovered.

Emily Stanton was changed at a young age by the death of her parents. On that day, she dedicated her life to fighting against the Miscreants. She would bring them to justice. This vow affected all her decisions going forward.

She became a stickler for the rules. Legalistic.

“If I don’t get perfect scores, then I won’t be able to finish what my parents started and give regular people the power to fight bad guys and Miscreants.”

“I’ll do everything in my power to keep you safe. I’m doing this for my parents, for my city.”

“Language.” (Because her teenage daughter is standing right there.)

Lydia: “Nobody wants to get saved by someone named Emily. I got it, you’re ‘Bingo'”.
Emily: “Well, that makes zero sense.”
Lydia: “It’s a catch-phrase and a name all in one neat little package. You can say, ‘Bingo! I go invisible’.”

Tracy: “Due to the electrical charge that it (her taser) imparts, I do believe you’ll become visible when you use it.”

“You’re about to be Thunder Forced !”

Bingo: “Dang it Lydia, this isn’t a game ! I have dedicated my life to stopping Miscreants. And here you are acting like one !”
The Hammer: “I didn’t see you trying to do anything to stop her except disappearing. Which, by the way, you’ve been doing that since before you got your power !”
Bingo: “You know what? I should have both powers because I’d know how to use them.”
The Hammer: “Whatever you say. You’re always right. You’re the special one, not me. Right, Em ?”

“Oh Lydia, sometimes I don’t know if I’m mad at you because you always go crazy or if I’m really just mad at myself because I never do.” 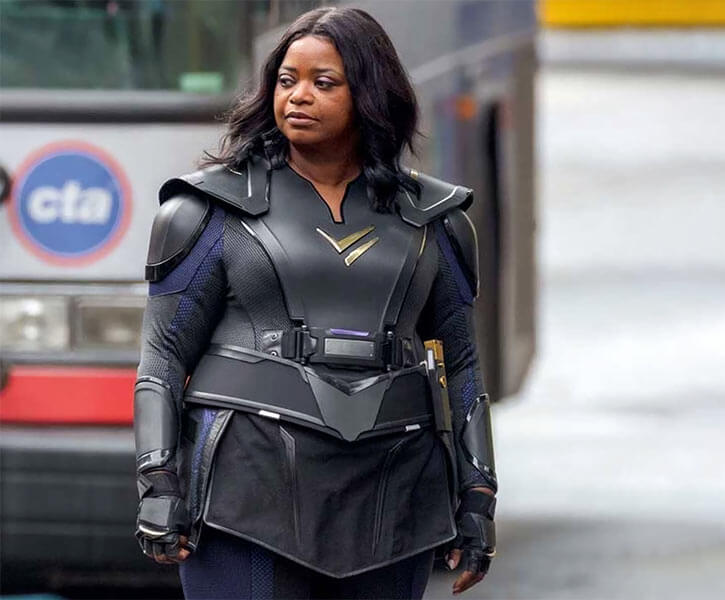 Heavy Taser [BODY 01, Lightning: 05, R#3, Limitation: Lightning has no Range, Cost: ]. This taser has a dial that controls the strength of the shock. Bingo uses full strength throughout the film.

The Stanton building has a sophisticated 17 AP Laboratory. 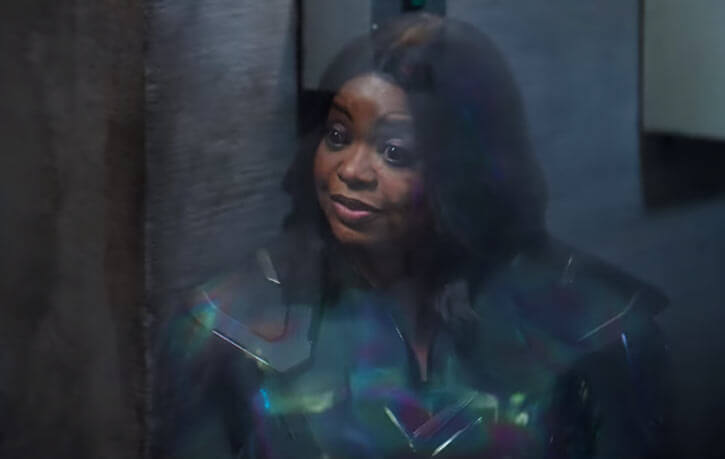 Wealth. Looking online, the cost to build a Laboratory can be more than 8 million dollars. We don’t know how many facilities Stanton has. The building seen is more than just a lab, owning a skyscraper in downtown Chicago can’t be cheap.

She paid for repairs when Lydia threw a city bus into the Buckingham Fountain  . When Lydia guessed it must have cost a million bucks to fix. Emily tells her many millions, but not to worry, she paid for it.

So, 10 million a low estimate of her companies’ worth. In 2008, this fountain was renovated to the tune of $25 million! Since Emily wasn’t worried over the price tag. I think this would have to be less than a quarter if not an 8th of her wealth. $200 Million seems a comfortable estimate.

I’m assuming Emily got more boxing training than the 33 days Lydia got.