This small profile is meant to be read after two other entries :

Bird-Man uses the same winged, flying suit as his predecessor.

He seems to have basic brawling experience, plus presumably criminal experience.

He can fly within a large city without hitting anything.

He can fog a mirror.

And… that’s about it. 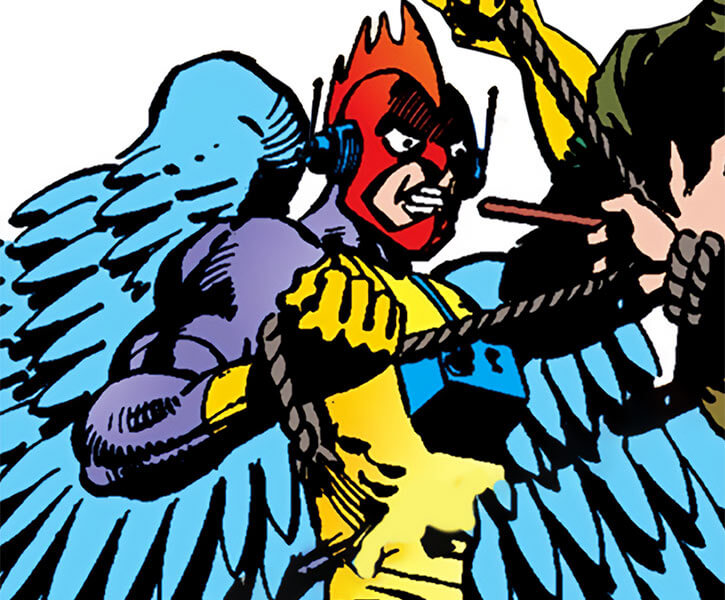 DiBacco was one of three greedy thugs recruited by Death-Stalker (Philip Sterling).

These were issued special costumes to become the new Ape-Man, Bird-Man and Cat-Man.

They ran into the Black Widow (Natalia Romanova). However, it was three against one and she was hampered by her heavy (but nice-looking) dress. Ape-Man and Cat-Man thus captured Murdock.

Meanwhile, the Black Widow took Bird-Man down, with the help of legal secretary Becky Blake. One of Romanova’s blows wrecked his flight systems. He was arrested by the NYPD.

This saved Bird-Man’s life. Death-Stalker murdered Ape-Man and Cat-Man rather than pay them.

After leaving prison, DiBacco apparently resumed his criminal career. Whatever he did, it was entirely off the radar.

(Heh, it’s even possible he was never able to get his flight unit repaired.)

Yet DiBacco still felt concerned about the Scourge of the Underworld. The Scourge roamed the US murdering small-time super-villains. Bird-Man thus attended an underworld meeting to organise against him.

But it was a trap, and DiBacco was shot dead along with the others. 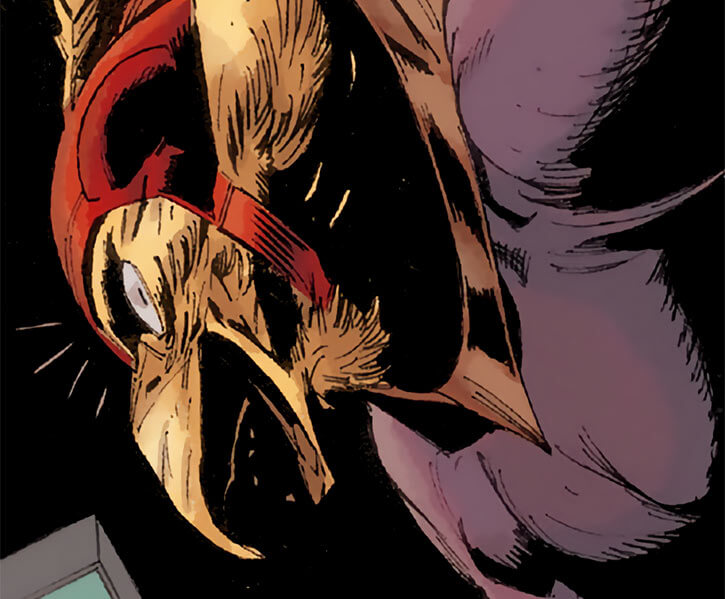 In 1998, Arnim Zola used cell samples to experiment with weak quasi-clones. A Bird-Man clone was among those.

All such clones were destroyed by Deadpool.

The dead start to walk in their masquerade

In 2009, The Hood (Parker Robbins) used Dormammu magic and human sacrifices to resurrect many of the Scourge of the Underworld’s victims. Bird-Man was among their number.

The resurrectees were altered by demonic energies. Bird-Man in particular seemed mutated and animalistic.

He and the others were sent after the Punisher (Frank Castle). They were told that Castle was the Scourge who had killed them.

Bird-Man survived the subsequent fights. Mostly by not really joining them.

It is possible that he continued to serve the Hood. A Bird-Man is seen in one scene, though I suspect it was another guy from another version of the Unholy Three.

A random street bully. Threatening when on top of a situation, manifestly out of his depth when not.

BIRD-MAN SUIT [BODY 02, Claws: 04, Flight (Winged): 06, Radio communication (includes video): 12, Thief (Stealth): 03, Limitation: Thief only in flight, and only for audial stealth]. It seems that he lacked the training to use the Claws (the talons), though.

It’s impossible to assess the resurrected, GrimDarkGoreShock version of Bird-Man. But we can observe :

He fell under the control of fellow resurrectees Letha (Helen Feliciano) and Titania (Davida DeVito). DeVito uses her mind control powers to keep Bird-Man as their emergency evacuation ace-in-the-hole. Like a skyhook.

The upper envelope for his stats is likely those of the mutated Henry Hawk. Though there’s no reason to assume a high DEX.

Like the mutated Hawk he may have avian senses.

And it’s possible he has more demonic-tinged powers. Heh, maybe he’s a vrock  .

None demonstrated. At all.