Hawk seemed to be an experienced small-time criminal.

He had some skill with handguns.

Unlike the others, he didn’t seem to have either an unusual speciality or military experience. 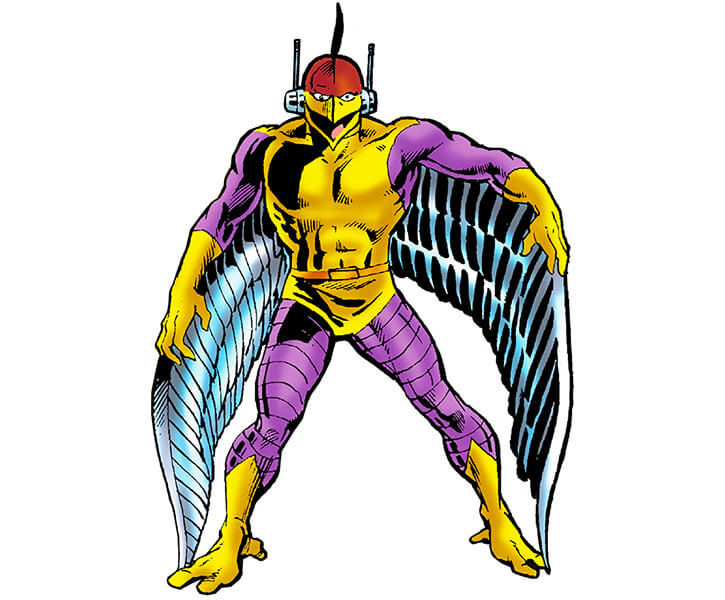 The Bird-Man suit had the usual radio headset and the chest camera.

It also had wings. Flapping them with one’s arms somehow allowed for flight. What tech was used for this is unrevealed, but it emitted little noise.

The aerodynamics could get weird. Bird-Man is once seen flying sideways (though it likely was a weird skidding manoeuvre). He also repeatedly stays aloft with little if any forward motion to provide lift.

This and the lack of noise suggests some form of anti-gravity tech.

Lacking other combat assets, Bird-Man usually carried a handgun. At first it was a dated, compact piece in an older calibre. He eventually switched to a .45 ACP semi-auto.

At first, with his arms busy flapping, Bird-Man had no means of prehension. He twice had to carry an attache case using his teeth.

Prehensile, avian “feet” were then added. Presumably, these gadgets had teething issues, preventing their use during his earliest outings.

These talons were strong enough to carry an adult. They presumably were cybernetically operated. They were soon equipped with sharp ends, though doing this sort of swooping attack isn’t easy. Plus, swooping is bad.

Once the talons became reliable, the wings’ tech was also strengthened. Before that, Bird-Man couldn’t carry much in flight. Maybe 40 pounds (18Kg.) top.

Bird-Man was then turned into a superhuman by Count Nefaria. He thus became a mutate with an avian appearance.

There are but a few panels depicting him in this state, but he :

Back in 1965, Henry Hawk was working as a small-time bookmaker. He was taking small bets on horse races. Hawk quit shortly after the Organizer called him.

Howbeit, a Marvel secondary source  notes that the Bird-Man suit might be based on the Vulture technology of Adrian Toomes.

If this hypothesis is correct, *perhaps* Henry Hawk was a tester for Toomes, helping him refine his design by risking life and limb. Thus allowing Hawk to fly as Bird-Man without further training.

(The Vulture debuted in 1963. He only had four appearances when Bird-Man debuted. So the timing seems reasonable.)

If you want to get weird, Hawk might have ties with Red Raven. Perhaps he’s a Bird Person born without wings and who fled Sky Island with some tech goodies during the 1950s. Or some such far-out scenario.

Henry Hawk has an aquiline nose and piercing eyes.

He also had male-pattern baldness. Thus, when in his civvies, he wore a hat. This no longer was the norm by 1965, though it wasn’t rare either.

Bird-Man is the only Ani-Man who seemed more human when the team attacked Stark, than when they fought the X-Men. Specifically, his arms no longer were elongated, spindly and partially merged with his wings. 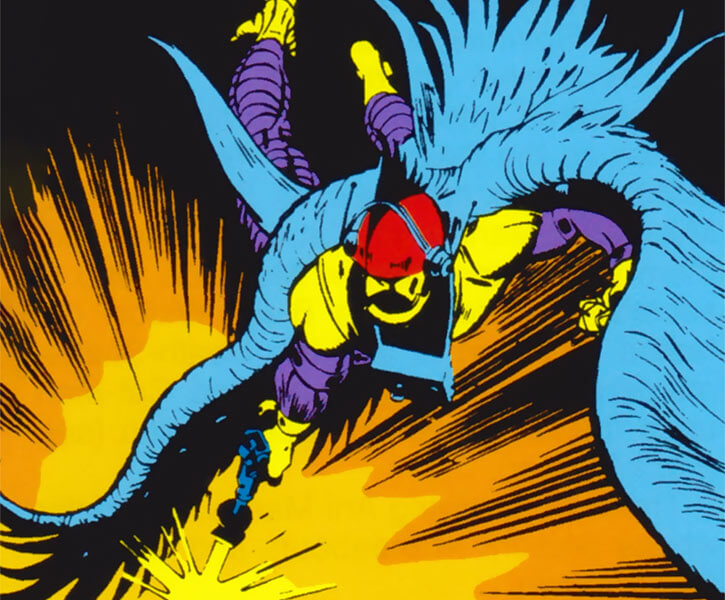 He’s just, like, this guy. He lacked any special mannerism or resolve, though he had experience with being around killers.

When he wielded one of the Exterminator’s T-Ray blastersA gun shooting energy, like in Star Wars, he suddenly acted confident, domineering and cruel. Funny how it works.

Bird-Man tends to fly past his opponents, grapple them from behind, and hold them for one of his colleagues to punch. It’s not a bad tactic, until someone goes for a Dupe Manoeuvre…

Rodeo on bird-men isn’t even a real sport

Whenever Daredevil (Matt Murdock) tried to grab him in mid-air, Hawk knew enough to twist, roll and turn in flight. This forced Daredevil to cling to him, rather than try offensive manoeuvres. Like punching.

This isn’t a quantified attribute of Hawk’s. Anybody with a flying suit and half a brain could do it.

OTOH, you need numbers to solve this in-game. Thus, if a non-flying person pounces atop Bird-Man for some aerial wrestling :

His Stealth rolls will often receive sizeable bonuses. Since people do not generally expect some dude to swoop in from the blue.

Other raptor-like abilities are certainly possible. APs of Telescopic Vision are the first that come to mind. 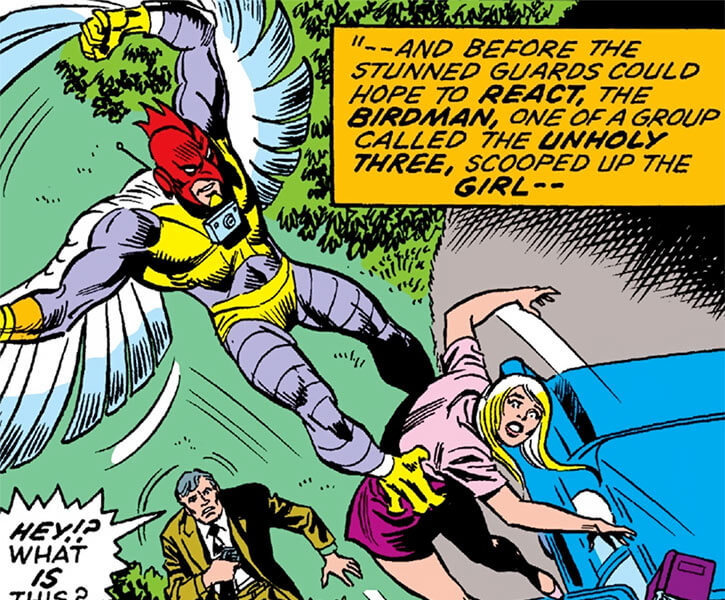 His Stealth rolls will often receive sizeable bonuses. Since people do not generally expect some dude to swoop in from the blue.

Defensive Roll 2, Improved Initiative, others in flight per above.

Other raptor-like abilities are certainly possible, such as Senses (Extended vision).