Bishop is built like a Mack truck and very fast and muscular. His experience in the XSE gives him intensive training and field experience that is part street cop in a very tough neighbourhood, part fanatically dedicated special ops soldier. He’s thus quite conversant with deadly violence and extreme situations.

Bishop’s mutant power is that he can absorb energy and redirect it. Blasting him with energy is thus the best way to give him a new weapon. This can work to a small degree with low-yield kinetic energy and a kind GM. For instance he once spent a few hours under snow, storing the energy of snowflakes falling on him to build up a blast.

As this example shows, he’s quite proficient in the use of his powers.

Being a time traveller from a now much less probable future, Bishop can occasionally manifest a resiliency to changes in the timeline.

Nirvana’s Nevermind clearly is one of the emblematic song of 1991 – when Bishop appeared. But since he comes from the future, let’s have a live cover from 2017 as a soundtrack.

It’s a weird team-up between a high-energy electro-punk-rock French band Shaka Ponk, and Classical violonists the Berthollet sisters. Plus some local gospel singers, because at this point why the eff not. It starts quiet to feature the strings and the vocals (by Frah (with the beard) and Samaha (please stop ogling)), then gets much louder.

Lucas Bishop was born in the 21st Century A.D.. His alternate timeline governed by violence and ruled by fear. The mutant-hunting robots called the Sentinels had taken control of North America.

In this timeline, Professor Charles Xavier and most of the members of the mutant team he founded, the X-Men, were killed by the Sentinels. Mutants were killed or were imprisoned within “mutant relocation camps.” The whole world had been almost shattered by war, and one continent rendered inhabitable due to radiation.

Bishop and his sister Shard were both born in one of the “mutant relocation camps.” Like other mutants they were branded with “M” tattoos (or painting, accounts vary) over their right eyes for identification.

Eventually, “normal” human beings and mutants joined forces and overthrew the Sentinels during the “Summers Rebellion.” However, “normal” humans still resisted coexistence with mutants. Furthermore radical terrorist groups of mutants, such as the Exhumes, made war on “normal” humans. 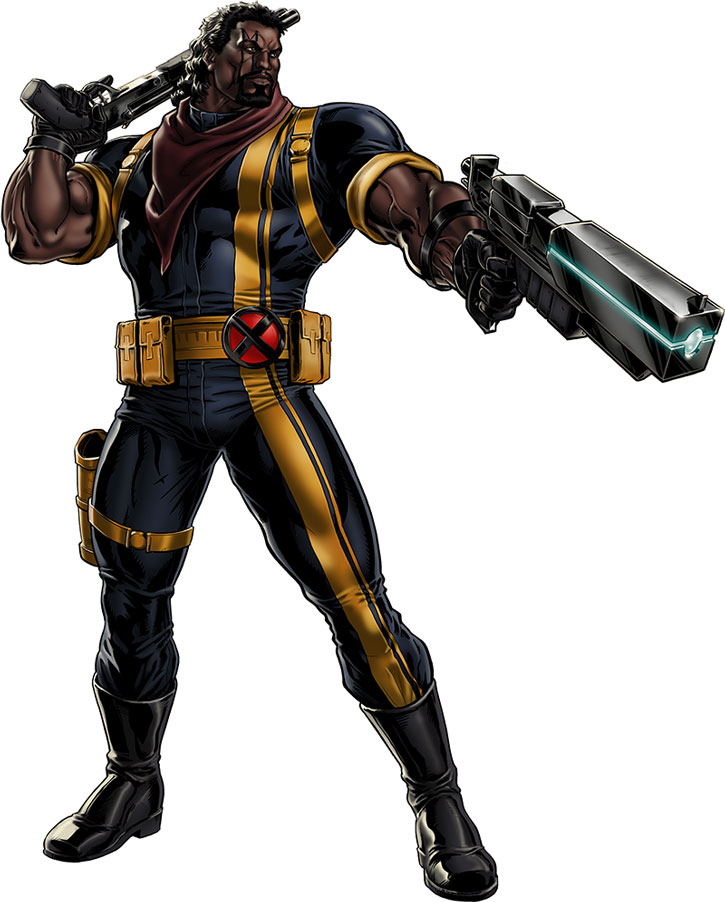 The XSE was named after Charles Xavier in honor of his dream of peaceful coexistence between mutants and “normal” humans. Hecat‘e became the XSE’s commanding officer.

Since their parents had apparently died, Bishop and Shard lived with their grandmother, who was herself a mutant, until she died. Their grandmother told them stories about the heroism of the X-Men. She instructed them to follow Xavier’s dream of peace between mutants and the rest of humanity.

One day, when Bishop and Shard were both still children, two XSE members cam in pursuit of Virago, a member of the Exhumes. When Virago took Shard as a hostage, Bishop leapt onto Virago’s back, making her release his sister.

Infuriated, Virago was about to murder Bishop when Sureshot shot her dead. Until then, Bishop had regarded the XSE as his enemies and the Exhumes as heroes, but from then onward he wanted to join the XSE. 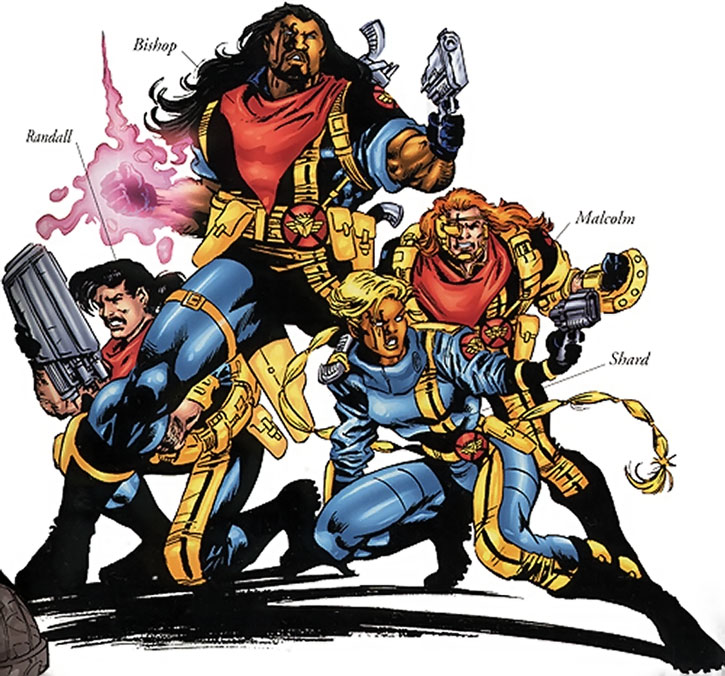 Impressed by Bishop, Amazon and Recoil offered Bishop a position in the XSE. Bishop accepted on the condition that Shard be accepted in the XSE as well. By now Bishop’s own superhuman power had manifested itself. Thus Bishop and Shard became cadets at the XSE Academy under Hecat‘e’s supervision.

Among the other members of their class was Bishop’s future enemy, Trevor Fitzroy.

Eventually, Bishop and Shard became officers of the XSE. Shard, however, became Bishop’s commanding officer. Bishop contented himself with a lower rank so that he could work the streets alongside his friends and fellow XSE officers, Malcolm and Randall, as an homicide cop.

Fitzroy eventually turned criminal and was imprisoned. He broke free and escaped with other mutant criminals back through a time portal to the X-Men’s own time. Bishop, Malcolm, and Randall followed, even though they were aware they had no means to return to their own time.

During their various attempts at stopping the felons, the three XSE enforcers met the X-Men, and couldn’t believe they were actually the legends from history. They fought them ferociously as well as the criminals they were pursuing, seeking to tear down what was surely a deception.

Ultimately, Malcolm and Randall were killed in a deadly firefight, most of the criminals killed, Fitzroy escaped and a badly wounded Bishop only survived due to the intervention of the X-Men.

Bishop finally accepted his time-tossed condition and the X-Men as genuine. He went on to operate as a apart of the legendary team he had idolized since his youth. He fights with conviction, as he knows exactly what lies in the future that the X-Men are fighting to prevent.

There were, of course, problems – Bishop’s tough methods from a dark future weren’t suited to the X-Men normal modus operandi. Furthermore Bishop knew that the X-Men had fallen, thus allowing for the world-shattering war to take place, due to a traitor in their midst.

Bishop long suspected the traitor was Gambit, since in his time period a very aged Remy Lebeau was the sole survivor of the X-Men and known as “The Witness”. This made for tense relations with Lebeau.

It was however ultimately discovered, during the Onslaught crisis, that the traitor was professor Xavier. Only Bishop’s presence, a temporal anomaly, allowed the X-Men the survive this crisis.

Bishop is an intense, dedicated, utterly serious soldier-detective. Although decades removed from his jurisdiction, he’s still a tough cop at heart. He stands steadfastly behind his badge and oath and never rests until justice is served.

He’ll rely both an analytical intelligence and methodical analysis, and on hard-hitting, ruthlessly efficient tactics intended to solve situations with no regard for prejudice to the opponents. However the X-Men have worked long and hard and having him downgrade his level of expediency in combat.

Bishop has very little time for levity and humor, and rarely relaxes.

“Hit the floor and drop your weapons !”

The X-Universe-specific elements in Bishop are not *that* strong. The character can work in any setting where :

Since everything in the DCU officially has to revolve around Superman, he could come from a future where Superman didn’t come back after being killed by Doomsday. There, most everything on the planet was wrecked an killed by the monster.

A small group of energy-absorbing metahumans ultimately managed to recover Superman’s corpse, absorb the energies left inside and throw Doomsday away from the planet. They became the sole police force of a ravaged world where many of the survivors are metahumans enhanced by the Gene Bomb.

Drawbacks:
Exile (voluntary), MIA toward Xavier’s dream, Mistrust (mutant). Bishop seems to have gotten over his Guilt related to the death of Malcolm and Randall.

Bishop’s Shtick (Energy Funnel) allow him to act as the focal point for a Team Attack done by energy projectors – basically all of the Team Attacking characters shoot at Bishop, who absorb and re-channel the resultant energy as one Really Big Blast.

For some reason, Bishop can absorb much more energy in those instances – allowing him to channel Team Attacks where the APs of power used are much higher than his Energy Absorption power. This can be rationalized as more diluted, “slower” energy transfers rather than brutal attacks being directed at him.

This Shtick allows Bishop to add a further -1CS to the enemy’s RV du to Team Attacks tactics ; it only work with energies Bishop can absorb and redirect. This Schtick costs 20 points. Note that Bishop will often spend HPs when doing this.

Bishop has done numerous tricks using his energy absorption powers. Those are represented by his (Minor Marginal) Adaptation Power, with the following Limitations :

In other words, if Bishop can find energy residues (i.e., shortly after an event involving high energies or exotic energies has taken place – GM’s call), he can absorb the traces or duplicate the effect that took place.

He normally can only do it once, but this is not very consistent in the comics – the GM may allow Bishop to use the absorbed Power two or three times at reduced AP levels if that fits the plot.

The best-known example is for Bishop to “tail” a time traveler by reaching the place where the time jump took place, absorbing the residual energy and making a time jump to follow the first traveler.

There has been at least one instance where this Power has been used as a Power Drain. This should be handled as a Trick Power, as per p227 of the Blood of Heroes Special Edition.

Bishop has various, minor powers marking him as a temporal anomaly (Awareness, Detect, Dimensional anchor). Basically it’s hard to change reality around him via timeline alteration, and he’ll *know* something is wrong with the new timeline – for instance during the Age of Apocalypse the new reality’s version of Bishop was aware that the timeline was not “correct”.

The Dimensional anchor involve bits of speculation – I don’t think he was clearly displayed as being hard to chronoport against his will – but it makes sense given the characters and solves the matter of his visibility as a temporal anomaly. 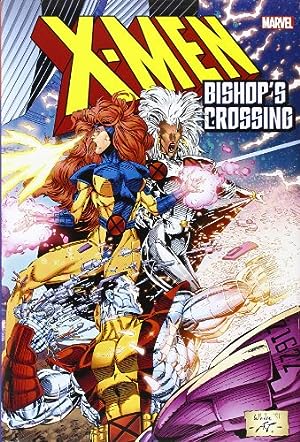 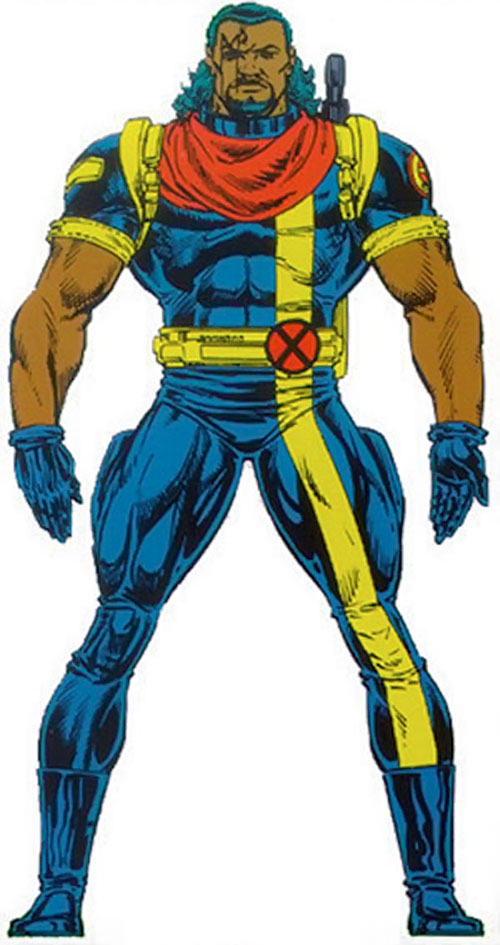 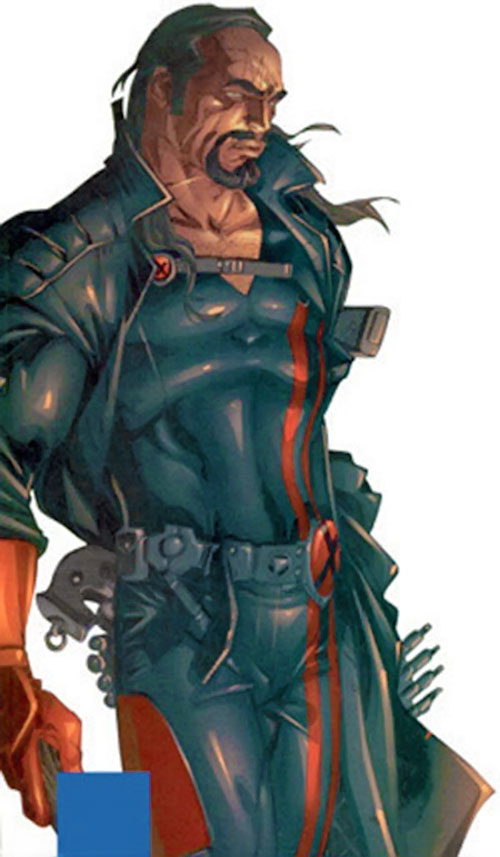 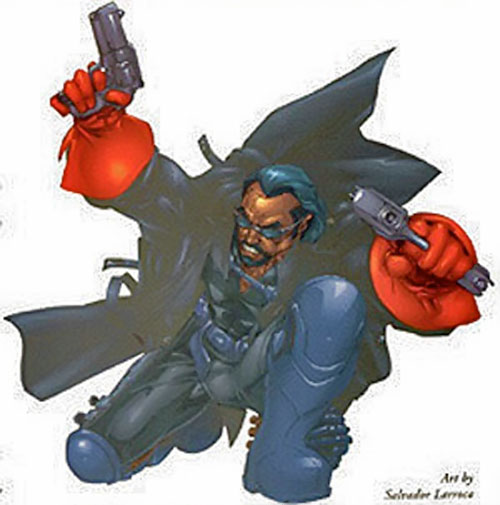 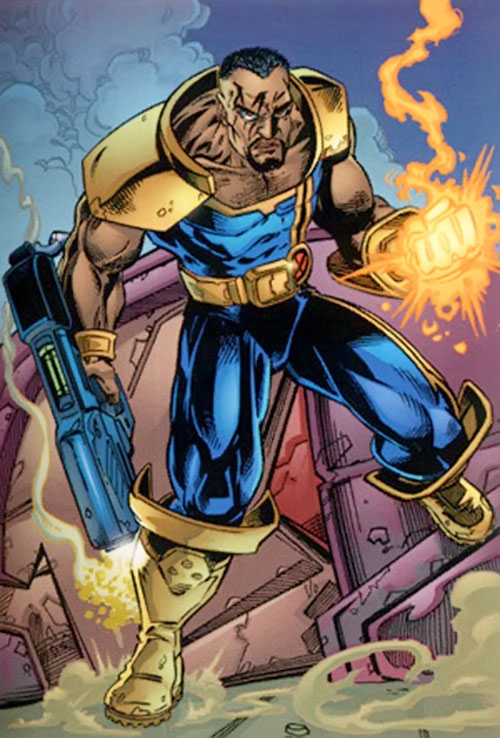 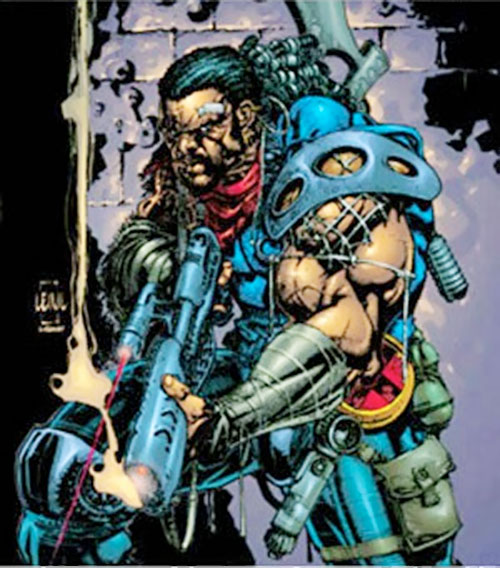 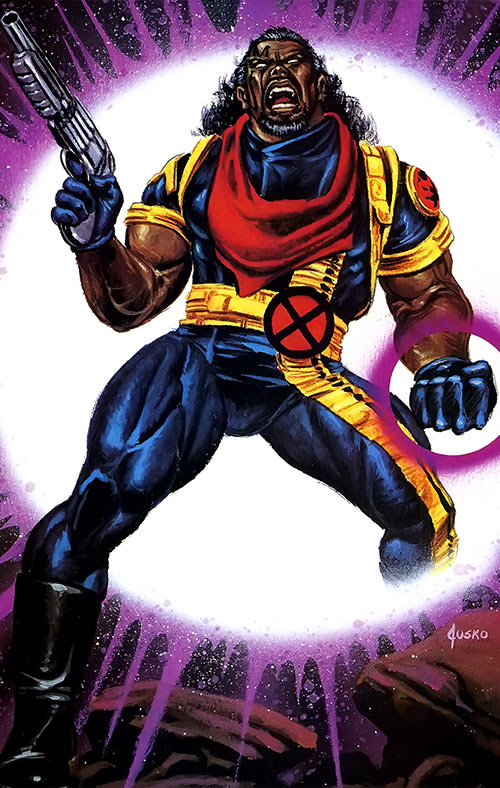