The Black Archer is a skill-type hero and as such enjoys the benefit of a multitude of useful skills. As a former taxi driver he can handle a land vehicle well and has extended his vehicular skills to various air vehicles, as well. He’s very muscular and is an able hand-to-hand combatant.

His main weapon, though, is his the longbow he uses. It comes included with various trick arrows that he himself builds. His engineering skills also extend into other areas such as physics, computers and electronics. Although his skill with the bow is nearly superhuman (he’s also supposed to be the equal of Hawkeye), he can also use other weapons with good proficiency.

Additionally, Archer can be very sneaky when need be. He’s also a colorful personality and dedication, which are useful for a superhero.

Since Earth-712 is a sort of loose parallel of the DC Universe, one possible explanation is that it regularly goes through editorially-mandated, reality-redefining crises. In this No-Prize Hypothesis , McDonald was retconned  into a different character once or twice. For those GMs wanting to use the older versions, here are our notes :

McDonald sports a thick Cockney accent (and yes, he goes “Cor !” at one point), a colourful avian-ish costume with a brown cape-cowl (like the Golden Age Atom’s classic costume), and a crossbow. One of his remarks hints that he has a thing with Lady Lark.

From his performance there is no reason to assume that he’s skilled beyond common super-heroic standards. But he does seem physically durable. In DC Heroes terms, possible tweaks are to lower every Attribute and Skill by one AP, except for his BODY, Acrobatics and Gadgetry.

His crossbow seems standard, and he fires a high-tech-looking bolt that Stuns the Vision after hitting him in the back (EV 08, maybe). He probably had about 25-ish Hero Points at that stage.

In 1975, McDonald has become the Golden Archer, with a yellow and orange version of Green Arrow’s costume. This is a cover identity Hawkeye (Clint Barton) once used on Earth-616. McDonald states that he adopted it to operate on Earth-616 without being confused with Barton.

From that one can assume that he still uses the Hawkeye name and costume on Earth-712, but when later seen on Earth-712 he’s the Golden Archer. He and Lady Lark are an item, though that relationship seems to go better in his mind than it actually does.

He now uses a bow and shoots exploding arrows – and one fails to knock the Vision out, so there are presumably less powerful than the crossbow bolts (EV 06 ?). His “detonation arrow” likely had EV 08, perhaps Combined with Bomb: 04).

His Attributes and Skills are presumably on the same level as before, though his INF and AUR seem to have risen to the levels in the main stats block. He probably had about 35-ish Hero Points at that stage.

One of his remarks strongly imply that he’s a British hero, and he’s said to routinely overreact. His accent his less over the top and is more generically British (and yes, he goes “guv‘nor” at one point and “gorblimey !” on several occasions).

He’s described as brash, cocky and intense but doesn’t seem to actually be too bad at critical thinking.

In short: The man named Wyatt McDonald used to be a taxi driver, but decided to go for a life of fame, adventure and action instead. He perfected his combat skills, both hand-to-hand and the use of weapons, particularly the longbow, and assumed the costumed identity of Hawkeye.

He later changed identity to that of the Golden Archer and became the super team called Squadron Supreme’s first recruit. As part of this growing group he met fellow member Lady Lark and they became a couple.

At one point, the alien Overmind conquered, with the help of the US Army and the Squadron Supreme, the entire Earth. The conqueror was later defeated by the Squadroners. As a rescue program to save the war-torn and destroyed Earth, the Squadroners adopted the totalitarian agenda called the Utopia Program.

During the Utopia Program the Squadron’s old enemies called the Institute of Evil got caught including and were ’reprogrammed‘ (basically brainwashed) to become good and productive citizens instead.

One of the members of the Squadron, the genius dwarf named Tom Thumb, had invented a brain-washing machine called the Behavior Modification Machine. It was meant to reform criminals into productive, law-obedient citizens. Through the correct techniques the victim of this machine could be programmed by any orders (Motivation or IAs in MEGS).

At one point, Golden Archer proposed to Lady Lark who turned down his proposal and decided to leave him instead. Archer, desperate, sneaked out one night, drugged Lady Lark, and used the Behavior Modification Machine on Lady Lark so that she would love him with her whole body, mind and spirit.

Another Squadron member, Blue Eagle, had become a good friend of Lady Lark. He deduced what had happened. Blue Eagle accused the Golden Archer of having used the Machine on Lady Lark in order to make her love him, and the Squadroner’s called Archer to the defense. Archer, ashamed and guilty, admitted to his sinful act and as a consequence had to leave the Squadron.

Lady Lark, whose brainwashing couldn’t be undone, left the Squadron to try to track down the Archer also.

Archer joined his old friend Nighthawk in the Redeemers. He changed his identity into that of the Black Archer. The Institution of Evil, now members of the Squadron, were un-brainwashed by their old foe Master Menace, after which they also joined the Redeemers.

Working inside the Squadron as spies, some of the Redeemers put the Squadron in a situation in which they had to confront Nighthawk and remaining Redeemers. The Squadron was really outnumbered by all the Redeemers (incl. the Institute of Evil) and a bloody battle started.

Although attempts were made to avoid bloodshed, the battle went completely out of hand and many members died on both sides. Black Archer was slain by the Blue Eagle as he was saving his friend Dr. Spectrum from a long fall.

Eagle was himself killed when his ability to fly was stolen by Lamprey. When he fell down on the Earth, landing on Pinball, breaking Pinball’s spine and his own neck. The Squadroner’s stopped the Utopia Program after the many deaths the attack resulted in.

The Black Archer is well-muscled man. He’s clad in a full body suit of black with yellow arms and a yellow strip where an expected string from a quiver would be on his chest. In addition to this he wears yellow adventurer style boots, a yellow belt, a headpiece in black and yellow and two (!) quivers in yellow on the back and with the belt along with a yellow longbow.

The face, now covered with a black moustache and a black beard, is visible below the nose as are the ears. All in all black fits him well and he has the look of a real superhero.

The yellow costume featured below the black one is the costume he wore as the Golden Archer.

The Black Archer used to be, during his Hawkeye and Golden Archer days, all about glamour and fame. As an Errol Flynn  type of hero he was a happy-go-lucky type with strong body language and words.

As the Black Archer he was very bitter, cynical, guilty and regretful. The disillusioned Archer sought amendment for his sin against Lady Lark and therefore joined his old friend Nighthawk in the Redeemers.

His best friends in the Squadron used to be Dr. Spectrum, the Whizzer and his love Lady Lark. Although Wyatt really means good at heart, he occasionally makes the really wrong choices. When he really came to it he was unable to kill his friends.

In all his incarnations he spoke with a lower class British accent.

“To redeem my honor, Joe… the Squadron’s gotta fall. Sorry, but I can’t even let old friendships stand in the way.”

Since the Squadron Supreme basically are carbon copies of the JLA there are two options. Either use the JLA in your adventure or use the entire Squadron Supreme instead. The Black Archer would clearly be a counter-part to Green Arrow.

It could, of course, also be interesting to put the old JLA against the Squadron in a dimension-crossing adventure. In such a scenario Black Archer would probably lose against any incarnation of the Green Arrow (I or II).

This is a Device jury-rigged by Black Archer for use against Hyperion. Black Archer should probably be allowed to use his Expertise in arrow construction to build this and other specialized warheads in conjunction with his Inventor Advantage.
– Ranged Damage 3, Improved Critical ● Descriptors: Piercing, Argonite, Radioactive.

In the case of Black Archer’s bow, I strongly considered making it a Device. However, I arrived at several counter-arguments.

Second, only the freeze arrow seemed really weird, and compared to some of the things that are also Equipment in DCH (such as all vehicles) it’s just not that weird. It didn’t seem worthwhile to build the whole thing into a Device based on just the freeze arrow and acetyline torch arrow slots.

Third, I’m pretty sure his arrows have most of the logical constraints associated with equipment. He has to stock the right sort of arrows, for instance, his bow probably wouldn’t like being submerged, and so forth. He exists in a somewhat gritty, high-tech setting.

His equipment is probably grittier than it would be in an X-men book, and the bar for what passes for “normal” technology in his setting is probably higher. There are several situations in the Utopia book where he realizes that shooting an arrow at something probably isn’t going to do much.

Fourth, I asked myself, “What would happen if you destroyed his bow?” I’m pretty sure the answer is that he would just grab another bow, tighten the fittings, and starting replacing some of his arrowheads with minigrenades, and he’d be back in business. He’d still be the Black Archer even with a storebought hunter’s weapon.

You could even argue that some of his less-used arrows are inventions, which means his usual arrows are all pretty much standard tips of various kinds, grenades, and grappling lines. 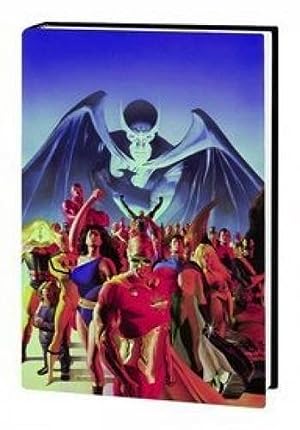 As the Golden Archer : 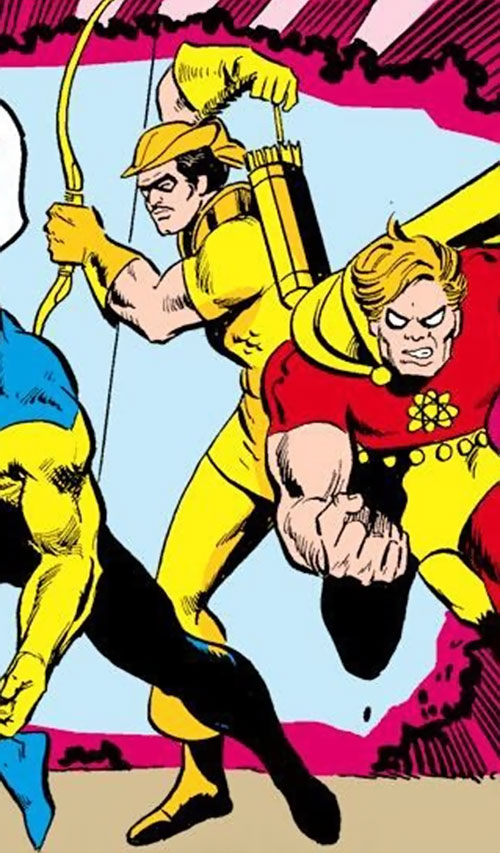 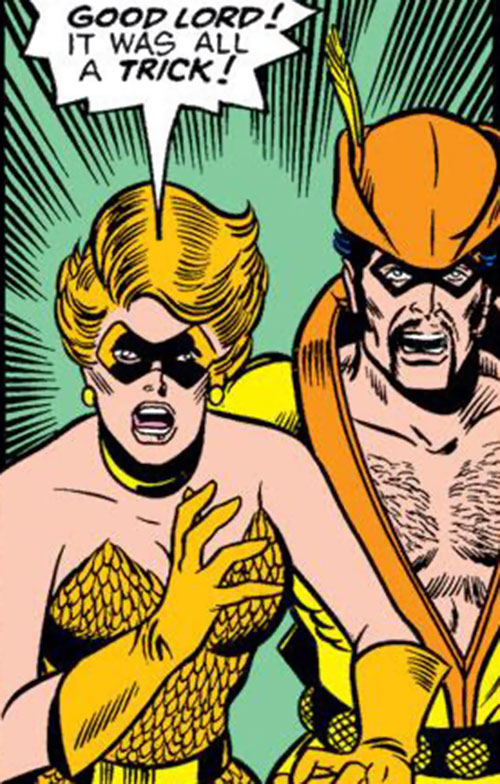