Black Betty is a character who appeared in WildStorm comics (back then at Image) in 2007 and 2008. The Wildstorm universe has since been bought and smothered by DC, though Black Betty could exist in the DC Universe.

She is likely named after a traditional African-American work song. One of the first known recordings is by Lead Belly  in 1939. But it reached the mainstream in a rock version by Ram Jam  in 1977.

The “Black Betty” in the song is thought to be a variant on the Black Maria – that is, a corrections wagon.

This writeups contains S P O I L E R S about the StormWatch PHD limited series, which I though was pretty good.

Black Betty knows how to recognise, counteract and very occasionally make use of magic. However, she decided against becoming a full sorceress. In DC Heroes RPG terms she stopped short of the Build Artefacts or Rituals Subskills of the Occultism Skill.

Still, she is very knowledgeable about the occult. Betty is particularly good at identifying weak points in mystical opponents, structures and spells. She likely was the best such specialist StormWatch could hope to recruit.

As Dusk’s aide, she has been enhanced by a series of enchantments and other defences. While she refuses to explain anything about those, the three countermeasures that have been identified so far are:

Elizabeth “Black Betty” Rowan has been apprenticed to Jeremiah Dusk (once referred to as Jeremiah Cain) since she was 16. She decided to remain his aide rather than become a sorceress herself.

Though she has manifest mystic potential, she decided she wanted to still have a chance at a normal life. The creepy, strange and gross disciplines needed to wield powerful magic would have made that impossible.

Even without being a witch, being the sidekick of the most powerful sorcerer in the North-Eastern US was a procession of strangeness and horrors. During those 10 to 15 years, Black Betty went through many sanity-blasting experiences. These included excursions into demonic dimensions and mystic combat against Things Man Was Not Meant To Know. 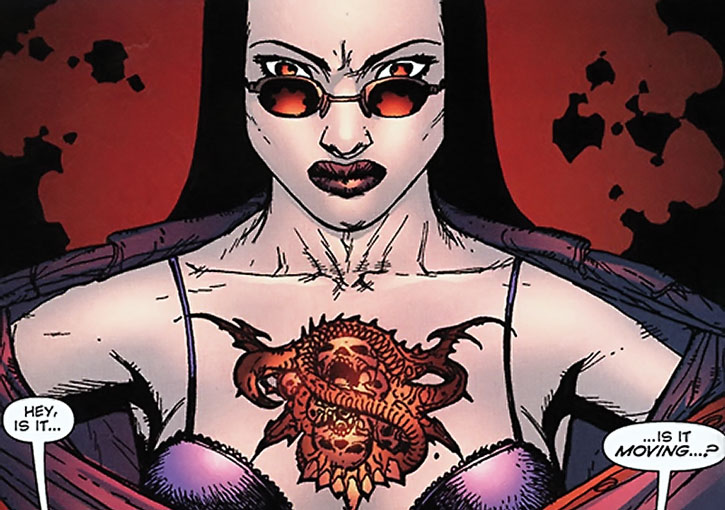 While she seems unaffected by those, she is bound by some sort of code not to talk about her experiences.

Early on Elizabeth and Jeremiah were lovers, but it did not work out. She was 16 and he was more than 200, and their relationship was too far along a mentor/mentee track already. They gave up the sex and romance and concentrated on the master and apprentice relationship with which they were both more comfortable. Howbeit, most people still assume that they are lovers.

Dusk seems known even to the general public, and a figure in the heroic community. His assistant is also known for her occult expertise – Rowan became a full professor of metaphysics at Hudson University.

In late 2005 or early 2006, Jeremiah Dusk astrally projected for unrevealed heroic purposes. He did not come back to his body. The faithful Betty took care of the comatose conjuror, and hid the truth. The knowledge that Jeremiah was comatose would have triggered a number of mystical attacks and invasions.

She then waited with slowly mounting fear and sadness for the return of the thaumaturgist’s astral soul to his body.

In the meanwhile, Professor Rowan helped against mystic threats. For instance she warped in during the New York City Massacre to help StormWatch defeat one of their foes, the Ferryman, a recurrent enemy of Jeremiah Dusk. 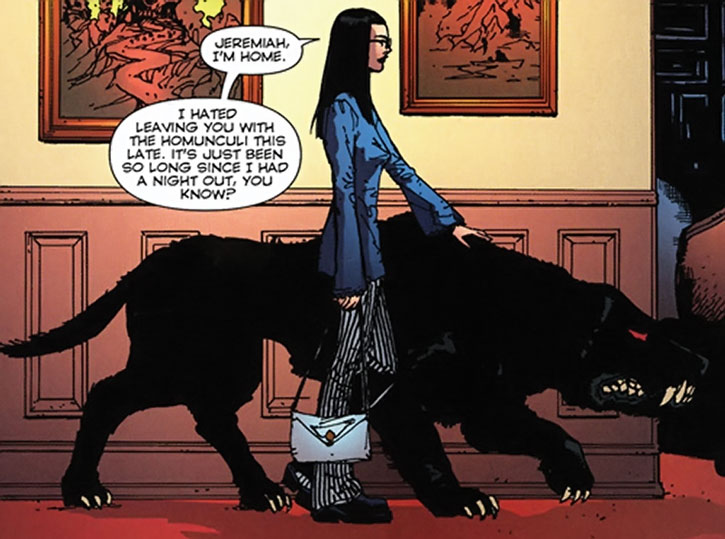 In 2007, Black Betty was contacted by Jackson King to join StormWatch PHD. She took the offer, in part since she was afraid that Dusk might never come back. If so, humanity would be forever bereft of his protection against otherdimensional  and mystical threats.

During the Armageddon events that left the Earth in ruins, Betty got her family in Jeremiah Dusk’s manor. She then used programmed spells to shift the building to another dimension. She hasn’t been seen since.

Black Betty almost always wears a large, beautiful smile and is generally super-perky. She dresses in a variety of goth-like outfits.

Despite her monicker and goth clothing, Black Betty is forever perky, cheerful and smiling. She takes everything in stride, and his almost immune to fear and stress. She’s the team little miss sunshine, which tends to annoy Gorgeous, and is always nice and supportive. 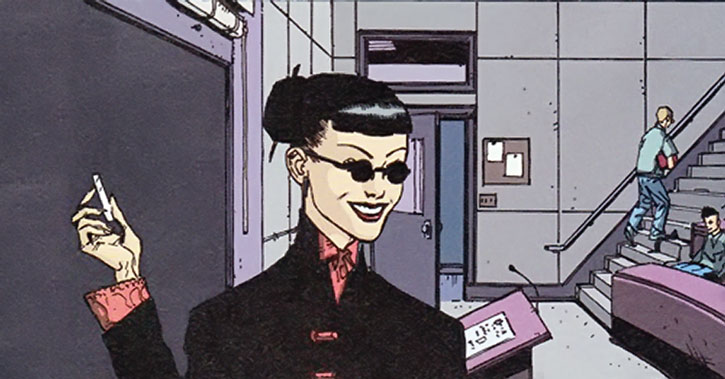 Still, she occasionally hints at how tough she actually is, and how she has seen things that would demolish lesser minds.

Black Betty’s main weakness is her hidden anxiety about the comatose Jeremiah. Though she knows those things happen and it might be many years before Dusk makes it back to his body, she’s worried sick and this is grinding her down.

Professor Rowan does things like baking muffins for the team, because everybody likes muffins and muffins make people happy.

“You overreach yourself. No man is my master. And you’re far less than a man.”

“Exactly. The Ferryman takes the form of Charon , a figure from Greek mythology. The [Greek Orthodox] Church supplanted that mythology, so the objects of their faith are especially damaging to him.”

(After reversing the possession by Lady Decadence) “I’ve been possessed by demons, angels, ghosts and elder gods. I’m trained to resist them all. I have to admit, aliens are a new experience, but the shock of the Taser let me grab control away from your lady friend. So now, *she* dances to my tune, and my tune carries a parental advisory.” (SHUNK !)

(After a harrowing encounter with vastly superior forces, with a huge smile) “ Can you believe it ? We freaking won !” 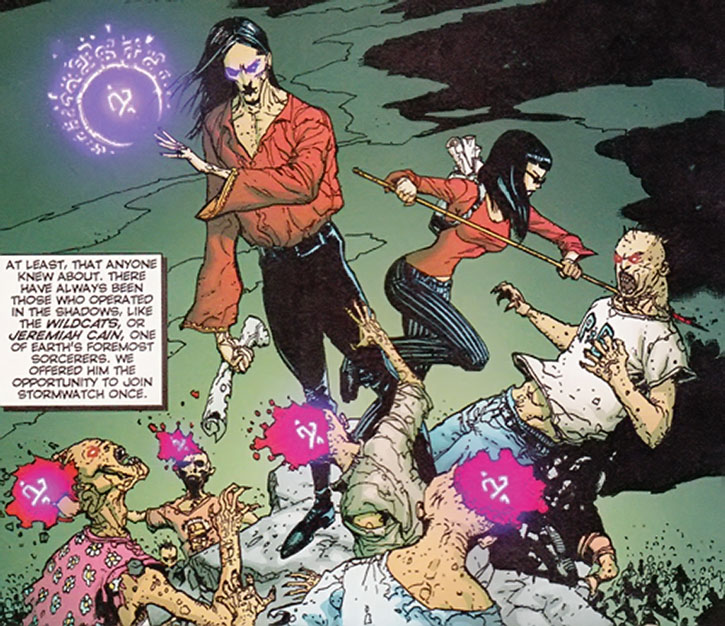 (With a bolt of rebar through her leg) “Hurts like hell, but I’m not in immediate danger. So do what you gotta do.”

“I heal fast. One of my secret magical defenses – perk of being a sorcerer’s apprentice.”

“Whether they admit it or not, handsome, every guy likes goth chicks.”

Bonuses and Limitations:
Scientist (Observation) is Contingent upon her Occultist Skill, and can only be used on magical beings and phenomena.

Equipment:
Sunglasses [BODY 01, Shade: 01] and access to a 15 APs Occultist Lab. She can’t really use the Lab, but it gives her access to a large number of reagents and speciality occultist goods, such as genuine holy water.

The Magus’s mansion includes a lot of resources ; those that have been mentioned or seen include: 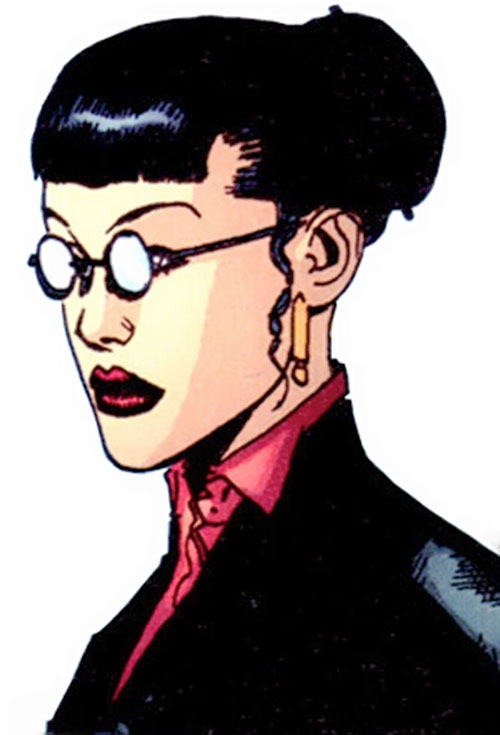 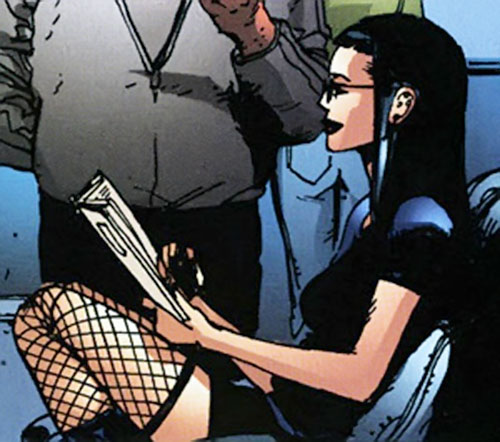 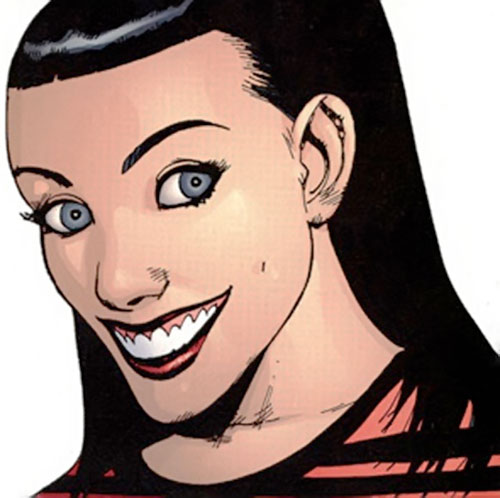 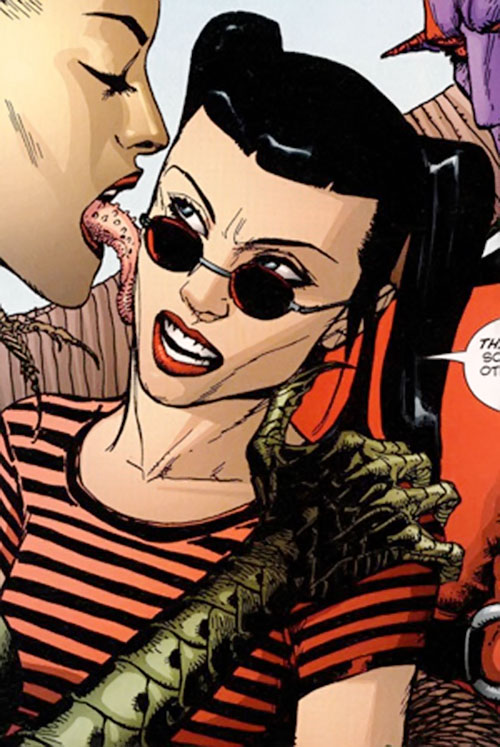