He can also generate particle/electron interaction fields to create solid forms. This is also quite draining, and he generally just creates tough force fields.

The most powerful use of his abilities is when Black Bolt emits a sound with his mouth. This “quasi-sonic scream” can, if but a whisper, rock a battleship or flatten most opponents. When Black Bolt screams, he can shatter mountains with the force of a nuclear explosion.

This ability is so devastating that Black Bolt rarely uses it, as he fears causing tremendous collateral damage.

Black Bolt has on occasion demonstrated superhuman reflexes and grace – such as easily dodging a series of blows by the Thing, or catching a tank shell bare-handed. This is rare, though.

Black Bolt is a member of the genetic offshoot of humanity called the Inhumans, who lived in the island city of Attilan. He was born to two of Attilan’s top geneticists, Agon, head of the ruling Council of Genetics, and Rynda, director of the Prenatal Care Center. 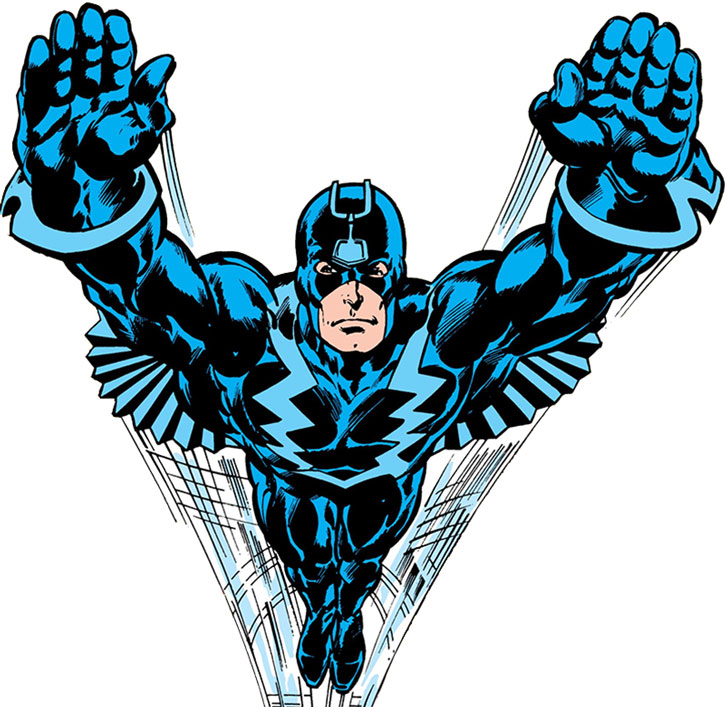 Subjected to the mutagenic Terrigen Mist while still an embryo, Black Bolt was born with strange powers. Those surpassed even the Inhuman’s norm. As an infant, he demonstrated destructive energy-manipulative abilities which he could not yet control.

To protect the community, he was placed inside a sound-proofed chamber and given an energy-harnessing suit. There, he was schooled in the art of controlling his powers until the age of 19, when he was permitted to enter society.

Stepping out of his chamber

A month after being awarded his freedom, Black Bolt discovered his younger brother, Maximus, in the process of making a treacherous pact with emissaries of the alien race called the Kree. Attempting to stop the Kree ship before it escaped, Black Bolt used the forbidden power of his quasi-sonic voice to knock the ship out of the sky.

When the ship crashed to Earth, it landed on the Parliament building. This killed several key members of the Council, including his parents, and left his brother insane. Despite his guilt and silent protests, Black Bolt was obligated to accept the mantle of leadership of the Inhumans at the age of 20. 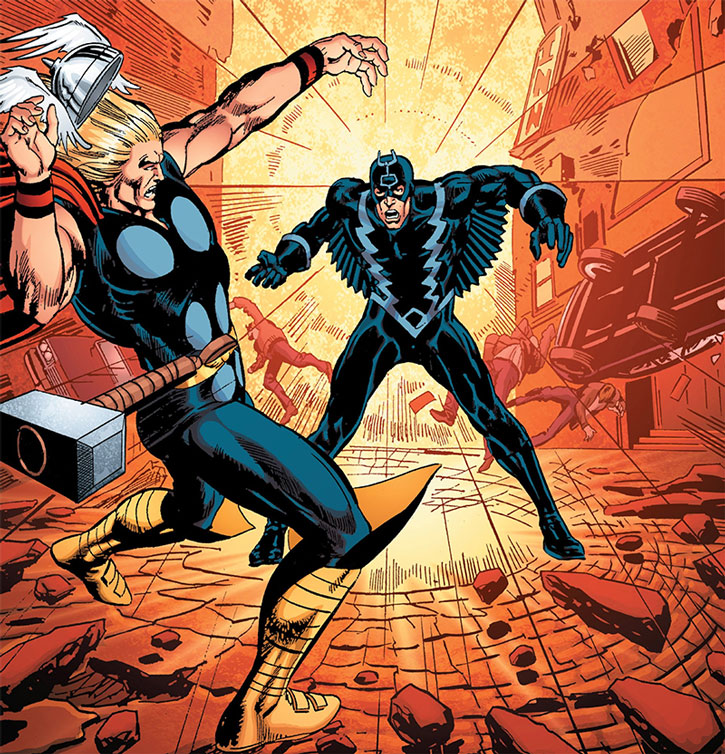 Black Bolt’s first crisis in leadership came when his cousin Triton was briefly held captive by humans. Learning of Triton’s encounter upon his escape, Black Bolt decided that the Inhumans’ island home should be moved to a remote location in the Himalayas.

After this great migration, Black Bolt faced his second great crisis when his mad brother Maximus unleashed the Trikon, three of the Inhumans’ worker drones who were transformed into energy beings. The Trikon enabled Maximus to wrest the rule from his brother and sent Black Bolt and other members of the Royal family into exile.

For the next few years, Black Bolt and his kinsmen wandered Asia, Europe, and finally the Americas. They searched his betrothed mate, Medusa, who had been separated from the others during the battle with the Trikon. Eventually Black Bolt was reunited with Medusa and the Royal Family resumed the crown.

Black Bolt has led the Inhumans through some of the most turbulent times in their history, including:

Once there, Black Bolt had completed the traditionally lengthy period of betrothal, and Black Bolt and Medusa were wed. More recently, Medusa gave birth to Black Bolt’s son, Ahura, although the current status of the boy remains unrevealed.

The sorceress Morgan le Fay later raised the continent of Atlantis from the ocean floor. The Inhumans Genetic Council, who regarded Atlantis as the Inhumans’ hereditary homeland, embroiled Black Bolt and the Inhumans in a conflict with the sorceress as well as the Fantastic Four and the Sub-Mariner.

Ultimately, the Inhumans remained in control of Atlantis, although they were soon attacked by paranoid government forces. Black Bolt, averse to retaliating, sent an envoy to the United Nations. He asked that the human army by removed from their borders before the Inhumans might be forced to destroy them.

The United Nations denied the request, due to the Inhumans preference for seclusion and the U.N.’s general unwillingness to impose its will on the attackers. In the face of continued aggression, Black Bolt chose not to strike back.

He believed that if he did so, it would only bring more humans into contact with his people, contact that would eventually contaminate or destroy the entire Inhuman society. Instead, Black Bolt ordered the Inhumans to retreat, handing the city over to the humans.

Return of the Kree

Soon after, agents of the alien Kree, the original creators of the Inhumans, returned. They were led by the judge and warrior, Ronan the Accuser. Ronan, typical of the Kree, regarded the Inhumans as their tools to master, a race bred to provide the Kree with ready-made foot soldiers to pacify planets the Kree may intend to conquer.

The Kree uprooted Attilan entirely, pulling it into space and subduing Black Bolt and the Royal Family. In particular, Black Bolt, Medusa, and Gorgon were ordered to disrupt a marriage between the Kree’s rival alien civilizations, the Shi’ar and the Spartoi, and to assassinate the Shi’ar empress Lilandra.

Black Bolt refused to comply, at the cost of torture, and thereby condemning the entire Inhuman population as hostage. In the end, it was Ronan himself who committed the crime, although the empress was saved by being impersonated by a shape-changing member of the Imperial Guard.

Black Bolt single-handedly dueled and defeated Ronan. But the Inhumans turned away from him, deposing him by decree and exiling him. The Royal Family returned to Earth, monarchs with no people.

Black Bolt and the Royal Family hoped to turn to the United Nations, to find some small place to be welcomed in. Xenophobia led every nation to reject the Family. In fact, the only nation offering the Inhumans sanctuary was Latveria, ruled by the villain Doctor Doom, and the Inhumans reluctantly accepted.

It’s a bit hard to say as he never utters a word. But Black Bolt is obviously regal, very serious and extremely controlled. He never acts rashly and prefers to consider situations and ponder for a long time before acting. Medusa normally acts as his interpreter, as she has the best command of the sign language Black Bolt uses.

Black Bolt is not a man of action. Even in dire crises he will be reluctant to fight. In many ways, he considers himself the “nuclear deterrent” of the Inhumans – to be unleashed only in desperate cases. Once Black Bolt flies into combat, it’s a sure sign things have escalated to a thoroughly unhealthy level.

He’s also extremely reticent to have the Inhumans interact or attack humans, even in self-defence, and will only accept such clashes when no other option is left.

Black Bolt, the Silent King, is sometimes depicted as a very mysterious figure. He keeps his cards extremely close to his chest, never revealing what he really knows and the true depth of his intricate strategies – except, sometimes, to his wife.

Silently unfurling his secret, clever plans and bearing the lifelong burden of responsibility for his people, Black Bolt is often more of a plot device than a legible character.

The entire Inhuman culture tries to avoid contact with humanity, so they are actually quite easy to insert in any continuity. They’re the sort of people the Challengers of the Unknown would encounter in the 1960s.

Drawbacks:
Authority Figure (when he is King of the Inhumans), Attack Vulnerability (-2 CS vs. disease). 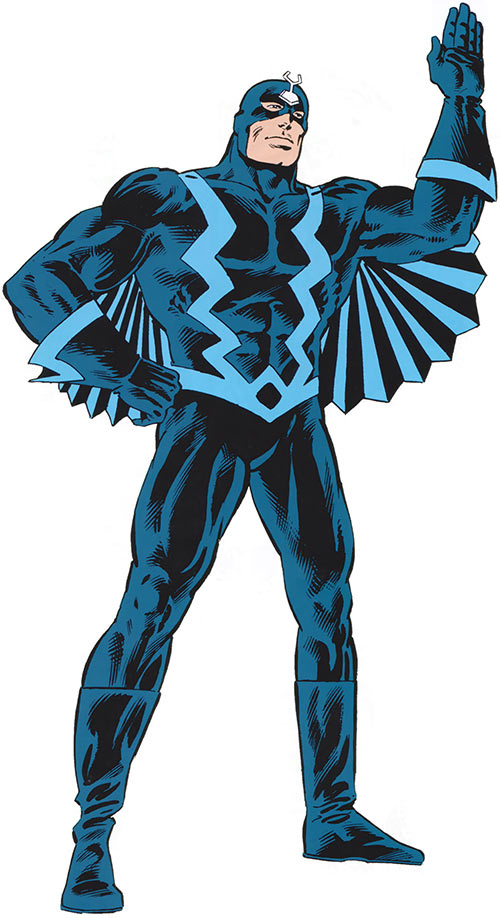 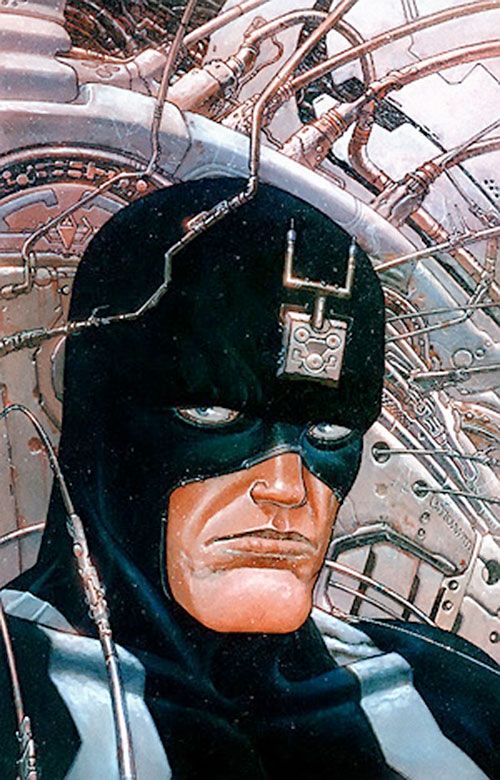 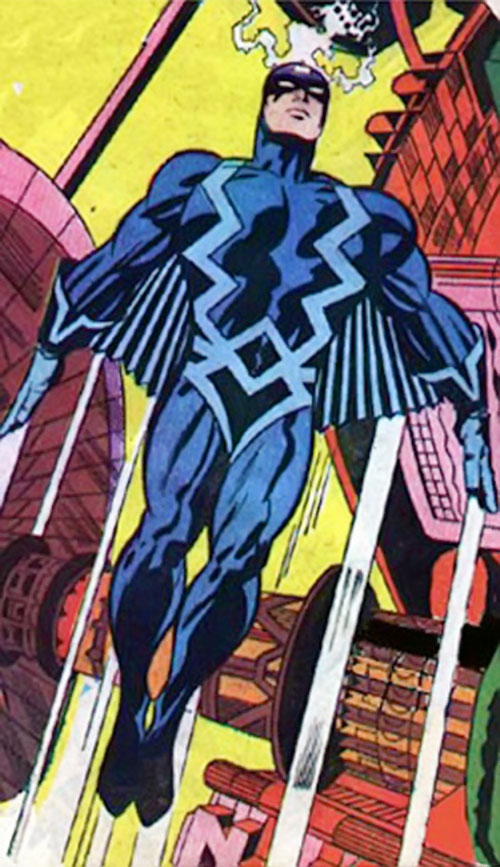 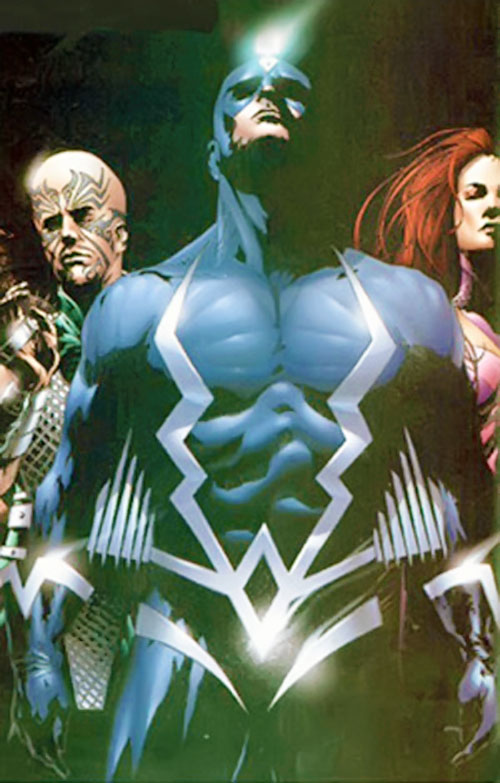