This character is from an obscure B&W early 1990s indie comic book. There was only one issue, AFAIK.

It seems to have been almost entirely forgotten. But writeups.org always cares.

Black-Bow is tough as nails – a physical specimen made for action. He is competent at following leads, tracking down targets and using his weapon.

His bow appears in his hand – it is assembled from the atoms around him. The arrows appear to deliver killing shots but later dematerialize. The victim survives, but without memory of the attack, sick and feeling the pain of the kill.

Black-Bow has Olympic level acrobatic skills and a forceful demeanor. He will likely intimidate weaker opponents and mooks before finishing them with a kill shot.

Jack grew up somewhere in Illinois. It was a Monday, May 18th and he was on his way to his first professional job interview. He was excited and thought how proud Wendy would be. Maybe she would even start talking to him again. Suddenly a hand grabbed him from a storm drain and drug him below. 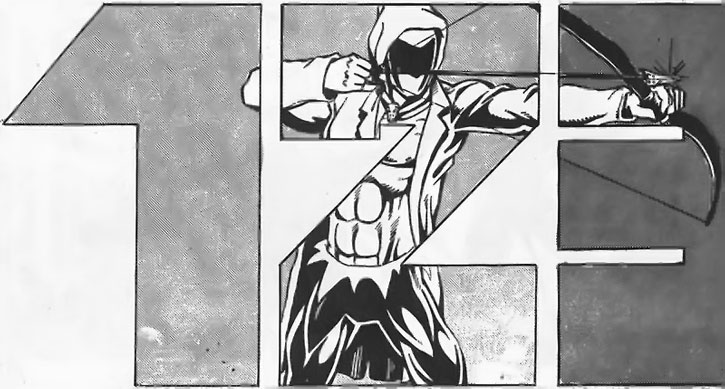 When Jack came to he found himself chained. A prisoner to a demonic-looking alien. The creature was holding a black bow in his hands as if offering it to his captive. The sewer rats swarmed on him, biting him. Jack somehow knew that if he accepted the bow he would be safe. So he did. He opened his mind to it.

As soon as he touched the bow he felt his mind fill with images and his body filled with power. At that moment he became Black-Bow! Jack looked for the alien but it had vanished.

From that day forward he knew what he had to do. He would became a force for justice. 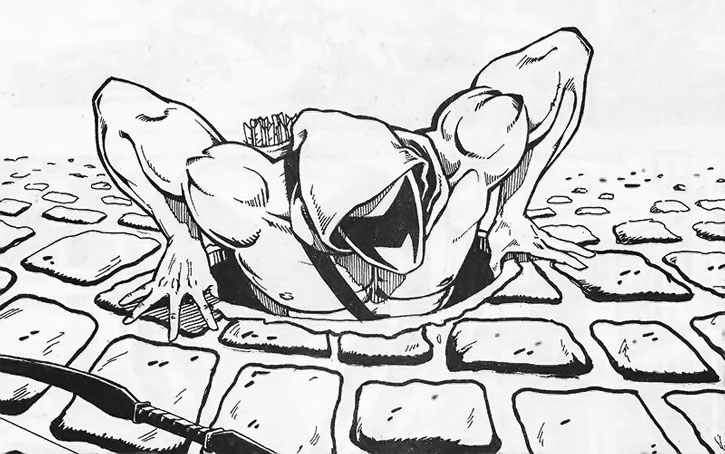 Black-Bow made it to the roof and gained entrance through a skylight. When a metal panel slid in place of the skylight and Black-Bow saw he was standing in a pentagram he knew he’d been set up. He had to flee from a creature called Slaze, that threatened to drag him back to Hell.

Later, after making his way back to the rooftop Black-Bow took down more guards before escaping the mansion. Black-Bow retreated to the sewers where he states he will need help to take this guy down.

Black-Bow wears a full black and white face mask with a red hood held in place by a skull-shaped clasp. He goes bare-chested with black pants and archery glove on his right hand.

He wears brown moccasins with red wrappings. Occasionally, Black-Bow will also wear a light jacket open in the front. Black-Bow wears a tube-quiver of arrows on his back. 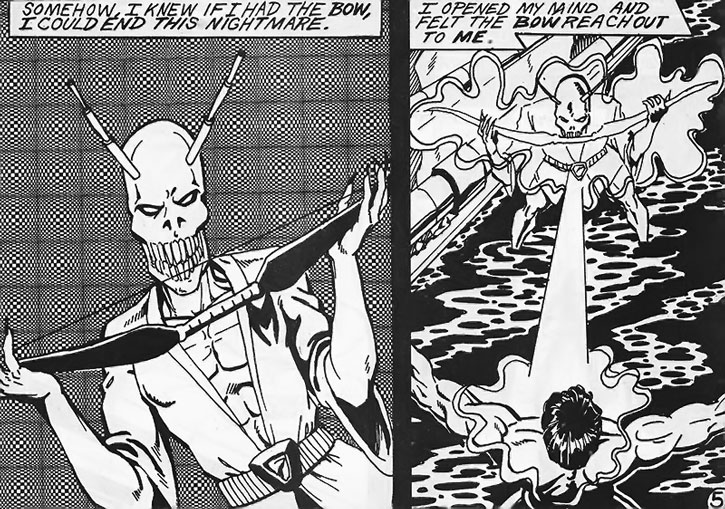 Black-Bow is a tough talking action guy from the 90’s. One-liners and a determination to seek vengeance are his calling card.

At the end of the first issue Black-Bow is looking for help to take down Atkins, so he could come looking for heroes to help him. A GM could flesh out Atkins’ mansion, Atkins himself, his mooks, and satanic guards and traps.

Black-Bow: “Now tell me the name of your supplier before I lose my temper.”
Man: “Atkins ! John Atkins !! He lives over on Richardson Avenue !”
Black-Bow: “Don’t lie boy !”
Man: “I’m not !! I’m not ! Please let me go ?”
Black-Bow: “Run along boy, you have to the count of five.”
(Man runs…1…2…3… oops. Black-Bow releases his arrow at three piercing the man’s heart seemingly killing him)
Black-Bow: “You disgust me.”

“Justice must be served tonight.”

Bonuses and Limitations:
Acrobatics, Thief, and Weaponry are Powered Skills gained when he accepted the bow.

Connections:
None at this point.

It appears only one issue was ever published for this character, therefore some stats are speculative. I originally gave Black-Bow the Lightning Release Schtick but since his Bow doesn’t have the Ammo: 01 limitation he doesn’t need it.

It’s unclear whether Black-Bow has Insta-change or if his transformation was a permanent one. 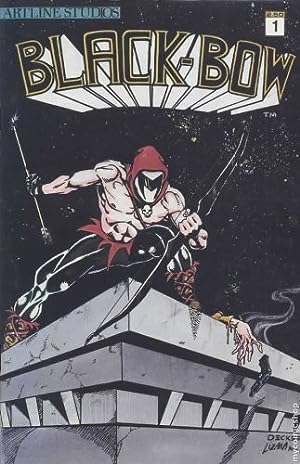 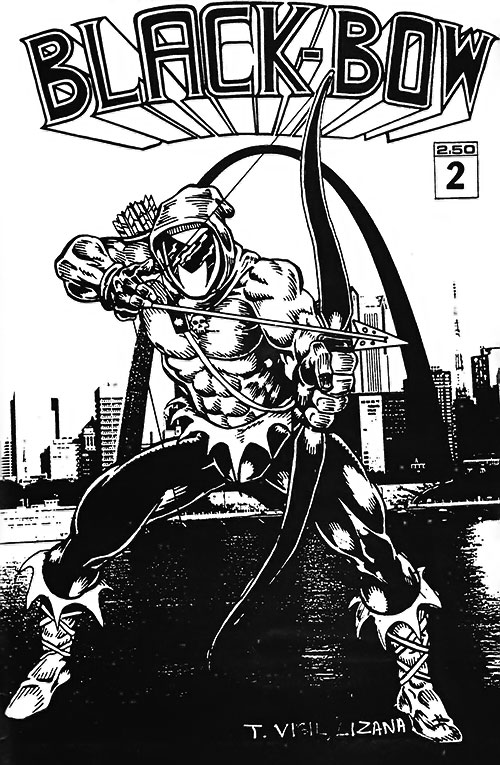 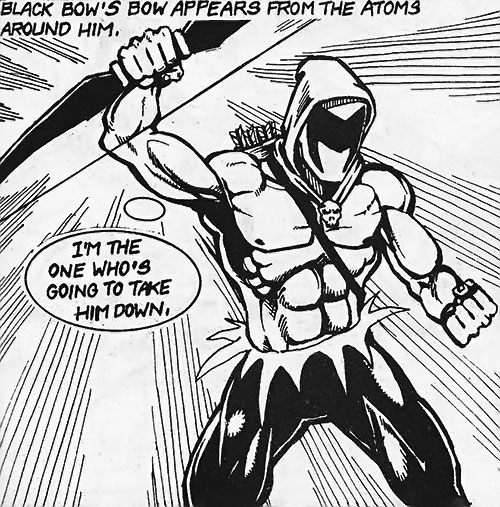 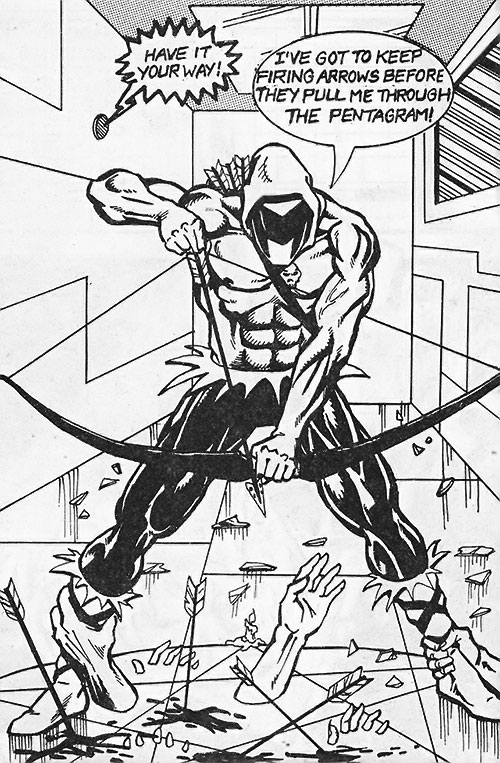 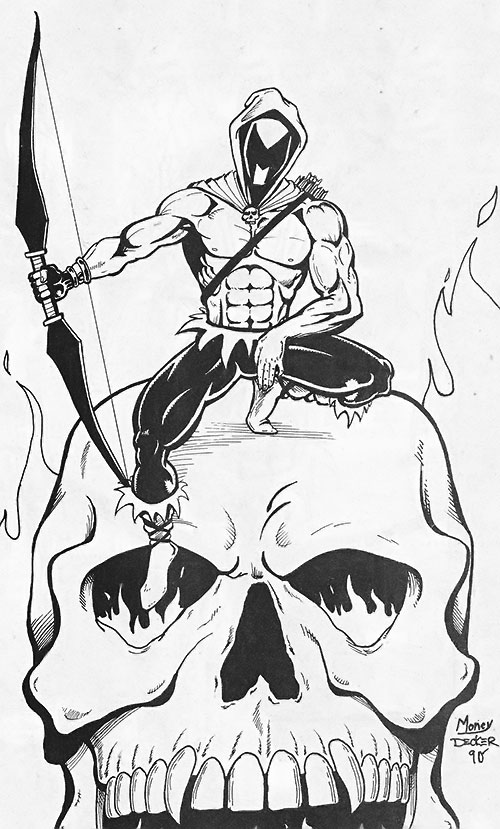 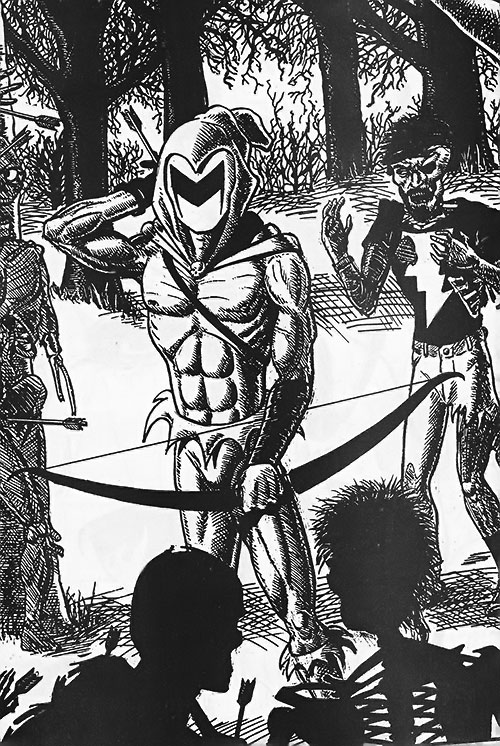