Meet the most fascinating crook of all time ! The Black Canary ! Though an enraged underworld would have given a fortune for her identity, nobody knew who she was…

This profile is very specifically about the Black Canary as she appears in Flash Comics Vol. 1 #86-91, in the Johnny Thunder strips.

Once she gets her own strip in #92, the character is retconnedMaking changes to a character or story after the fact into something different.

At this stage she is a sort-of, kind-of villain. Mostly she’s a cool costume design – striking, sexy and tough. This sparked interest, allowing the Canary to be redeveloped as an actual character.

The Johnny Thunder stories were goofy comedies about an inept hero succeeding through ginormous amounts of luck (and occasionally the help of the Thunderbolt, a sort of genie). They didn’t make much sense or go anywhere.

The Black Canary is a skilled thief. She seems to specialize as a safecracker.

She’s smart and worldly, and often behaves much like a 1940s comic book detective.

The Canary is also strikingly attractive.

She doesn’t seem to be a fighter, though she packs a concealed pocket pistol. Presumably in .25 ACP, as was the style of the day. She was once seen with a larger pistol, presumably a Colt M1911A1.

Black Canary also seems remarkably accurate when picking up random nearby objects and throwing them at people.

She excels at knowing when heists are planned in the city, through unrevealed means. Her amount of inside knowledge about mobs may mean some sort of infiltration skill. Since a newspaper states that “no two people agree on a description of her”, I’d assume disguises.

The Black Canary could train an actual black canary to fly back to her no matter where she was. This was treated as being no big deal. 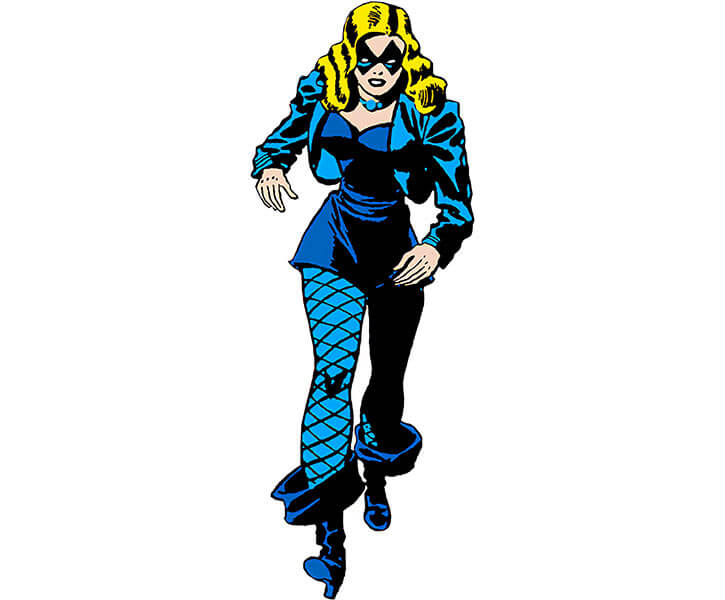 However, she is known and hated through the underworld for only stealing from criminals.

When Thunder noted that the newspapers were full of stories about her daring crimes, she said that she had been framed. But then of course she would say that.

One day, she easily manipulated the goofy Johnny Thunder into stealing a party mask from a criminal’s safe. She used the mask to infiltrate an underworld party and steal a famed sapphire.

However, she was caught in the act by mobsters. The arrival of Johnny Thunder and the Thunderbolt allowed her to escape, albeit without the gemstone.

The Black Canary then stole the diary of a murderous mobster. But she had to throw it into Johnny Thunder’s arms as she was being chased.

Gangsters easily pried the diary away from Thunder, but he followed them and was shadowed by Black Canary in turn. They recovered the diary, and Black Canary said she would hand it over to the police.

After stealing a map leading to hidden loot, the Black Canary again was about to be caught by gangsters. At the last minute she entered a bakery. There she hid the map and a trained black canary into a pie that she had shipped to Johnny Thunder.

When the black canary flew out of the pie, it took Johnny to the hideout where the gangsters were holding Black Canary. He was promptly captured, but the Thunderbolt saved him and the Canary. Black Canary then recovered the map. 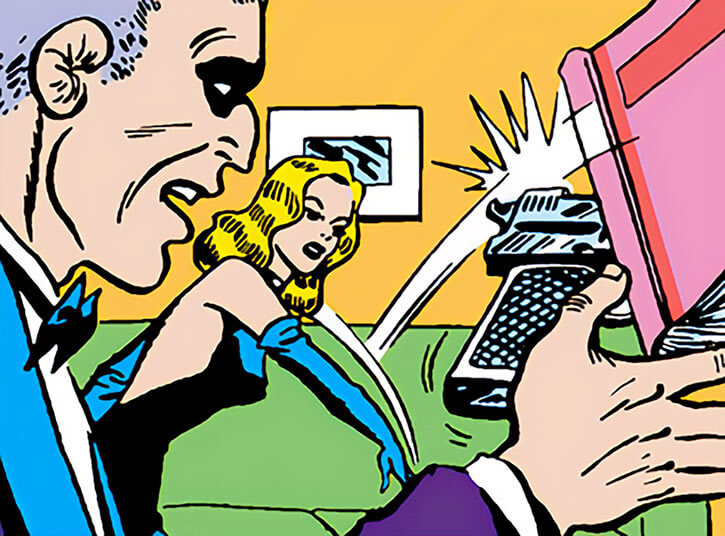 Prelude to the Canary’s song

The feature also becomes “Johnny Thunder and the Black Canary”. As you may suspect, this is a sign that the seductive sable songbird is about to overtake Johnny Thunder in popularity.

Cunning gangsters frame Johnny and the Canary for a bank robbery, using trick photography. The pair escapes, only to end up trapped within a gasoline tank. The Thunderbolt get them out, and they help arrest the crook and expose the photo-manipulation.

Learning about an upcoming airborne robbery, the Black Canary warns the owner of the targeted estate. Adding electrified wires over the estate forces the gangsters to abort the plan. However, Black Canary is captured when the gangsters randomly run into Johnny Thunder.

The gangsters force her to have the electric wires removed, to parachute onto the estate, and to rob the place for them. They then try to kill both her and Johnny, since the “loot” she brought back were just bricks. The Thunderbolt, of course, saves everyone. Twice.

By the next issue of Flash Comics, Johnny Thunder is nowhere to be seen. His feature has been replaced by a solo Black Canary feature. The Black Canary character was also reworked and developed, and is no longer a criminal.

Does that mean that her Johnny Thunder appearances were retconned out ?

Honestly, these stories are probably too minor to bother.

All that counts is that the two met early during the Golden Age’s Black Canary career, and worked together at least once. The last case with the airborne robbery is probably the easiest one to retain if you want to reference such an early case.

The 1985 Who’s Who in the DC Universe addresses this with two retcons.

The Black Canary seems quite young. She’s probably in her late teens, as she could credibly pretend that she had a guardian.

She writes her messages in black ink. Her epistolaryHaving to do with letters and mail signature is a canary silhouette perched on a thin branch, also in black ink. 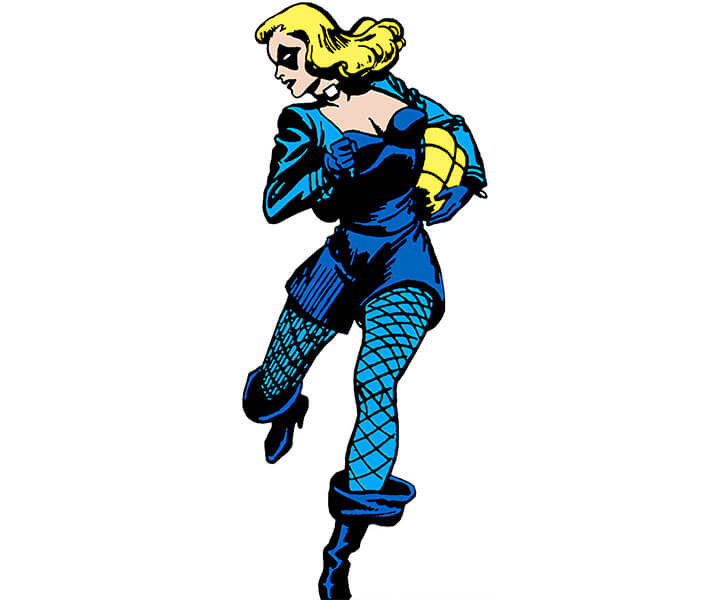 Black Canary is a pragmatic robber. However, she has ethics – she’s a tough gal, but she won’t commit crimes she finds morally repugnant. She’ll even work to “undo” crimes committed by other gangsters that she finds repulsive, such as stealing from a charity.

She is also loyal toward her allies, even if they’re just catspaws of convenience. In particular she seemed to like that childish goofball, Johnny Thunder, and seemed aware of his track record.

“‘Socks’ Slade has had the Kooblin Sapphire long enough…”

“These nice boys stole some charity funds and cached the loot ! I’m pretty hard-boiled, but I don’t go for that !”

Mistrust (wanted by both the police and the mob), Secret Identity. 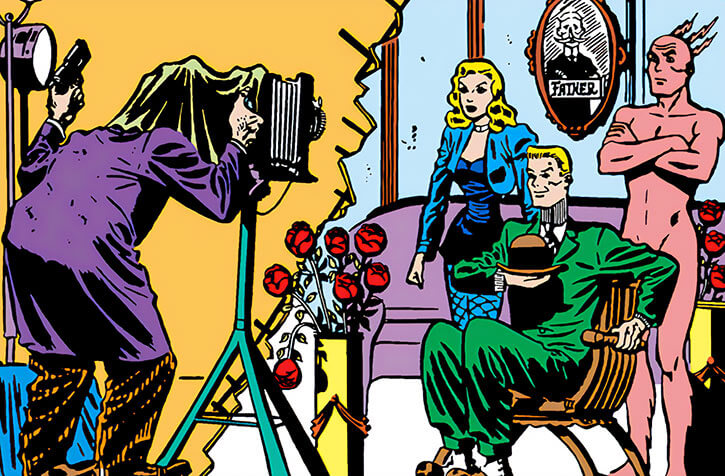 Knocked out from behind !

Sneaking behind people to knock them out is just that easy. However, it must be Bashing Combat for the penalties to apply. Which is not much of a penalty though, since Bashing Combat is the default.

The Canary doesn’t really demonstrate Attractive. For instance she never charm any gangster threatening her (which is say, useful as a diversion… oops I said it). She leaves Johnny, errr, thunderstruck – but that’s trivial for any pretty girl to achieve.

Still, she could have had it in more developed stories. Since attractiveness was her main hook at this stage.

Likewise some Area Knowledge (New York City), some Acrobatics (Climbing), some Charisma (Interrogation), some Vehicles (Land) and other thief/criminal/adventurer/rogue skills are distinct possibilities. Even detective skills could credibly exist, such as Detective (Clue Analysis).

But as always, we stuck to what is actually demonstrated (or at least *heavily* implied).