This article is part of a series. Just hit our Guide to Black Canary character profiles for all the information.

Dinah accompanied the pair (and Appa Ali Apsa) to the planet Maltus. Black Canary was instrumental in stopping Mother Juna, to save Maltus from overpopulation.

She also saved Hal from the priestess Medusa and her sisterhood.

During this era Dinah acquired personal quarters. It was a cottage “on an empty street in a small Midwestern town”.

In 1971, she became a PE teacher at the Meadowhill School. But it all promptly turned into a horror flick. The obsessively misogynistic and orderly cook was in total control through a traumatised psychic little girl, Sybil.

They nearly murdered Dinah. But Oliver and Hal came in just in time.

Green Arrow then discovered that his former sidekick Speedy (Roy Harper) was doing heroin. Though Dinah was fed up with Oliver at that point, Hal asked her to help Roy. She became the young man’s friend while helping him beat his addiction.

Dinah then mentioned she had taken another job. Perhaps in physical education. 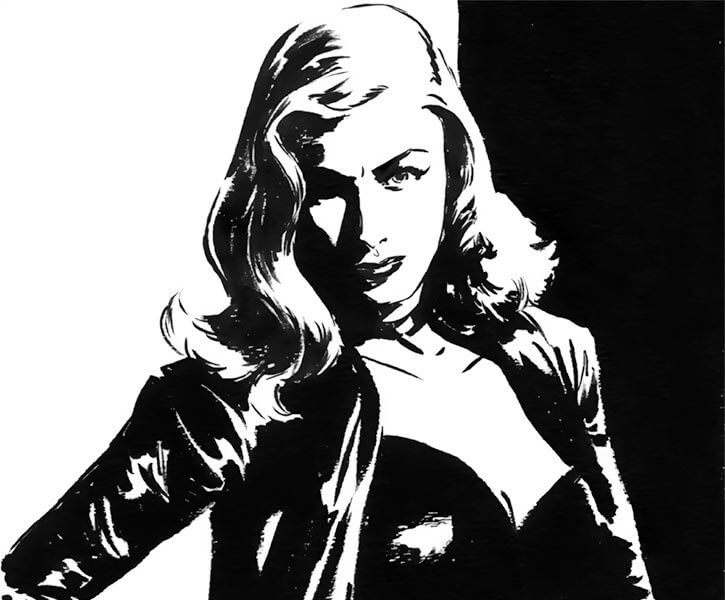 This one isn’t published art. It is from one of Michael Lark  ’s sketchbooks.

Green Arrow, Green Lantern and Black Canary once reunited to assist Batman (Bruce Wayne). He needed their help as he was being prepped for surgery. The four narrowly stopped a huge heroin shipment in Gotham.

Black Canary briefly worked as a self-defence instructor for a radical feminist movement. But it was actually a cover for a crew of female mobsters. These were training for a raid to free Catwoman (Selina Kyle) during a penitentiary transfer. Dinah defeated them just in time.

Two months later, a drugged motorist rammed the phone booth Ms. Drake-Lance was using. She was critically wounded, and there was a shortage for her rare blood type.

Hal located the ashram where Oliver Queen had retreated. They returned in time for Oliver’s blood to save Dinah’s life.

Oh my stars and flowers

After Black Canary recovered, she and Green Arrow were dating again. She moved to Star City, and returned to floristry by opening the “Pretty Bird Flower Shoppe”.

During this era she again teamed up with Batman. Disguised as a stewardess and a flight engineer, they snuck aboard a jumbo jet held by skyjackers. Though it was a close call, this operation was successful.

By this point, Queen had accumulated enough Jerk Points to make Drake-Lance confess that she was in love with him. Her taste in men was always terrible. 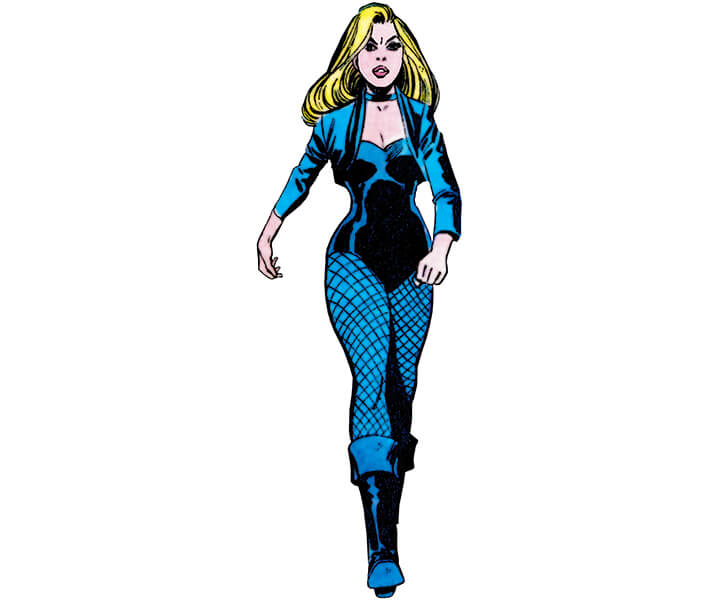 We’ve now reached 1973, so let’s have some signature music from that year. Lynyrd Skynyrd’s Free bird would be a natural choice.

Normally I’d get a mid-1970s live version, to show how people dressed during this era of Black Canary’s adventures. But there’s the slight problem of the huge Slavers’ Flag they had as a stage backdrop, so not gon’ do that.

Put a bow on it

Green Arrow and Black Canary had a team-up with an amnesiac Krypto, the super-dog. True story. Black Canary was all for adopting the dog, until they realised he was Superman’s.

In a *completely* different genre, GA and BC went after Peter Lazenby (no relation), a senior associate of a huge drugs cartel. Undercover, Dinah seduced Lazenby. Her intel allowed Oliver to keep hitting the cartel’s network.

She was eventually exposed, but GA came in in time to… fall into a trap. However, Dinah used her sonic cry to turn the tables. They then took the cartel down.

(This was the first time Mike Grell wrote GA and BC. He would return 12 years later with a similar story, the classic The Longbow Hunters, then became GA’s main writer. Like Haney, Grell here features a markedly more capable Canary.)

BC and GA then allied with the immortal Davy Tenzer.

They also clashed with the Joker. The pair only eked out a narrow win, and Black Canary was held hostage for most of it.

Green Arrow and Black Canary clashed with a gang of armed clowns. These had taken a telethon show hostage. Presumably, it was a Tuesday.

Dinah commandeered their helicopter and thrashed the gang. However, the kidnapped telethon host was actually a disguised Lex Luthor. So, still a Tuesday.

He used a hypnotic beam on Dinah. This would force her to kill Green Arrow, or Green Arrow to kill her in self-defence. The goal had all along been to test this weapon, starting with the most vulnerable JLA members.

However, Black Canary hypnotised herself into perceiving Lex Luthor as being Green Arrow. She then mauled the malignant magnate. Luthor fled, breaking the conditioning. 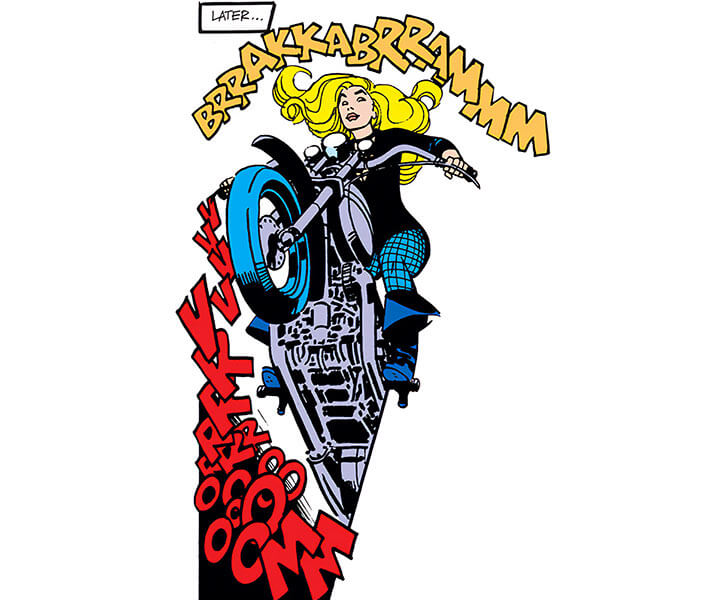 The powerful alien Nekron came to Earth to ravage it. Though the League was victorious in the end, Black Canary’s contribution was comically low.

The League then faced Sonar (Bito Wladon) and Queen Bee (Zazzala). A complicated plot involving nucleo-sonics (to transfer human intelligence to beasts) and super-bees (My God. Bees.) was afoot.

Black Canary saved Chicago by singing up a massive sonic bubble. As her sonics spread, they :

And thus, it seemed that Black Canary no longer was the League’s featherweight ! So to speak. 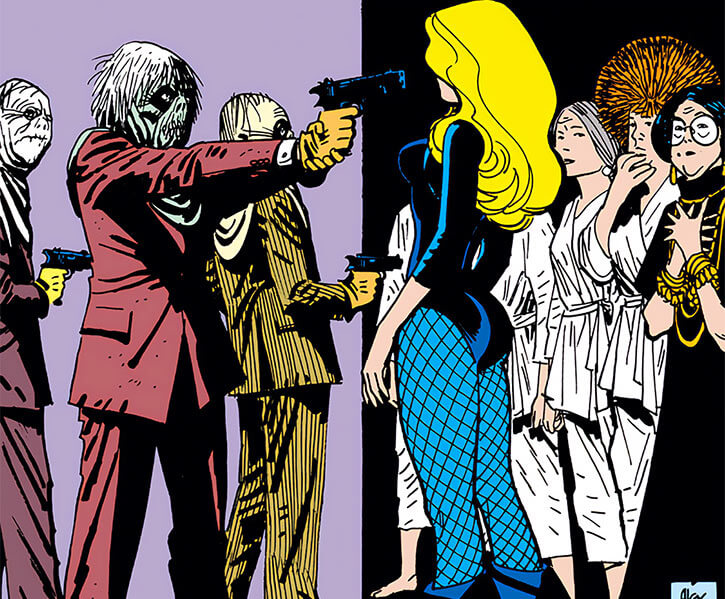 During the early 1970s, BC occasionally wears longer blonde wigs, with shoulder-length or shoulder-blade-length hair.

Her actual hair is also worn longer. Though early on she often keeps the wig and costume on even when off-duty.

Not much during this era. It’s almost never her story, and in a team setting her role is “the girl”.

After her husband’s death, the grieving Black Canary is disoriented, and has lost some confidence. She’s understandably less upbeat.

Part of this is caused by the differences between Earth-2 and Earth-1. She’s practically in a new country, and doesn’t know that much about the menaces there.

Her months-long grief isn’t a straight healing process. Sometimes she gets better, but she also experiences several depressive episodes.

(The depressive moods are in-text. But they can also serve as cover for the more dated elements in how Black Canary is written during the early 1970s. Especially since she was characterised as markedly more dynamic, active and confident during the 1960s.)

Pleasures of the fletch

She’s genuinely attracted toward him. But her grief over Larry — and Oliver’s possessive, angry alpha male behaviour — get in the way for years.

Oliver keeps muffing it up. There are months-long spans where he and Dinah aren’t talking. Usually it’s because Queen got into a brawl with some rando ogling Lance.

There are short spans when they’re together, and they once considered marriage. But most of the time there wasn’t an actual relationship outside of Queen’s head.

Once Oliver returns from the ashram, things seem to be going much better. By 1974, they seem to be steady, but Dinah doesn’t explicitly commit until 1975.

Batman also expresses feelings for her once, when his morale isn’t the greatest. But though they impulsively share an awkward kiss, Dinah decides it’s best for them to remain friends. Bruce reacts like an adult and a good buddy, the end.

Dinah is originally annoyed by Green Arrow’s environmentalist doom and gloom. But as she hears Superman tell tales of Krypton’s fate, she comes to realise these are genuine concerns.

She likes being productive, considerate and helpful. She is therefore attracted toward teaching and healthcare jobs to fill her downtime.

Why she returned to floristry is unclear. But likely had to do with her secret identity and paper trails. 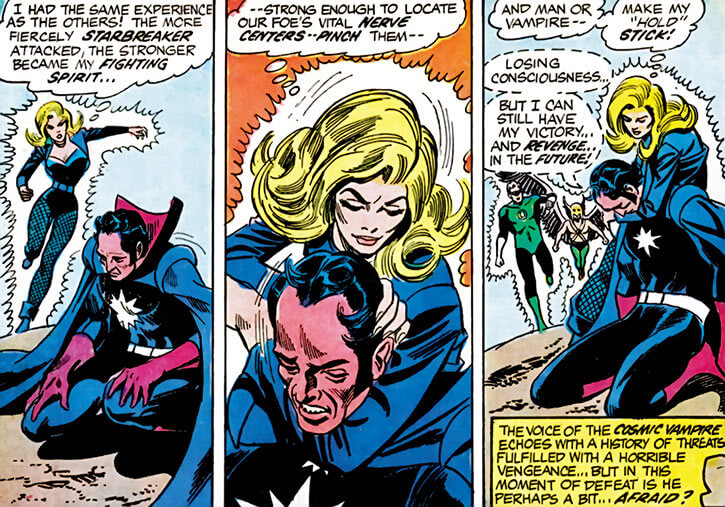 “Gentlemen, I suggest you retreat before I’m forced to behave in a distinctly unladylike manner !”

Green Arrow: “Bee-you-ti-ful, pretty bird ! That’s the second time tonight you saved my hide !”
Black Canary (a bit annoyed): “I’d do it for anyone… a stray cat, a politician… just anyone at all !”

When necessary, Canary uses equipment from the JLA satellite. Such as a light vacuum suit, or a transparent diving suit with a backpack diver propulsion system. 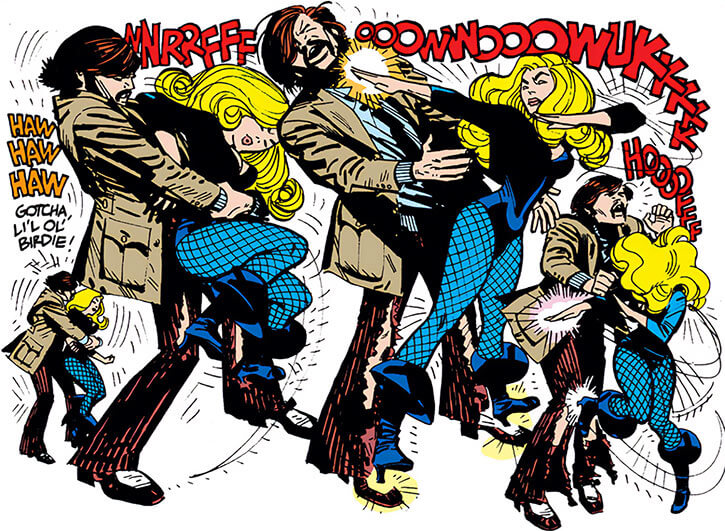 Originally, Canary’s power doesn’t manifest as a cry. It’s a shockwave emitted from the back of her head. Much of her early training is trying to focus it toward the front instead.

At this point it can be modelled as Mental Blast: 06. Even though she can’t see her target, it reliably hits the first person who’s behind her, using her DEX as AV. So if she turns her back to her opponent and activates it it’ll likely work. But that’s… not advisable in combat.

Therefore, she uses it but a handful of times. Hand-to-hand is simply more effective under most circumstances. And, well, it feels like the writers just keep forgetting about it.

It also doubles as Invulnerability (MIN, SPI): 06, though that only works against magic.

And in that Kanigher story she had Mind probe: 05 with a Range of 00 but, guys… like… y’know… Kanigher…

In 1974 she does a Stunt Power. She disrupts a device that seemingly responds to music/sonics. But it’s unclear and circumstantial.

In 1975 she does a Sonic Beam: 08 attack. It’s still ultrasonic and appears to have little Range. It also likely was Seriously Marginal, still making hand-to-hand attack a better proposition. She used it twice in one story, but the second was done with Superman’s Leadership help. This ability is nicknamed her “sonic whammy”.

In 1975 (Wonder Woman Vol. 1 #216) BC emits a cry to slow down her fall as she jumps from a high-rise. Let’s call this Gliding: 00. The only Limitation is that she cannot cover horizontal distance – only fall vertically.

The whistle “whammy” attack in a story set in 1970 seemed to be Sonic Beam: 09, Minor Marginal. But it was a retcon from the distant, fantastic future of 1976. At which point the idea of the “Canary cry” was taking shape.

During this issue she also suddenly has Acrobatics: 08. 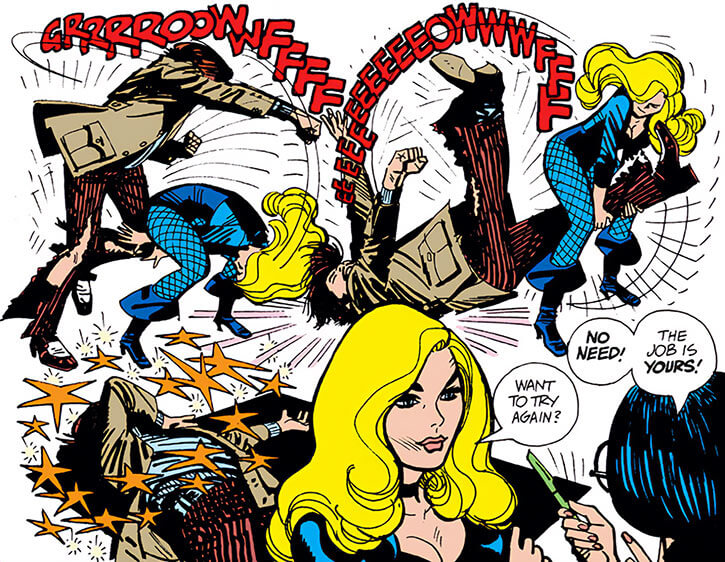 025 Hero Points is for BC at her least effective. This is the case during the vast majority of her Justice League cases during this span, the GL/GA material, etc..

From 1973 onward, a version of Black Canary with 035 HPs (perhaps even 040) pops up increasingly often. This is the case when she works with Batman or Wonder Woman. And in those adventures with GA where she asserts herself.

This version is only seen in The Brave and the Bold Vol. 1 #91 (1970). It’s like a sneak preview of a Canary that won’t otherwise exist for years.

(Another Haney story — B&tB #107 — has her as a competent operative. But the stats in the main block, with 035 HPs, are sufficient for this one.)

Dinah is presumably paid a stipend by the JLA (perhaps the Wayne Foundation) while she’s on Earth-1. Taking jobs was her choice, not a necessity.

Though the captions and storytelling frequently remind us that she’s hot, no Attractive Advantage is in play. She arguably gets better social results with women, who tend to see her as nice and friendly.

I would be surprised if she didn’t learn common words and phrases in Twulshootseed  . But that never was demonstrated.

Source of Character: 1970s DC Comics, with the last issue for this span being JLoA #132.

Writeup completed on the 8th of November, 2019.