This is the second half of this profile, so we have room to cover everything. The first half is there.

Another useful link is our guide to Black Canary character profiles.

One step of Ditto’s plan was Bo Maeve. She had appropriate genetics to receive a sonic scream if implanted with Ditto’s DNA.

When Bo kidnapped Ditto, she was arrested by Amanda Waller’s men and subjected to routine testing. From there, the government would use a remaining dose of Ditto DNA to make Maeve their own Black Canary.

By harmonising with each other, Dinah and Bo would create a powerful vibrational field. When this accidentally occurred during a concert, this seemingly disintegrated Ditto. Along with Kurt Lance as he tried to get the kid out of the field.

This was a key part of Ditto’s plan. The field allowed her to decohere, take Kurt along with her, and rematerialise. But she came back to Earth decades in the *past*.

From there, Kurt Lance arranged for all events to take place according to the plan. As “Mr. Pike” (get it ?), Lance ran the A&B label.

Kurt Lance then hired the Gotham Stadium for a day. He loaded it with advanced sound processing equipment and literal tonnes of amps. This was Ditto’s endgame – to fight Quietus at the stadium.

With the walls of amps, Bo and Dinah’s voices could harm Quietus. And Byron, Paloma and Ditto had enough experience and sympatico when playing with them, allowing Ditto to fine-tune the sonic attacks. 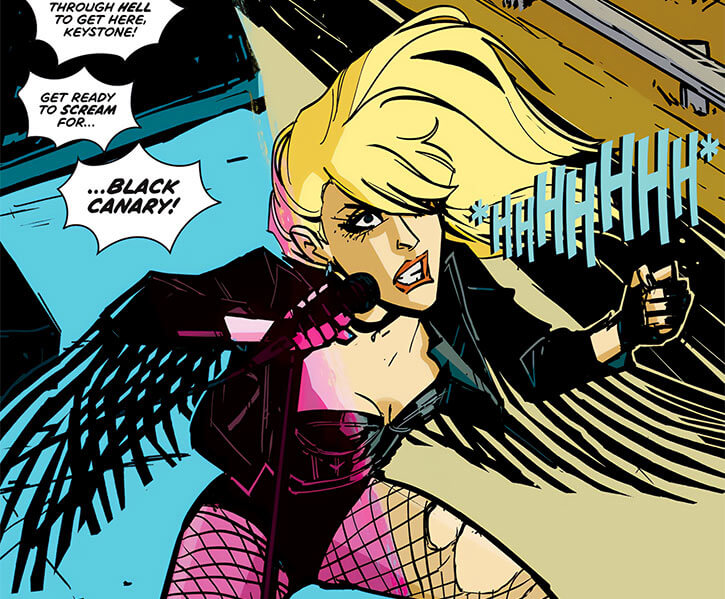 We will we will rock you (kick kick snare)

At first, the confrontation with the mighty Quietus seemed to fail. The monster absorbed every sound in the stadium, even with the mountain of amps.

But when Dinah rashly charged in, it was realised that the sonics had weakened Quietus and made it solid. The band struck it with cymbals, guitars, toms, mike stands, the smaller amps and everything else they had until it was forced to disperse.

Kurt Lance then surrendered to Amanda Waller’s agency, on the condition that they leave Ditto and the rest alone.

The aged Kurt having part-alien DNA since his time travel experience, Waller took the deal.

You got blood on your face, you big disgrace

With the EP and the tour done, the Black Canary band had closed its contract. Dinah felt she should let Bo front, especially now that Ms. Maeve also had an alien-enhanced voice.

While visiting Barbara Gordon in Burnside, Dinah also kept running into enthusiastic fans asking for selfies and autographs. Though she had loved performing with the Black Canary band, fame was making her uncomfortable.

During this visit, Dinah was instrumental in saving Batgirl from the Fugue (Vinton Burwell). She also fought Velvet Tiger (Lani Gilbert).

Dinah further ran an anti-terrorist mission for Batgirl, teaming up with Vixen (Mari McCabe) as an informal Birds of Prey revival. 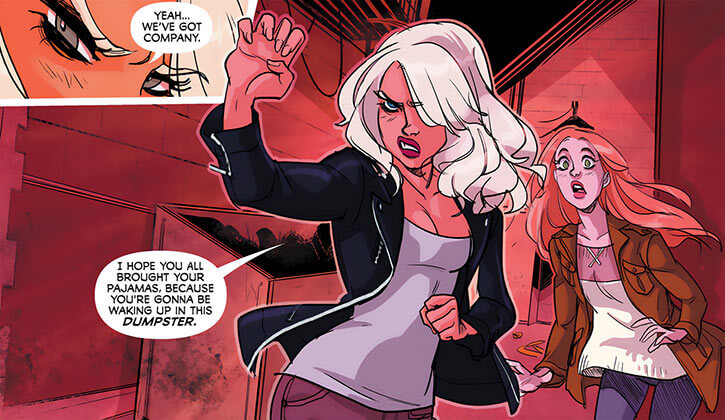 A less obscure possibility for a mid-2010s rock band with a Dinah-esque frontwoman would have been Kobra And The Lotus  . Although their sound is prolly too metal.

On the other hand they *do* have a song about Batman. And this one could even fit sonically…

She occasionally adds one or two bits for effect. Glam rock cape, long-fringed jacket, temporary facial tattoos, epaulets, a coloured fringe, translucent throat-to-navel panel in the leotard, a neck bandana, heavier makeup… Any random thing she wanted to try, or found whilst shopping. 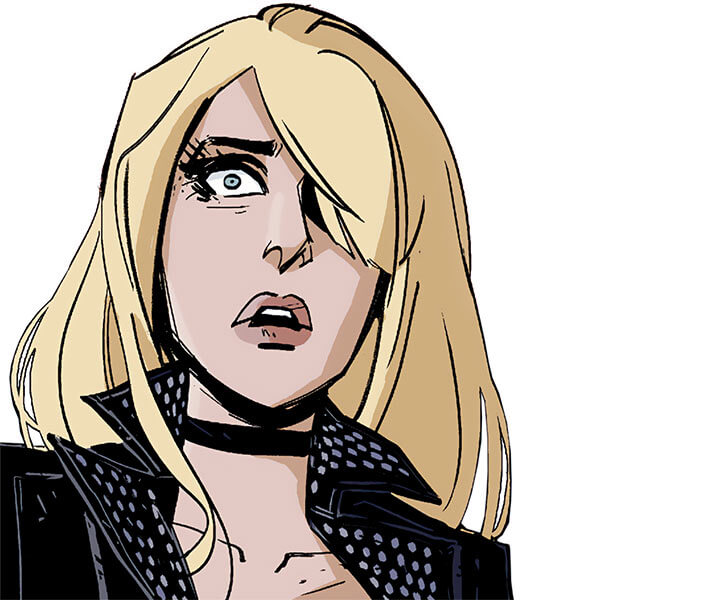 The world’s most dangerous band

This phrase (↑) was just a marketing idea to make the violence surrounding the Black Canary band sound exciting rather than dangerous.

But the band does have some unusual talents, and went through several weeks of self-defense training from Dinah.

Byron is the band’s creative director, doing a good chunk of the composing and writing. She’s also an adept bassist and drummer, capable of sitting in the pocket for an entire concert.

She’s the most adult and sensible BC member, and the most invested in the band’s success.

Lord Byron seems to have been Dinah’s best pupil in hand-to-hand training.

Paloma played guitar with Alas Insane. With Ditto’s arrival she switched to keyboards. She seems to prefer this, since she likes to experiment with software and electronics to create her own sound.

Paloma works with a customised Diviner keyboard, a MacBook and hand-built effect boxes.

She has a talent for tinkering with machines and tools, in general. This extends to automobile mechanics and even, as it turns out, to handgun operation.

Paloma tends to be introverted, and to have the keenest artistic sensibility of the band. She’s got a lot of music and sound work software on her iPhone.

Ditto is maybe 11, and completely silent. She cannot even hum.

She’s an adorable, calm and affectionate kid, and the band is fiercely protective of her.

Ditto is always wearing a hat – often an ushanka or a woollen hat, but she once wore a heaume during a concert. In the evening she’s usually found in her orange, striped, hooded, cat-eared pyjamas – presumably Tigger merchandise.

I’d imagine she couldn’t create hair for her human body.

Her alien DNA can be spliced into humans to allow them to manipulate energy. The exact results depend upon the implantee. The result with the most APs/Ranks is a sonic scream, as with Dinah. Lesser results include gravity lightening, pyrokinetics and increased speed.

But he was previously a student at Gotham Academy, which gives him ties to some fan-favourite characters. 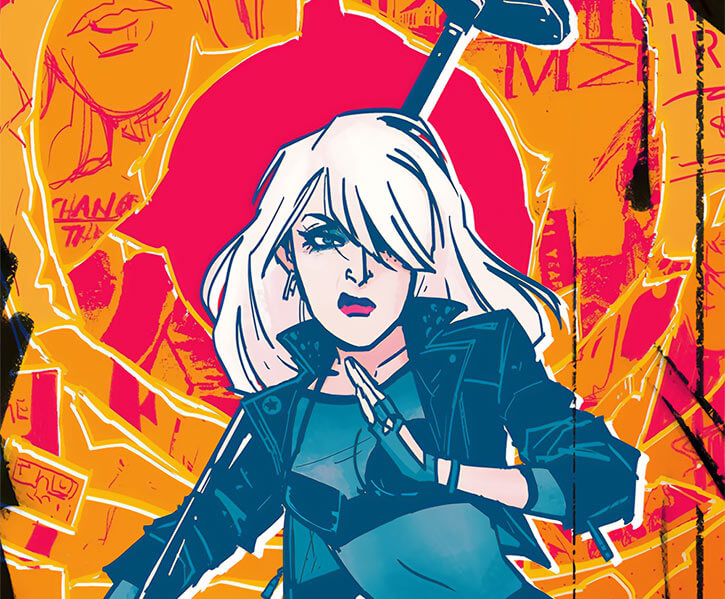 So mostly she hits bars, gets into brawls, acts cranky and drinks so-so whiskey.

Though Dinah’s catty behaviour and Babs’ #internetfamous #egotrip get in the way, she does rebuild her friendship with Barbara. She also develops ties with Frankie Charles.

Though her life is something of a train wreck and she has a crappy temper, Mrs. Drake-Lance is a deeply decent person. She’ll always take risks to save lives, protect the innocent and/or defend the defenceless.

And while she seems irresponsible, she actually cares. Her messes are more about bad luck and no-win situations.

Or, well, just because she’s pissed off and wants to hit something. That one happens a lot. But one notes that she almost always warns people before getting punchy, and will seek a reasonable compromise if there’s clearly one.

Kick out the jams

Initially, the climate within the Black Canary band is tense.

Paloma in particular hates how Bo was fired to make room for Dinah. And Dinah is uncomfortable with how the violence around her threatens the band, especially Ditto. She was worried enough to offer to leave on multiple occasion, but Byron wouldn’t lose a big chance at success.

However, they gradually gel together as they play, Dinah learns the craft, and everybody cares for Ditto. By the end of the tour Black Canary is a loving family of sorts. This makes it hard for Dinah to move on and let go of the stage, the band and the music.

Even with this sense of belonging, Dinah remains confrontational, grumpy, prone to violence, less than adept at handling frustration, and with minor self-destructive tendencies. Those who do not know how to handle her might not realise that she means well.

Dinah has expressed frustration with modern lifestyle aspects. Such as hipster bars, smartphone apps, Babs and Frankie being glued to their laptops, etc.. But she doesn’t seem to really dislike these things. She’s just a grump.

During this era, the big dark cloud over Dinah’s head is Kurt Lance. He was the love of her life.

But over a few years, she learned that :

Though Kurt did help Dinah with the Ditto situation, he had no memory of their life and marriage. Then he was seemingly slain when Ditto decohered, only to return as a much older man after travelling into the past.

Though Dinah still wanted to be with old!Kurt, she apparently agreed that the priority was to protect Ditto. Which meant Kurt Lance vanishing anew to be held by Waller’s researchers.

So, generally… not going to help with Dinah’s grumpy, aggressive temper. 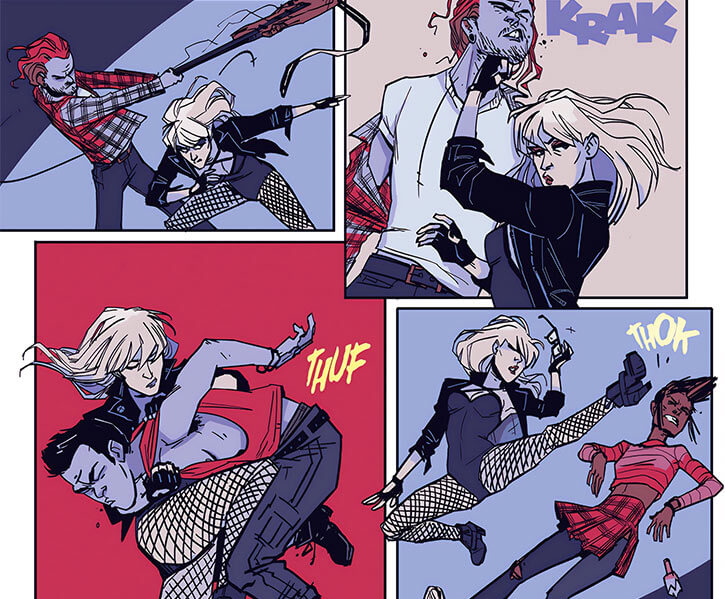 Since we don’t know how Black Canary — the band — sounds (look, this is *bothering* me, okay ?), another 2010s hard-sounding band with a notable frontwoman.

Something like mid-2010s Sleigh Bells  , though they do have an unusual set-up when live (guitar/guitar/drum machine). And the beats on Demons are almost trad hip-hop (think Run DMC with Jam Master Jay).

Now that I think of it it might be the closest bet. Though it might be because I love Sleigh Bells, yeah.

Replace the machine with an actual drummer with more intricate beats, have beefier vocals (since unlike Dinah, Alexis Krauss doesn’t have a super-preamp in her throat), and replace the second guitarist by specially-programmed keyboards.

A bit like Daft Punk’s infamous Aerodynamic  guitar solo was once thought to have actually been played on a synth.

You’d dilute Sleigh Bell’s excellent punk quality and have something more akin to power pop, but it’d work for Black Canary (the band).

“I’ve lived hard. Some of the things I had to do to survive weren’t nice. Maybe I made too many enemies, or maybe this is just karma coming back to bite me.”

“What do you want from me ? Do you think I’m in the Justice League ? I only did like half a mission with those guys ! Aliens are *their* problem !” 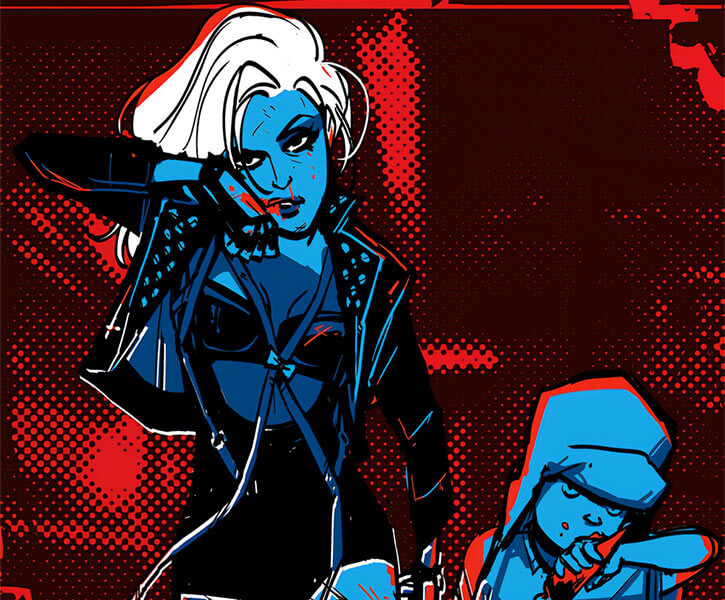 *Technically*, 3 APs of her Artist (Singer) are a Powered Skill, but heh.

Sonic Beam is arguably Minimal Marginal. I chose to avoid the clutter, but if a Player has Dinah use it all the time it’ll become necessary.

She has other abilities, but these are out-of-scope. As in, “not demonstrated at all during this span”. Once using her sonic power to fly, dual-wieldingUsing two weapons at once, one in each hand handguns, military skills, linguistic skills, etc..

Look, I *said* it was bothering me.

Most of this writeup was done with Unleash The Archers  on for mood. But Brittney Slayes, being a good lil’ metalhead, is a much more technical singer than Dinah would be. And the band is very strings-heavy.

But look at it this way. If Bruce Dickinson is Wolverine, then Brittney is X-23.