This character profile is *specifically* about *one* version of the character.

This corresponds to the Kicking and screaming TPB, and uh… that’s it. 😿

By necessity, this also includes :

Everything else is out of scope.

Writeups.org has coverage for many different versions and eras of Black Canary. Everything’s explained in our guide to Black Canary character profiles.

Though it covers a short era, this article ended up being oddly long. Since I took the space to write about the band and their music, and to explain the Ominous Conspiracy Stuff that took place during that run.

So it’s now split into halves. For the sake of those who, say, read on the go on their smartphone. The second half is there.

The entry also has multiple musical clips, given the subject matter.

Black Canary is a world-class melee combat expert. She normally uses unarmed techniques (primarily strikes), but can wield pretty much any weapon or object in close combat.

She also has extensive commando experience and training, specialising in infiltration. Mrs. Drake-Lance served with what likely was the deadliest strike team in the world.

She’s trained in operating a wide variety of land and sea vehicles, and numerous types of handguns. 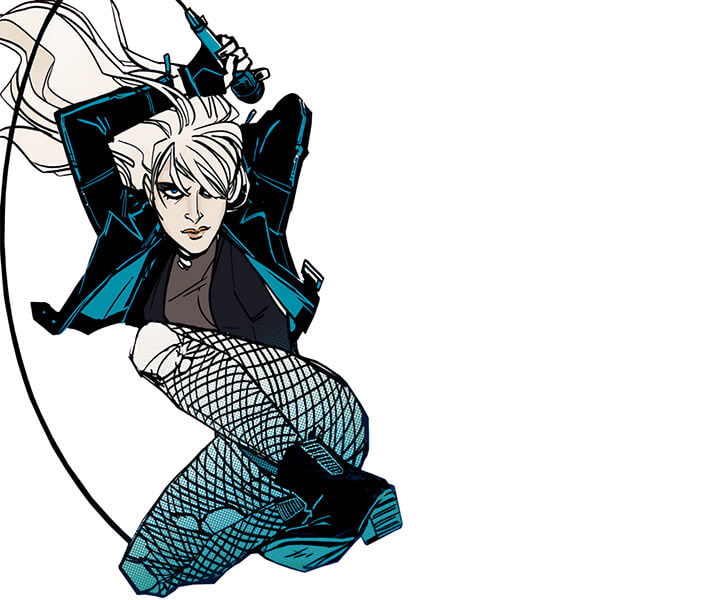 From there, actual musicians in Ashes of Sunday and Black Canary taught her stuff such as :

Drake-Lance can emit a powerful sonic beam by screaming. It was inherited from genetic alterations done to her mother.

Her yell can shatter concrete.

In most circumstances she prefers not to use it, since it’s the equivalent of firing a rocket launcher. She has good control over it, but it hits hard and collateral damage is a genuine risk.

Her sonic power could have other applications, but there’s nobody to teach her how. During this era, she is shown a vibration that disrupts a specific cloaking/invisibility tech. But Dinah likely can’t do it without being given the note to harmonise with.

Her sonic power is also the main explanation behind her singing voice. In particular it seems to allow her to be loud with little fatigue or distortion.

Distortion is just the worst. 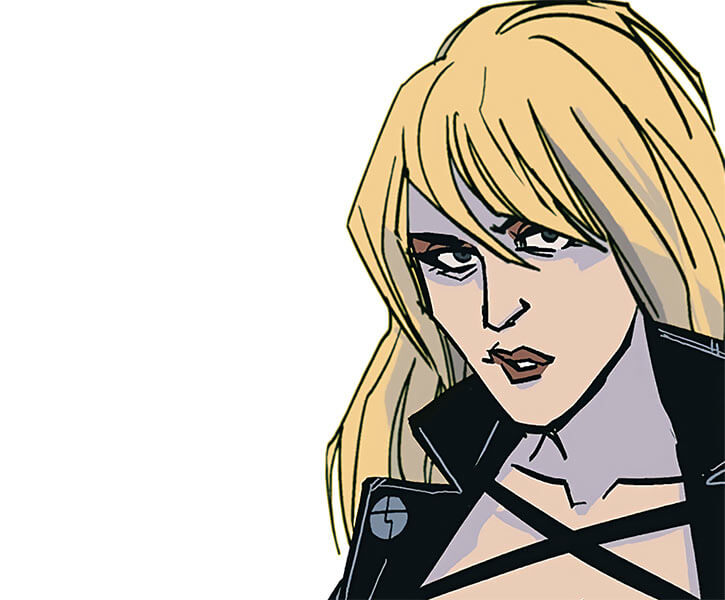 Though the story is about a rock band, we don’t quite have a sense of the music in the material itself. So I’m going a bit blind (well, deaf) here. That bothers me.

But since we have an all-women hard rock band during the mid-2010s, who seems to have a retro sensibility, my (semi-obscure) first stab would be the 2014/15 Thundermother  format. Clare Cunningham does have a Dinah Drake vibe.

It’s a much more strings-heavy band (since they’re heavily channelling AC/DC from, well, before they were born) but it’ll do as a first pass.

As a young child, Dinah was abandoned by her mother. She was fed into Gotham City’s derelict foster parenting system.

Her last fostering placement was with couple Tammy and Dave for several years, along with a boy her age. Though the foster parents didn’t seem unreasonable, Dinah was an angry and rebellious child. She ran away at age nine, living on the street.

One of the alleys where she went dumpster-diving was behind a dojo.

Sensei Desmond Lamarr soon caught her, and took her in. He lodged and fed her in exchange for keeping the dojo clean.

Over time, Dinah came to do most of the day-to-day management of the dojo. She also adopted Mr. Lamarr as a father figure.

After that, she painfully let go of her fantasies about how her mother would come back to her.

Dinah soon joined Desmond’s students, and proved herself a prodigy in the martial arts.

By age 16, she was fully qualified as a teacher and studying Desmond’s most advanced techniques. However, Mr. Lamarr died of brain cancer soon after that.

Hope that this senpai never notices you

Sensei Desmond had bequeathed the dojo to Sensei Dinah. Street gangs attempted to racket it now that Mr. Lamarr was gone, but Dinah thrashed them.

However, the gang threat forced some students to quit, and the dojo was barely clinging to break-even. Having the sensei be a 17-year-old girl likely didn’t help with marketing.

Some months later, disaster struck Gotham. Despite the Batman (Bruce Wayne)’s efforts, the Riddler cut the power across the entire island.

He did so shortly before a superstorm was due for landfall.

Among the millions caught in this was a person of interest to American intelligence. He was being hunted by Ra’s al Ghul’s ninja.

The man died near Drake’s dojo, and gave her a small box.

The ninja after the box hunted Ms. Drake. There eventually were too many for even her, but a US military intelligence team came in.

The commando’s leader, John Lynch, was so impressed by young Dinah’s fighting skills that he recruited her. As Drake’s dojo had been destroyed during the disasters, she enlisted.

Dinah Drake and Kurt Lance were Lynch’s two best agents, and an item. When Lynch created ultra-elite Team 7, they were the, err, linchpins of that commando unit.

Shortly before a mission to Gamorra Island, Lance married Drake.

The mission went particularly bad. Dinah thought that she had accidentally killed Kurt – and most people in a huge radius. She had to drop out of the service.

Birds of Prey in brief

She later became an operative for Barbara Gordon’s Birds of Prey.

However, Drake-Lance semi-betrayed the team to save and restore her husband, whom she discovered was still alive but comatose.

He was eventually healed but was mostly an amnesiac. Dinah eventually handed him over to Team 7 alumni Amanda Waller (no relation) in the hope that she could more fully restore him.

But Batgirl (Barbara Gordon) resented Black Canary’s actions. She shut down the Birds, and the two no longer were on speaking terms. 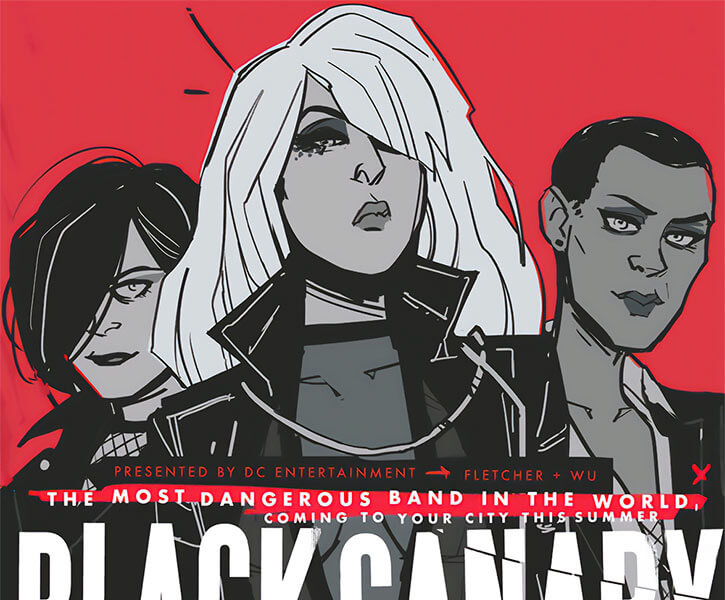 Dinah lost her apartment in a fire, accidentally caused by Barbara’s equipment. That forced her to hit the couch at Barbara and her roommate Frankie’s place whilst getting her insurance sorted out.

Though this wasn’t easy, they eventually patched up their friendship.

Dinah’s quest to find a bar in Burnside that wasn’t an artisanal microbrewery led her to meet the Ashes of Sunday band. These obscure local rockers were looking for a singer, and they loved Dinah’s voice.

With Drake-Lance fronting, the band picked a good gig. It was a big launch party for popular dating app Hooq. When the concert was attacked by drones sent by a rogue A.I., Dinah was instrumental in destroying them and carrying on with the show.

After the concert, the A&B label recruited her. Ms. Drake thus left for a tour.

However, she’d briefly return to Gotham with her band for the marriage of Barbara Gordon’s close friend Alysia Yeoh.

The new band apparently did hard rock or modern garage rock. But the core musicians came from an earlier band with the same label, Alas Insane, which presumably did revival glam rock.

(“Alas Insane” is a David Bowie reference – the album Aladdin Sane (1973)  , or phonetically “a lad insane”. The story assumes that all the characters are too young to catch the reference, which doesn’t make me feel old at all.)

Alas Insane had been an all-women trio, with :

But Maeve’s ego kept getting in the way. The label thus made sudden changes. Maeve was thrown out, a new singer and a new guitarist were parachuted in, and Dinah was encouraged by the label to rename the band “Black Canary”.

Once Black Canary — the band — found its sea legs, they were offered a lucrative one-record one-tour contract with a decent marketing push behind it. They were assigned still-a-minor tour manager Heathcliff Ray, and veteran roadie Florence Mandelbaum. 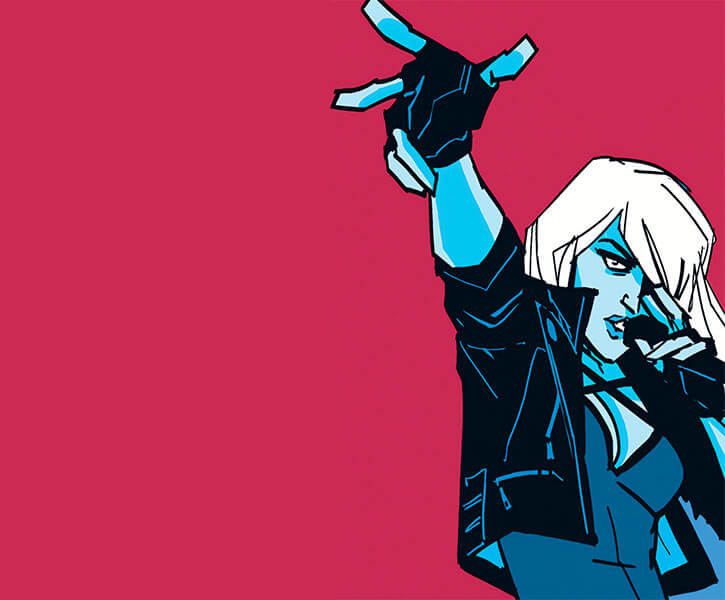 The entire process had been… weird :

Furthermore, the tour soon turned into both a triumph and a disaster.

The triumphal aspect was that the performances were good and rapidly progressing toward excellent. A solid buzz spread among underground rock fans and metalheads (plus, presumably, YouTube promotion by the label).

The disastrous aspect was that most performances ended in costly brawls. The sets were played in rowdy clubs, and Dinah’s hair-trigger temper meant a litany of fights and grudges. Several minor enemies of hers also attacked during concerts, leading to even bigger fights.

Walk on the wild side

Thus, concerts consistently lost money in destroyed equipment, legal action, damaged clubs, or Dinah ruining her fishnets ($3+/pair) and using her mike as a flail and whip in combat ($20+ per). Their Detroit concert alone cost $50K+ by demolishing half the club during a fight with some sort of aliens.

The young tour manager ended up adding a “America’s Most Dangerous Band” tagline to the Black Canary fliers and posters. With the touring budget annihilated, the band ended up in an old minibus and camping in the woods to save on costs.

The climate among the band was wobbly at first. Paloma in particular resented Dinah for being but a glorified karaoke sensation. And Dinah felt that she was putting the band at risk.

But over the weeks they bonded on stage, over caring for their absurdly underage guitarist, and through fans’ energy.

Over time, the band realised that a good chunk of the attacks wasn’t directed against Dinah, but against little Ditto. The kid guitarist was hunted both by weird aliens, and by a covert paramilitary agency.

To Dinah’s shock, the field leader was her husband, Kurt Lance. Mr. Lance ended up travelling with the band, to help protect Ditto against the intensifying alien attacks.

Bo Maeve also briefly kidnapped Ditto as part of her revenge against the label for firing her.

The band will be back after a short break !

This entry continues in its second half. Starting with an explanation about all this aliens and spooks business.