Sanderson can fly at up to 500 mph in level flight.

His whole body is tough enough to withstand the impact of bullets.

He can project a force field which he uses as a battering ram.

Sanderson was born to a middle-class family in Harlem in 1913. His father, Earl Sr., was a railway porter and his family was fairly well-off by contemporary standards. Earl Sr. was a great believer in education, hard work, the Brotherhood of Sleeping Car Porters (his union), and the necessity of struggle in order for Black Americans to achieve equality.

Sanderson then returned to America and earned a law degree at Columbia . Upon graduation in 1938 he went to work for his father’s union and the US Communist Party. His increasing distaste for the Party’s rigid dogmatism resulted in his falling away from it. He resigned in shock over the Nazi-Soviet Pact.

After Pearl Harbor he volunteered for the Air Corps. After a certain amount of maneuvering and string pulling, was assigned to the all-Black 332nd Fighter group , the “Lonely Eagles”, arguably the best American fighter group in the European Theatre.

Earl ended the war with 53 unconfirmed kills (official records were not kept for Black pilots). That made him the #2 American ace of the war, after Jetboy.

While based in Italy, he met and fell in love with Orlena Goldoni, 24, a cabaret performer and Anti-Fascist underground fighter.

After the war Sanderson returned to the States, Lillian, and his work as a civil rights attorney.

He was stricken by the Wild Card Virus in 1946. Sanderson became an ace, consciously using his powers to publicize the cause of civil rights and to mold himself into a symbol for Black aspirations. He was soon recruited by Archibald Holmes for the Exotics for Democracy, better known as the Four Aces.

Things fell apart in 1950, when, in a growing climate of fear, the Four Aces were summoned before the House Un-American Activities Committee (HUAC) . Sanderson could not stand silent before the committee, most of whom were bigoted Southern rednecks. He eventually denounced them to their faces and was sentenced to five years in prison for contempt of Congress.

Sanderson was told by his associates in the civil rights movement that he had set the cause back by 50 years. He was asked to disassociate himself from it. He left the country, flew to Switzerland, renounced his American citizenship, and never saw his family again.

Through the 1950s he did not permit his name to be used in association with any cause. He lived off and on with Lena Goldoni, who was now an established actress, until her death in 1971.

When the civil rights movement took a more militant turn in the 1960’s, Earl’s name was often invoked and the Black Panthers  even imitated his style of dress. But Sanderson kept to himself. He’d simply been away too long.

By the 1970’s, he was more or less permanently settled in Paris, in an apartment he’s inherited from Lena. People solicited his aid for various causes. But he was wary of being used, and if he gave help it was always quietly, without publicity. He died of a cerebral hemorrhage in 1979.

Sanderson is about average height, and well built. He is Black with fairly dark skin coloring. When flying or in combat he wears a black leather flier’s jacket, white silk scarf, leather flying helmet with goggles, and jackboots.

Under the jacket he usually wears tan Air Corps fatigues with the insignia removed. He carries a black beret stuffed in a pocket, which he dons after landing. His jacket has the 332nd fighter group patch on the shoulder.

Sanderson is a tough, compassionate, very intelligent human being. In his early days he was glad to lend his help to causes, whether social, political, or what have you.

Toward the end he was a recluse, shunning the spotlight and wanting nothing to do with any publicity.

(At the HUAC hearings): “I have better things to do than incriminate myself in front of a bunch of Fascists !”

“Let them say what they will. I can still fly.”

Sanderson properly belongs in the JSA period of DC history, and his personal history can remain the same.

The Eagle and the public

Black Eagle remained pretty constant in his abilities across the years. His real changes come in the way he is perceived by the public. During the McCarthy hearings and after, he is a virtual outcast among even his own people, and has Mistrust.

During the civil rights heyday of the 1960’s and early 1970’s, he was somewhat of a mythic hero to the counterculture because of how he stood up to the establishment. But the civil rights advocates would rather not have his direct support, as he was more useful to them as a mythic figure or martyr with no opinions of his own.

The Black Panthers patterned their “look”, with black berets and leather jackets, after him. Toward the end of his life he was remembered mostly with ambivalence, and does not have the Social Stigma Drawback.

Social Stigma is essentially a limited form of negative reputation, in which the mention or knowledge of the stigma gains the character negative penalties on a Persuasion attempt to any who are not listed as Connections.

Instead of Column Shifts, however, The penalty is measured in single AP’s. The OV of any Persuasion attempt is raised 1, 2, or 3 AP’s, depending on the severity of the Stigma. Black Eagle had the +3 version at the height of his difficulties, which subsided to +2 during the height of the Cold War, subsided to +1 during the 70’s, and was negligible during the 80’s. 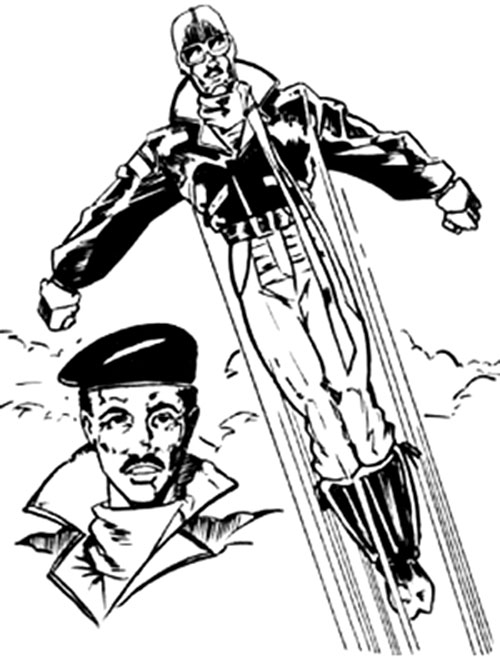