This profile is part of a series. The goal is to explain the character and show how he evolves. But in smaller bits, not as a giant article.

This profile only uses data from the 1990s and the year 2001. So for instance Jeff doesn’t have children – they were retconnedMaking changes to a character or story after the fact in later on.

If you need more guidance than a mere list, check our guide to Black Lightning character profiles.

The basics of Black Lightning’s abilities are unchanged. The main evolutions are : 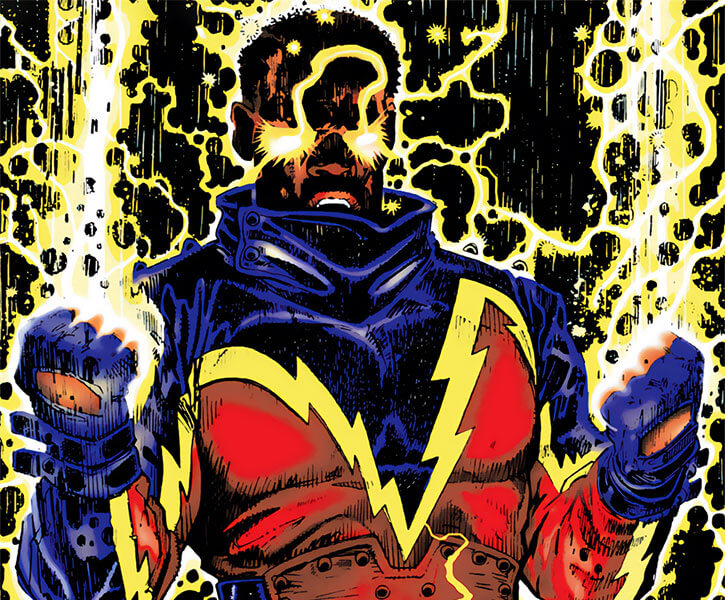 One of 1995’s hit tunes was Montell Jordan’s “This is how we do it”, a sort of funk/hip-hop party music hybrid. I think it was classified as R&B back then, but what “R&B” means changes every decade.

In the US, it seems to have been a somewhat-brief-lived hit among White listeners – but much more enduring among Black audiences as, well, party music.

Black Lightning’s biography is identical to the one revised during the 1980s, in Secret Origins.

The loose leaves 1990s Who’s Who in the DC Universe adds the following details :

Another small retcon is that Jefferson’s powers were fully reawakened after the 1989 Invasion!, when the Dominators detonated their Gene Bomb. How that aligns with his gains during the 1980s The Outsiders runs is unclear. 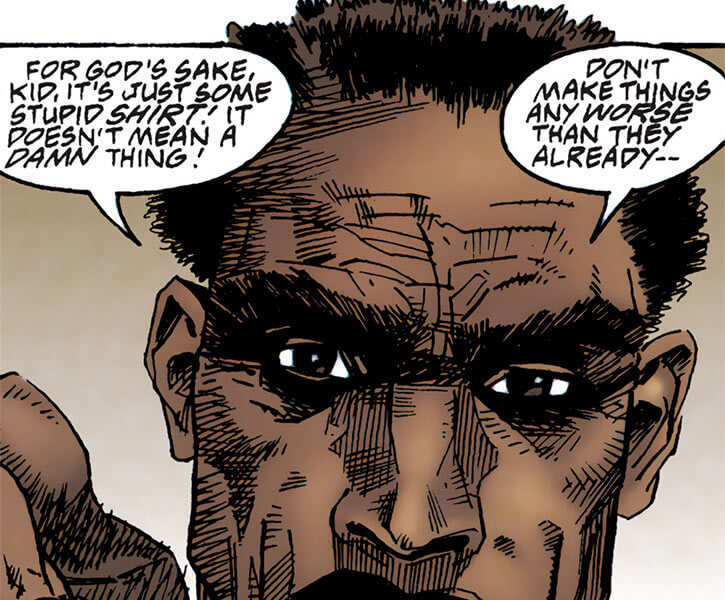 With his renewed abilities came a renewed sense of purpose.

Pierce got a Wayne Foundation Grant to fund his work (inner-city improvement, though Batman sees it as a cover for Black Lightning). He then moved to Carver Neighborhood in his father’s hometown, Cleveland (Ohio).

Carver Neighborhood, a.k.a. the Brick City, was an economically depressed borough. Its serious drug problem was exacerbated by numerous warring gangs. Pierce stepped into this two-fold:

Pierce had several friends to help him in his war.

Black Lightning’s first ally was a contact named Beagle, a street informant who lived in a VW Bug parked in an alleyway. Beagle had all sorts of street connections, even extending to cities as far away as Los Angeles and Gotham City.

Beagle put Lightning in touch with Commissioner Latimer. However, Latimer’s ability to help Lightning was rather limited. The city officials disapproved of the Brick City in general – and Lightning in particular.

Still, Latimer unofficially assigned Detective Tommy Colavito to work with Black Lighting. Colavito ran interference between the police and Lightning, as well as passing information along both ways.

Jefferson Pierce’s struggle in the Brick City was difficult.

Despite all of this, Black Lightning still made inroads in improving the neighborhood.

He was also a reserve member of the JLA and played a supporting role in a number of missions during that time.

After Lex Luthor’s election to the presidency, Jefferson Pierce accepted the position of Secretary of Education.

He defended the White House as Black Lightning during a 2001 alien invasion, taking care not to expose his secret identity. However, Luthor already knew of Pierce’s alter ego, though Pierce in unaware of that fact. 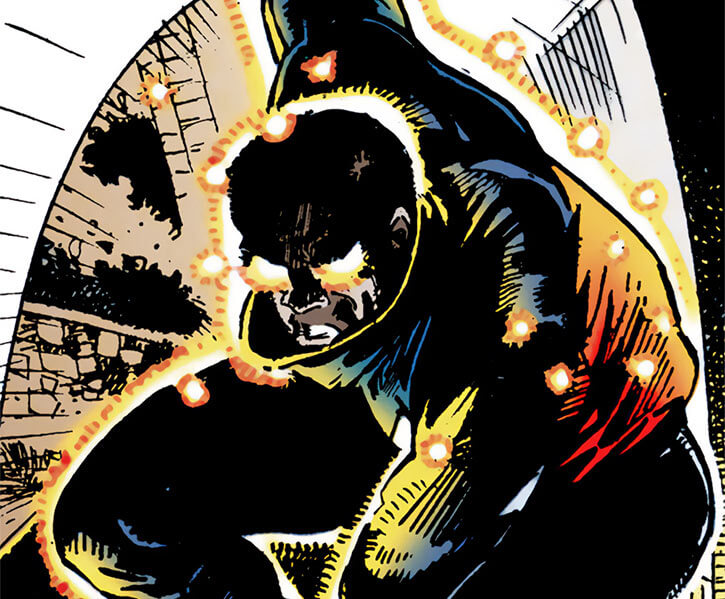 Jefferson Pierce is a tall, athletic Black man. He has a short haircut and the beginning of age-wrinkles. He dresses in relaxed formal wear as Jefferson Pierce.

As Black Lighting, he wears a set of dark blue biker’s leathers. The high-collared jacket has rust-colored panels trimmed with a golden lightning bolt design.

Lightning does not wear a mask. He instead keeps a constant crackle of electricity surrounding his body in a nimbus, to obscure his features. 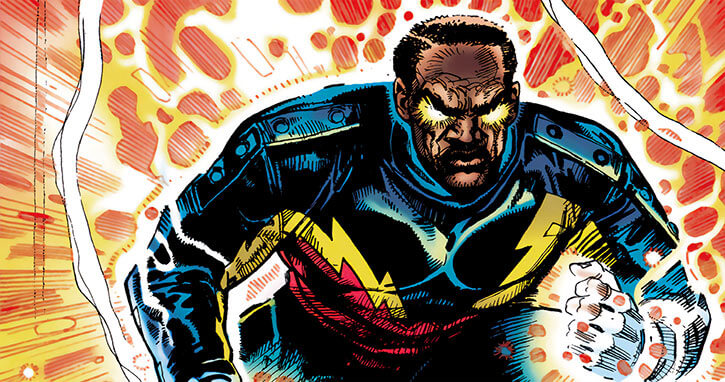 Black Lightning is serious and determined, but still maintains a good disposition and even a dry wit. He takes the concept of civic improvement in all of its aspects very seriously. Thus, he tries to be as inspirational as Jefferson Pierce as he is intimidating as Black Lightning.

He is still greatly troubled by all of the deaths that he has failed to prevent. While he has a tendency to take the weight of the world on his shoulders, he usually does it with a fair amount of good humor. He takes his work seriously, but takes a great and contagious joy in working to make a difference.

Black Lightning uses his powers in much the same way as Batman uses his gadgetry. These are support to augment his skills, rather than something he relies on.

Also, much like his mentor, he won’t kill his opponents (even Painkiller’s death was unintended). Jefferson usually avoids inflicting serious injury unless he’s making a point. Such as breaking the arm of a gangbanger that ordered a hit on one of Pierce’s students.

“We have some serious concerns in this city — education, jobs, health care, housing, not to mention government indifference. Frankly, you gang morons are distracting me from the *important* issues of the day.”

(After breaking a gangster’s arm) “Three things you should take to heart, Del. One: the Royals recruit any more kids and I come looking for you. Two: you only have three more limbs. Three: after that I have to get *creative*.”

“Classrooms come and go. [But] education endures. I came here to teach — and I can do that whether I’m in a classroom or the locker room… or out on the street.”

While in costume, Black Lighting usually leaves Electric Being on at 1 AP to disguise his features and to keep Full Vision active. He won’t increase it to more than that except in combat with other metahumans to avoid accidental collateral damage to people or property.

Guilt (those he couldn’t save), Mistrust, Secret Identity (Jefferson Pierce).