Black Mace is an obscure opponent of the Legion of Super-Heroes, first seen in 1968. This here profile covers the classic, pre-1994-reboot version of him.

He’s a super-fighter with a big stick. So for those of us who like simple and effective approaches, that’s good.

Black Mace is “gangland’s answer to Karate Kid” or Timber Wolf. That is, he’s superhumanly strong and tough, a fast and all but invincible fighter.

Black Mace is possessed of a unique combat agility that permits quick, complex movements in the course of a battle. His limp vanishes in battle as well, returning only when his adrenaline levels go back to normal. His high combat skills and raw physical power make him a threat to almost any Legionnaire. Even such powerhouses as Timber Wolf or Ultra Boy.

His name is derived from the massive medieval-looking mace he carries. It is made from an almost indestructible alloy. The mace is also charged with electricity which can shock and weaken opponents, and at full strength can incinerate them. Black Mace wears an insulated suit to protect himself from the mace’s energy field.

Mick Yardreigh of Earth was born in the latter half of the 30th century. A bully and a thug, he used his superhuman strength to build an impressive career as an enforcer and mercenary.

Named for the deadly energy mace he carried – made of an experimental metal on the Science Asteroid, and apparently acquired during a robbery – Black Mace began to turn up more and more frequently in the reports of the Science Police.

This brought him to the attention of Earth Science Police Chief Zoltorus. Zoltorus brought Black Mace in for a private conference after one of Yardreigh’s stays on the prison planet Takron-Galtos. Zoltorus was corrupt, living a double life as a respected cop and mob leader.

Chief Zoltorus purged Mace’s criminal records, and hired him to put together a team of superhuman agents to serve the Taurus Gang. The superhuman members of the Taurus Gang became the core of a notorious mob fighting for control of the underworld in Metropolis and beyond. With their powers and Zoltorus’ inside information, the other mobs were forced to band together.

This new group, Scorpius, forcibly recruited members of the Legion of Super-Heroes to help them beat Taurus. Black Mace and the others demanded more money from Zoltorus, since their job was now harder.

When Zoltorus refused, Black Mace and the others abandoned him during a battle with the Legionnaires. Zoltorus was exposed and captured. Black Mace and his teammates went underground and then apparently went their separate ways.

Mace presumably took other unchronicled mercenary jobs after that time. He was encountered by the LSH again in 2981, when his personal starship crashed on Nolgor IV. This was a waterless, barren world in the Talok sector. Legionnaire Timber Wolf was passing near in a Legion cruiser and picked up the distress call. 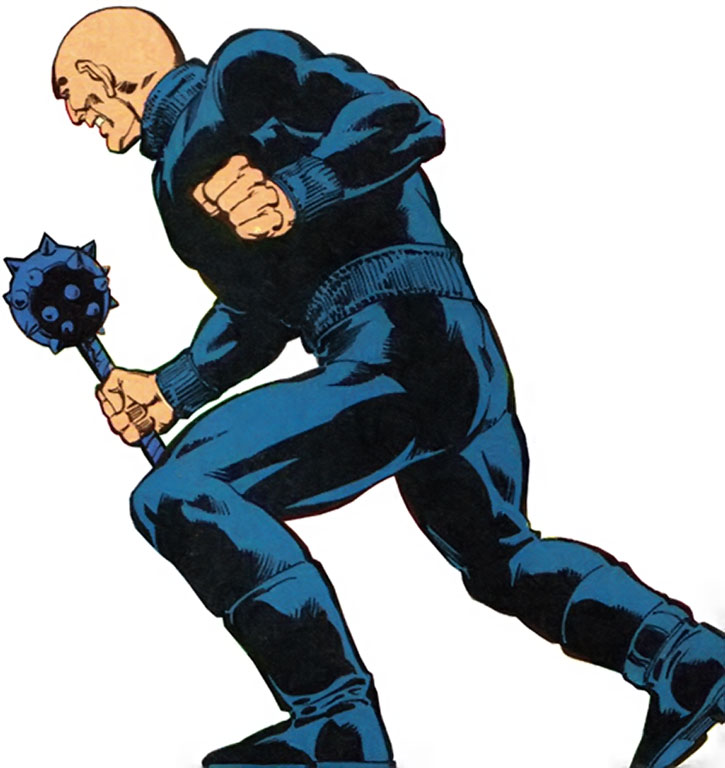 When he investigated, Black Mace ambushed him, stunned him, took his Flight Ring, and tried to steal his cruiser. But he ran afoul of the ship’s defenses. This enabled Timber Wolf to turn the tables and capture Black Mace.

Yardreigh spent the next several years in prison back on Takron-Galtos. He was reportedly evacuated to Labyrinth when Takron-Galtos was destroyed during the Crisis on Infinite Earths.

Black Mace was released from prison in 2990. He was lured to Earth by the Dominators, who placed him in their genetic experimentation chambers. He was mindwiped – a form of brainwashing that left his skill intact, but made him loyal to the Dominion.

Black mace was among the subjects who survived the destruction of the chambers. These were taken into custody by United Planets authorities, supposedly for them to attempt deprogramming.

He’s bald, scowls except when he’s sneering, wears a black bodysuit, and has the remnants of a prison ball-and-chain attached to his right ankle.

Since he’s never bothered to remove it, this may be some kind of affectation or statement. Maybe he just thinks it makes him look tough. He looks pretty tough regardless.

Black Mace is a hardened professional criminal, who’s in it for the money. He’s not interested in conquest or revenge, just cold hard cash. 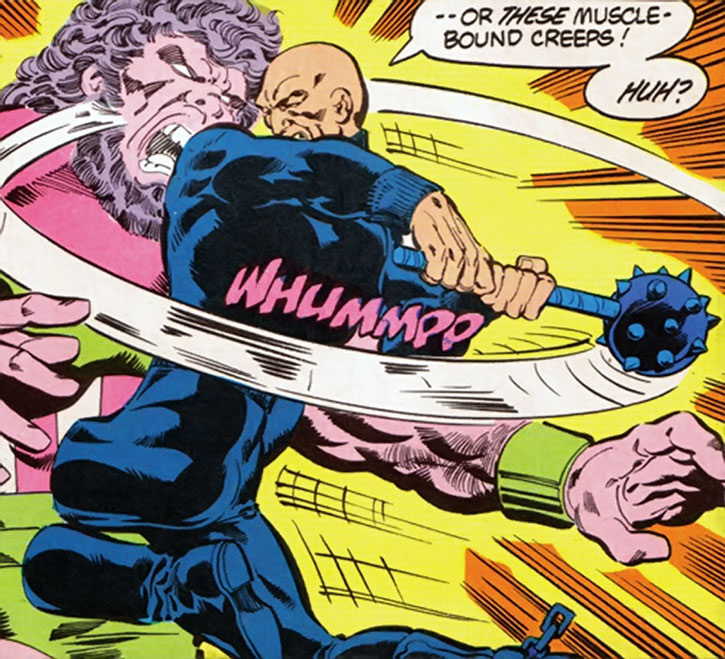 He uses violence to get what he wants, but doesn’t go out of his way to kill sadistically or randomly. Yardreigh doesn’t want any unnecessary murder raps. He’ll willingly take hostages or kill if it benefits him, though.

“Pick up that pouch and finish handing it over, lady – or you can be on the ground bleeding, too !”

“I’m called Black Mace, lady, and I’m not afraid of anybody – not Legionnaires, princesses from fairy tales, or these muscle-bound creeps !”

“Get back, ‘Legionnaires,’ if that’s what you are – or you can watch me crack your little partner’s head like a shell !”

“Even if I underestimated you, you’re still no match for Black Mace !”

“And Taurus is gonna owe me a bonus for this one, too. Those punk kids got on my nerves.”

“I’ll still warn that asteroid rat… more dough, or I’ll squeeze it out of him !”

“Still breathing are you ? That means you’ll die slow !”

“Maybe I’ll take you along for awhile…but don’t try nothing ! I got my mace turned up to full power ! One dose of it, and – POOF – you’re just ashes !”

“I’m watching you ! One false move and you’re through !”

“You tricked me ! I don’t know how you did it…but you’ll pay with your life !”

The electrified mace and protective suit are only shown definitively in one story. In Black Mace’s other appearances his mace shows no energy aura and seems less effective, so I’m treating it as a late upgrade to his mace. An alternate take might be that the Lightning and Numb powers of the mace are Seriously Marginal.

In the same story that introduces the energy mace, Black Mace beats Timber Wolf in Grappling. This is a level of STR he doesn’t show in other stories (Timber Wolf has STR 17). This could mean that Black Mace’s STR has increased radically, or that Timber Wolf is somehow mysteriously out of HPs. But Black Mace has already burnt up a lot of HPs by that point in the story anyway.

So I’ve explained it by giving the Mace the Numb power (this is not the only reason for the Numb power !). It’s not a perfect solution – but that story was written during one of the most inconsistent and continuity-confused periods in Legion history.

By Chris Cottingham and Sébastien Andrivet. 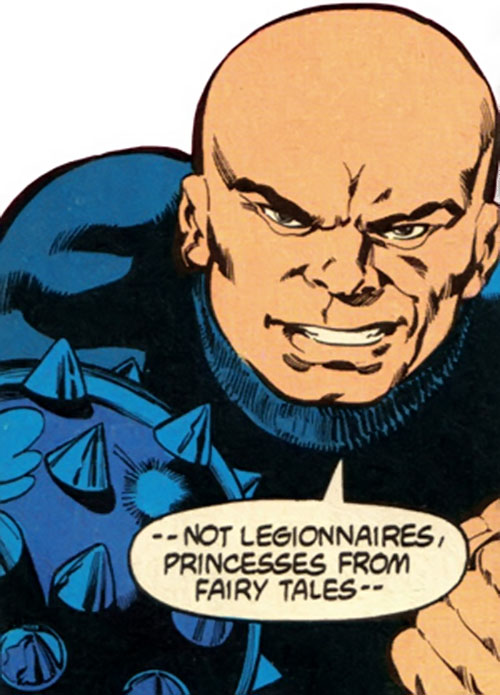 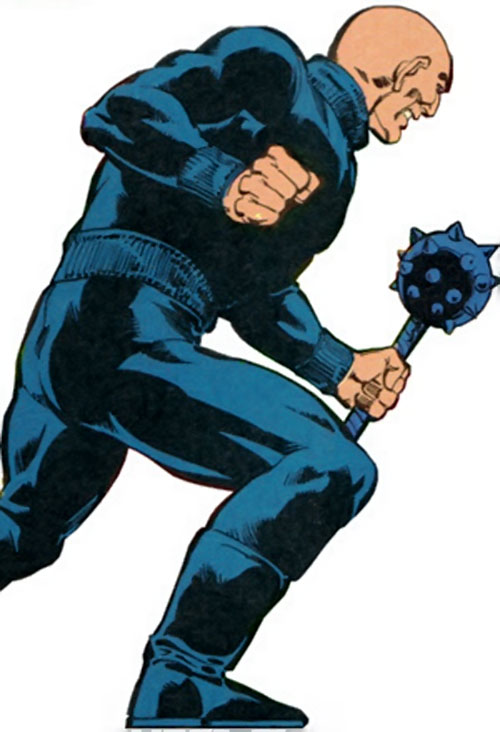