Mariah’s touch rots any organic material she comes into contact with. It burns flesh on contact, quickly turning regular humans into withered husks.

The touch used to take longer to affect ’dead‘ organics, such as taking an hour to erode a wooden chair she was tied down to, but this no longer seems to be a problem.

It is not controllable, so she has to constantly wear long gloves, and be careful not to allow others to touch her exposed skin. However, Mariah is able to disperse her brother’s ward by touch, even when unconscious. So presumably he can do the same to hers.

A skilled witch, Mariah has a fair knowledge of the occult. She has erected mystical traps in the past.

She allegedly has the ability to erect a ward, a solid invisible field. This is presumably the same as her brother is capable of, and so requires her complete concentration to maintain.

Mariah is also a highly skilled information gatherer, with connections worldwide. She is able to assemble a large amount of data on a subject in a relatively short time.

As a child, Mariah was always arguing with her brother, Oscar. This habit that caused an accident during a family trip. The argument distracted her father while he was driving, sending the car off the road and killing their parents.

Mariah maintained her enmity with her brother. They both developed similar abilities, and occult interests. Oscar, now calling himself Wilde, eventually captured Mariah’s death, gaining power over her.

Mariah became the information broker for the city of Bête Noire, one of three cities which shape the world. She became one of the main aides to its Magistrate, Doctor Juris. She also met the city’s Chief Enforcer, Shadow Boxer. As he proved to be immune to her touch, she began a relationship with him.

She developed an animosity with Dolf, the owner of the Furor’s bar, mainly due to his racism.

When the Fallen Angel came to Bête Noire, Mariah came into conflict with her fairly quickly. The Angel been hired to rescue some Romani children that Mariah was selling into prostitution. The encounter left Mariah under a curse which forced her to flee Bête Noire.

Eventually removing the curse and returning to Bête Noire, Mariah appeared to the Angel at her day job, as physical education teacher at a school.

Drawing her into a wooded area, Mariah kept herself hidden as she offered the Angel “The Shard”, a relic she’d been seeking for a previous client, which Mariah had previously stolen, in exchange for help, eliciting an agreement to meet later. The Fallen Angel didn’t wait, appearing at Mariah’s place, from where she abducted her.

After being tortured, Mariah told Angel the location of the Shard. But she neglected to mention that she’d trapped the place in preparation for the Angel double-crossing her. Escaping from captivity, Mariah was found by Boxer, who’d been searching for her, and taken to Bumper’s for attention.

It was there that Wilde found her, demanding that she turn over the Shard which she was to deliver to him. The Fallen Angel soon arrived, mainly due to curiosity, and decided to help Mariah. The Angel managed to release her death and freeing her from Wilde’s control. Wilde left.

When Boxer went missing, Mariah was suspicious of Juris’ assurances that he was on a mission. Once Juris finally took her to Boxer’s grave, she knew he was lying when he said that the Fallen Angel had killed him. Vowing to get revenge on Juris, Mariah formed a secret alliance with the Angel.

It was a couple of decades before she got to see Juris die. This happened as he handed his curse down to his son, Jude, and tried to leave Bête Noire. Upon passing the city limits, the aging which the city had saved him from all rushed in at once. Mariah and Fallen Angel watched him rapidly age into a withered husk.

By this time, Mariah had begun a relationship with Malachi, a former friend of the Fallen Angel, who was also immune to her touch. He was now an operative of the Hierarchy, who really ran the city. This brought him into conflict with the Fallen Angel, so the uneasy alliance between Mariah and the Angel became even shakier.

When the Hierarchy staged a coup against the new Magistrate, Mariah was the first casualty. She was stabbed by Wilde, who was now working for the Hierarchy. Badly wounded, she was left unconscious in Furor’s, under Dolf’s care.

Unfortunately Dolf saw her as a threat to his beloved Fallen Angel, and tried to smother her. He was stopped by Slate, the city’s Chief Examiner, who was in turn killed by Dolf’s employee, Ezil.

Recovered by Malachi before Dolf could do anything else, the unconscious Mariah was used to disperse her brother’s ward. She came to as the Fallen Angel’s forces were fleeing the disappearing Bête Noire.  This is when Mariah learned that Malachi had been killed by the new Magistrate, Moloch.

Calm and composed, Mariah always tries to keep control. She is always looking for the best way to play a situation.

Part of her detached demeanour is likely due to her inability to touch most people without seriously damaging them. As a consequence, her every move has to be thought through before she acts, and she’s always planning ahead.

She rarely lets grudges get in the way of her plans. For instance she established an uneasy alliance with the Fallen Angel, even after she tortured Mariah. It doesn’t mean she’s forgiven her, just that she’s capable of putting the hatred aside to achieve other goals.

“I’m Mariah. Black Mariah by the more literal-minded. Welcome to Bête Noire. May your stay here be eventful and short.”

“Sound vicious. I hate to think of you in so much pain. Wait, I forgot. You tortured me once, so I actually don’t feel that way at all.”

Mariah: “The only thing that differentiates people is their pretensions.”
Jude: “And their sense of good versus evil.”
Mariah: “That would be the pretensions.”

Jude: “Mariah, are you certain of this ?”
Mariah: “Quite certain, the signs are all there.”
Jude: “Signs ? Mariah, I thought you gathered information from… I don’t know… sources… ‘signs’ ? That sounds close to fortune-telling or whatnot.”
Mariah: “There are all manner of sources, Magistrate.”
Jude: “That’s true, but I’d take the word over a person over, say, the entrails of a goat.”
Mariah: “Don’t be too certain. People have the guts to lie. A disembowelled goat does not.”

Mariah is allegedly capable of projecting a powerful Force Field similar to that of her brother. But this hasn’t been demonstrated, so I’ve included it as a Marginal Power.

She’s been referred to as a witch, and a couple of her abilities have a mystical source. So I’ve given her some Occultist, although it hasn’t been fully displayed.

One of three such cities around the world (another being Babel, the City of Fire and Life), Bête Noire is said to shape the world, events taking place in it echoing on a global scale. Seeming to possess some form of sentience, the city decides who may enter and leave it, and prevents those it still finds useful from dying or aging, even speeding their recovery while they sleep.

In game terms, its special citizens might have Slowed Aging, up to 10 APs of Invulnerability and up to 06 APs of Regeneration (only while sleeping or unconscious, cannot regrow limbs and organs). The APs are attributed at the whim of Bête Noire and can (and do) change at any moment without warning.

On the other hand, most people with this Advantage (even if it ends up not giving them any benefit) cannot leave Bête Noire. The effects may vary, from an impenetrable invisible force wall, to being teleported back into one’s home, to getting lost and finding oneself in Bête Noire, etc.

Again, the city decides what happens – for instance Black Mariah can leave at will, but Asia Minor will just get teleported back to the cemetery. There is no correlation between how favoured the person is and how hard or easy it will be to leave Bête Noire. One general principle, though, seems to be that it gets harder to leave the longer one has been in Bête Noire.

The Citizen of Bête Noire Advantage also entails the ability to navigate the city without getting lost – newcomers will routinely have to contend with impossible topology, such as a straight street which ends at the same point it starts.

She had high level Connections to Shadow Boxer and Malachi, when they were alive. She also had 20 APs of Invulnerability while her brother held her death.

During the period published by DC, Mariah’s Cell Rot had the Limitation that its effect on formerly living matter is slowed by 10 APs of time. But this appears to have been lost over time.

Source of Character: Fallen Angel by Peter David, published by DC Comics and then IDW (covers up to #26 of the IDW series). 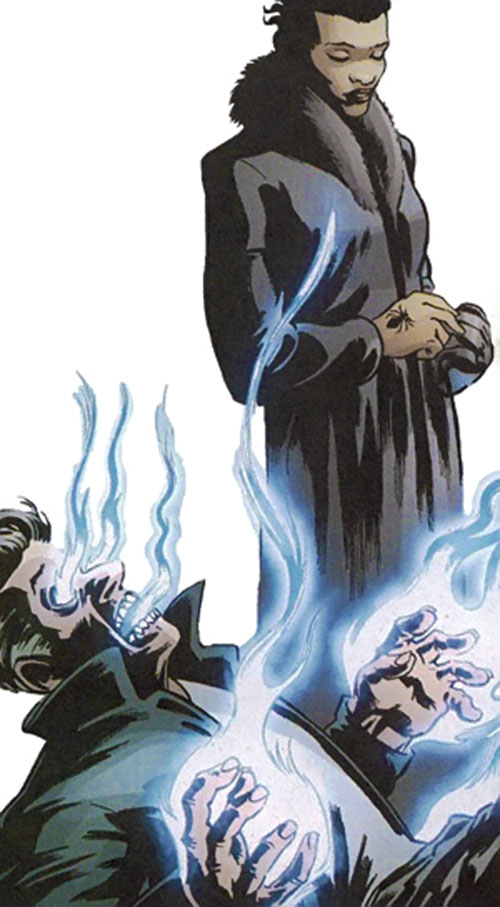