This character appeared in the earliest Luke Cage comic books, which Marvel started publishing in 1972. Surfing on the wave of blaxploitation cinema  (such as Shaft or Super Fly), these comics had a certain grindhouse character.

In particular, the attempts at emulating 1970s New York City African-American jive talking  could be… less than successful, as this profile pokes fun at.

The original, comic book version of Black Mariah is very different from the Mariah Dillard character played by Alfre Woodard in the 2016 Luke Cage Netflix show. The show does have an Easter egg about the comic book version, though.

Black Mariah is a huge woman. Despite her weight, she has no problem getting her hands dirty if need be and she has an opportunity for a sucker punch. Her sheer weight and meanness result in powerful punches, charges and even kicks.

Mariah has a good level of pain tolerance given her condition. She’s also much stronger than one would expect. For instance she could yank free a damaged car door and use it as a weapon – with one hand.

Black Mariah is one bad mama jama, ruling her criminal gang with an iron hand.

Black Mariah, a matron originally from the Lower East Side, came up with a unique racket that made for a steady flow of bread to her slide, dig ? She acquired a small fleet of quite official-looking ambulances. She then put word on the grapevine that there was money to be made telling Black Mariah when somebody croaked on ’em Manhattan streets.

The fake ambulance, driven by Black Mariah’s crew, would roll in before the police or actual EMTs could and grab the body, pretending to be legit.

Still operating quickly, they would loot the corpse of everything it carried. They would then use any keys — usually home and/or office — to loot those places, too. When they were done, they dumped the weighted bodies in one of the rivers.

Since few Manhattanites could describe their vehicle (except as “an ambulance” or the crew (except as “Black guys in white hospital coats”), the Man never managed to bring Mariah down.

In 1973, one Mr Jenks came to the Gem Theater in Times Square to meet with Luke Cage. However he was assaulted by a pair of thugs, who murdered him just as Cage rushed in. A bystander called Black Mariah’s set, and a fake ambulance carried off Mr. Jenks. 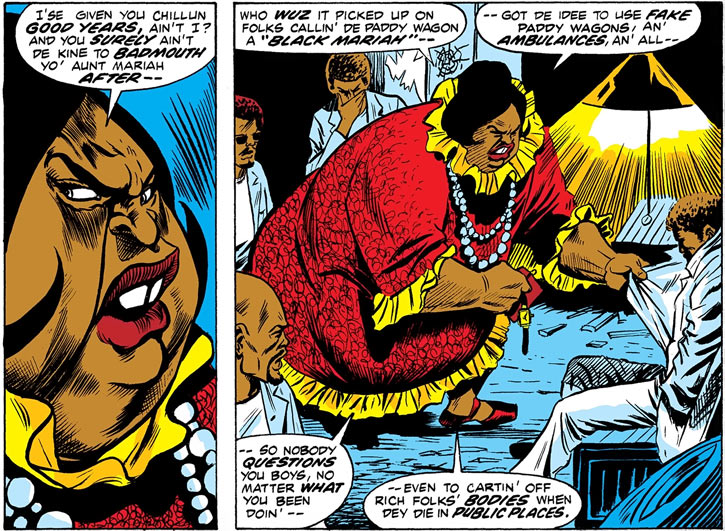 Cage, already on the edge after having to announce the death of her husband to Mrs. Jenks, immediately realised that somebody had stolen the corpse. But it was too late. He now had to announce Mrs. Jenks that her husband’s remains were missing.

Working a tip given by street informer Flea, Cage found Black Mariah’s hideout on 11th and 17th. He then easily disposed of her crew. He couldn’t bring himself to really bring her down, though, while she had no such hesitations.

She managed to flee to a nearly powerboat, but Cage jumped on it from a height of about ten meters and capsized it, leaving the police to capture the floating Mariah.

In 1982, Mariah appeared again after having been let out on parole. She had moved to Chinatown, and was now a player in the drugs trade. One of the batches of acid her pushers were selling, Acid Z, was bad and killed the customers. But she decided to continue selling it so she could pay for the next big shipment from Hong Kong.

She allied not only with Chinese-American gangsters, but also retained the Halwani melee specialist Scimitar as her head enforcer.

Iron Fist found them and defeated a quartet of Hakka-Chinese-speaking enforcers and then Scimitar. However he didn’t want to hit Mariah, who poisoned him with her knitting needles (!). She then punched him out and threw him from the roof, but Rand was caught by Cage.

Cage stopped the van of the fleeing Mariah and Scimitar, then took them both out in three punches.

She ain’t been seen again as of this writing, sho’ ’nuff.

Black Mariah reeks of cheap perfume. She’s a knitting enthusiast, and is often seen working on a new piece of clothing.

Her headquarters will come with a large sofa, since she has to spend much of her time sitting.

A heartless virago ruling everything with an iron fist (ah). She’s only concerned with profit, not caring in the least about the consequences of her criminal activities. Mariah always presents herself like an old lady, a modest businesswoman, and calls her crew “lil‘ (first name). Her original set included Little Carl, Little Al and Little Bob.

Black Mariah : “Pretty tough, ain’t ya ? Guess you be beatin’ me next, hah ?! Beatin’ up an ol‘ lady.”
Iron Fist : “No, I won’t harm you.”
Black Mariah : “Then you a fool !” (stabs iron Fist with poisoned needle, Iron Fist collapses)
Black Mariah : “Be poison on them needles I stuck you with… not enough to ice you, maybe. But more ’n enough to put you out.” (pause) “With a little help, that is !” (punches Iron Fist out)

Bonuses and Limitations:
Martial artist is Contingent on Growth ; since it is actually using her weight to its full advantage, she must be able to move freely (-2).