Black Mass’s bracers allow him to increase his own mass and size and manipulate gravitons. He can make objects and/or himself float weightlessly in the air or even fly. Or he can suspend the effects of gravity on a mass of earth or a building, resulting in its explosive disintegration under the strain (in DC Heroes RPG terms, Bomb).

Black Mass presumably can increase gravity to, say, pin opponents to the ground or collapse floors. He also seems able to shoot jet black beams of gravitational force that act as a concussive blast.

He can extrude and push ’waves’ of matter from the ground (even if that is a rigid metallic floor) using a gravity ripple. He often uses that to create an obstacle or crush and immobilise opponents.

At the Slab, the insane Black Mass demonstrated an ability to trigger a sort of black hole by banging his wristbands, Captain Mar-Vell style. This black hole could suck in the entire island where the Slab was located. But somehow, nothing was destroyed or killed and the island was just spit back into a blank dimension called a singularity space.

Black Mass could also create a gravity distortion in front of his chest. It would send incoming projectiles elsewhere, or maybe just collapse them and their momentum down through gravity (Force Shield).

After he was killed, Black Mass became a very potent energy negator. However, this effect was only manifest within a short distance of his body. He later demonstrated the ability to form a black hole and selectively suck energy into it. It took less than 30 seconds for him to drain Dr. Polaris, who was at that point tapping into the comic power of a Controller.

Early on Black Mass was then tangling with the Elongated Man in a way that suggested enhanced strength and durability. One the other hand, he has been consistently knocked out by blows to the head, even when delivered with human strength.

This entry lists all the things Black Mass was ever seen doing, which may convey the impression that he’s a powerhouse. It is thus important to note that :

Formerly a pencil-necked physics prodigy at MIT , Thibodeux was recruited by an alien menace called the Overmaster to join the Cadre. As a Cadre member, he fought the JLA in its Detroit version. See our Overmaster’s Cadre article for more.

Arrested in unrevealed circumstances, Black Mass was incarcerated. he was sent to the massive prison for superhuman and inhuman criminals, the Slab. There he was shackled with Promethium alloy restraints, which wasn’t quite necessary as he behaved as a model prisoner.

However, his good behaviour changed radically when the Joker triggered a prison riot. The madman exposed all other prisoners to a special gas making them Joker-like, violently insane and loyal toward him.

Black Mass gleefully agreed to warping the entire island, starting with himself, into a black hole. Thought the expected result was annihilation, the Slab remained intact but was marooned in an empty dimension.

Still under the effects of the Joker chemicals, Black Mass and other demented inmates tried to kill Slab staff persons Shilo Norman (formerly the second Mister Miracle) and Dina Bell. Thibodeux was accidentally killed when a stray bullet hit him in the head.

His corpse was later used to shift the Slab back to Earth. This was done by having Multi-Man reanimate it and letting Mister Mind take over the zombie Black Mass’s superhuman powers.

Black Mass’s corpse was then used by Norman as a black body  to absorb excess energy from Doctor Polaris. This prevented a global electromagnetic catastrophe.

Tibodeux’s corpse was thus left to absorb Dr. Polaris’ fantastic energies for months. That somehow healed and eventually resurrected Black Mass. When Polaris finally escaped, he magnetically made Black Mass capable of movement and restarted his brain. This granted Thibodeux a very small degree of speech (grunts, mostly) and initiative (like a very smart dog).

Polaris then assembled most of the Overmaster’s first Cadre, including Crowbar, Fastball and Nightfall. He also recruited a new Shrike called Starshrike, and a new Shatterfist.

Polaris’s Cadre conducted a series of thefts in high technology companies around California. But they were hounded by Skyrocket and some other members of the Power Company. Polaris used the stolen tech to assemble his master weapon — a satellite which could transmit a magnetic pulse over the entire planet.

The apocalypse gets cancelled

However the Cadre, minus the passive Black Mass, turned against their boss. They did not want to end civilisation, but rule it. They did not fare very well, since Polaris was tapping into the power of an alien Controller. This gave him Magneto (Max Eisenhardt)-level power.

The crafty Manhunter (Kirk DePaul) attempted to spur Black Mass into action against Dr. Polaris. He verbally provoked the shambling Thibodeux with elements from his past, hoping that something would stick.

Manhunter randomly discovered that Thibodeux remembered about Bobo, the kitten he had when he was in third grade. Exploiting this, DePaul told Thibodeux that Polaris wanted to kill Bobo.

Furious, the brain-damaged Black Mass took down Polaris single-handedly to defend his pet. He was then knocked out by Manhunter who hit him on the head with an iron bar. The addled Thibodeux never realised that Bobo had long since died of old age.

Even without exposure to Dr. Polaris’ magnetism, Black Mass seemed to continue recovering his mental faculties and agency – albeit at a very slow rate. He continued to associate with the Cadre villains.

For instance, he was present when Crowbar and Nightfall tried to flee the US but were stopped by Black Lightning. He also later accompanied Fastball II and Shatterfist II when they tried to rob a truck stop and were stopped by Flash (Wally West).

For some odd reason, Nightfall and Black Mass were also spotted in a crowd when many aliens living on Earth were summoned to Metropolis. Perhaps they were in Metropolis at that point and their alien bracers reacted to the summon due to that proximity.

Black Mass always has been a rather quiet person. The only appearances where he spoke more than a few words were a comedy appearance and while driven crazy by a Joker chemical. Since he was brain-damaged he’s even quieter and more passive. Thibodeux never seemed particularly aggressive, though he was loyal to the Overmaster.

Black Mass’s recovery from death is very slow – it took over a decade. Early on he was slow, clumsy, and could only grunt and follow simple orders.

Some random parts of his brain were more intact than the others. When those were simulated he could form rough sentences such as “Nooooo ! Nodd Bobo ! Yuu won’d hurdd Bobo ! I won’dd ledd yuu!” or “He falled down. Bobo safe now ?”.

By the late 2000s Thibodeux seemed mostly recovered, though he still doesn’t speak much – making an assessment difficult. He seems to be on the level of a slow, but not actually mentally handicapped, person with an IQ in the 70s or 80s. It is possible that he’s still rebuilding his ante-mortem level of intelligence.

Advantages:
Alter Ego (as Thibodeux, he has no Powers and all of his Physical Attributes are 02. He seems to have lost this when the wristbands fused to his body), Expertise (Physics).

After he suffered serious brain damage, all of Black Mass’s Mental and Mystical Attributes permanently became 01s. He lost all of his Skills and Advantages as well as his Motivation, Occupation and Wealth. His DEX looks like a 02 or so, making his Initiative a 004.

He generally couldn’t access his Hero Points, but burned them all when he was persuaded that he was defending his kitten Bobo.

Black Mass has since recovered a bit. All his Mental and Mystical Attributes seem to be about 02 and he can access his HPs (though he’s down to about ten of those). Black Mass seems to find it difficult to use his Powers, though, and usually prefers to attack hand-to-hand.

Some panels imply that he now has Growth: 05, though the first two APs are still Always On and Already Factored In. Though one should always be wary about how sizes are drawn in comic books, this seems to make sense given the previously demonstrated flexibility of his abilities, his current tactics and the brain damage he has suffered from.

Gravity powers that he used to use before the brain damage ● 103 points ● Descriptor: Overmaster enhancements, gravity
– Gravity nullification — Perception Ranged Move Object 11, Limited to suspending gravity (usually to make objects/persons float up, or raise a portion of the ground as an attack or obstacle).
– Gravity nullification to make part of the ground rise and entrap people — Snare 8.
– Personal gravity nullification — Flight 5.
– Gravity amplification — Ranged Affliction 11 (Alt. resistance (Strength), hindered & vulnerable, immobile & prone, incapacitated & asleep (well, unconscious from the strain)).
– Make things explode — Burst-area Explosive Damage 9, Limited 2 (only against things anchored to the ground, like buildings), Quirk (this attack is easy to dodge since the explosion is slow to occur – -4 to the attack roll unless the person cannot dodge).

The PLs and point totals are based on his full abilities (hence the huge points total). This is a polite fiction, as his medical condition prevents him from using anything like his full powers. Adjust based on the range of abilities and the level of initiative you intent Black Mass to show during the encounter.

Black Mass will usually just use his extra Growth so his Damage is 11 (Attack/Effect becomes PL 8 ), and will be unable to access his gravitic and seldom-used abilities (making his point total collapse by about 200 points, back to PL6 or 7). 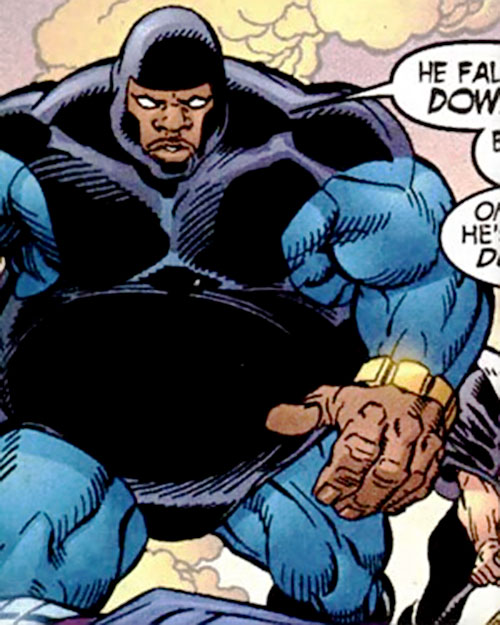 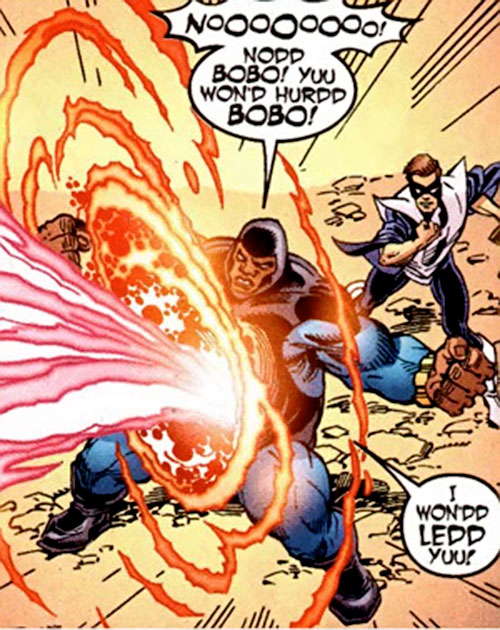 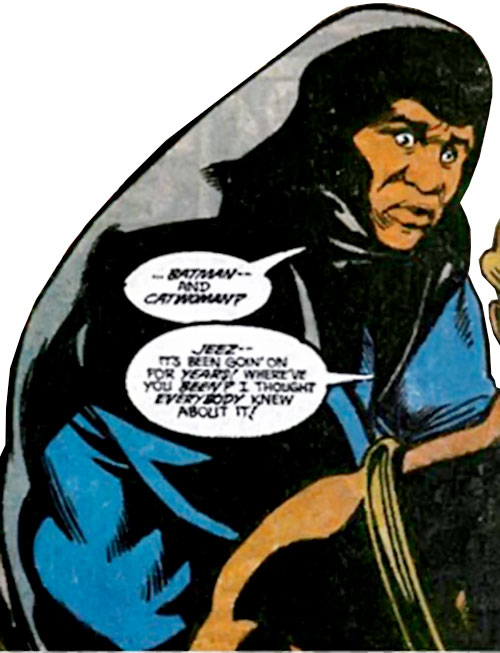 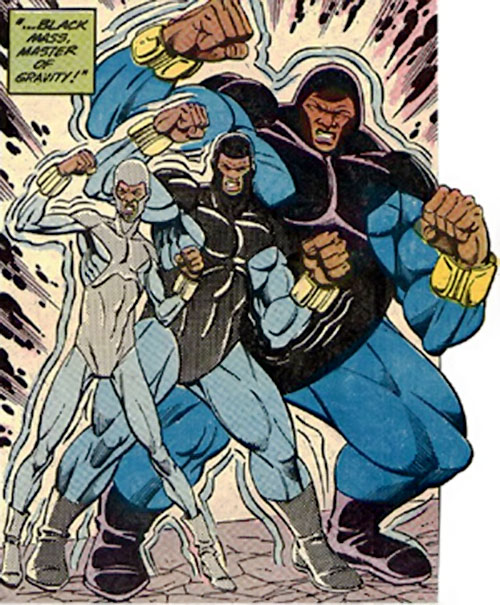 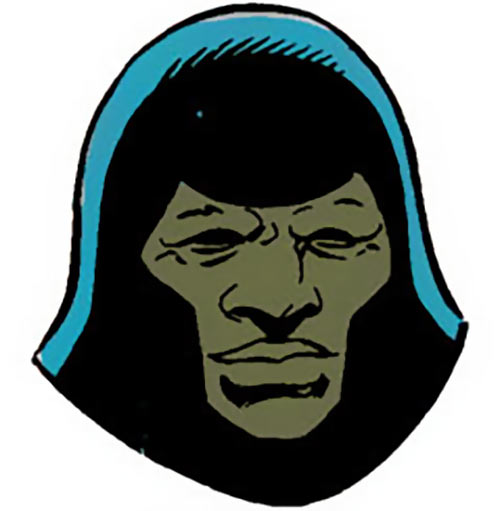 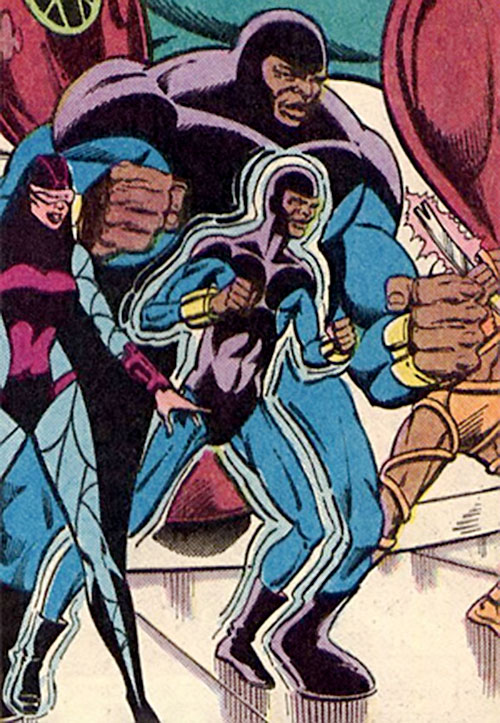