The Black Paladin is a skilled, vicious knight. He is armed with several magical weapons.

His favorite is his mace, Crusher of Hope. For those with proper martial training, it inflicts blows powerful enough to shatter castle walls. If “thrown”, it is capable of extreme flight and will return swiftly to his hand.

He also carries a sword, Eater of Shadows. Deadly enough in his hands, if the victim sheds any blood, the sword will consume their shadow. A person without a shadow suffers extraordinary misfortune (and looks slightly odd as well). The only way to get the victim’s shadow back is to perform a magic ritual. The sword itself is used to carve arcane symbols (engraved on its ricasso) on the victim’s chest.

Eater of Shadows can also project a potent Shadow Blast. The shadows it has stolen powers this attack to destroy the Black Paladin’s foes.

Since he carries his enchanted shield in his left hand, he can only wield one of these fearsome weapons at a time.

On very rare occasions where the Black Paladin uses a steed (a bat-winged horse, dragon, or similar demonic creature), he can teleport in and then utilize the Lance of Unvanquished Pain. It inflicts intense, paralyzing agony if it draws so much as a drop of blood.

His well-crafted suit of black plate armor, the Armor of Arcane Pathways, also carries a potent enchantment. It allows him to move to a nearby place without crossing the space in between. He often uses this ability in combat, teleporting behind a foe to obtain a blindside bonus. Or he might shift from enemy to enemy to keep any one of them from mounting a sustained attack against him.

The Black Paladin also has a few magical abilities of his own, spells learned from his lover, the witch Chantal. Aside from quick premonitions that warn him of danger, he can also conjure a thick fog to blind his foes, and then use his “Eye of Souls” ability to keep track of where they are so he can attack them without difficulty.

(In DC Heroes RPG terms, they should be rituals, but he never fails at them, so they are just listed as Powers).

De Morphant also possesses several skills needed for his role as John Black, archaeology professor. His knowledge of modern civilization and history is fairly complete, though he may slip on occasion.

Long centuries ago, in the time of good King Arthur, one of the greatest enemies of Camelot and the Knights of the Round Table was the House of de Morphant. This family of French knights was so black-hearted and cruel that people said “Quand il pleut, le monde pleure pour les méfaits de Morphant” (“When it rains, the world weeps for the De Morphant’s misdeeds”).

The most wicked of all the scions of de Morphant was Giles. He was known far and wide as the Black Paladin, Knight of the Crow, for his dark armor and even darker soul. Many of Arthur’s best and strongest came against the Black Paladin, only to have their bloody heads returned to the king.

With his deadly mace, his terrible sword, and enchanted suit of armor that allowed him to vanish and reappear somewhere else, the Black Paladin was virtually unstoppable.

King Arthur received news that Giles de Morphant’s dark cult was marching on a French abbey, intent to sack, rape,&pillage. He sent his greatest knight, Sir Lancelot at the head of a column of noble knights to put an end to the Black Paladin once and for all. The clash between Lancelot & de Morphant was fierce. Mighty blows were given and received by both knights.

After a day of fighting, the two parted, beaten, exhausted and bloody. But the Black Paladin had the better of the battle. His men routed Lancelot’s knights. Though badly injured himself, de Morphant dealt Lancelot so great a wound that surely his foe was certain to die. Exultant despite his pain, he left his adversary, and proceeded to the abbey.

Finding that Lancelot has delayed him enough for the nuns to escape, he flew into a rage. De Morphant ordered the building put to the torch.

The terrified nuns fled to Lancelot’s encampment. Their prayers, and the tender ministrations of one Elaine, healed Lancelot’s wound. By the time the Black Paladin and his army returned, Lancelot was ready. This time, de Morphant’s power and black magic did not avail him. Lancelot triumphed, leaving the Black Paladin face down in the trod muck of the battlefield.

After the battle had passed, his lover, the powerful witch Chantal, came to him. Giles de Morphant would not die that fateful day. Through sheer evil and malice, he clung to life. Yet, while his black soul lingered, his body was too far gone. His wounds were too dire for even her magicks to bring him well and conscious.

She worked up a spell to slowly heal and preserve him, readying him, until “he who is as your brother shalt awaken thee.” She then placed him in his secret sepulchre, long prepared against just such a day. In anguish, despairing over her failure to return him to her as Elaine’s faith had Lancelot, Chantal took her own life.

Fast forward to but a near decade from the present. John Black, an American archaeology professor from Marquette University , was backpacking across France. There he discovered something in a dark, tiny patch of forest…a tomb!

Had he bothered to speak to the local people, he would have learned he was in La Forêet du Chevalier Noir, the Forest of the Black Knight. They shunned it as cursed ground and a place of great evil.

Eager to know more about his find, John sought the coffin, apparently untouched for centuries. He struggled with the stone lid. To the man’s surprise, inside was what appeared to be himself as a perfectly preserved corpse! Reading aloud, the professor tried to translate the inscription on the inside of coffin. With a start, the corpse’s eyes opened!

Before Black could react, Giles de Morphant’s powerful right hand was about his throat. Somehow the enchantment that had caused the Black Paladin to sleep for centuries had also prepared him for his new life in this new world. He could speak modern English fluently, and was aware of many of the changes that had taken place in society.

Time it waits for no man / My future is revealed

The next several hours were a painful haze for the archaeologist, as the Black Paladin tortured him mercilessly. After having learned enough to impersonate the man, de Morphant callously slew John Black. He walked out into this bright, new world.

There were new knights to battle, knights armored in gaudy, skin-tight cloth, with powers that exceeded even his departed lover’s wizardry. These knights would soon learn that the Black Paladin was the deadliest of foes…

The Black Paladin wears finely-crafted black plate armor and matching helm, with a blood-red surcoat and cape. Eater of Shadows is usually in a scabbard at his left hip. In his right hand he typically carries Crusher of Hope, and in his left has a shield with his device, a crow sinister, emblazoned upon it.

Giles de Morphant (or “John Black”, whose identity he has usurped) appears as a tall, well-muscled, dark-haired man in his mid-30s. He has dark eyes and a short, well-trimmed black beard. Even in his civilian identity, he has a certain malevolent air that is off-putting to many.

The Black Paladin is fiendishness personified. No deed is too evil for him, no sin too black. He has no respect for human life, the beauty of women, the piety of holy men, or anything else other than himself. He particularly enjoys tormenting his foes, whether it be with the rack and pincers, or the simple knowledge of their own defeat and death at his hands.

Gloating comes naturally to him. He rarely hesitates to explain his schemes to his soon-to-be-dead foes.

Black Paladin is a cold and implacable foe. With military precision, he spies out an enemy’s ways and strengths, then strikes them at their moment of greatest vulnerability. Another favorite tactic is attacking in a public place, where there are plenty of innocents to menace or use as hostages.

Remembering the Christian purity of Arthur’s knights, the Black Paladin reserves a seething hatred for Christianity and anyone associated with it. Many of his crimes have involved the desecration of churches, the violation of nuns, and the destruction and looting of Christian charities and institutions.

The Black Paladin’s manner still clings to the pretense of nobility and honor, though far removed of any mercy, honesty, or faithfulness. That said, he does not speak with “thees” and “thous” or any other Middle Age clichés, but with a cultured vocabulary and very formal syntax. He speaks courteously (even if his words drip with malice).

“I shall stain my fingers with your heart’s blood, and the blood of your heirs. The lament of your friends shall be my poetry, your funeral elegy shall be joyful music to me. Stand and face your death !”

“You who stand against me shall fall deeper than the pits of Hell, for not even Lancelot can come against the Black Paladin and escape untouched. The sight of your life’s-blood spilling upon the ground shall be sweet to me, sweeter than the singing of nightingales”

He can be dropped in pretty much as is. The list of characters he could/would have interacted with is astounding (Shining Knight, etc.). Or, as a twist, he could have been but a facet in the life of Vandal Savage.

Placing him in a book set in the mature Vertigo line would allow for his crimes displayed to be even more wicked and vile.

Bonuses and Limitations:
Recall limited to world history and cultures only.

He’s one for which I played around with the stats. A more literal translation of the published stats just seemed too low for the badass that they described.

I also invented abilities for a weapon that was only given a passing mention. 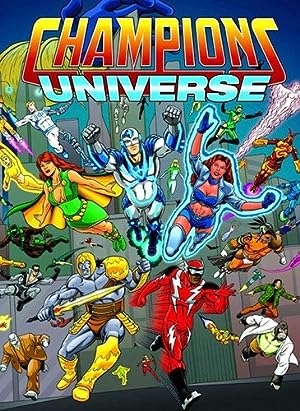