“Black racer” usually refers to a pair of Coluber constrictor North American snake species. These are large-ish hunters, though they aren’t as fast as the name suggests. Neither are they constrictors. It’s all marketing by Big Snake, mate.

Her profile is meant to be read after the following two articles :

Black Racer can run, dodge, strike, etc. at superhuman speed. She sprints about as fast as a sports motorbike.

Her super-speed flurries of blows hit fairly hard. But Captain America (Steve Rogers) could withstand them without *that* much trouble. She also often clotheslines her enemies.

She’s not bad at using her speed tactically, and often does the Society’s recon/scout work.

It is common for competent leaders to have her search for a target, security cameras, opponents to report on, etc.. After all, she can do that in about one-hundredth the time it would take a normal person.

Black Racer is vulnerable to… tickling. This might be because of her super-accelerated metabolism.

She generally lacks durability by super-hero standards. But she seems strong for her size, and can run for hours and hours. 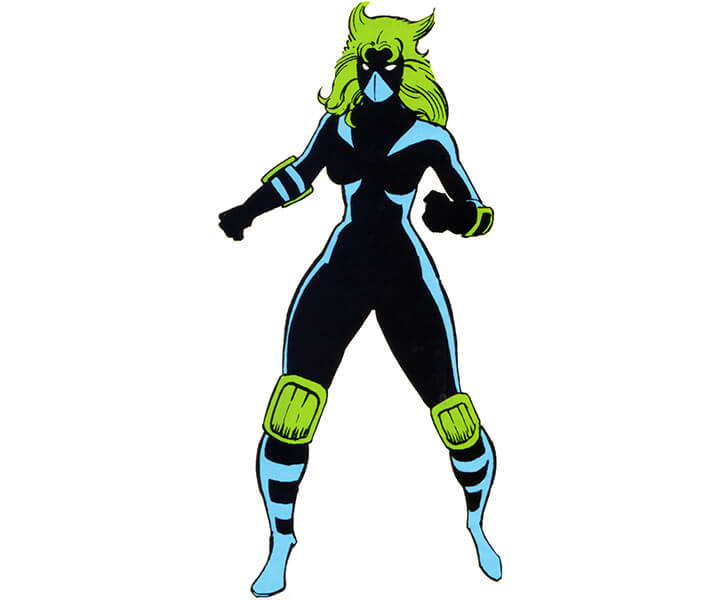 There’s an odd incident where Black Racer is selected to participate in a super-running competition. Yet she’s markedly slower than the others.

She does forfeit… after 49,000 kilometers (30.4 thousand miles). That’s markedly more than Earth’s circumference. The conditions for the race were impossibly perfect, but that’s still an eyebrow-raising endurance feat.

Our No-Prize HypothesisA made-up explanation to plug a plot hole is that her selection, and her endurance performance, stem from her potential for a markedly higher level of superspeed.

This story also had a little Flash (Barry Allen) joke. So heh, perhaps Black Racer can tap the Speed Force. But only a tiny amount, because she’s in the wrong universe.

One scene implies that her costume is reinforced against abrasion. For instance, if she trips and skids for a long distance over asphalt. That includes visible knees and elbows protectors.

This is presumably similar to moto equipment .

In 2016 she wielded a long, slim dagger. It might have been poisoned. But having a weapon might not be part of her normal m.o.. In this specific story it seems to have been a theatre dagger to deceive Captain America (Sam Wilson). 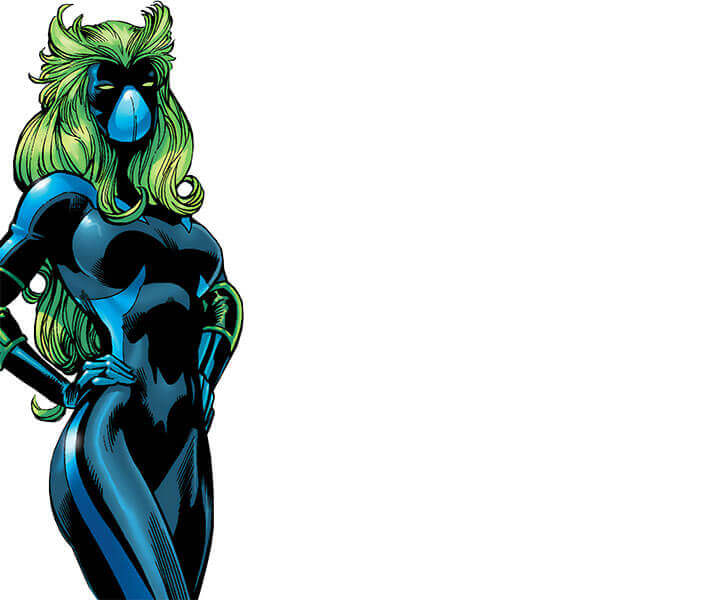 As you’ve read in the team profiles, Black Racer was with the Serpent Squad that infiltrated the Serpent Society at the Viper (Ophelia Sarkissian)’s behest.

She then joined the Society after the coup’s failure.

During the coup, Black Racer was sent after wounded Society leader Sidewinder (Seth Voelker). But novice adventurer Vagabond (Priscilla Lyons) unexpectedly took her down… through tickling.

During the Llyra/Ghaur contract, Black Racer was dazzled by Dazzler (actually Rachel Leighton in Alison Blaire’s body) then psionically taken out by Psylocke (Elizabeth Braddock).

In 1990, Elder of the Universe the Runner selected her for a special space race. But she never had a chance. Other competitors included much faster runners such as Speed Demon, Makkari, Quicksilver, the second Whizzer, etc..

During the 2010s, she joined Serpent Solutions.

Later on, she was on several smaller Serpent crews, and among the animal-themed villains hunted by the clients of Arcade and Kraven (Sergei Kravinoff).

Black Racer isn’t usually drawn as short as her official height. For instance, early on she’s almost as tall as Fer-de-Lance.

But heh, let’s assume that it’s her costume’s fright wig that makes her look a bit taller. And maybe she has reinforced, thicker soles to cope with her speed.

Ms. Saddiqi is also one of the Serpents who’s had several, completely different physical appearances out of costume.

Our No-Prize Hypothesis is that they use holographic image inducers to do that. So we’ll also assume that neither of the faces we saw is the “true” one, as there’s no way to tell.

Impatient, aggressive, even vicious. She executes on orders in a thorough, disciplined way.

She seems to be an excellent follower, but with a so-so level of initiative.

She doesn’t talk much, either – except may to complain about other people being slow. 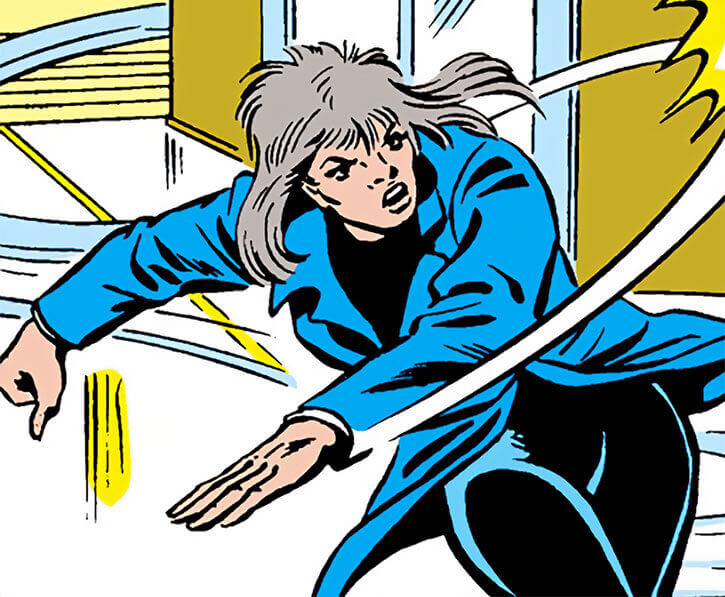 “You didn’t expect me to wait around for you, did you ?”

“Child’s play for one as fast as myself.”

Martial Artist is Contingent Upon Superspeed.

MIA toward Impatience, SPR (being tickled will Stun her for that Phase). 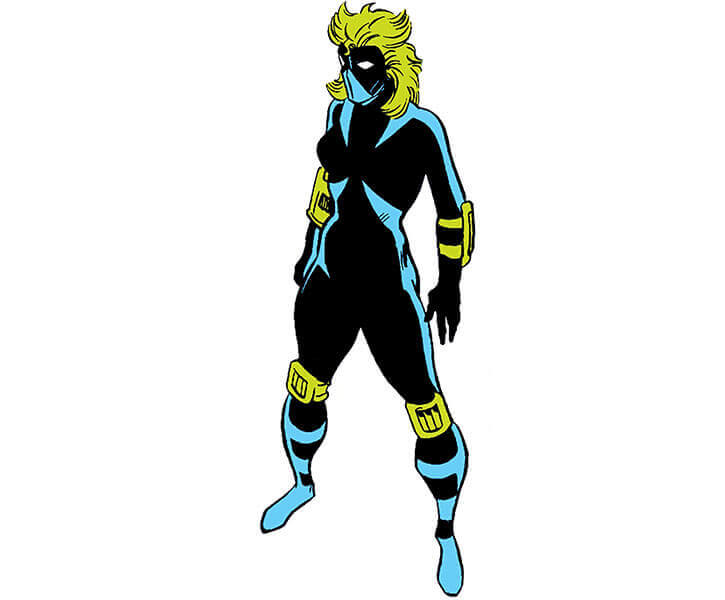 The Superspeed + Martial Artist is a way to allow for two substitutions per Phase — one at 7 APs, one at 5 APs.

Only having the Superspeed sub can produce odd results, especially for a character like Black Racer whose Physical Attributes are unimpressive. The “one sub and a half” approach with a Powered Martial Artist lubricates this technical aspect.

It also helps bump her Initiative up a little bit. As being under 20 felt low for this Superspeed character – even if she’s a low-powered one.

These little power-ups are a result of movement speed in DC Heroes progressing super-quickly. Black Racer “only” has 7 APs, but that may mean a speed as high as 200mph (320km/h). So she moves really fast in the comics, but that doesn’t mean a big number in DCH.

The Superspeed APs seem about right for the EVs she deployed, though. Good, good.

She might have other Powers derived from her Superspeed, such as Jumping.

Much of her mediocre-by-supers-standard durability lies in her low Hero Points. She never seemed to spend significant amounts.