Black Samson’s main power is his superhuman strength. He also possesses great resilience to physical injury, increased resilience to pain and fatigue and extraordinary recuperative abilities. His body is resistant to penetration wounds of any kind up to a high caliber bullet.

His legs are sufficiently strong enough to enable him to leap approximately 150 ft straight up into the air. His jumps can also cover a distance of at least 300 ft.

The hero known as Black Samson was a longstanding member of the original Guardians of the Globe. He was a valuable member of the team through many missions, including the team’s first encounter with Omni-man. However, his membership was revoked when his powers were negated.

Emotionally crushed by the loss of both his powers and his affiliation with the Guardians, Samson began seeking a way to re-enter the superhero fold. He contracted superhero tailor extraordinaire Art to build him an exoskeleton  battle armor suit. However, prior to final testing an unknown assailant attacked Art in his shop and stole the suit.

Soon after the theft, the Guardians were killed in their secret base, leaving Samson as the prime suspect.

Samson was cleared, when the ensuing investigation showed that he had not left his mansion for weeks. In fact, Samson was not even aware that the Guardians’ had been murdered. When Samson attended the memorial service for his fallen comrades, the true identity of the suit’s thief was revealed to be Sanford – Samson’s butler.

Sanford was seeking revenge for what the Guardians had done to Samson, and attacked the funeral’s attendees. Sanford was quickly defeated and sent to prison. 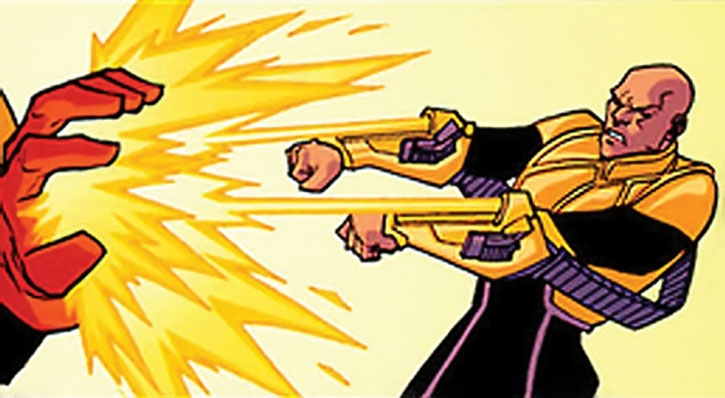 Several months later, the New Guardians were called in to reinforce Invincible in a battle with the henchmen of the crimelord Machine Head. The Guardians (and Invincible for that matter) were well on their way to victory until the being known as Battle Beast entered the fray.

Battle Beast rendered Invincible unconscious. Furthermore, the heroes Black Samson and Bulletproof were sent to the hospital. Samson entered a deep coma. So deep that his doctors were unsure if he would ever be healthy or even awaken again.

The sleeper must awaken

Months passed, and Samson remained comatose. It wasn’t until the villain Omnipotus “The World Shaper” attacked Earth, that Samson awakened from his coma. Omnipotus had all but defeated the world’s heroes. And with Invincible off world, no one was capable of stopping him. 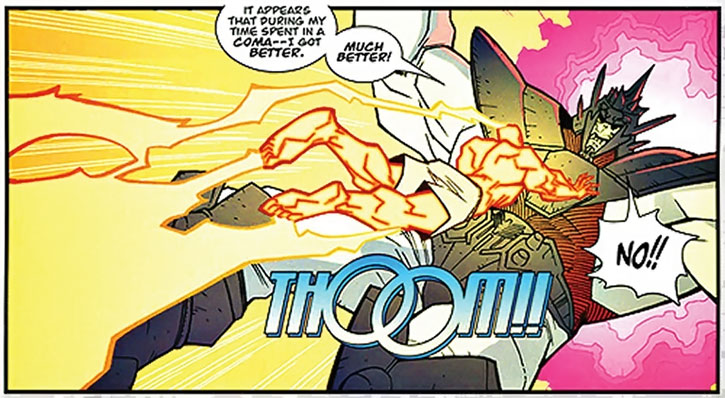 At that moment, Samson was teleported from his hospital bed to the battle ground. He was crackling with new found strength. His powers had not only returned, they had increased during his coma. With a single mighty tackle, Samson forced Omnipotus through an open portal and back to his own universe. This trapped the World Shaper in his own dimension.

With his superhuman abilities back to normal (the brief spike in strength faded after his encounter with Omnipotus), Black Samson triumphantly returned to the Guardians of the Globe. He continues to this day to help the team hone their skills and teamwork against any foe they may face.

Samson is a fairly attractive, big bald Black man. He is built like a professional wrestler with a massive upper torso, small waist and massively muscled legs.

His costume is a gray and purple spandex suit that covers his entire body from head to toe. The sleeves of his suit are skin tight from his shoulders to his elbow, but loosen and flare as they reach his wrists. Black Sampson doesn’t bother to wear a mask, and has no concerns over preserving his true identity.

The yellow and black costume is the powersuit Samson wore while his powers were lost. The purple and black homage to Doc Samson is Black Samson’s original outfit.

Samson is a consumate hero. Nothing else gives his life meaning.

When his powers were neutralized, he went so far as to get a power suit made and risked his life to still fight the good fight. When he was removed from the Guardians, he had a near breakdown, as the only thing that gave his life validation was taken away from him.

“Two days ? Safety testing ? You don’t understand what I’m going through here ! I’m nothing without my powers ! My life has gone to HELL since I was negated. Do you realize the Guardians of the Globe revoked my membership ? I’m completely useless to them… I need the suit… I’ve got to get back in the game… I’ve got to take back my life.”

“Excuse me— I woke up to coverage of this ordeal on the news. You mind if I butt in ? It seems I’ve been out of commission for a while. I’d like to get back into the swing of things.”

“It appears that during my time spent in a coma — I got better. Much better !”

He’s such a minor character, he can be used as is.

Bonuses and Limitations:
Jumping has the Catfall bonus.

Samson experienced a brief spike in his power levels after awakening from a deep coma he suffered from for a period of months. Like a Super-Saiyajin, the increased energy coursing throughout his body manifested itself as a visible glow of light and arcs of electrical energy that appeared to emanate from within Samson’s body.

After one brief surge though, his strength returned to normal. During that battle, Samson evidenced STR 17 and BODY 16. 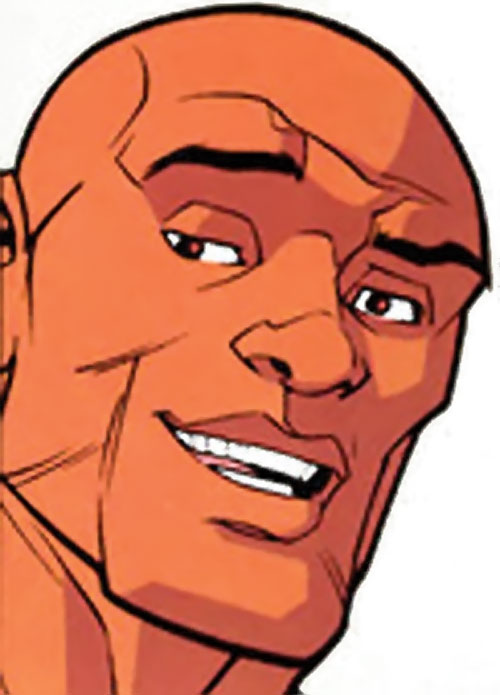 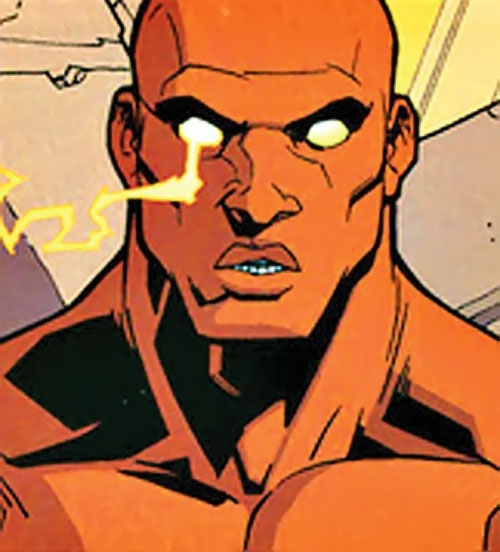 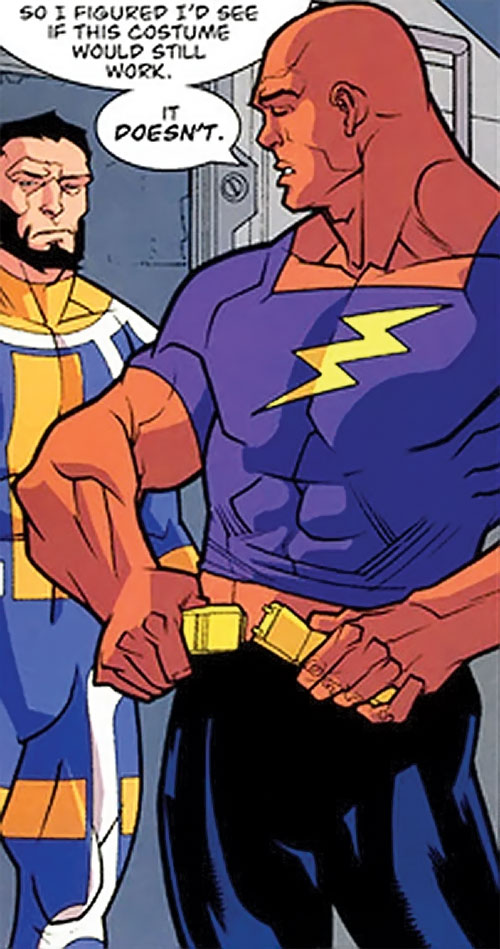