The Black Spider has trained himself to his utmost potential for his war against drugs. While his training lacks the breadth of the Batman’s, the Spider is extremely fast, strong and tough. He’s competent at every aspect of the specific urban war he’s waging.

The Black Spider has absolutely no compulsion against guns. He uses an arsenal of hi-powered ordnance. Most of his kills are done using sniper or commando tactics.

After he’s psychologically broken, the Spider becomes much less formidable. Though he was still dangerous, his is a severe case of super-villain decay .

Eric Needham was but one of the young Black men who became drug addicts in Gotham’s projects. He eventually had to turn to crime to pay for his dope. For years Needham burglarized flats to grab video recorders and big TVs, or mugged passers-by for their purses or watches.

He went as far as armed robbery. Once, he held up a liquor store to steal the cash. The hold-up went wrong, and Eric accidentally shot a man. He later learned that this person was his father.

Shocked by this turn of events, Needham gathered enough willpower to go cold turkey . Now sober, he blamed everything that happened in his life on the drugs and those who were pushing them. Inspired by various movies and the ominous shadow of Batman, Eric trained hard so he could wage a literal war against drugs.

A mysterious benefactor then came in and supplied him with gear, a costume, and access to elite training.

Now heavily armed and almost a match for Batman in a fight, Needham christened himself the Black Spider. He started his onslaught on drug dealers. As the deaths started, the masked manhunter zeroed in on the Spider. Black Spider was believed killed during that first battle, but survived and returned for another killing spree.

During this new confrontation with the Batman, Eric learned that his mysterious benefactor was actually a mob boss named Hannibal Hardwicke. The mobster had been using the Spider’s anger and skill to slaughter his competitors and thus expand his criminal empire.

The shadow of a spider

Needham was psychologically broken by the realisation that he was fighting for the top horse supplier in Gotham. When he got out of prison he was aimless and weak.

The Black Spider even joined a gathering of Batman foes at one point. He was defeated by Catwoman. Catwoman had refused to work along with the other criminals, and was forcefully defending the Batman against the crook’s onslaughts.

By that point, Needham seemed to have fully become a criminal.

When Ra’s al Ghul later organised a breakout from Arkham Asylum and a Batman hunt, the Black Spider was among the hunters. However he was easily defeated by Batman and Robin – despite teaming up with Poison Ivy, the Scarecrow and Catman.

Death of a slayer

Needham then retired from the streets for several years. He learned that the son of fellow a junkie named Linda Morrel was also his, and started seeing her again. However, Linda proved unable to kick the habit, which led to serious tensions in the family. Linda’s relapse into heroin greatly angered the guilt-ridden, depressive Eric.

He eventually became the Spider again, but the underworld’s counterstrike was swift. Days after the Black Spider hit the streets again, they gave Linda 100% pure heroin, with fatal results. They also spiked his son’s cereals with the same product, fatally poisoning him.

After writing a long suicide note to Batman, the Black Spider stormed the main lab of the man who had Linda and Michael killed. The assault failed, but the diminished Black Spider didn’t care. He had hidden a large quantity of plastique in his costume and detonated himself at the drug lord’s feet. The entire lab and all within were destroyed.

A few years later, a two-bit thug named Johnny LaMonica joined Black Mask’s crew as the second Black Spider. He doesn’t have any connection whatsoever with Eric Needham, and just stole the name.

Purple costume with dull orange boots, gloves and mask, and a dull orange spider motif on the chest and above the gloves. The mask has black shadows, and no facial features except for white eyes.

While he has an exceptional physical potential and great discipline, the Black Spider simply does not have Batman’s morality. He doesn’t hesitate to kill. His calling is to terminate the scum that preys on defenceless citizens. Having personally experienced the US prison system, he knows that it is not a solution.

He’s a man of action : fast, skilled, resourceful, efficient. However, he tend to jump into situations and think later, and planning seems to bore him. Thus, while he’s very good, he can be beat by good planning.

The Black Spider seems marginally unstable psychologically, ever since her learned he had killed his own father. He has slight delusions that he is justice incarnate, and that his acts are justified by a higher cause. He completely de-humanize his victims, seeing them as sub-human aberrations. Originally, he felt no remorse over slaughtering them : “they had it coming”.

Eric Needham may have suspected that a drug lord was behind his gear and training – but if so he was in denial. Getting proof of it destroyed him.

After this revelation, Needham degenerated into a simple thug. His hatred of pushers somehow became a hatred of the Batman. Black Spider would fully collaborate with such heinous criminals as Killer Croc and the Joker if that meant having a go at Batman.

He was, however, much less formidable than before. He also became conflicted and guilt-ridden as to all the violent acts he had committed, further blunting his edge.

“Sorry Batman, but Hardwicke can’t make it ! He’s got a prior engagement… in Hell !”

“I’m sorry, detective. But when you get in a spider’s way, you’re bound to get stung.”

“Hate, Batman. That’s what sustained me. Hate for the pushers who made me a junkie and killed my dreams.”

“Anything that eases the pain is addictive. We’re all addicts, trying to fill that gaping hole in the centre of ourselves.”

Once psychologically broken, his CIH of pushers became a SIH of the Batman. However, he only has half his normal HPs (020) and all his AVs (DEX, INT, AUR, Skills…) are lowered by 02. His Initiative also dropped to 018. He had lost much of his tactical acumen and would easily make stupid mistakes.

Furthermore, after one of his arrests, he acquired the Public Identity Drawback. Although he didn’t realise it until too late, much of the underworld knew that he was Eric Needham. His Rage also shifted down to Minor, as he started feeling guilty over all the carnage he had caused, which clashed with his Christian childhood values.

These penalties lasted until his death.

This entry assumes that Batman had a DEX of 10 during his encounters with Black Spider. 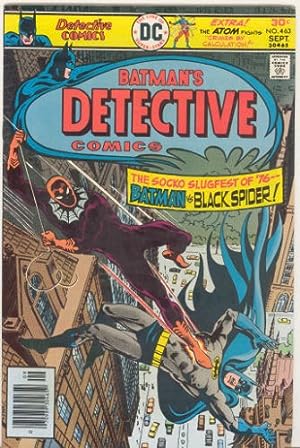