Even in his now-reduced state Black Tarantula is borderline superhumanly strong and agile. He’s also a trained fighter capable of taking out a Hand hit squad with little trouble.

While he can be hurt, he heals at an accelerated rate, and can share this healing with others.

Ending up in U.S. custody, Carlos was subjected to a treatment that greatly reduced his powers, and incarcerated in Rykers prison. He became leader of the South American gang in the prison. LaMuerto was present when Mat Murdock (Daredevil), Kingpin, and Hammerhead were all there.

When Bullseye and the Punisher were added to the mix, the place soon became explosive.

In the ensuing riot Carlos found himself faced with a no longer restrained Bullseye. Unwilling to run from him as Hammerhead did, Carlos charged the psychopath. He was seriously injured, but his powers kept him alive.

Released early for good behaviour, and due to overcrowding, Carlos decided to turn his life around. Turning his back on his former life and empire, he moved into one of New York’s poorer inner city districts.

Returning to his costumed identity, he became a vigilante. The Black Tarantula cleaned up his streets and gave seized money to charitable causes. Taking labouring jobs, he lived in a dilapidated apartment with none of the opulence of his crime lord days.

Initially open about his actions, this changed after his cousin Luis led some of his former organisation’s men to New York. Luis wanted to take back the powers still in Carlos’ blood. They used a woman and child who appeared at a distance similar to Marina and Fabian to lure him in.

The pair were killed in the confrontation. Carlos — burning alive from the explosion — killed Luis and his men. Knowing more could come after him, he started operating more quietly.

After being attacked in his apartment by Hand assassins, Carlos killed them and went to Murdock for help. At Murdock’s place he found Master Izo, who knocked him out and tied him up until Murdock returned. Carlos learnt he wasn’t the only one attacked, and that the Hand had plans for the city. 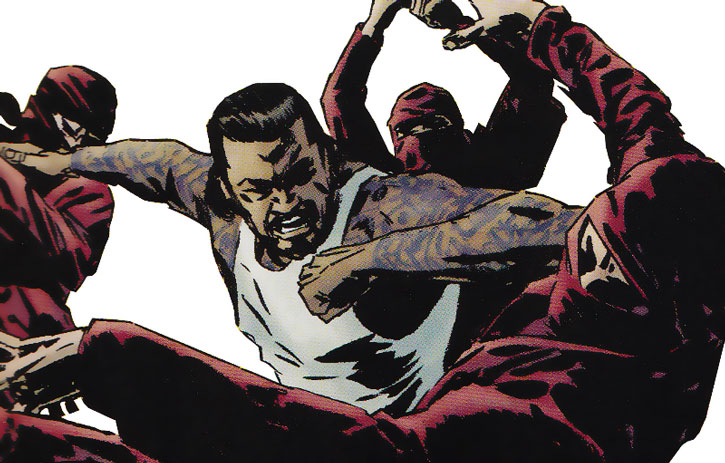 Carlos and Master Izo found a Hand base and learnt their targets. Master Izo told Carlos the Hand intended to kill a number of the targets and revive them as their agents. He believed Carlos’ healing factor would allow him to overcome the programming, and convinced him to infiltrate the group.

Going to the aid of a target, White Tiger (Angela del Toro), Carlos knew she’d already been turned. He leapt in against the Hand assassins fighting her, and she stabbed him in the back and killed him.

He was revived by the Hand. He and the White Tiger became part of Lady Bullseye’s campaign against Daredevil.

When the time came, Carlos, his powers having overcome the programming, turned on the Hand. He shared his powers with White Tiger to cure her of her programming, before confronting the Hand leaders.

The Hand’s actions had all been in aid of persuading Murdock to become their new leader. He was unwilling until Kingpin arrived to demand the position, at which point Murdock agreed.

Carlos became increasing concerned about both the situation and Murdock’s stability. This was especially true once the Shadowland castle was established in Hell’s Kitchen, and the Hand seized control of the district from the police.

Carlos remained loyal to Daredevil, unaware that the Hand’s real plan was to corrupt Murdock into the avatar of their lord, the Beast. The plan was nearing completion when Murdock’s costumed friends tried to intervene. It turned into a war on the streets.

When Carlos let his doubts show too much, he learned White Tiger hadn’t remained cured of the Hand’s influence. She stabbed him in the back, and let him fall off a building.

Gruff and tough, Carlos currently gives the impression of a working class superhero. He tries to make the streets safer for normal people. He actually seemed out of place within the organisation of the Hand – not simply because of what they were.

He carries a lot of rage bottled up, which he lets out in combat. As a result he can be brutal in a fight, and has little compunction killing certain types.

The reason for his change in temperament and goals is unclear. The confrontation with Marina made him consider how he’d been forced into the role by his father, and he may be trying to break away from that and find himself.

It’s also possible the treatment used to suppress his powers may be partly responsible, having altered his brain chemistry and caused a personality shift.

“You fools just cost me a cover I.D. and a security deposit. So let’s do this.” 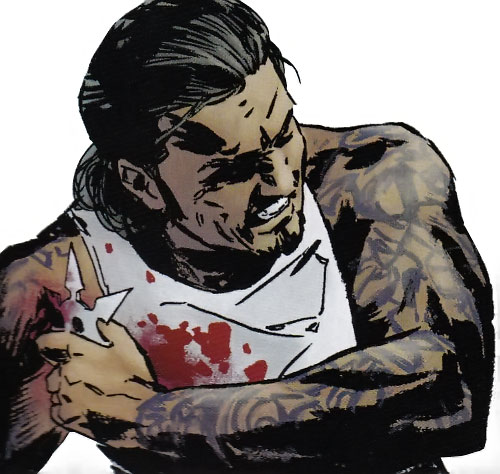 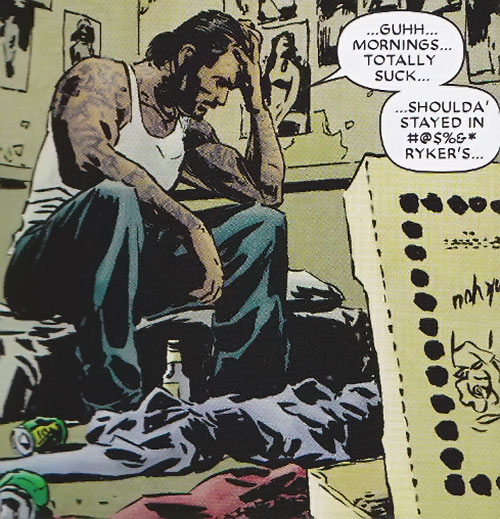