Black Tarantula is superhumanly strong, and heals at a rapid rate. He can share this healing with others by touch.

The Black Tarantula was a South American crime lord based in Argentina. He’s supposedly been around for over seven centuries.

While possessing superhuman powers, the truth was that it was an inherited title. It is passed from father to son – whether willing or not – in utmost secrecy. 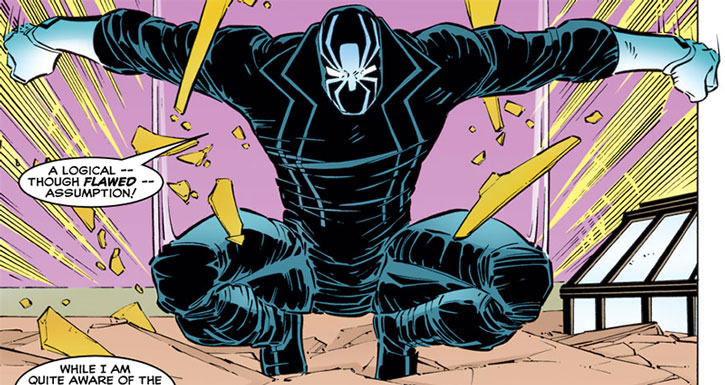 In recent times they’ve been served by a Korean assassin sect known as the True Believers.

The latest in the line was Carlos LaMuerto. Before taking up the mantle he attended college in America, where he met and fell in love with Brazilian student Marina Caches. They were married and had a son, Fabian. When Marina learned of her husband’s occupation, she left taking his son with her.

Continuing to run his criminal empire, Carlos learned Marina had settled in New York. As the NY underworld was still reeling from the Kingpin’s absence, the Black Tarantula made moves on the territory. But mostly, it was an excuse to find Marina.

His agents came into conflict with the Rose’s (Jacob Conover) organisation, and encountered interference from Spider-Man.

With his agents meeting failure, Black Tarantula travelled to New York personally. He reached an agreement over his operations there with Don Vincente Fortunato, who oversaw criminal operations in New York. This agreement didn’t sit well with the Rose.

Carlos sought out Spider-Man, to punish for interfering in his affairs. The fight was quick and brutal. Learning Spider-Man was trying to recover a kidnapped child, Black Tarantula allowed him to live but took his mask. 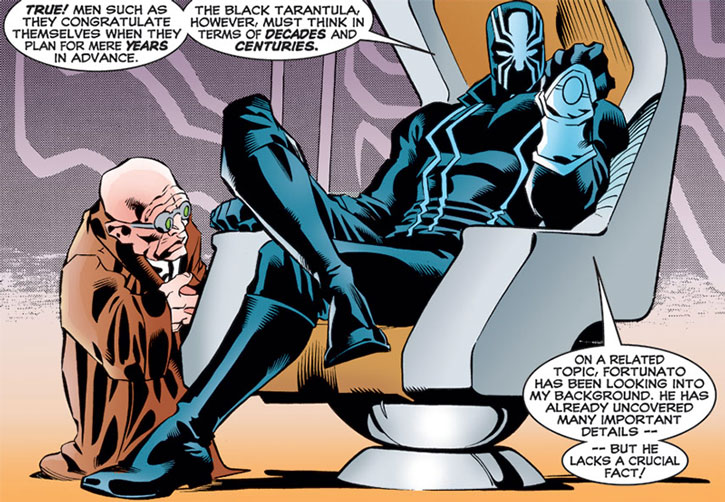 His servant, Chesbro, soon located Marina. She was warned of his presence, and her boyfriend took them to seek sanctuary with his uncle, Fortunato. Black Tarantula followed them there, battling through the guards and Spider-Man.

He fought through all obstacles, only to have Marina beg him not to force their son to adopt the life he’d been forced into by his father. Her plea must have gotten through. Carlos left them alone.

Black Tarantula is a domineering mastermind, dispatching minions to do his bidding around the world. Not that he has any reluctance entering combat himself if honour requires it, absolutely convinced of his own invulnerability.

He runs an international crime network with a steel fist, but has his own sense of honour. After beating Spider-Man close to death, he let him live as the wall-crawler was trying to rescue a kidnapped child.

“Opportunity often floats within a sea of chaos, Chesbro. But I seek more than mere additional wealth in this distant city. Much more. Perhaps, it is fate itself which decrees that the Black Tarantula should now extend his domain into this most lucrative market.”

“A man must seek out new challenges, if he truly wishes to grow.” 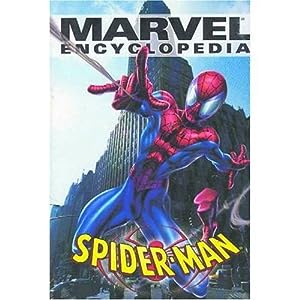 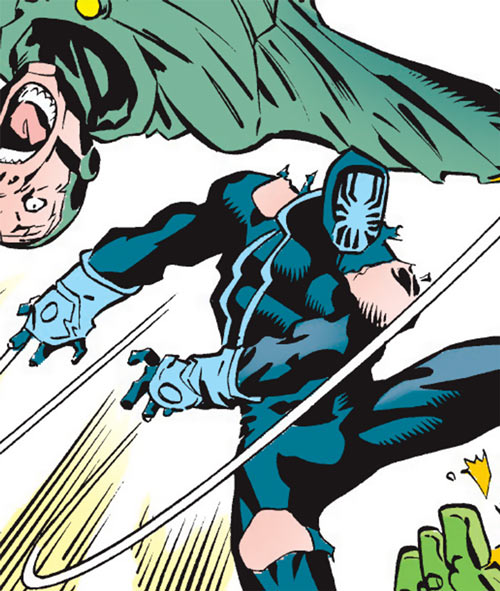