Cassidy possesses the mutant ability to project energy, such as blasts of concussive force, heat, and plasma. Cassidy can only project energy to a limited extent unless it was focused through another object, often his shillelagh .

During the time when his entire body was suffused with vegetative material, he:

In addition to the full powers of his energy blasts. He could also implant bits of his own body within a human being, enabling him to control their body through the implants. Cassidy seems immune to the effects of his brother’s mutant ability to project sonic vibrations.

Cassidy briefly shared power with Cain Marko and possessed half the power of the Juggernaut.

Thomas “Black Tom” Cassidy was the true heir to the fortune and estate of Cassidy Keep in Ireland. That lasted until he wagered it and lost to his younger cousin, Sean, now known as the mutant hero Banshee. Later, both he and Sean vied for the love of Maeve Rourke. Sean prevailed and eventually married her.

While still a young man, Cassidy turned to crime as a way of seeking thrills. He soon became a professional criminal and mercenary. At one point, he was imprisoned in a Third World country, where he met and formed a friendship with Cain Marko, a.k.a. the villainous Juggernaut.

The two escaped using Cassidy’s powers, which he normally kept secret. (It is known that Cassidy was at least once imprisoned due to his cousin’s police work as an agent of Interpol. Whether this imprisonment was referred to remains unclear). Cassidy and Marko became partners, especially after Marko became the superhumanly powerful Juggernaut.

Later, unbeknownst to Sean, his wife was killed in an accident, although Cassidy rescued her daughter (his niece) Theresa (later, the mutant hero Siryn). Cassidy hid the knowledge of his niece from his cousin, and raised her as his own.

When Sean had joined the hero team, the X-men, Cassidy and Juggernaut ambushed the team on behalf of the Shi’ar alien, Eric the Red. Although the X-men escaped, Cassidy had many other attempts to fight the mutant heroes.

Eventually, Cassidy coerced Theresa to join him and Juggernaut in various crimes. Later, when in police custody, Cassidy exonerated Theresa of her crimes. He even wrote a letter to Cassidy explaining who Theresa was, reuniting father and daughter. Cassidy later escaped to pursue more criminal careers.

During a caper, which brought him and Juggernaut in conflict with the mercenary Deadpool, Cassidy was shot in the head by Cable and left for dead.

Juggernaut managed to get Cassidy to help. “Dr. Tolliver” saved Cassidy’s life, using advanced techniques to reconstruct his body, as if merging it with his trademark shillelagh. The process altered his powers and personality, driving him insane.

He soon sought out his cousin’s new team, Generation X. Cassidy bade a criminal contact of his, the mutant known as Mondo, to infiltrate the group. Later, Cassidy and Mondo tried to kill Sean and this team, only to have them escape at the last minute.

Another time, as the wood-virus took complete control of his body, Cassidy attempted to steal the children of Generation X away from Sean, but was seemingly slain by Penance.

Under circumstances yet to be revealed, Cassidy managed to survive. When he later resurfaced, he had no trace of the virus. Cassidy helped the Juggernaut to recover the Ruby of Cyttorak from a cult who had at the time somehow removed the gem and drained Juggernaut of his strength.

His plant powers recently returned with a vengeance, leading Juggernaut to seek help from Charles Xavier.

Cassidy is a medium sized man with black hair, a handlebar moustache, and goatee.

Black Tom is an amoral swashbuckler, filled with hate and jealousy for his cousin, Sean. Black Tom rather appears to see himself as a dashing villain with strong Irish charm and luck, which makes him highly arrogant and prone to overconfidence and excessive risk-taking. He will sometimes take unnecessary chances to reinforce this image.

After his power changed, he became insane and significantly more malevolent.

Black Tom sometimes has long depressive phases, presumably linked to Maeve’s life and death or his jealousy toward Sean Cassidy. During those phases he becomes truly evil. His original career as a terrorist and part of his phase as a wood creature were examples of this.

He works best if he has that familial hate relationship against a hero, and reciprocal immunities. He might have made a marvelous (and fairly powerful) member of the Suicide Squad.

He also might have been an effective Green Lantern (Alan Scott) enemy, especially if using his wood-being powers against GL when still in possession of his wood-based Achilles heel (a reversal of Cassidy’s usual trend).

Equipment:
Shillelagh [BODY 06, EV 03 (04 w/STR, 05 w/Martial Artist). Black Tom uses his shillelagh both as a melee weapon and to focus his Energy Blast and Flame Project. It takes no damage from his channeling the power through it].

Following his “treatment” by Dr. Tolliver (Tyler Nathan’son, son of X-Force leader Cable), Black Tom became a human/plant hybrid (making his body wooden and removing his reliance on his shillelagh to project his energy projection powers).

He gained considerable increases in strength and endurance, as well as extraordinary levels of control over plant life, including the ability to make animated “plant simulacra” that could mimic living people and were completely under his control. He appeared to be destroyed in a confrontation with Generation-X, but has reappeared with his old form and powers restored.

He later began regaining the plant powers (this time, out of control), leading his old partner Juggernaut to seek help from Xavier. 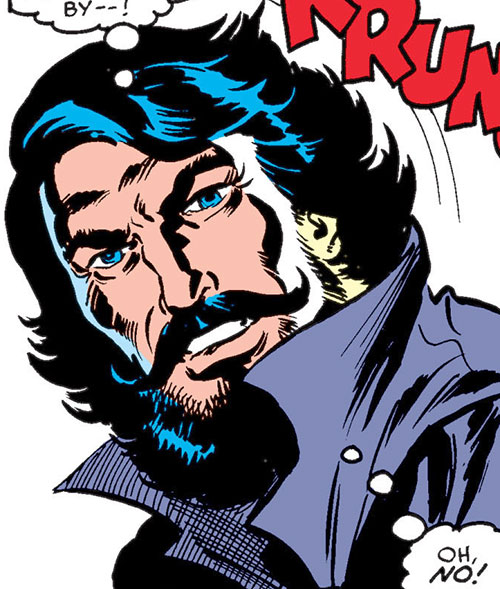 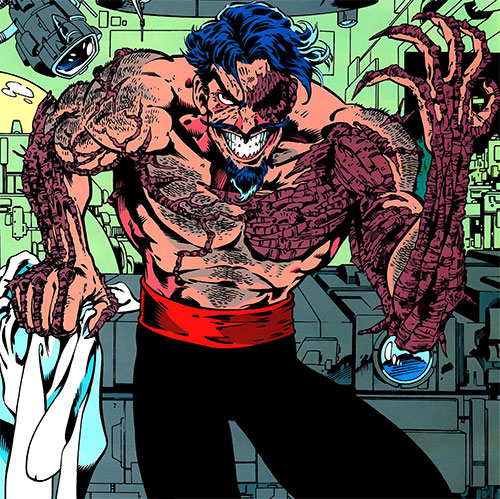