The Black Velvet has ill-defined darkness powers that allow her to, at least:

Her powers also seem to make her unusually resistant to injury. However, it’s assumed that her spirit is fragile. Psychologically, she is a one-track person.

The full extent of her darkness powers is not known. But she is known to be a city-wide threat whenever she loses control over her abilities, which happens if she is severely injured.

Prior to her becoming the superhuman known as Black Velvet, the subject is thought to have been a Harlem prostitute. She and a number of women from the underclass, usually Black, were kidnapped nationwide in 1972. These persons were used as subjects in the experiments of Dr. Lewis Oscar Croft (crossref EAGLE file 1WMG1223CSG).

No data has been recovered on those experiments. But anecdotal and hearsay testimony indicates that they were genetic and mutational experiments. The apparent goal was to develop super-powered enforcers for underworld figures, including: 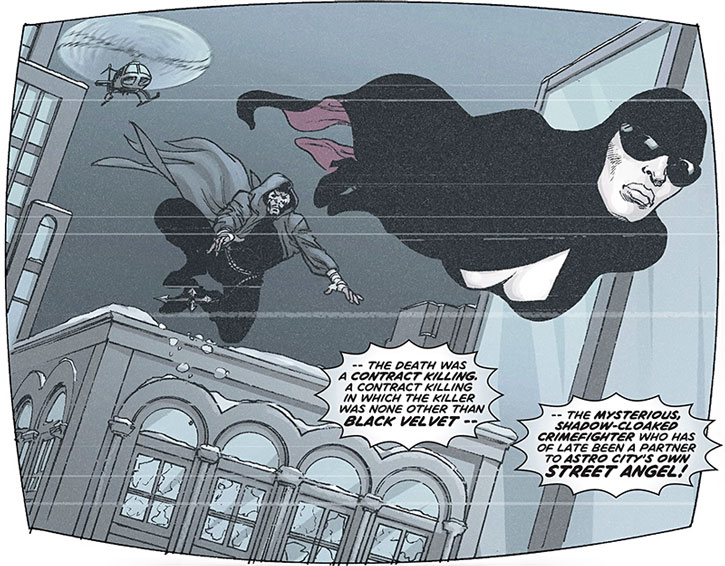 Most experimental subjects were killed, whether the experiments were successful or not. The aim was to pioneer techniques that could be used on male volunteers, not female captives. A few subjects escaped, however, including the subject codenamed Black Velvet.

Testimony and data indicate that the subject was put through painful and invasive experimentation designed to affect physical and metaphysical systems including her limbic, nervous and Kirlian systems. The overall intent seems to have been to affect her inner spirit, or soul, extracting it and altering or strengthening it in ways that would fuel super-powered activity.

Consumed by rage and madness, the subject battled the two intruders briefly. This allowed Croft to escape and destroy most of his records before he was captured the next day. Mister Badd managed to restrain the subject long enough for the Street Angel to discuss with her, bringing her rational mind back into control.

Since then she has named herself Black Velvet. She used ill-classified darkness powers to find and punish those who kidnapped her and aided in Croft’s experiments on her. The experiment left her skin chalk white and, according to testimony, her soul damaged or missing. 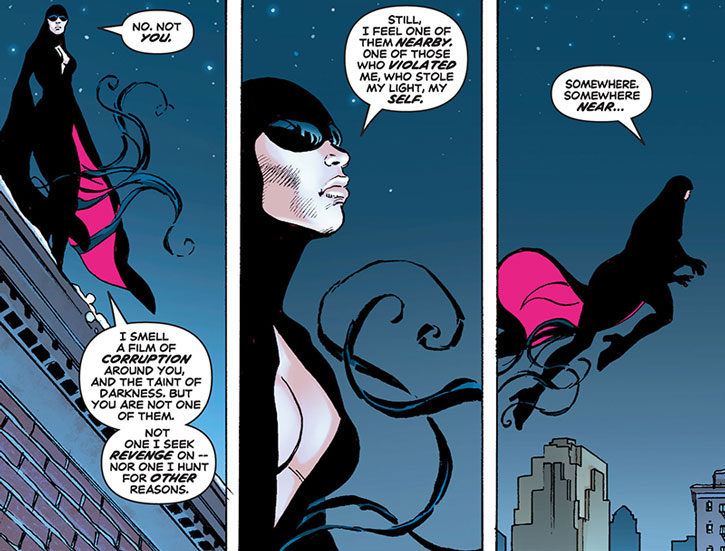 She has been sighted in Detroit, France, Italy, Morocco, New York and Los Angeles. She recently seems to have set up operations in Astro City on a steady basis, partnering with the Street Angel. But little is known about these exploits.

She was mentioned in the news as “the mysterious shadow-cloaked crime fighter who has of late been a partner to Astro City’s own Street Angel.”

Still, the Black Velvet had never felt like a heroine to most citizens of Astro City.

At some point in time, she eventually decided to kill all those who had been involved in her creation. To punish those who had damaged her and remade her. This put her at odds with the Street Angel and he ended up hunting her to stop her from murdering people. She even went as far as working as a contract killer to locate her most dangerous preys.

In 1977, she killed Doctor Croft in Detroit. She had been hired by crime boss “Massacre” Morton.

Newspapers reported of her being a murderer and she became quite feared by the criminal underworld. However, before she could kill off all of her targets she was assaulted by the Pyramid killer named Jitterjack, and was lethally wounded. Dying, she completely lost control over her abilities and unwillingly unleashed a wave of hatred over Astro City.

The result was that every single inhabitant entered a state of rage where they tried to kill everyone else. The Black Velvet was stopped by the time-traveling Silver Agent, who broke her neck in a consensual mercy killing.

As it turned out, Black Velvet’s killing spree among the mob was instrumental in allowing the Deacon to take over the Astro City underworld.

The Black Velvet is an athletic, eerie character in a black, full-body costume. It covers all but her face and her chest. She wears a pair of blue goggles. Part of the costume is a purple or red mantle with black lines, attached to her back and all along the arms.

Most of her powers manifest as strands or tendrils of darkness. Just being in her vicinity, makes you feel cold and numb.

Though her features are clearly African-American, her skin is chalk-white. It is paler and different than the complexion an albino person would have.

The Black Velvet seems to have had a rather grim and cynical personality even before the experiments.

Originally, she seems to have followed the lead of the Street Angel, and they partnered up in the middle of the 1970s and caught criminals. During this era, none of them would deliberately kill.

However, she eventually decided that those who had led to her creation through a process of extreme pain and humiliation had to be punished. The only suitable punishment was death. Perhaps the memories of the past were too much for her, or her own dark powers corrupted her psyche. It has been speculated that her soul was damaged or lost in the event that gave her her powers, in which case she was just following her instincts without any moral or ethical guidelines.

It is also possible that her powers, perhaps subconsciously, also corrupted the Street Angel, which made him a more ruthless vigilante. This point is ambiguous. Black Velvet does have some sort of supernatural presence, but it also seems like Street Angel used this as a convenient excuse — perhaps even to himself — for his own descent into shadows.

The team eventually broke up, and the Street Angel had to instead catch her before she committed mass murder. During this era of revenge, she could not be swayed or made to see the error of her ways. Every single offender had to be killed, even if it were the last thing she’d do – her revenge had to be completed. She never intended to live after that.

She saw evil wherever she went, never realizing that she was often worse herself than those she killed (perhaps she really was without a soul). She upholds stark realism and cold truths where it hurts the most. Whatever she did, however, couldn’t release her from the anger, hatred, shame and pain she felt inside.

She continued to solve ordinary crimes and hunt down criminals while pursuing her agenda of personal vendetta – thus she often had two goals in mind with every criminal she met. This fanaticism led her into sometimes killing other minor criminals as well, while pursuing her real targets, although she would let really minor villains go.

Sometimes she would let people go so that they would lead her to bigger prey. She even went as far as working as a contract killer for mobsters so that she could find even bigger prey, all the while planning to later kill off all the mobsters. She operated in a near machine-like fashion hunting the streets – it was not a good time to be a villain in Astro City.

“No. Not you. I smell a film of corruption around you, and the taint of darkness. But you are not one of them. Not one I seek revenge on — nor one I hunt for other reasons. Still, I feel one of them nearby. One of those who violated me, who stole my light, my self. Somewhere, somewhere near…”

Black Velvet: “You know. The knowledge of the Mortellaro woman roils off you like sweat. Tell us where she — wait. You are one of them. I know you, your hiccupping little laugh. You are one that took my hope, my light. Left me always in darkness.”
“Lefty” Carson: “I wasn’t — I just — a job, it was a job — told us you were just some girl —”
Black Velvet: “I should touch your heart. Touch your heart and release you, let you scuttle back to the others, that we might find the woman. But you are one of them. I — I should touch your heart and release you. But I cannot.” [Carson is destroyed]

Street Angel: “I don’t kill.”
Black Velvet: “Oh ? How many have you left lying in alleyways these past two years, skull fractured, lung punctured ?&emspHow many internal injuries ?&emspDid they all get medical attention ?&emspDid they all live ?&emspDid they ?”
Street Angel: “…. I — I never — I hadn’t thought — did you — Lord in heaven above, I’ve seen you take a man’s soul and turn it inside out. Did you do this to me ? Did you make me into— ?”
Black Velvet: “Oh, you’d like to think so, wouldn’t you ? That you were pure and fine, without reproach — until the evil shadow-witch corrupted you. That it can’t be your fault. Did you ever think maybe — you just liked it ?” [Shramm ! Knocks down the Street Angel with a blast] “I didn’t take your heart, Ramon. You gave it to me. Stay here, and salve your wounded ego. My time in this city is done. But there are still men who hurt me here. There are still men who must die tonight.” [Flies away]

The Black Velvet is a predecessor to the DC Universe’s Hawk character set in the 1970s. Her partner, the Street Angel, was originally the predecessor of Dove, until they both turned corrupt and chaotic.

Drawbacks:
SIA (Destroying those that hurt, humiliated and wronged her), Minor Rage. It is possible that she has an Attack Vulnerability toward bright lights.

It takes great discipline to control the darkness powers of the Black Velvet, wherefore Power Complication Subplots probably are common, as are Role-Playing Subplots where she has to balance ethics and morality.

First, it is possible her power corrupts both herself and everyone surrounding her (using Broadcast Empath). The process, if existent, is slow, and takes at least a couple of months. The effect is that, at times, her Motivation seems to shift towards Seeking Justice / Psychopath.

Second, much of her power is internal and constantly kept in check. The full extent of the Black Velvet’s powers has not been revealed, and AP-levels could arguably run higher. If she is hurt bad and dying, her powers will manifest themselves on a higher level and then she can’t turn them off.

In game terms, whenever Invulnerability is used, she completely looses control over all her powers and they become Uncontrollable – as a result, she is then hovering in the air in great pain attacking everything within range (-1).

The spreading darkness is so great that all of her powers are considered double their normal values (for example, her normal Broadcast Empath of 08 APs temporarily becomes a full 16 APs), making her a city-wide threat. She will remain in this state until she is either healed or dead.

Also, since her powers are partly based on her altered Kirlian system it is possible that all of her powers are Mystic Linked. In addition, the Black Velvet might also have powers that affect the spirit, such as Magic Blast. 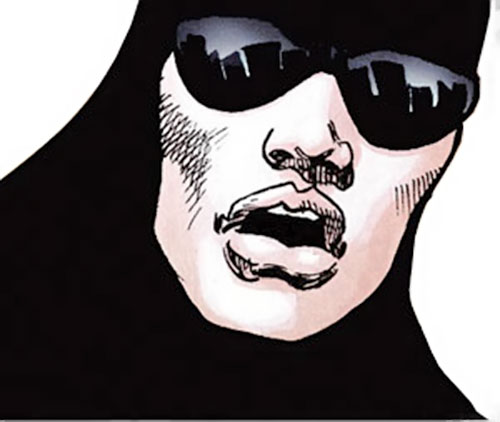 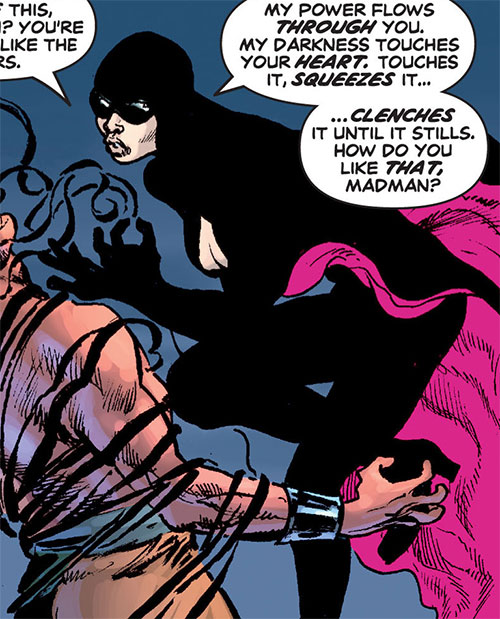 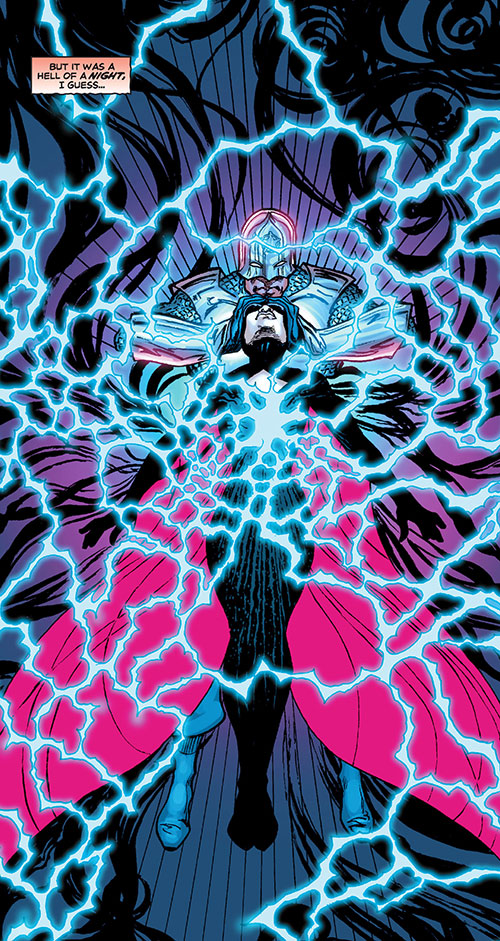