Mary Roche was working in a USO canteen in 1942 in the South Pacific. She desperately wanted to play a bigger role in the fight against Fascism. Unfortunately, as a woman, there was little she could do.

(Which isn’t quite historically correct. See our Carol Danvers profile for more about women in military aviation — Ed.).

At last, nothing officially. She began training in secret with a customized pursuit plane, practicing until she could outfly any man on either side of the war. She painted her plane the color of midnight and donned the black leather of the Black Venus. She quickly became the scourge of the Axis, both on the ground and in the air.

After the war, civilian life was dull by comparison. She gladly entered the Vault of Heroes, content to slumber until such time as there was a call to action once more.

Awakened to fight in the Shroud War, she was thrilled to find herself in an era where women were finally appreciated and the color of her skin was not a barrier.

Black Venus is a very task-oriented person. She believes in black and white, good versus evil. To her mind, there are no grey areas. She tends to come off as a cold fish in person as she has little patience for socializing. 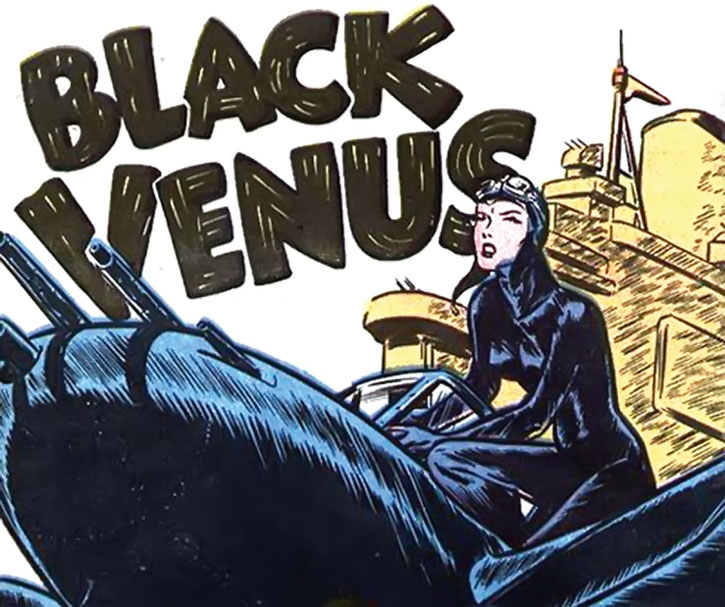 At the moment she is drifting. The Sentinels don’t have much day-to-day use for a pilot, and there hasn’t been a real crisis since the Rurians invaded. However it is only a matter of time before she finds a cause somewhere to throw herself into.

“You call that flying ? Give me that yoke !”

Most of the Sentinels are Vault heroes, heroes from the 1940’s and 1950’s. They willingly entered suspended animation to wait until they were needed again. The Vault heroes were activated during the Shroud War and have been trying to adapt to the future ever since.

In the DCU, the Vault heroes can be Golden Age  heroes (just add them to the already immense All-Star Squadron roster). Black Venus could very easily be added to the Blackhawk roster during the war. Like Femforce, they could be an arm of Task Force X, perhaps operating under the command of Sarge Steel.