Cpt. Belova is an incredibly gifted and highly trained special forces operative, martial artist, gymnast and special agent. She is highly adept with all kinds of weapons, and can easily defeat large numbers of armed opponents.

Although she is still young and naïve, she’s very smart and is learning how to become as devious and ruthless as her predecessor.

The most venomous land creature on Earth

The Black Widow is the result of a special GRU program, a daring experiment both in the domains of secret warfare and propaganda. The goal of the program was to demonstrate Soviet superiority by creating a perfect agent. She was to be the venomous fangs of the State, able to shear through the Cold War covert battlefield and hit the imperialists whenever and wherever she wanted to.

The Black Widow would be trained at the Red Room, the top covert work academy in Russia, near Moscow.

The Black Widow would be female, to demonstrate the greater equality of the Soviet Union and destabilise male opponents. She would be constantly manipulated by the best the KGB and GRU had to offer, their vicious mind games leaving her incredibly dedicated and relentless.

She would be trained from childhood with great emphasis on gymnastics and the martial arts, like the child-athletes who were earning hundreds of gold medals at the Olympics.

The first known Black Widow, Natalia Romanova, was a success. She provided the material for much State propaganda until she defected. Modern Russians now consider her a myth. But the efficient propaganda means that the persona of the Black Widow is still considered pure death and ultimate skill.

Unknown to most, the sophisticated Black Widow project also included a program of biochemical augmentation of the agents, hypnotic conditioning and sleeper agents.

Yelena Belova was 15 when it became clear that the legendary Black Widow (Natalia Romanova, aka Natasha Romanoff), had deserted the Soviet Union to become an adventurer in the US. Belova was recruited by the Red Room of that time. She had been spotted for her exceptional physical condition, IQ tests and talent for gymnastics, and was meant to succeed Romanova.

Belova trained for years in an incredible regimen. Her main instructor, particularly in hand-to-hand combat, was a veteran sub-colonel of the GRU, Vasilievich Pyotr Starkovsky. She eventually became skilled enough to outfight the grizzled fighter, whom she viewed like her second father. 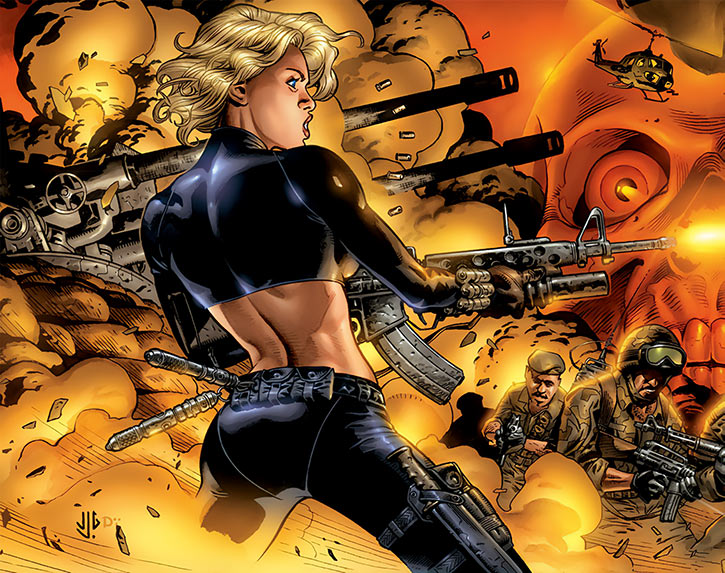 According to one account, Starkovsky reciprocated and considered Yelena like his daughter. Howbeit, he started developed a strong sexual attraction toward her as she grew up, which became an obsession. The sexual tension during close combat training became unbearable for the sub-colonel – although this flew right over his young charge’s head.

However it remains unclear to this day whether this account about Starkovsky was exact. The fetish club was a GRU front allowing the military intelligence organization to keep an eye on the decadent Moscovite elite. It wouldn’t be the first time that it was used to fabricate a case against an undesirable official.

One day, Starkowsky was found dead, apparently killed by Petra. The prostitute had gone crazy and was now convinced she was the real Black Widow.

Belova was shattered by the loss of her father figure. A terse, abrasive general broke the news to her. He added that Starkowsky had been stealing state secrets about the Black Widow program. Investigating the missing documents, Belova ordered the Moscow police to let her handle the case. She started interrogating the staff of the Fabrika club.

Belova then started stalking the previous Black Widow (Romanova), wanting to prove that she was better than her. Romanova, who was at that time investigating a highly dangerous artificial virus. Yet Romanova kept outmanoeuvring Belova and brushing her aside. Until she was apparently shot dead by SHIELD agents.

Answering Romanova’s communicator and still in shock over seeing the Widow’s corpse, Belova unthinkingly took over the Widow’s mission. She continued her work since all she knew and wanted was to be the Black Widow.

While attempting to steal the virus, Belova was captured – only to run into Romanova again. Knowing that she wouldn’t get rid of Belova otherwise, Romanova had faked her death long enough to complete her mission without interference.

Belova weakly tried to kill Romanova, but the elder Black Widow knew Belova wouldn’t pull the trigger. The younger Widow’s pathological need to match herself against her role model was too strong. Using a trick she had learned from watching Romanova, Belova then escaped.

After this clash Romanova, pitying the brainwashed youth, ran some mind games of her own. She had Belova captured and surgically altered by S.H.I.E.L.D. to become her physical duplicate, and had a similar operation performed on herself to look like Belova. Romanova then let Belova wake up in Romanova’s apartment, and briefly encounter Daredevil.

Belova managed to mentally hold together and play along. She reasoned that she must have been on some sort of deep-cover infiltration mission gone wrong. She then received orders from a fake Russian courier – to kill Yelena Belova.

“Romanova” tracked “Belova” down and confronted her, but Romanova-as-Belova kept role-playing Belova. ”Belova” then went on to accuse “Romanova” of wanting to replace her because she was jealous and knew that she was too old to be the real Black Widow. Belova-as-Romanova shot Romanova-as-Belova, thus seemingly killing herself.

Starting to unravel, she ran away.

Meanwhile Romanova, who had again faked her death, infiltrated the Russian underworld as Belova. She ended up confronting a general smuggling nuclear weapons. The man was one of Belova’s superiors, and Romanova and Daredevil arranged for the confrontation to take place where Belova would overhear it.

Discovering that “Belova” was a fake, the general boasted that he would kill her just as he would eventually kill the real Belova, who was nothing but a pawn to him.

Once the incident was over, Romanova explained to the dismayed Belova that she had orchestrated the whole machination to make her realise a simple truth. Yelena was an instrument and not some sort of heroine. Romanova wanted to help Belova grow out of the naiveté that would otherwise result in her death.

Both women’s physical appearances were switched back, and Belova walked away distraught but wiser.

Yelena is quite young and very eager – naïve, in fact. She is in many ways a sheltered teenager, only trained as an uber-special-forces commando and agent. She feels somewhat awkward and has some occasional little-girl-like quirks, such as wearing bows in a typical cute girlish teenager hairdo.

When she learned of Starkowsky’s fate, she had a tough time repressing her tears and violently lashed out against a police detective out of grief.

Yelena is obsessed by Natalia. Her life is meaningless if she cannot prove herself to be better than the previous Black Widow. This all-consuming obsession is not natural – it was greatly reinforced by GRU psychological tricks. Yelena comes across as being way too systematic, neurotic and unnatural when she obsesses about scoring higher than the Widow on tests and doing everything Natalia does, only better.

Yelena is also a genuine patriot, quite ready to kill and die to defend Russia. She’s very eager and emotional about this, and her reflexive attachment to the Motherland smells a lot like sublimation. She doesn’t talk about her patriotism. Hers is not the rhetorical, sentimental sort but a strong emotional reflex of not letting anybody hurt Russia and Russians.

Specifically, she approaches thing as if she were a super-heroine (a sort of Russian equivalent to Captain America or Superman, maybe) rather than a special agent. Because that makes it much easier for her handlers to manipulate her.

Despite her youth, Yelena is smart, professional, resourceful and can think on her feet. It is only when matched against devious, highly experienced operatives with nerves of steel like the Widow that she doesn’t look on top of the game. Lesser opponents will get sheared through.

Yelena : “Romanov scored better.”
Lika : “You should stop comparing yourself to her.”
Yelena : “She scored BETTER, Lika.”

General Tischenko : “Why aren’t you in uniform, Captain Belova ?”
Belova : “Begging the General’s pardon, but this IS my uniform.”

“That’s right. I am the first student in history of the Red Room to surpass your marks. I may lack your experience, but I am your equal or your better in every other respect. *I* am the Black Widow. ”

(Fury about Belova): “Thing of it is, Daredevil, blondie down there sees things like you do… she thinks she’s a super-hero… but Natasha, she’s the Black Widow, she’s the real deal. She knows better. She knows espionage is nasty business.”

Yelena could easily replace the DCU’s Echo. In the DCU, as an added irony, Natalia Romanova would never have existed – a mere Cold War fiction, but fed as reality to the eager Belova. 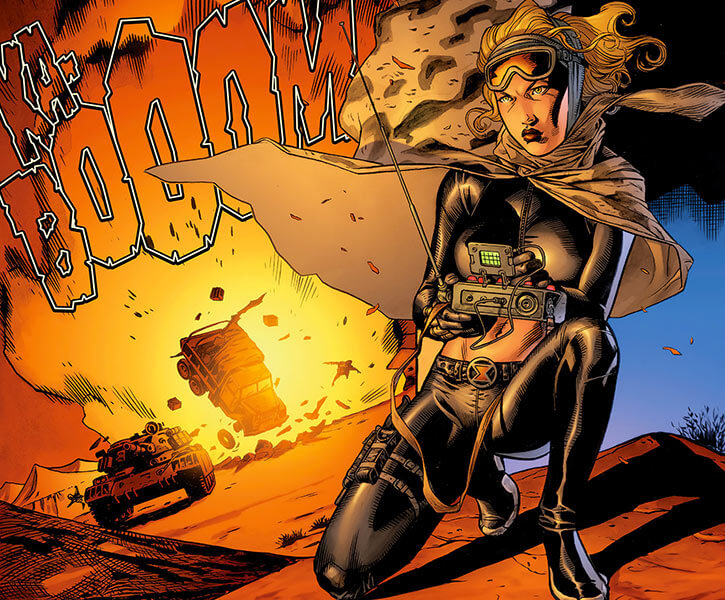 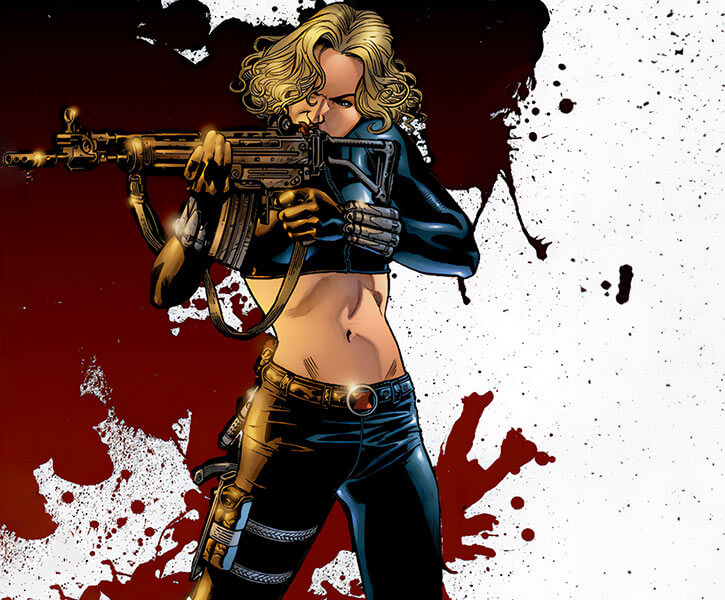