The Black Widow wields the “power of evil”, granting her numerous abilities. Notably :

These are the more common effects. She can wield infernal magic to do many other things, but these are less frequent. Despite the source of her magic, it doesn’t have to be used for evil purposes. For instance, the Widow could magically heal a child.

The Widow does much of her work as an ethereal presence. She would thus espy, influence people and shadow them as an invisible and intangible presence. This allows her to act ominous and almost unstoppable. Like a nightmare the Widow is impossible to lose, can appear anywhere, and seems to know everything.

Somehow, the existence of the Black Widow is known to all evil criminals on Earth, and they are all terrified of her.

She also possesses a formidable presence and personal magnetism.

As often on writeups.org, the sub-section titles in this entry are song lyrics. It’s from one of my Rolling Stones favs (from the 1997 Bridges to Babylon). And of course, as I happen across them whilst copy-editing this profile, I have the song stuck in me head.

And so shall thee.

Claire Voyant was a medium. She conducted séances  to contact the spirit of dead relatives of her clients.

In 1940, she allegedly attempted to contact the spirit of one Mr. Wagler. Something went wrong during the séance, and she was influenced by “Satan” to put a curse on the Wagler family. Her customers left in outrage at her witch-like imprecations.

On the way home, the Waglers’ car swerved and crashed. Mrs. Wagler died outright. James Wagler was unscathed, but he lost his fiancée (or perhaps wife), Patricia. Unhinged with grief and prodded by “Satan” James Wagler blamed the curse uttered by the crazed medium. He broke into Claire Voyant’s home and shot her dead.

Satisfied with how his plan had come together, “Satan” swept in to collect the dead medium. Once back home, he turned Claire Voyant into his newest servant, the Black Widow. He then let her return to Earth for a brief time to kill James Wagler with her widow’s touch.

As she returned, “Satan” explained what her mission was. “On the upper world are mortal creatures whose hearts are blackened with wickedness and corruption. You, the Black Widow, will bring their evil souls to me !”

Pleased to meet you, hope you guess my name

In the Marvel Universe, “Satan” has been used as an alias by sundry demons of varying power to augment their clout over mortals. The best-known impostors are actually extremely powerful netherlords in their own right — such as Mephisto, Satannish, Lucifer or Marduk Kurios (the father of the Son of Satan).

Given the general style of “Satan” in the Black Widow stories, my bet would be that it was Mephisto.

The Widow’s job is to bring “Satan” strong corrupted souls. This would make little sense for the Christian figure of evil. Those souls would likely be his anyway, and grabbing them that way violates the whole free will and redemption thing. But it matches known interests and strategies of Mephisto.

And could you stand the torture

The Black Widow was next sent after the soul of crime boss Garvey Lang. She influenced one of his henchmen to rebel against him, so Lang shot him. The Widow then manipulated another criminal to give the impression he had betrayed Lang – who murdered him.

She then infiltrated a masked ball, letting her beauty tempt Lang into flirting with her and taking her aside. They then both took their masks off. The Black Widow turned her pupils into skulls that claimed the soul of the horrified Lang. 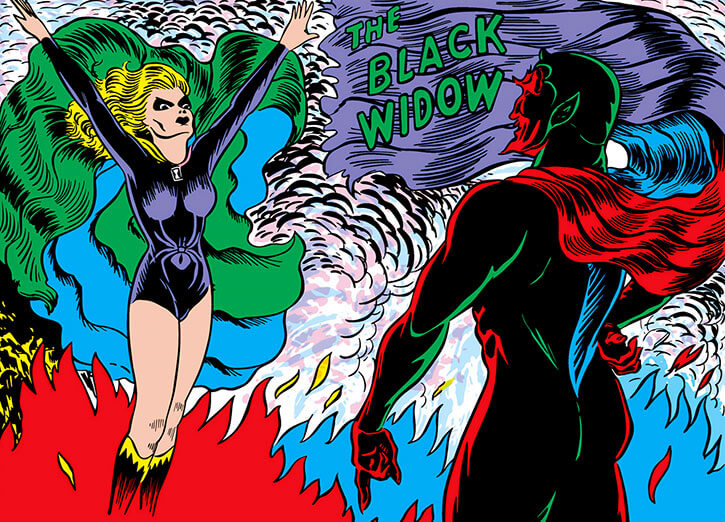 “Satan” then spotted two more men who were so evil that he would not wait for their souls. These were Lewis and Sykes, at Groome Ammunitions. These men were planning to sell ammunition to both the Axis and the Allies. Apparently the Netherlords support the Allies and consider that betraying America is one of the gravest sins.

The Widow, as Claire Voyant, walked into the Groome offices to offer her services as a secretary. Thanks to her attractiveness, she was hired on the spot. But she revealed herself as the Black Widow once she was alone with Lewis, killing him with a touch.

Sykes then came in. He instantly recognised her, and fled in terror to barricade himself in his office. But the Widow passed through the door like intangible mist, ignoring his gunfire. He threw chemicals at her, which seemed to hurt the agent of Hell for a bit. But she then threw her cape over Sykes, killing him, and left.

And could you stand the pain

The Widow was then sent after Karl Koodamore, the head of Murder Unlimited. “Satan” said that this man was almost as evil as he was, and thus an upstart. The Widow came in just after one of Koodamore’s killers murdered a famous thespian. The late actor had been seeing the wife of Koodamore’s current client.

The infernal beauty killed two of the thugs. She then stalked Koodamore to his hideout. A Murder Unlimited hitman committed suicide rather than let her touch him. Koodamore fled for hours in his car. However, the Black Widow just appeared in the middle of the road. Koodamore tried to run her down, only to drive his car over a cliff.

When you’re burning in the flames

In late 1942, the Black Widow seemingly joined an Allied mission on a Nazi stronghold, led by the Invaders. My No-Prize Hypothesis  is that it was psychological warfare, with a female operative wearing a Black Widow costume.

Presumably, the hope was that the Germans had heard about her and would be suitably terrified. Given the unholy terror the Widow inspired in “men of evil” who inexplicably could recognise her on sight, this may not have been an unreasonable trick to try.

There is also one confirmed impostor. During a time travel mission, Ms. Marvel (Carol Danvers) disguised herself as the Black Widow to diminish paradox friction.

And I do believe in miracles

In 1943, “Satan” noticed a particularly evil man named Ogor. Ogor pretended to be a mystical healer, and forbade people from seeing real doctors while they paid him. This led to the death of many a gullible person. 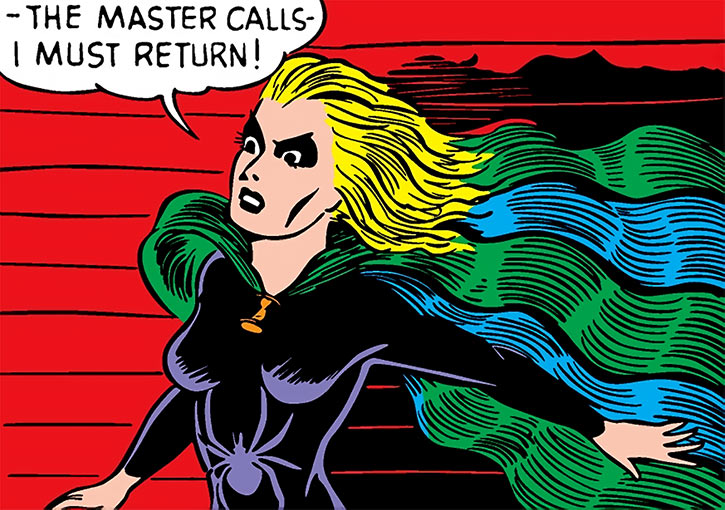 But the father of a young patient got wise to him. Ogor murdered this man, and immediately left town with the fortune he had made there.

The Black Widow caught up with Ogor, who died of a heart attack. But before returning to Hell, the Black Widow snuck into the sick orphan’s house. Due to Ogor’s machinations, it was too late for conventional medicine to save the boy’s legs. But she used her infernal powers to heal the kid.

And I want to save my soul

A woman who… looked vaguely like the Black Widow was seen in a flashback. It depicted a gang bust by her, the Angel (Thomas Halloway), the Falcon (Carl Burgess) and the Challenger (Bill Waring) during the late Golden Age . Officially this woman was the real McCoy, but this seems… dubious.

Perhaps the Allied operative seen in 1942 continued to work with mystery men. Perhaps she used the Black Widow’s guise to terrify criminals. Who are, I’m told, a superstitious, cowardly lot !

The Widow wears a dark purple long-sleeved legless leotard with a spider design on the stomach. Her cape design consists of wide blue and green vertical (yes, vertical) stripes. Her dark high-heeled boots are the same color as her leotard, and have a spiky yellow fringe. Her face is oddly spooky, with pale skin drawn against her skull and lots of eye-shadow.

Her costume and exact appearance changed as she went through artists. Many of these illustrations were unusual for the times as they quite directly emphasised her curves and naughty bits, such as the underlit breasts in the main picture.

The illustration below is the 2007 visual recreation of the character by Chris Weston. It is based on Veronica Lake . 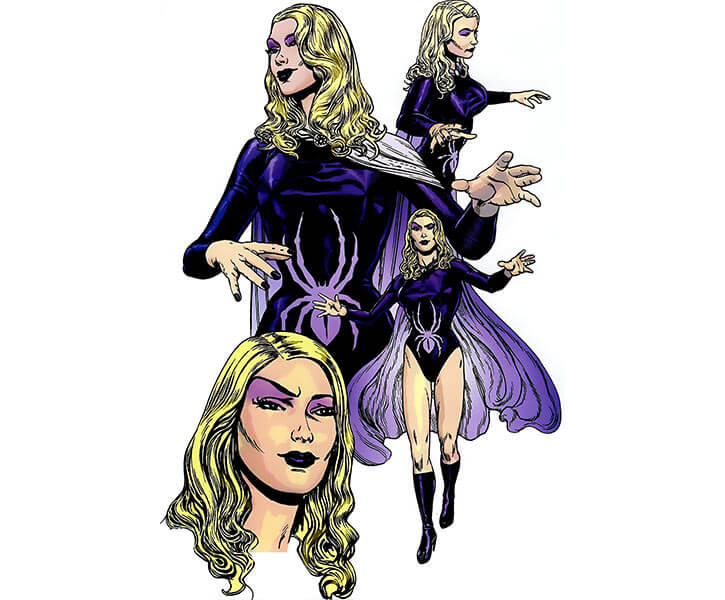 The Black Widow is an obedient servitor of “Satan”.

Her goal is to give her target a pervasive sense that everything is going wrong, and that some kind of grave curse is coming. They must understand that they are about to be punished for their sins. Thus, she will set the stage up by manipulating events and people, likely goading her target into committing more sins. She may also kill a few secondary targets as part of this setup.

Then she moves in for the kill.

Yet sometimes, the Black Widow just barges in and kills her main victim. There may be factual or mystical reasons for this, or perhaps she just handles the mission according to her mood.

Between missions, she apparently just lounges around in Hell like a bored 1940s movie star.

And I know that I’m a sinner

The Black Widow claimed to be helping the “oppressed on Earth” by getting them “rid of the evil element !”. Her actions are indeed that of a killer vigilante rather than those of an agent of evil.

Odder still, the Widow openly admits her agenda of lethal justice to “Satan”. But the Hell-lord does not seem to mind as long as the mission is accomplished. Even gratuitous acts of goodness on the Widow’s part are fine by him, as long as he gets the soul he ordered.

“Vengeance has been mine… the master calls – I must return !” 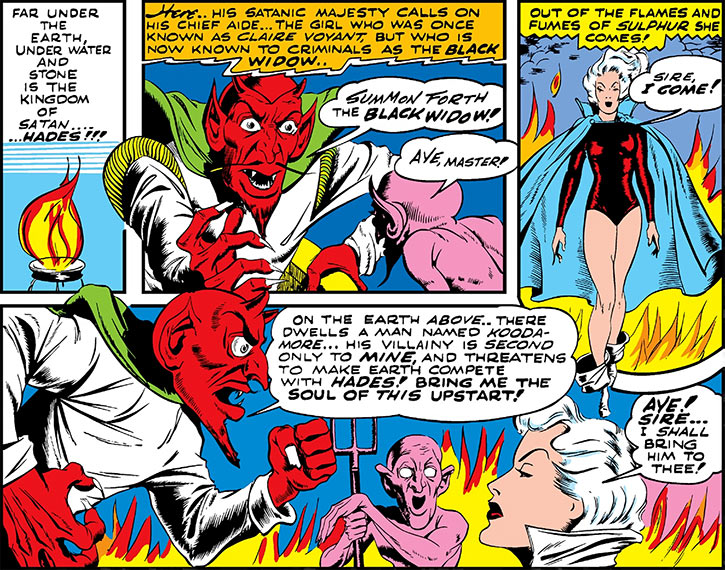 “Evil one, I claim your soul for Satan !”

“And so, the Black Widow is going to take your evil, merciless soul to the place it belongs — are you ready ? Lewis — come !”

“And now… you must pay for your heinous crimes !! The Black Widow will not be cheated !”

(Breaking the fourth wall ) “I’m not on Earth now, but as soon as I learn of evil which must be met with quick punishment, I shall travel the great distance and return to your people to treat them to — death !”

“And so, I’ll bring my cargo to Hades ! But let the evildoer beware… for wherever he strikes… there he will feel the deadly sting of the Black Widow !”

Drawbacks:
CIA toward Accomplishing the missions given by Satan, Distinct Appearance (worth zero points thanks to Chameleon).

By Sébastien Andrivet and Sean MacDonald. 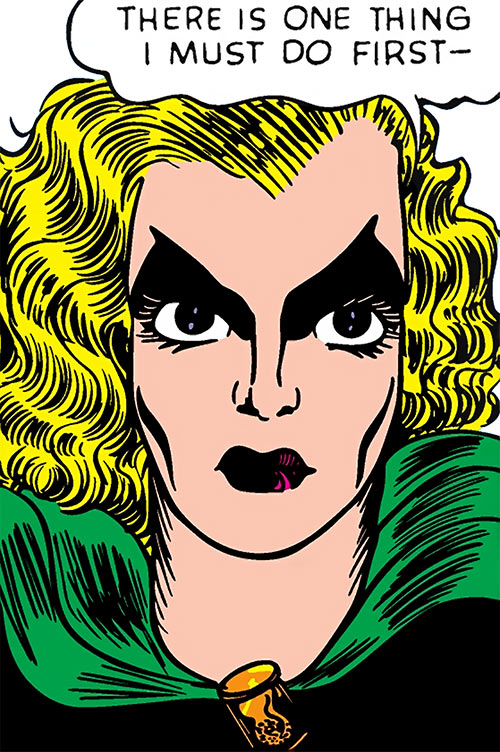 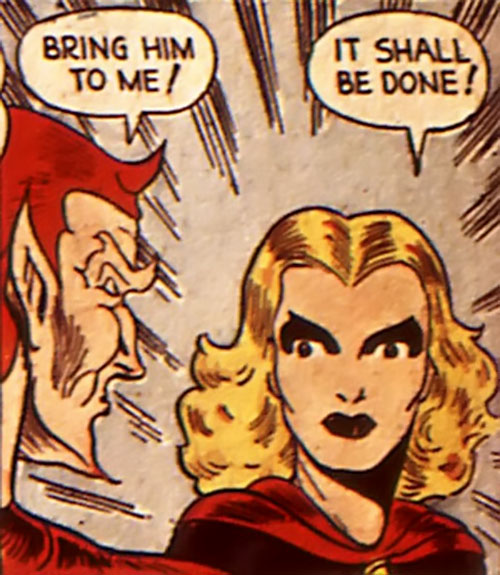 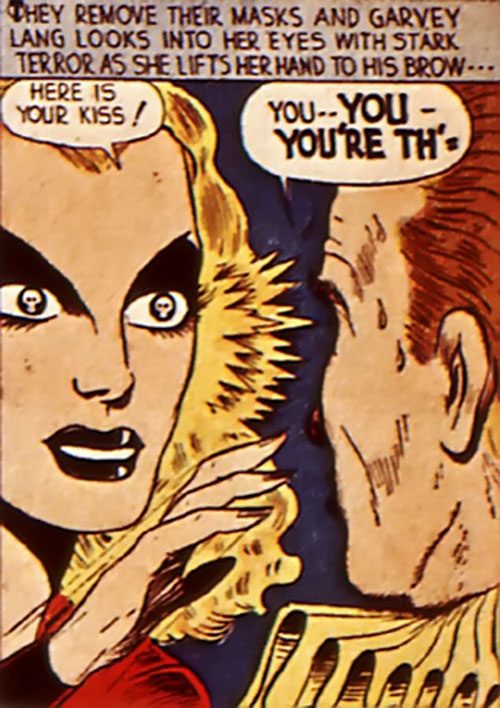 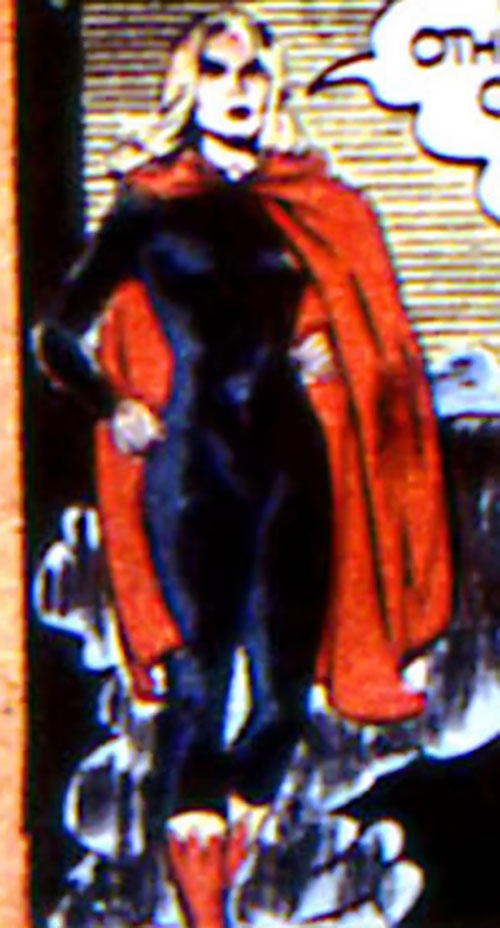 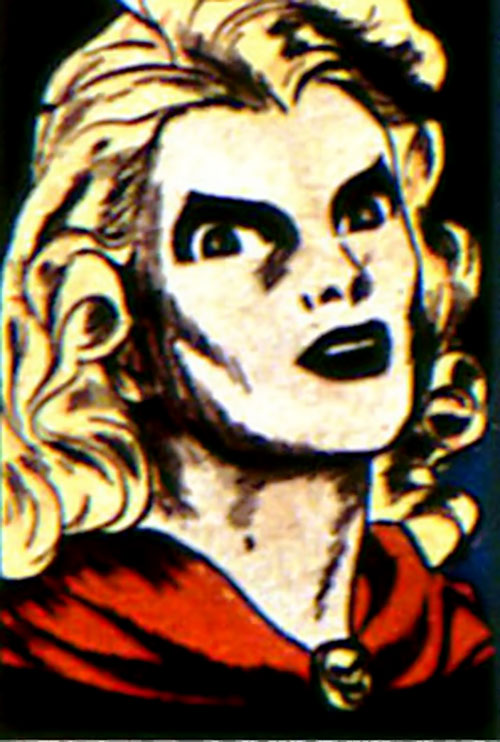 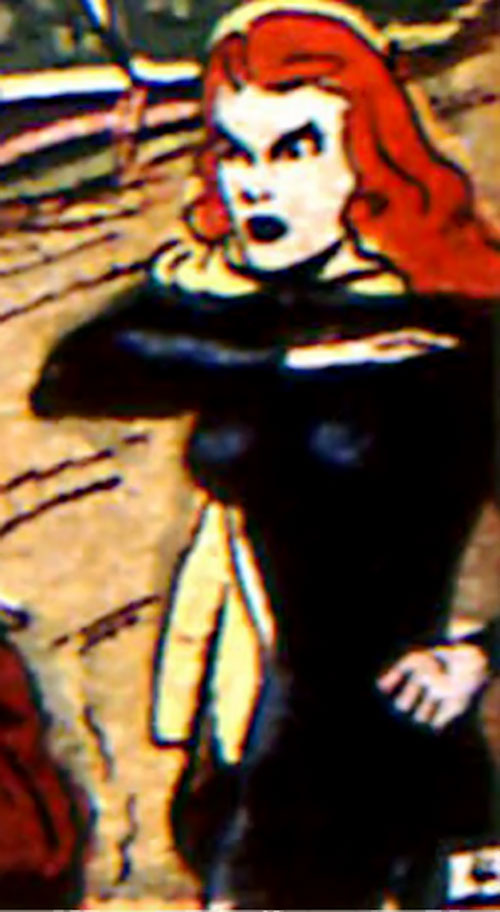 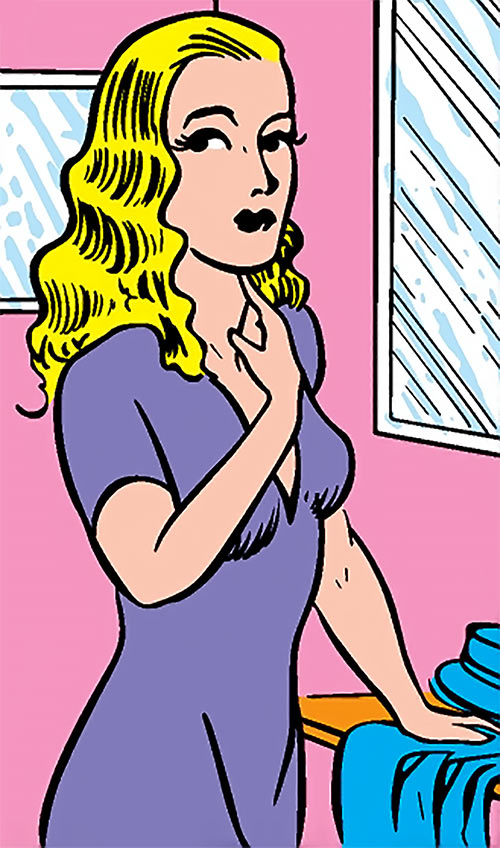 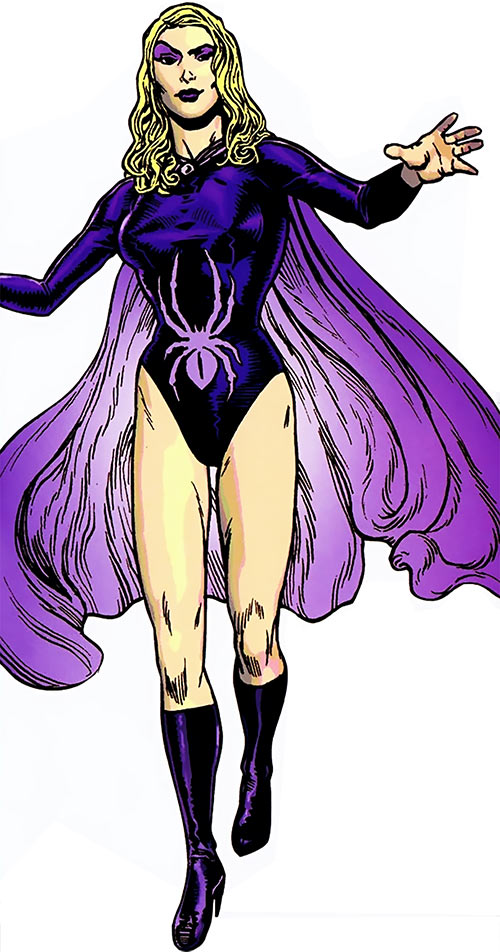