The Widow is now depicted as being much more physical. She’s skilled in acrobatics, break-ins, stealth, ranged weapons, etc.

The main exception to this is her hand-to-hand skills. She’s fast and agile but not strong or tough, and doesn’t slug it out in melee during period appearances.

This is mostly a dated genre convention about violence and women, and is ’lifted‘ in later flashbacks that take place during this era.

If you want to keep the 1960s style, in DC Heroes remove her Martial Artist’s EV and RV substitution Subskills. She also won’t generally spend HPs on LDD – it”s just accepted that she’s easy to knock out.

Despite this modest physical durability, Natalia repeatedly makes fast, full recovery from serious wounds and drugs-induced brainwashing during this era. In hindsight, these can easily be retcon-rationalised as the effects of the Kudrin enhancements.

Natalia easily broke into and stole from a highly secure US military base using stealth and acrobatics. This, rather than seduction and manipulation, is now her preferred mode of operation and she no longer uses her femme fatale skills.

Her theme is now a beautiful spider-woman infiltrator who sticks to walls, sneaks around in the dark, and shoots “webbing” (her line) and “venom” (her electrical sting). She has few Hero Points , and when facing super-heroes-level threats she will usually get captured.

Her piloting talents also appear in period material for the first time, after she steals an American jet fighter.

Natalia Romanova was forcibly returned to Moscow, and taken “to the comrade leader, just before his fall from power”. This is presumably a reference to the ousting of Khrushchev  in late 1964.

Khrushchev wanted her to kill Iron Man, who frequently clashed with Communist agents. He ordered an engineer named Brushnev to build special gadgets for her. When Romanova resisted, he produced her parents and threatened to have them shot, forcing her hand. 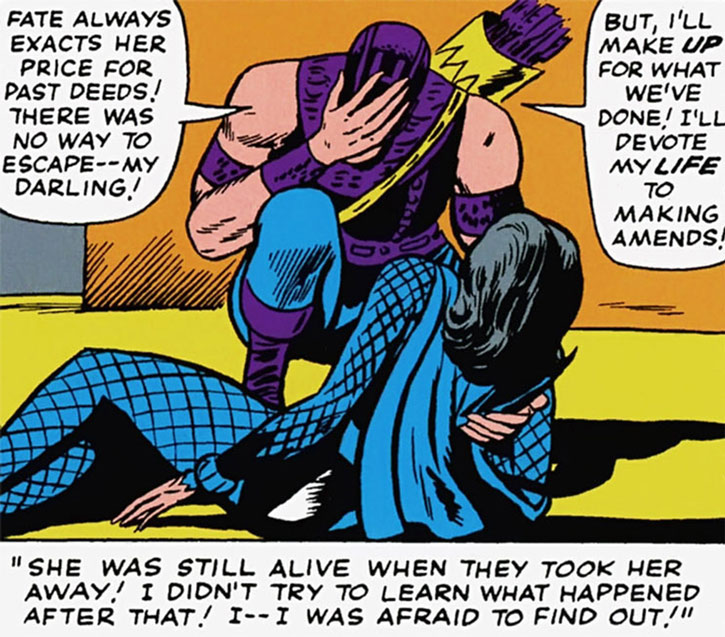 This sudden reinvention of the character by Stan Lee  works well with both the historical context and the latter retcons. Specifically : 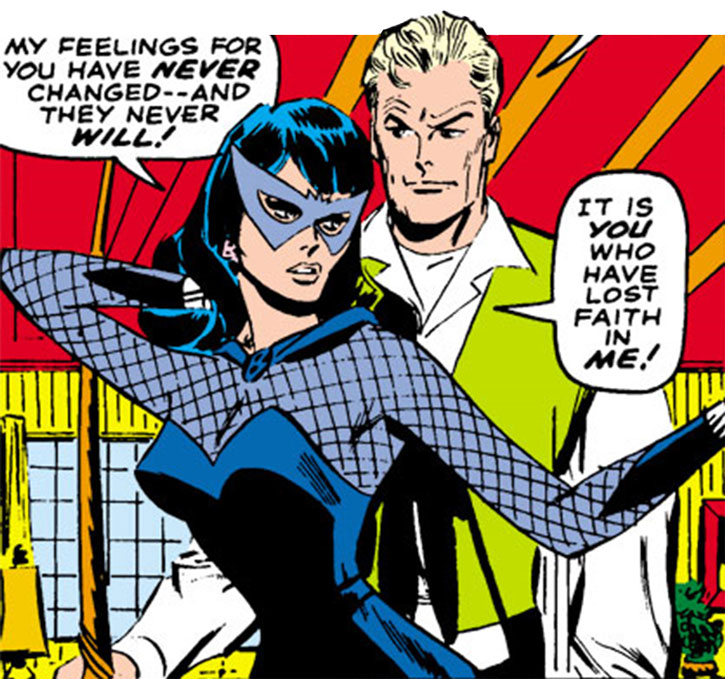 After her meeting with the comrade leader, the Widow returned to America and her lover Hawkeye (Clint Barton) to explain what had happened — and announce that she was going after Iron Man. The archer decided to come along rather than lose her again, and helped her kidnap “Happy” Hogan and “Pepper” Potts to set an ambush for Iron Man.

Stark easily dispersed the Soviet gunmen participating to the ambush, but found the Black Widow and especially Hawkeye far more dangerous. To force them to retreat he blasted the Widow with his repulsors, and Hawkeye opted to flee to get his lover to a doctor rather than stay and kill Iron Man.

This was the wrong decision. Soviet intelligence now wanted Romanova dead for her failure, and she was soon gunned down in the street by hitmen. Hawkeye shot the gunmen and rushed her to an hospital, saving her life. However, before she had recovered from her gunshot wounds, Natalia Alianovna was kidnapped and taken to China.

After one Dr. Yen brainwashed Natasha, she was sent to take the Avengers down. To do so, she recruited the Swordsman (Jacques Duquesne) and Power Man (Erik Josten), but failed to recruit Hawkeye. Nevertheless, the Widow and her men captured all Avengers but one.

Goliath (Henry Pym) freed his colleagues, but the Widow escaped with her henchmen. Her team attacked anew, again starting with Hawkeye – but seeing the archer threatened broke the brainwashing and brought her back to her senses. 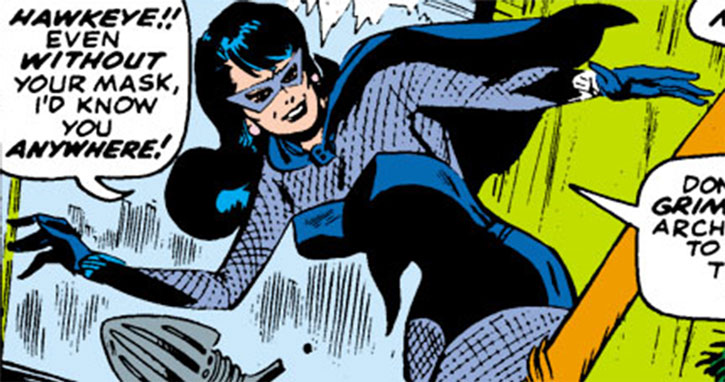 To allay distrust, the Widow allied with Hawkeye to help the Avengers defeat the Sons of the Serpents, an American racist conspiracy. She provided intelligence and some stealthy help, and helped arrest the Sons’ leader.

She also proved instrumental in defeating the alien Ultroids, who sought to use the Avengers’ oath against killing to stalemate the heroes. Natasha intimidated their leader Ixar into surrendering, reasoning that since she was not an Avenger, she was not bound by their oaths.

From that case onward she remained an associate of the Avengers. She and Hawkeye were also apparently living together. Hawkeye wanted the Widow to be formally made an Avenger, but Goliath objected to this. Meanwhile the Widow was in talks to join S.H.I.E.L.D..

The negotiation took place directly with Colonel Nick Fury. While S.H.I.E.L.D. itself had been founded very recently, Fury knew about the Red Room and the Black Widow program from his CIA days. He had apparently never shared this knowledge, which he presumably gained during a solo mission.

Among other things he had stolen a special chemical scent to which Black Widow agents had been conditioned to react obediently.

Thus, he was able not only to cement her defection, but to have her start working against Communist countries. However, he sensibly pitted her against mainland Chinese interests rather than Soviet ones. In minutes, S.H.I.E.L.D. had gained whom would arguably be their best agent for decades. Romanova only learned about the chemical used to manipulate her 40 years later.

S.H.I.E.L.D. made it look like the Widow had betrayed the US, giving her an hypnotic conditioning so she would think that she was pro-PRC until some triggers were met. They then sent her back to China to infiltrate the target’s assets.

S.H.I.E.L.D. was after one Colonel Ling. From historical context it seems that Ling and his Soviet allies had gone rogue, and were no longer answering their respective superiors in the PLA or the Red Army. They controlled an experimental weapon of mass destruction called the Psychotron, which the Widow was tasked with destroying. 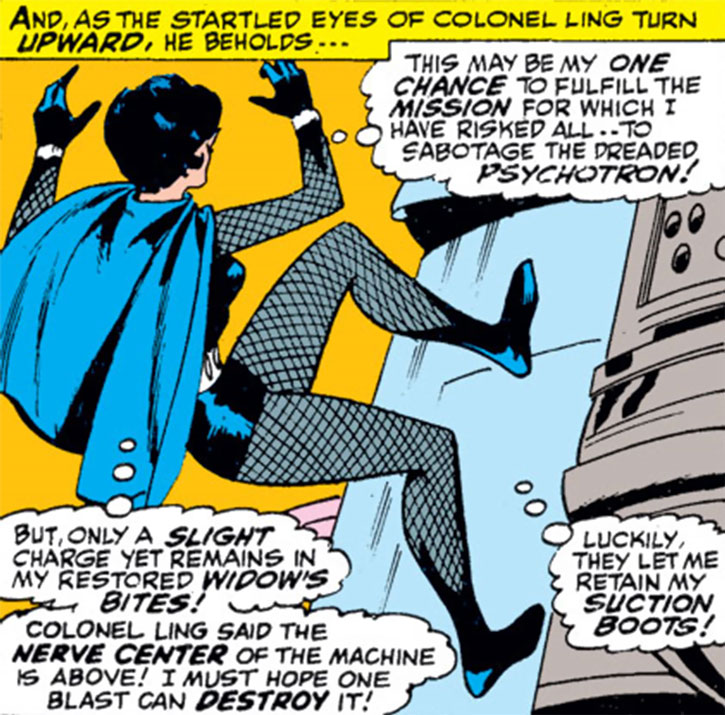 During this mission, Natalia discovered that Colonel Alexei Shostakov was still alive and had become the Red Guardian. She was repelled by the cruel, overbearing man he had become, and wished to have nothing to do with him. The Red Guardian was thought killed in the destruction of Colonel Ling’s base.

As she recovered from wounds suffered during this mission, Natalia decided to retire from her career as the Widow. She wanted to become Clint Barton (Hawkeye)’s wife.

However, as the months went by it became clear that they worked much better as lovers than as a couple. Barton had too much of a temper and Romanova wanted too much attention, resulting in verbal fights. Romanova renewed her ties with S.H.I.E.L.D. and resumed working with Fury and Dugan.

A she prepared for an unrevealed mission she was exposed to a new nerve gas, presumably to mithridate her. 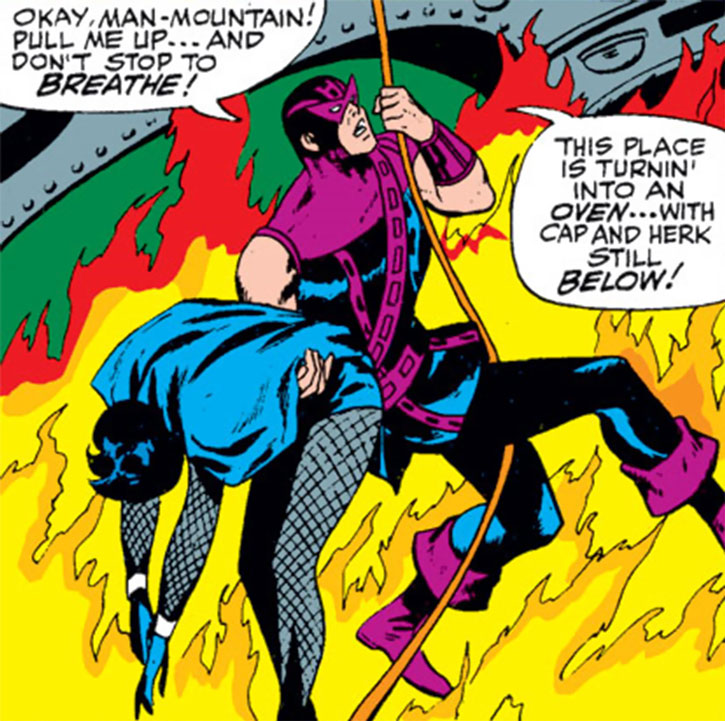 The Widow was next seen sneaking into a secret base of the Mad Thinker, where she successfully sabotaged the Man-Slayer robot as it was about to kill Captain Marvel (Mar-Vell). Other androids of the Mad Thinker captured her and gassed her unconscious.

How she escaped is unrevealed, but perhaps it was the same gas that S.H.I.E.L.D. had her develop a tolerance to – and she was playing possum.

The Widow next infiltrated Egghead’s base, disguised as a cleaning lady. Though she was detected and captured, she contacted the Avengers using a concealed radio and Clint Barton responded, using one of Dr. Pym’s serum to become the new Goliath.

Goliath narrowly got the Widow out of Egghead’s base, and the Avengers foiled the cranially peculiar scientist’s plot. 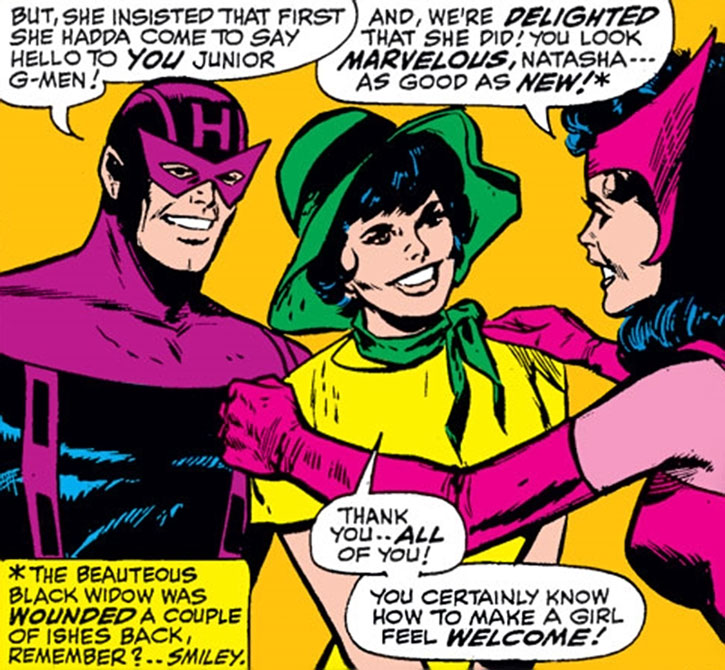 After she recovered, the Widow disappeared for several weeks. She then popped up in Avengers’ Mansion, confronted Barton and dramatically announced that they would never see each other again. When Barton dared her to say that she never loved him, she did.

(It is probable that this scene was intended to start a subplot – if so it was never published.)

Natalya Romanova wanted to make a clean break from her whole past. She felt haunted and guilt-ridden over her past and over seeing Alexei Shostakov die a second time. For months she lived as a glamorous jet-setter, presumably spending her S.H.I.E.L.D. mission bonuses to resume her “Madam Natasha” fame and life style. 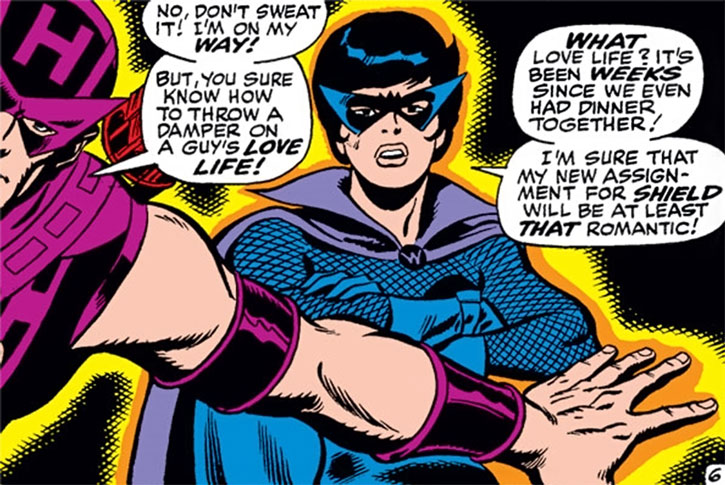 However, this did not work – she felt increasingly dissatisfied. She realised that adventure and danger were what allowed her to forget her past and perhaps make amends for it. Since she did not want to resume being the old Black Widow she drew new costume ideas, eventually designing her iconic look with the featureless dark blue body glove.

She also changed her hair style and resumed her natural dark red colour, though she kept the “Black Widow” name.

During the Spring of 1970, she resumed training and practicing to prepare for her return.

During this era her hair still looks black. The Black Widow costume is actually a small wardrobe with a number of differently-coloured body stockings, capes, masks, various jewels, etc.

One set of earring includes a “B”-shaped one and a “W”-shaped one, and the cape’s clasp seems reversible with a “B” on one side and a “W” on the other.

The mask is patterned after Hawkeye’s, since the costume was intended to be worn as his partner in crime.

The Widow’s body type seems at that point patterned after the 1960s ideal, with a tiny waist contrasting with lots of curves, and doe eyes.

The Widow is adventurous and passionate.

In the field she’s mostly about stealth, though. She slips around undetected, looking for a good opportunity to do something decisive and staying in reserve. Several of her saving-the-day stunts have relied on her willingness to shoot people, if possible by surprise, and making clear that she thought nothing of killing if necessary.

At this point Natasha still thinks that she’s always been a dancer and the housewife of an important, dashing man. Her being a spy has been a short and very atypical period of her life as she remembers it. She wants to go back to this by being Hawkeye’s girlfriend and an occasional Avenger, a bit like a part-time Wasp.

In her private life she retains the glamorous woman-of-leisure tastes and attitude. She seems somewhat difficult to live with as she demands exclusive attention. She wants to rebuild her life with Clint Barton and be a good early 1960s American fiancée, thinking and acting in a socially acceptable way.

She also wants to make it extra clear that she’s now a loyal American and a Cold War patriot.

Yet, something is stirring underneath. She needs action and danger to lose herself in. The death of Alexei and a small feeling of logical disconnect about it are also gnawing at her. This will grow into a feeling that something is wrong and that she needs to be by herself and reevaluate her life.

She also feels bad about her past as a spy and experiences a need to atone. However she doesn’t know yet about much of her real career as a spook and killer.

Widow: “When you love someone… can you not recognize her even when she’s masked ?”
Hawkeye: “Natasha !! Then it is you, my darling ! You’ve returned to me at last !”
Widow: “I had to come back… to see you once more ! To feel your strong arms around me !”

“My feelings for you have never changed — and they never will ! It is you who have lost faith in me ! But I am here to prove I can be trusted — to help you — and the Avengers !”

“Look into my eyes, Ixar ! Look deep into the eyes of the Black Widow ! Are these the eyes of one who deals in empty words… and idle threats ? So make your decision… at once !”

“As I told you then, Colonel, I will do anything which will show that I am no longer your country’s enemy – but a loyal citizen !”

“Few things can remain hidden from a master spy !” 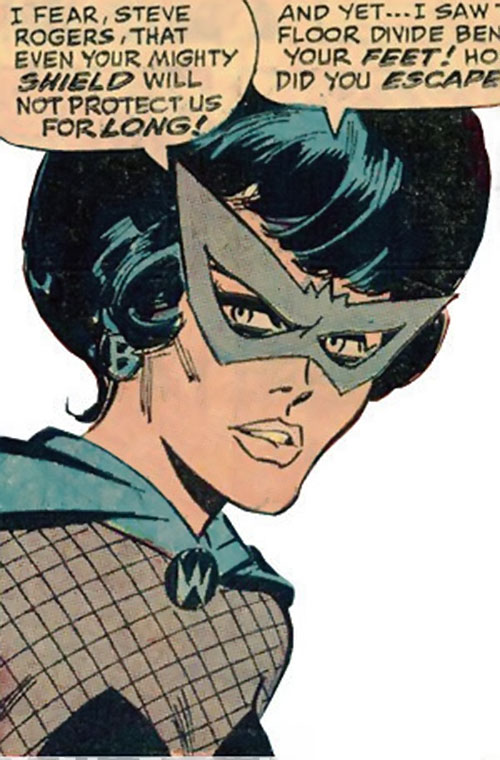 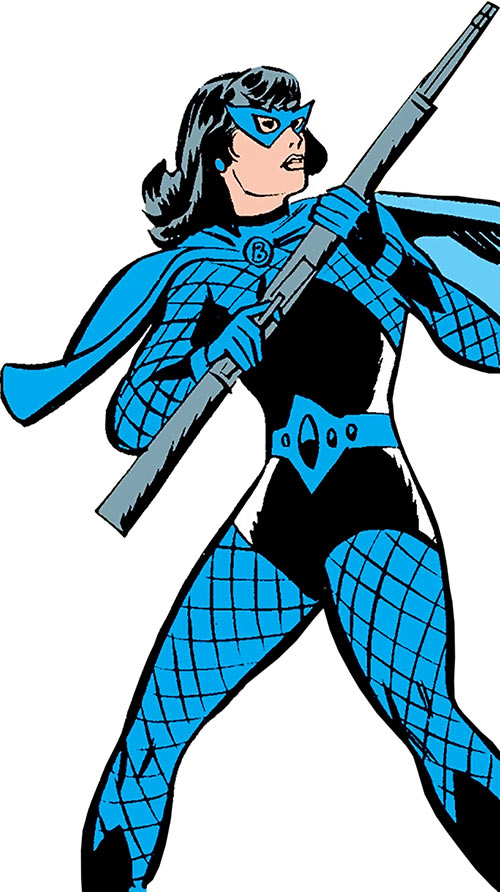 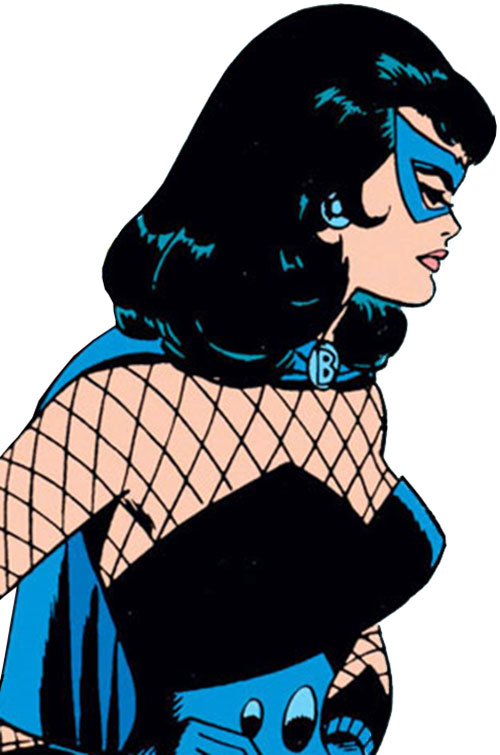 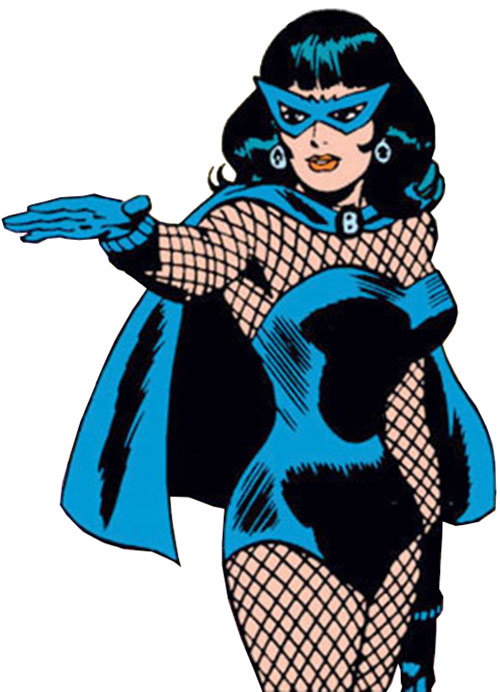 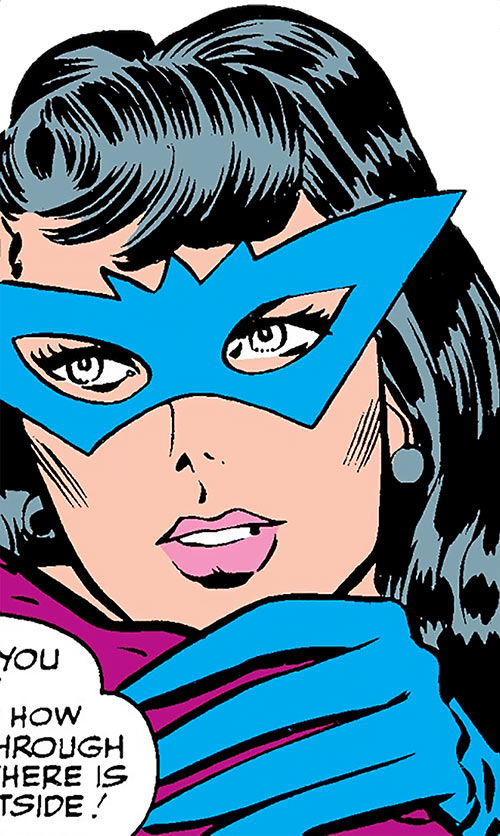 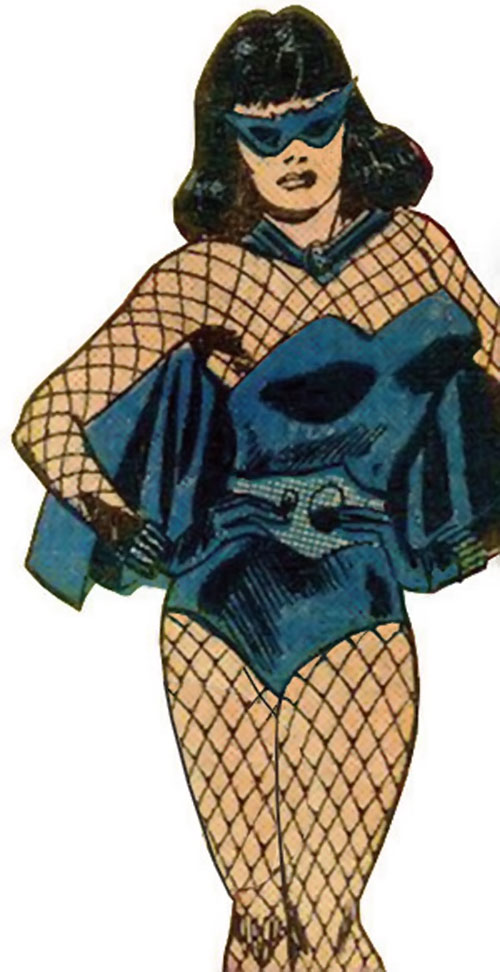 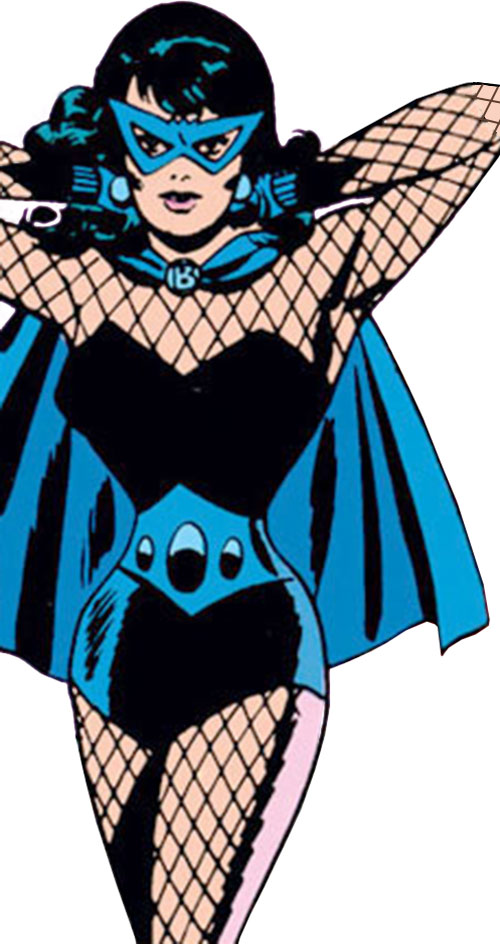 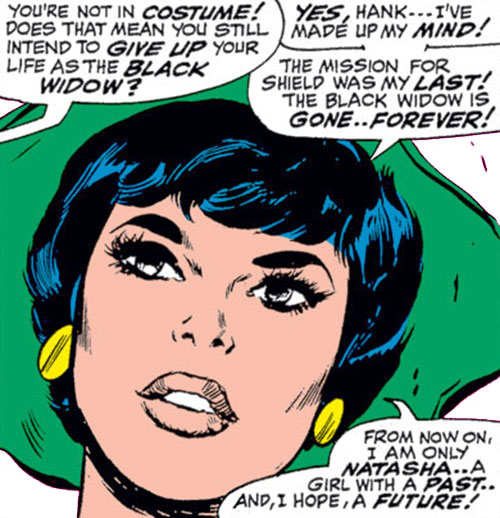 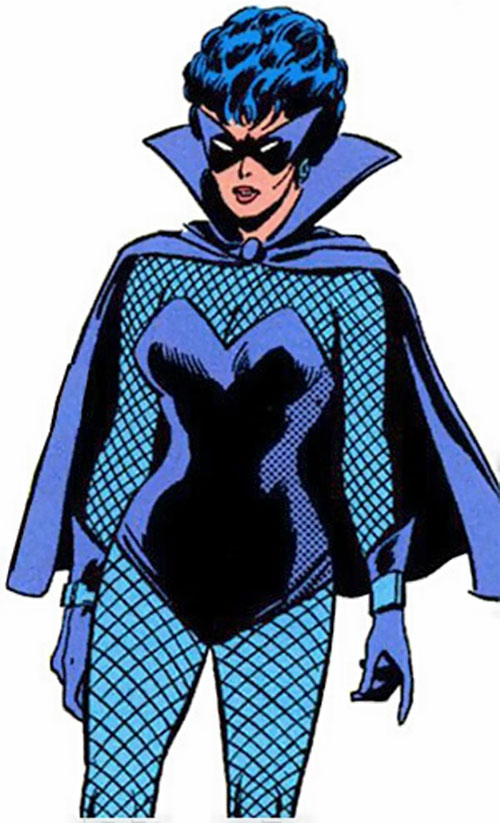 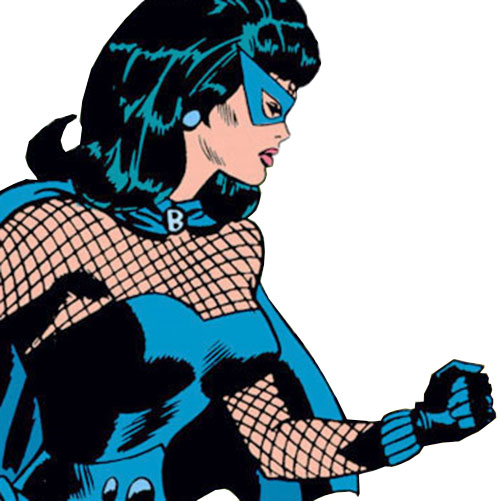 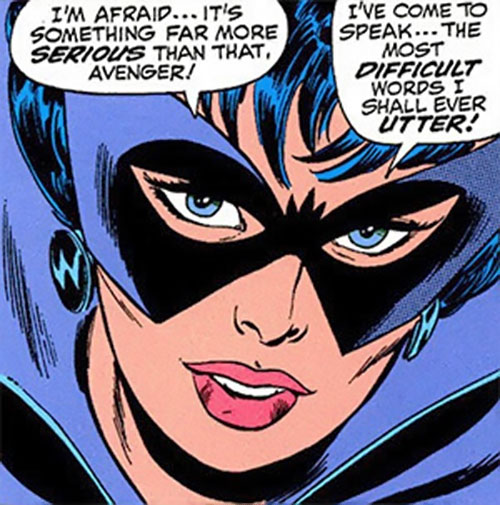 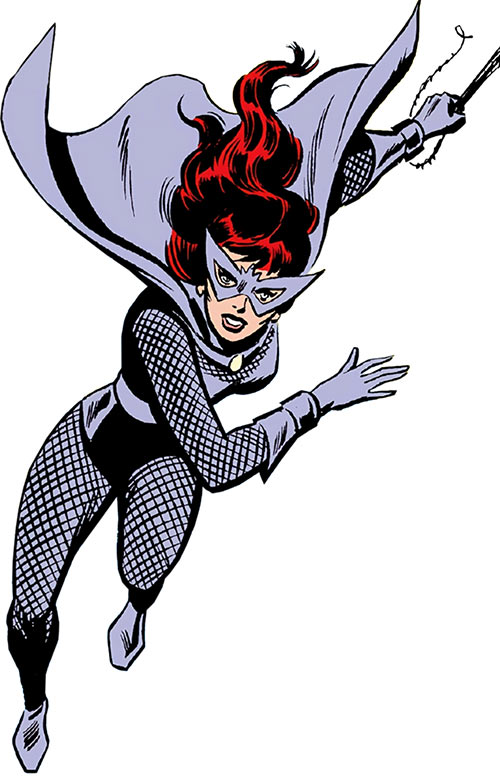 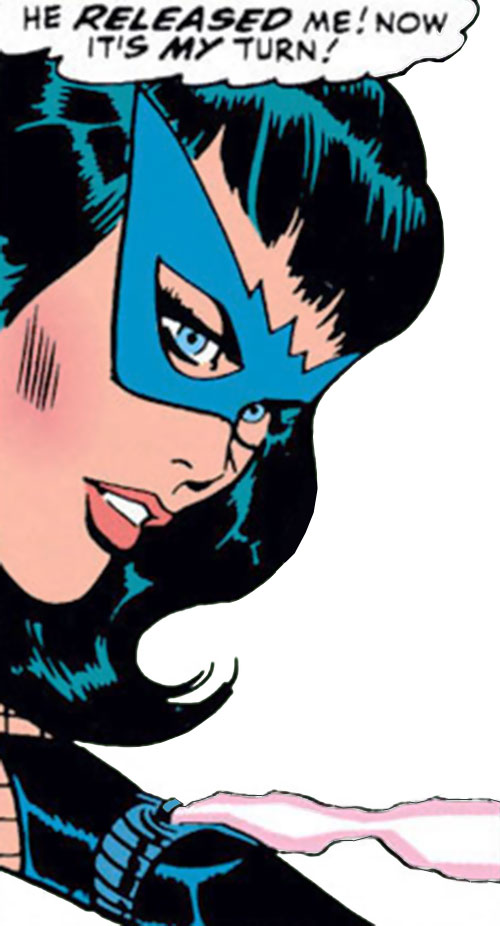 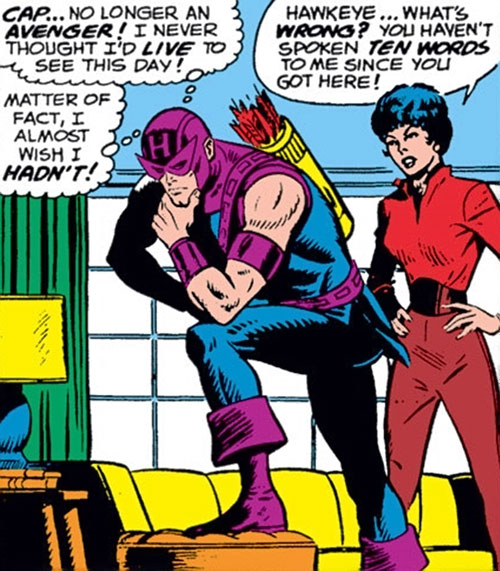 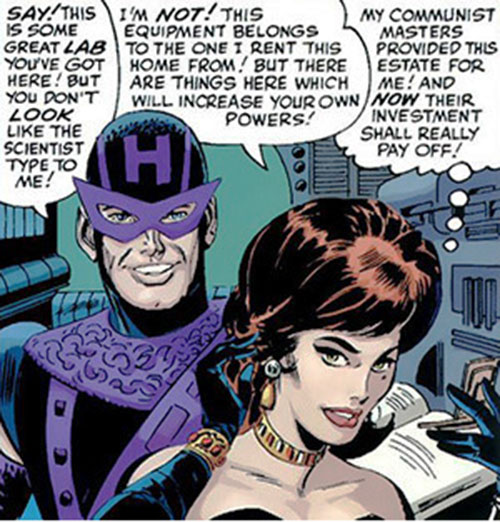 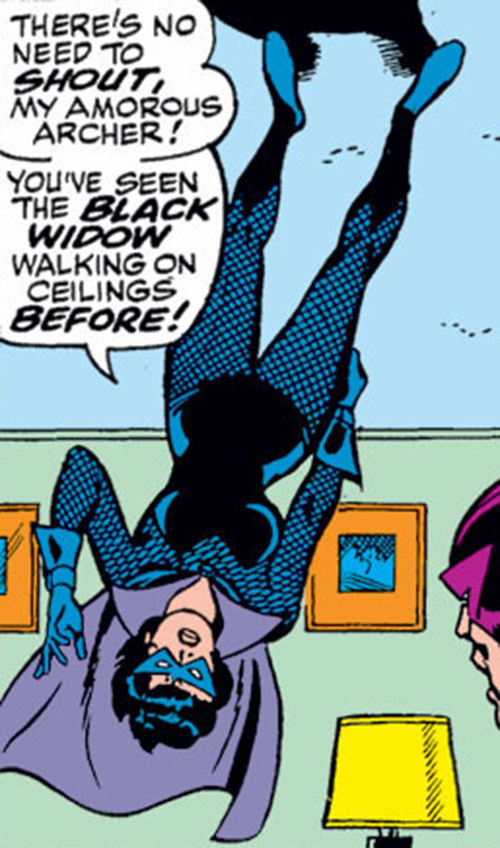 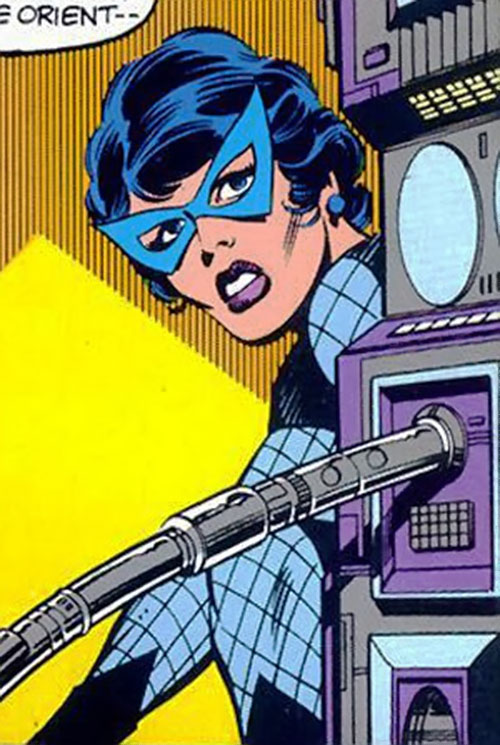 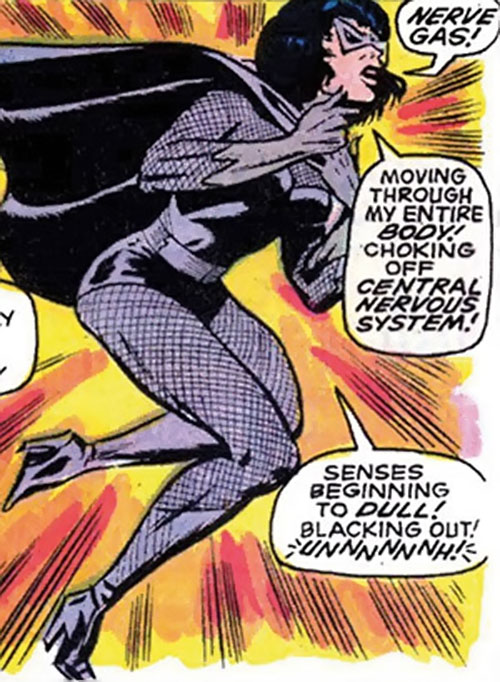 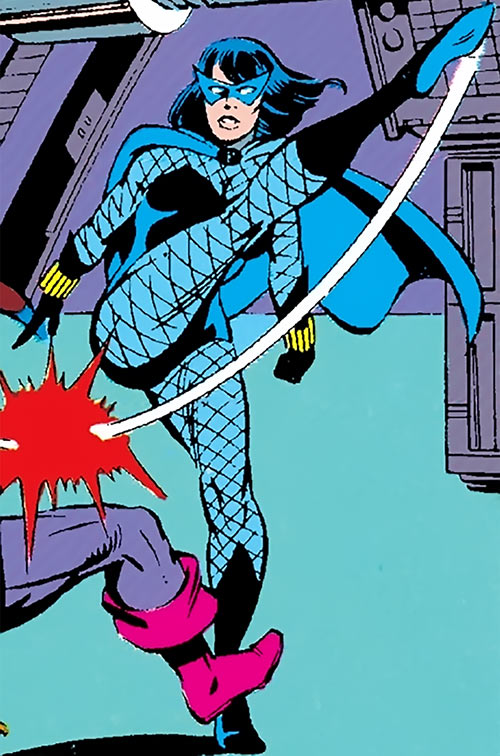 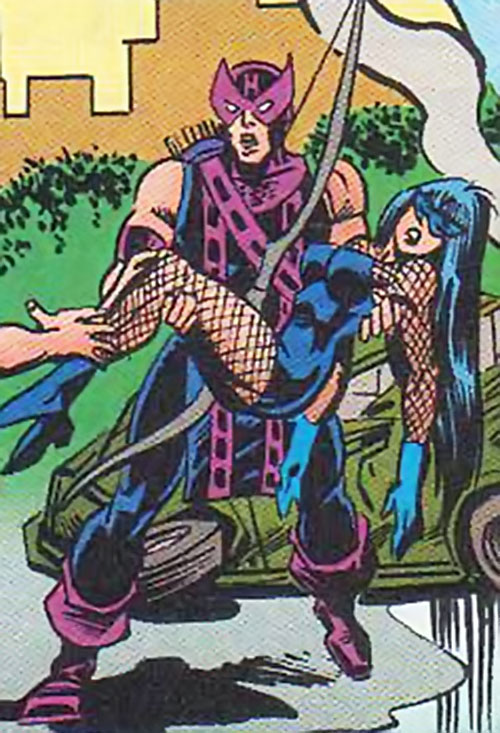