Gretchen Zeller is an obscure 1940s Marvel Comics character. She appeared in a 2006 Captain America storyline about Bucky.

She can be useful for WW2 stories in Europe. She might have been a Nazi hunter during the 1950s. And she’s one of the few German characters in US comics who ain’t a Nazi.

Gretchen Zeller was a capable amateur spy, with considerable courage.

She was also fluent in English.

She likely had some skills in first aid, and could operate 1940s radio equipment.

Fräulein Zeller was a proficient handgun operator. She was usually armed with a 9x19mm Pistole 08 (“Luger”) and carried extra mags. 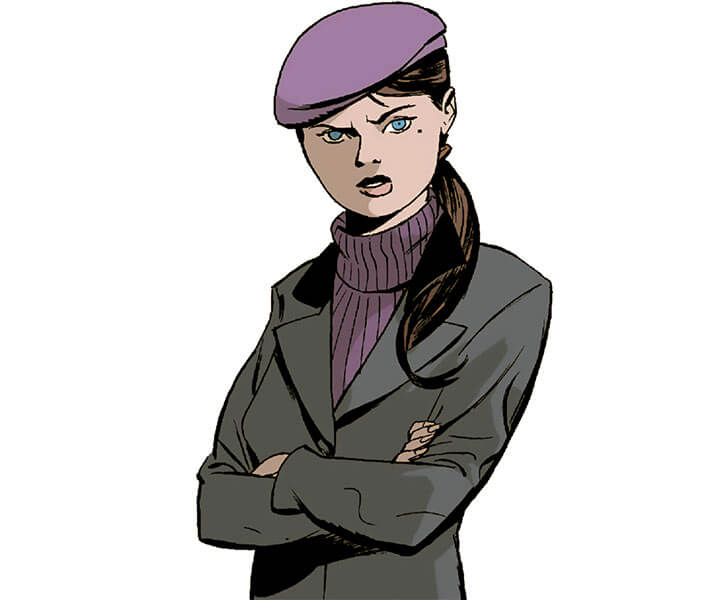 During the 1930s, Dr. Richard Zeller created a small anti-Nazi movement in his village of Eisendorf.

He and his daughter Gretchen (presumably born in 1924) considered themselves true German patriots. They bitterly opposed the NSDAP in power.

(Eisendorf seems to be an Alpine village. I would thus imagine that it’s in Bavaria. Which would arguably makes her trilingual because c’mon, that *accent*.)

Drink before the war

During the war, most members of this cell were arrested. By April of 1944, only the Zellers were left.

But they continued to gather intelligence. In particular, Herr Doktor Zeller spoke with unsuspecting wounded Nazi troopers. Gretchen would then radio his findings to British intelligence.

Allied intelligence codenamed this source “Blackbird”. It is thus possible that Gretchen went by “Amsel” if there were contacts with other anti-Nazi Germans.

(The Zellers didn’t seem to be Communists. And there weren’t religious symbols in their house. So I’d imagine that they had little contacts with the other anti-Nazi efforts in Germany.) 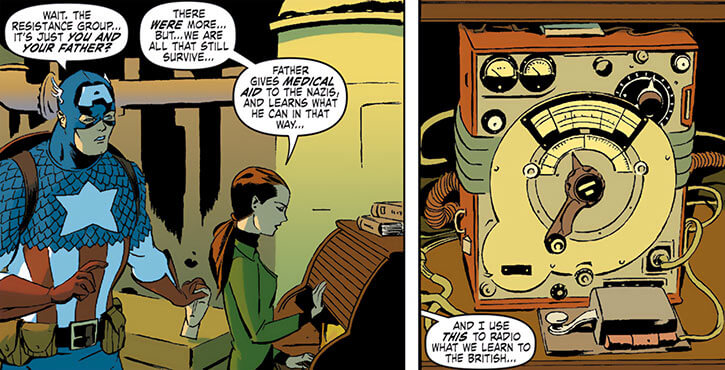 You will meet a short, colourful stranger

In April of 1944, the Red Skull (Johann Shmidt) and SS troops came to Eisendorf. They were urgently investigating an old castle there.

After Blackbird warned them, the Allies parachuted a commando to foil the Skull. However, Frl. Zeller did not mention that only two Resistance members were left.

Captain America (Steve Rogers) and Bucky (James Barnes) were backed by Nick Fury and his Howling Commandos. However, as they reached Eisendorf, they clashed with a patrol. Bucky was seriously wounded.

After Dr. Zeller got the bullets out of Bucky, the Allied operatives gathered intel. As part of this Gretchen went to the condemned municipal library to find archives about the castle. While he could barely walk, Bucky refused to let her go alone.

(He was totally sweet on her.)

During the next phase of the op, Blackbird and Bucky raided a local jail. They killed several Nazi soldiers and freed an academic, Herr Dexx. Dexx had been forced into working for the Skull.

Once freed, Dexx volunteered crucial information. This allowed Captain America to defeat the strange giant war robot the Skull was unearthing under the castle.

Mr. Barnes and Frl. Zeller had grown fond of each other. They kissed before Bucky had to leave.

Bucky was determined to return to Eisendorf as soon the war would be over.

However, in 1945 he was seemingly killed while neutralizing one of Baron Zemo’s missiles.

Dr. Zeller was also executed by the Nazis before the war was over. Gretchen may have been forced to flee and live in hiding after that.

During the late 1940s, Gretchen Zeller emigrated to the US. She ended up in a small Iowan town, perhaps to see relatives. She eventually married a local, and they ran the inn.

(I’d imagine that the patriotic and staunchly anti-Nazi Blackbird reacted poorly to how denazification took place. It is entirely possible that the men who arrested and executed her dad remained in place after the war.)

(She may also have been able to call markers within the OSS to obtain transportation and naturalisation.)

Gretchen had a daughter during the 1950s.

Once he was freed from his Winter Soldier conditioning, “Bucky” Barnes remembered about Blackbird. However, tracking her down was difficult.

Still, in 2006 he discovered that Mrs. Tolin of Pilsburg, IA, was Gretchen. He could thus visit her grave. 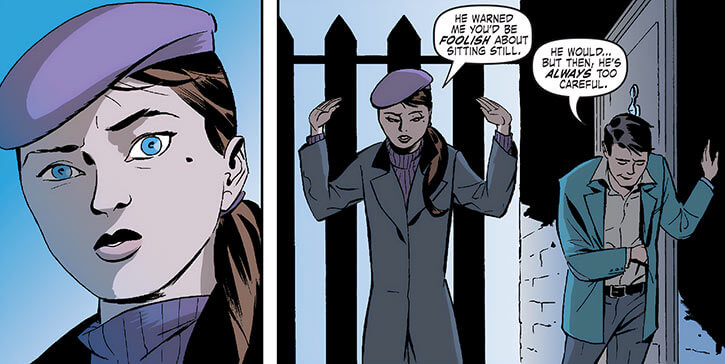 Gretchen was usually dressed in conservative 1930s clothing. Since getting newer clothes in the arse end of Bavaria during the war wasn’t trivial. She seemed fond of purple.

A courageous, collected Resistance member. She hated the Nazis’ guts. She and her dad were entirely willing to die in opposing them.

She was quite fond of Bucky. Who was adorable both when he was too shy to sweet-talk her, and when he was going all James Cagney  to impress her. Though she didn’t react well when he tried to keep her out of a fight.

(With affectionate sarcasm, after Bucky makes a chivalrous tough guy mini-speech even though he can barely stand) “My great American hero… shall I hold you up while you save me from the Nazis, too ?”

Medicine isn’t demonstrated, but seems reasonable as the daughter of a physician.

I wouldn’t be amazed if she had Animal Handling (Horses): 03 and other skills fitting rural Central Europe during the 1940s.

In the US she presumably acquired Familiarity (Small Business Management).