He’s chiefly notable for having appeared in Booster Gold #1 (1986). Which I’m sure Booster would insist is a valuable collectible.

He’s very simple to use in a story. Which is good.

Blackguard is big and strong, with adequate close combat skills.

He can generate solid energy to create a mace, hammer or flail in one hand – and a shield in the other. Those can withstand and deliver superhuman blows, but are electrically conductive.

Blackguard also wears a suit of high-tech, bulky body armour. Its exoskeleton  greatly amplifies his strength – to “Class 25” or so.

King Faraday once stated that the power stemmed from the armour and not the man. This contradicts previous accounts. Perhaps he meant that the armour helps with the stability of the solid energy construct ? Or some other No-Prize HypothesisA made-up explanation to plug a plot hole. 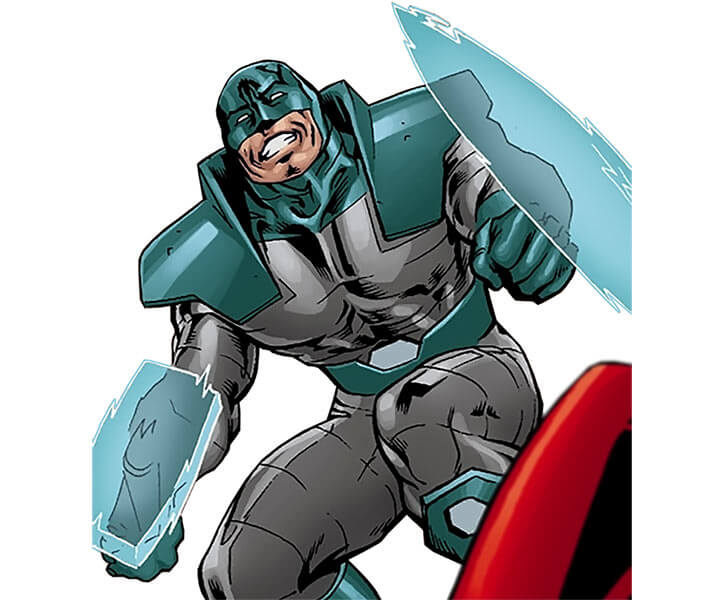 The Blackguard armour during the late 2000s.

During the 1980s Mr. Hertz was hired, empowered and outfitted by the conspiracy called The 1,000.

Presumably, he already had a criminal career as a thug before they hired him.

In 1986, Blackguard accompanied troops to steal satellite tech from S.T.A.R. Labs. Howbeit, their vehicle was intercepted on the way home by the brand new (and I do mean “brand”) hero Booster Gold (Michael Carter).

Blackguard didn’t fare badly, thanks to his power armourStrength-enhancing body armour, like Iron Man’s. However, Booster tricked him into hitting a power terminal. This shocked Hertz unconscious.

This was not Blackguard’s first failure. Therefore, the 1,000’s Director decided to have him disciplined. He sent in a more competent enforcer, Mindancer, who busted Blackguard out of prison.

When the Director advised Blackguard that they were unhappy with his performance, Hertz got violent. But he was knocked out. His employer decided to execute him, along with the recently-captured Booster Gold.

Metropolis vigilante the Thorn (Rhosyn “Rose” Forrest) rescued them. Blackguard prepared to fight along with Booster and the Thorn – but Mindancer took over his mind.

However, the mesmerised Blackguard was sluggish and devoid of initiative. He was thus defeated by Skeet, Booster Gold’s robot sidekick.

Apparently, Hertz recovered his free will when he woke up, and fled.

In 1995, the demonic lord Neron offered FaustianMaking a deal with the Devil, like literary character Faust did deals to many villains throughout the DC Universe.

Blackguard apparently asked not to be stupid anymore. He was granted what seemed to be at least average intellect.

As part of his service to the Hell-lord, Blackguard was teamed up with Earthworm (Herbert Hynde) and Cheetah (Barbara Minerva). They were to occupy Warrior’s, Guy Gardner’s superhumans-themed bar.

During the clash Blackguard was seemingly incinerated by Guy Gardner. Who, at that point, was in an altered psychological state.

(The events in this section occurred during the mid-2000s. This span of Justice League Classified is usually called the “Super-Buddies era”).

(There’s confusion about when the Super-Buddies material occurs. On this matter I firmly stand with the people who don’t know. And let’s not even mention the issue of Guy’s ring. I’ve assumed for this writeup that said events actually occur in 2003, as per P. Svensson  ’s advice.)

When Blackguard was seen years later, he was alive and unburned. But his Neron-improved intellect was clearly gone. 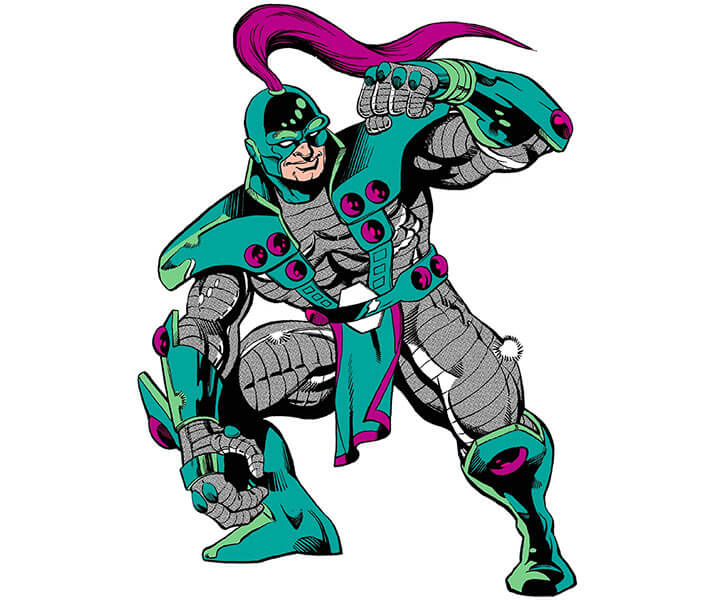 The Blackguard armour during the 1980s.

He had done his time in prison. Hertz was apparently fully reformed, and received excellent recommendations from his parole officer.

He was also on friendly terms with Guy Gardner (perhaps after exchanging letters while he was in prison). Thus, they decided to open a bar together.

The dive, situated next to the office of the “Super Buddies” in Queens was named the Dark Side. The name came from a previous supervillains bar, but there’s no relation with the Dark Side Club that opened years later in Metropolis.

And then… and then…

What happened next is unrevealed. The whole Super-Buddies thing disappeared into comic book limboWhen a character still exists, but hasn’t appeared in comics for years.

Hertz apparently relapsed into crime, and was arrested.

He was thrown into the Belle Reve prison in Louisiana – seemingly for years.

When Amanda “the Wall” Waller was dismissed from the modern version of Checkmate, she continued operating her Suicide Squad. She showed an interest in Blackguard as a member.

After some training and tests, he was assigned to a slash-and-burn mission at the corporate headquarters of Haake-Bruton. This company had weaponized a deadly virus. Said virus could easily trigger an extinction-level pandemic.

On this op Blackguard was part of the heavy squad, along with Marauder, White Dragon (William Heller) and the General (Wade Eiling). They were to dispose of guards wearing replicas of the cybernetic Carapax armour.

During the operation, part of the team betrayed the rest. Blackguard was beheaded by the General.

Richard Hertz might be dead. On the other hand – he has been reduced to a charred skeleton before.

Furthermore the armour is likely in the hands of the US government. And Hertz’s powers had been artificially bestowed in the first place.

Thus, having a new Blackguard emerge in your campaign would be trivial. 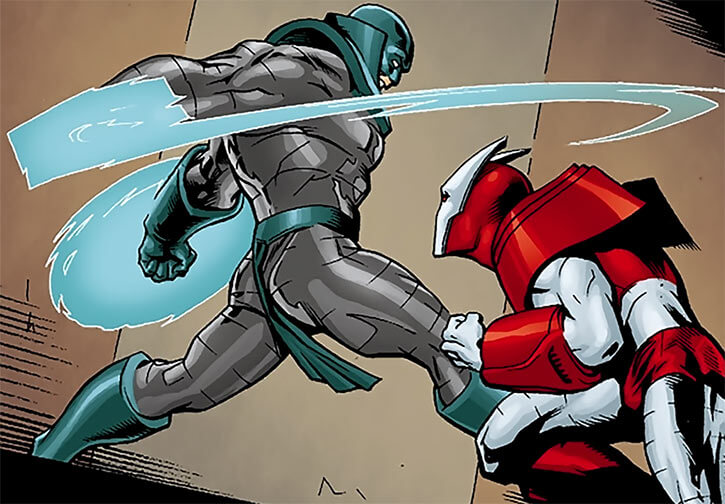 A boisterous thug, too confident in his brawn and too proud for his own good.

He’s not too bright either. In fact he’s downright dumb. This seemed alleviated while the deal with Neron was in effect.

After he reforms and becomes just Richard Hertz, he’s a fairly genial blue-collar type. Hertz is noticeably (though not ridiculously) non-violent and non-confrontational… and still thick as a plank.

He prefers for people to call him “Dick” when he’s not Blackguard. He’s utterly oblivious to the fact that “Dick Hertz” is a notoriously bad combo.

(Facing Booster Gold) “Yer gonna lose more than that, babyface ! I’m Blackguard, squirt ! And, as of now, you are a dead man !” 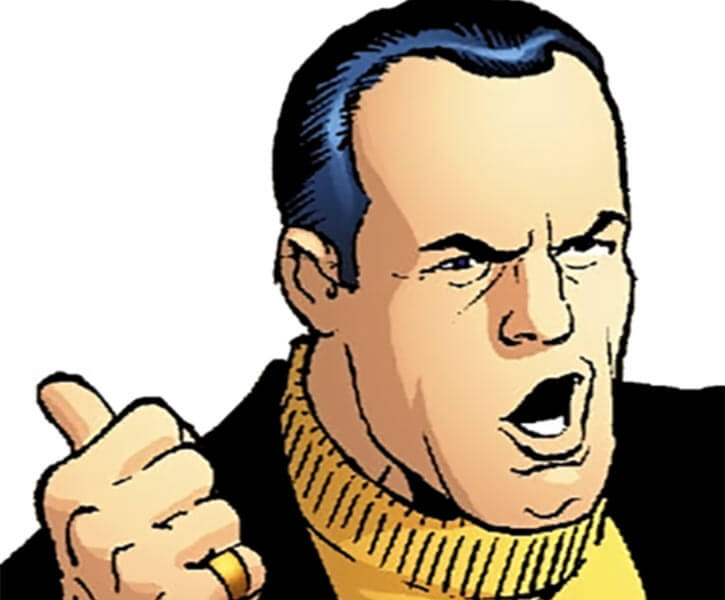 BLACKGUARD ARMOUR [/STR/ 10 /BODY/ 09, Energy absorption: 03, Growth: 01, Limitation: Growth is Always On and Already Factored In – the suit is quite large].

Blackguard was only briefly seen in his Neron-enhanced state.

My guess would be that his DEX, INT and WIL had been raised to 05 (with his Weaponry following suit), his INF and AUR were now 04, and he had a Minor Rage.

Those effects did not last long, though, unlike with some Neron-enhanced villains such as Blockbuster.

It is also *possible* that Blackguard asked for some form of immortality, or ability to survive a set number of mortal wounds.

This is purely speculative. But this would explain the continuity glitch with his seeming death at the hand of Warrior (Guy Gardner), and make it even more trivial to bring him back after his seeming death in Suicide Squad: Raise the Flag. 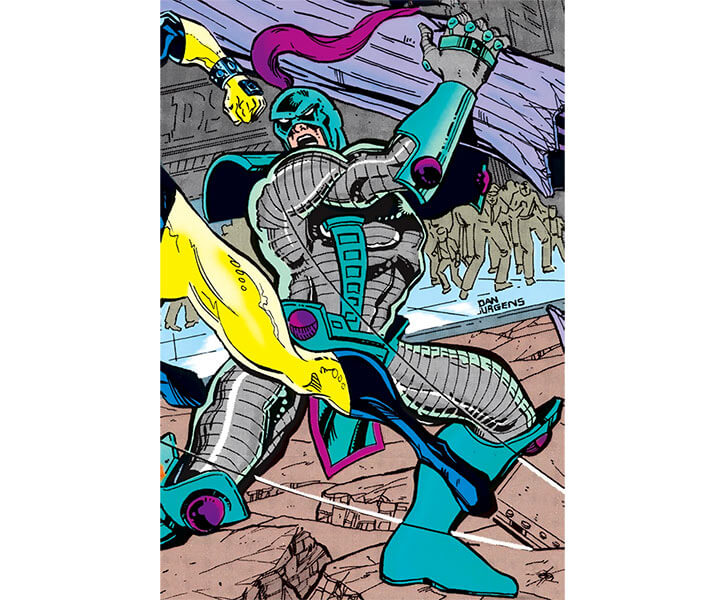 Blackguard was only briefly seen in his Neron-enhanced state.

My guess would be that his FGT/INT/AWE/PRE were all raised by one Rank, he had two more Ranks in some Skills (Insight, Perception, Expertise) and his Complication about intelligence was replaced by one about bloodlust.

It is also *possible* that Blackguard asked for some form of immortality. Or perhaps the ability to survive a set number of mortal wounds.

This is purely speculative. But this would explain the continuity glitch with his seeming death at the hand of Warrior (Guy Gardner), and make it even more trivial to bring him back after his seeming death in Suicide Squad: Raise the Flag.