When he reappears in the mid-2000s, Blackout II no longer uses the character sheet  he had in the mid-1990s – which is covered in our second Blackout II profile. The reasons for these differences are unrevealed.

A good part of the divergence is caused by different writing conventions. Blackout’s more recent appearances are almost all stories where villains are ineffectual, or even buffoonish. One could thus argue for — in DC Heroes RPG terms — Genre differences.

But in the end what counts is that the readers of these appearances have a different view of Blackout’s abilities than did 1990s Ghost Rider readers.

Compared to before Blackout is markedly slower, less agile and less of a hand-to-hand combat expert. He seems considerably stronger, yet his durability has not improved. One exception of his vulnerability toward sunlight, which has fallen to the wayside.

Blackout now has few Hero Points . Being overconfident he tends not to spend them anyway. But on the other hand, this means that they’re available for fleeing, making him good at escaping.

In 2005, Blackout was among the numerous villains who escaped when Electro blew up part of the Raft prison. He laid low for a while, but was approached by the Hood (Robin Parker). Blackout agreed to join his gang, though he was wary at first.

His former employer, Deathwatch, was also a member. They apparently patched their differences, as they worked together. Blackout took part to the 2007 assault on Doctor Strange’s Sanctum Sanctorum, which narrowly failed to take out the Avengers. 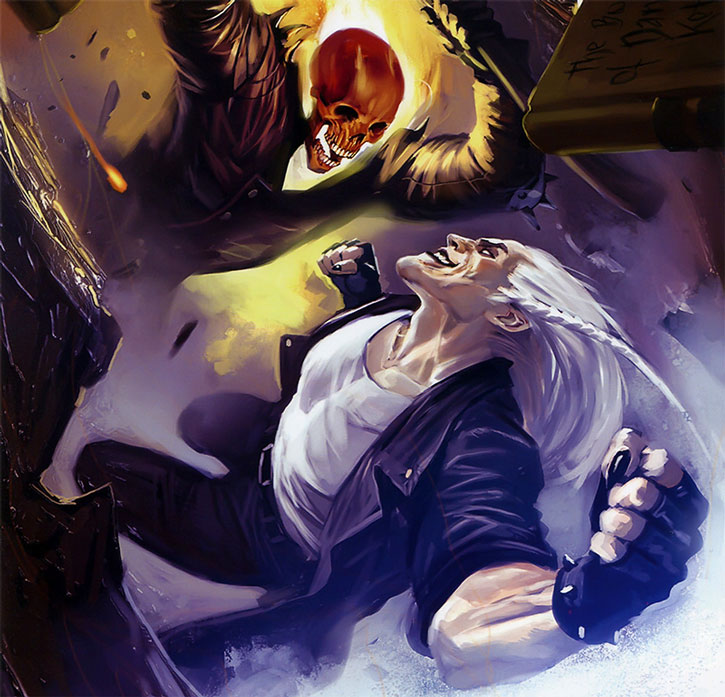 In 2008, Blackout was hired by Dan Ketch – along with the Death Ninja, the Orb and Doghead. At that point, Ketch was investigating the source of the Rider’s powers. Ketch needed to have the mysterious Caretaker taken down, and sent his mercenaries in.

Blackout, amused by the situation, was the one who managed to take Caretaker down. However, he suffered a nasty sword thrust to the crotch in so doing. When Johnny Blaze arrived on the scene, Blackout decided to attack, but the original Ghost Rider took him out. Blackout swiftly recuperated and returned to New York City.

Blackout was among the Hood gang members who discovered the infiltration of S.H.I.E.L.D. and other organisations by Skrulls. The Hood kept his gang in reserve during the Secret Invasion . But in its aftermath negotiated a deal with Norman Osborn, who as a hero of the war against the Skrulls had become the commander of much of the US’s security apparatus.

Osborn soon gave the Hood and his gang another go at the Avengers, but their assault was foiled by Ms. Marvel.

Blackout stuck with Dr. Jonas Harrow during his brief takeover of the Hood’s gang. He then resumed working for the Hood when he regained control. When Osborn attacked Asgard, the Hood was called to reinforce on and he went in with his older recruits, the “Brooklyn crew”. This included Blackout.

Blackout fought against the Asgardians, his power reinforced by the magic of the Norn Stones. Said magic may have been what allowed him to ignore the sunlight during the lengthy battle. Loki eventually withdrew the Norn Stones enchantments, but it would seem that Blackout was one of the Hood’s men who nevertheless managed to flee.

Teh Deacon was a fearsome fanatic empowered by the dark angel Zadkiel to hunt down the Ghost Rider. He recruited Blackout both for his enmity with the Rider and his underworld contacts. The latter allowed the Deacon to recruit more mercenaries to take the Rider down. 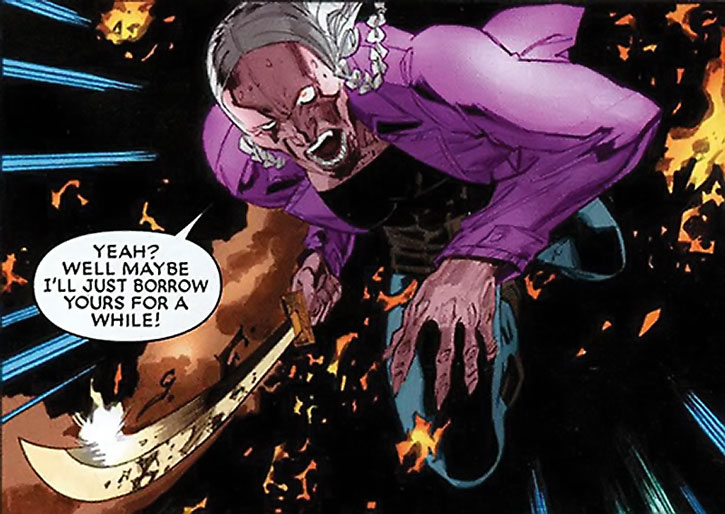 Blackout picked the new Orb, Vengeance (Deputy Kowalski), Big Wheel, Trull the Mighty, Madcap and the Scarecrow. But as it turned out the Riders had more, and more powerful allies than he expected. The attacks failed.

During this engagement, Blackout ambushed a squad of heavily-armed nuns guarding a gate to Heaven the Riders had come to cross. Though he expected a easy slaughter thanks to his darkness powers, the nuns opened up with massed fire. The Lilin took several hits with hollow-point bullets filled with actual holy water, forcing him to flee.

In 2011, during the Fear Itself crisis , Blackout allied again with Deathwatch, staying in vicinity of Skadi (Sinthea Shmidt). This provided amusement for Blackout, and considerable power the Deathwatch, who absorbed the abundant death energy.

When a Ghost Rider came for them, they were confident. But as it turned out it was a new Ghost Rider (Alejandra) which was much more powerful than her predecessors. Blackout and Deathwatch were felled by a sort of Penance Stare before they could meaningfully react.

His features gradually recovered their integrity over this era. During the late 2000s Blackout randomly took to wearing a top hat, and stuck with it since it works on him.

Blackout still sees himself as a classy, stylish, deadly assassin but in practice he’s just a bruiser with a darkness schtick and long underworld experience. 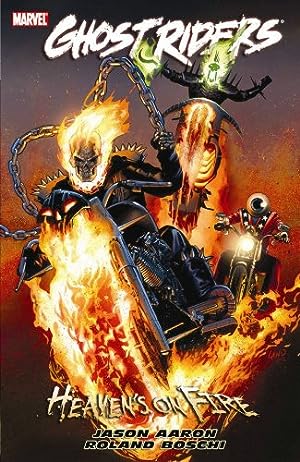 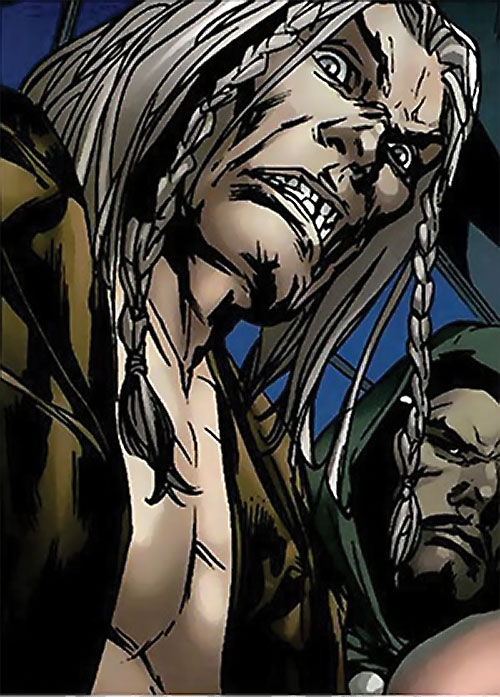 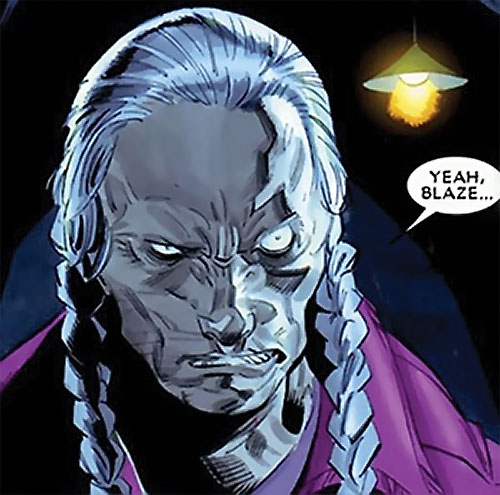 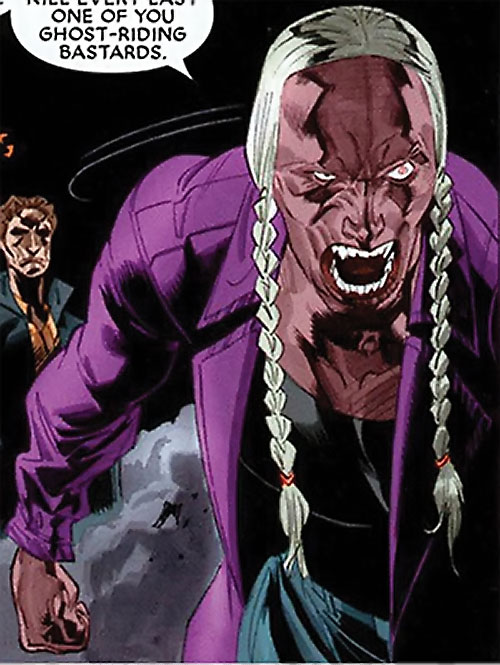 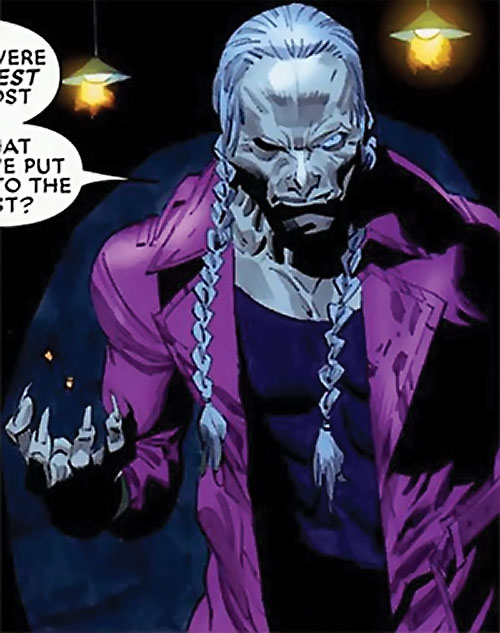