Blackout can open portals into the Darkforce  Dimension . And he can control the Darkforce matter which comes out of it, for such effects as:

The portals also allow him access to the Darkforce Dimension. This allows him to travel vast distances (such as from the Earth to the Moon), or to banish his enemies there.

When he first appeared, he believed his powers to be some form of light control. Thus, when he banished people to the Darkforce Dimension he believed he was turning them into black light, their atoms merging with the colour spectrum. At this point his energy blasts could be made invisible.

There have been two differing accounts of the events that gave Daniels his powers. Both were related by Daniels. But given his deteriorating mental state the truth could be one of these, parts of each, or neither.

What is known for certain is that Marcus Daniels was a laboratory assistant to physicist Dr. Abner Croit.

The first origin has it that Croit was working on a device to harness the power of a black star. When the honest Daniels discovered Croit was defrauding his government backers, he went straight to the police.

Unfortunately Croit framed Daniels. Daniels later claimed that Croit had bribed the DA and the judge, but this was during his paranoid period, so this was unsubstantiated. The assistant was threatened with prison if he didn’t act as a guinea pig for Croit’s experiments. Daniels reluctantly agreed.

Exposure to energies from the black star changed Daniels. For three days he had to remain isolated, the energies proving dangerous to anyone around him. Unwilling to let Croit control his power, Daniels fled the laboratory.

The second origin has Croit as a kindly man who took pity on the unfortunate Daniels. He offered him a job as an assistant, and always helped him out of troubles with the law. 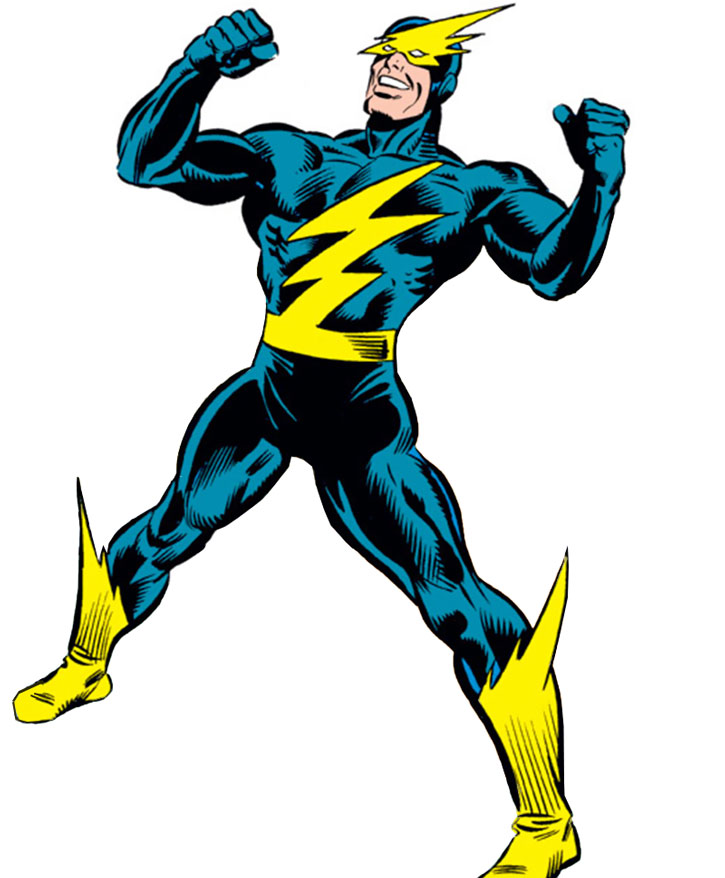 In this origin Croit was building an experimental device to try using another dimension as a power source. The dimension in question was the Darkforce Dimension. However, a lab accident empowered Daniels as a conduit to this dimension.

Croit worried about the damage this could do to Daniels, and tried to cure him. But Daniels decided he liked his newfound power. Fed up with what he saw as Croit’s condescension, he fled.

Whatever the truth, Daniels eventually realized his powers were becoming uncontrollable. Adopting the Blackout identity, he returned to confront Croit. His goal was to take the stabilizer which would allow him to control the energies.

On his way to Croit’s laboratory he spotted Nova (Richard Rider) flying over Manhattan. In his growing paranoia, Daniels believed the hero was searching for him. He attacked Nova. After realising his error, he left the young hero in a block of sticky darkforce, continuing on to Croit’s laboratory.

Breaking into the lab, he retrieved the stabilizer and confronted Croit and his new assistant. He “merged their atoms with the colour spectrum” (actually banishing them to the Darkforce Dimension). He then used his now-controlled powers to create unnaturally harsh weather over New York.

Blackout was discovered by Nova, and the two fought again. When the stabilizer was destroyed in the battle, Blackout again lost control of his powers, and found himself following Croit.

The stabilizer ended up at Project: PEGASUS. Vibrations from an earthquake reactivated the stabilizer. Then the proximity of Captain Marvel’s energy form passing nearby triggered it, allowing Blackout to return.

Fellow prisoner, Moonstone, convinced him to free her, plus other villains imprisoned there, Electro (Maxwell Dillon) and Rhino (Aleksei Sytsevich).

They were soon confronted by the Avengers and Spider-Man (Peter Parker). After causing damage to the Project’s nuclear reactor, Blackout and Moonstone escaped while the Avengers were busy averting a meltdown.

Moonstone took advantage of their freedom to work her way into Daniels’ confidence. She offered him therapy to overcome his problems, but actually manipulated him to be reliant on her. However, they were soon found by the Avengers. When Moonstone ordered Blackout to trap the Avengers within the Darkforce Dimension, he instead trapped himself and Moonstone.

The pair next appeared on the Moon. Moonstone was hoping to find another of the stones which empowered her. They hadn’t expected to find it inhabited, so were surprised to find the Inhumans’ city. The Inhumans were equally surprised when a cloud of darkness (which provided the pair oxygen, as well as concealing them) appeared near their home.

Unable to penetrate the cloud, the Inhumans sought aid from Dazzler. Working with Black Bolt, Dazzler managed to pierce Blackout’s darkness. Blackout and Moonstone fought back but were defeated, and returned to the custody of Project: PEGASUS.

When Moonstone was recruited into Zemo’s Masters of Evil, she asked for Blackout to also be released. She claimed that he could be instrumental in countering Captain Marvel (Monica Rambeau), the most powerful of the current line-up of Avengers. 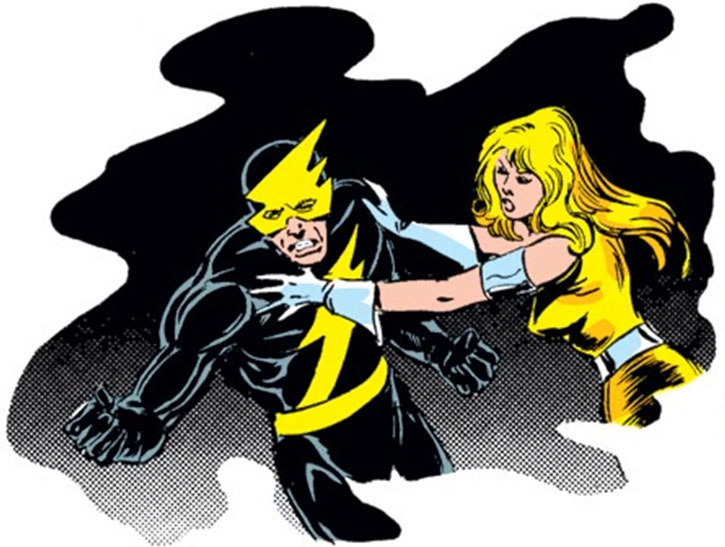 Zemo agreed, freeing Blackout. However, he was justifiably concerned about Moonstone being a threat to his leadership. Thus, he had the Fixer invent a device that made Blackout believe everything Zemo told him.

The Masters invaded and took control of Avengers Mansion. Blackout engulfed it in a block of solid darkforce. When the Avengers eventually retook it, Zemo ordered Blackout to send the entire mansion to the Darkforce Dimension. But Doctor Druid used his psychic abilities to help Blackout fend off Zemo’s control.

However the strain was too much, and Blackout suffered a massive brain hemorrhage.

Blackout’s body was kept alive by the authorities. Years later, when Zemo worked with the Commission on Superhuman Activities, he was given Blackout. The goal was to recover Atlas’ younger brother, the Smuggler, who was stranded in the Darkforce Dimension.

Zemo used the artificially animated Blackout when his group confronted the Thunderbolts over the life of their member, Photon. His disposition following this, and whether he is actually dead, in uncertain, but he probably returned to CSA custody.

Originally either an honest, law-abiding, citizen, or a bitter, resentful, thug.

But in either case, the energies that gave him his powers also affected his mind. He became increasingly paranoid.

After Moonstone worked to make him more reliant on her, he eventually became practically catatonic. He would react only to her commands, or to Zemo’s, once he gained control of Blackout.

That lasted until his mind was freed from their control by Doctor Druid. At this point he reverted to his highly paranoid mindset, even rejecting Druid’s suggestions.

“Why were you spying on me ? Were you sent to stop Blackout before I’ve accomplished my goals ?”

“The black star power you shot into me is still too powerful. If I don’t siphon some of it off with your stabilizer — if I can’t correct my body’s metabolism — the black light pulsations will rip me apart ! And my atoms will merge with the light spectrum ! I’ll be lost in the rainbow — forever ! But I have the stabilizer — and I can focus my excess energy into Manhattan — and cripple this city… making it ripe for plunder — while saving my life at the same time. A double coup, Croit. A double victory for Marcus Daniels — for Blackout !”

“You tried to stop me before. Wanted me locked away, like all the rest ! Now you’ll pay, yes !”

“Get away from me ! Get away ! You’re not my friend… you’re like all the others who imprisoned me ! You… you imprisoned my mind ! Yes ! But no more. No more !!”

Prior to joining the Masters of Evil his only drawback was his SPI.

Before becoming Blackout, he may have had Scientist: 02 (see History).[/special]