Blackstarr is a woman of great intelligence and foreboding presence, with a talents for words. More importantly, she is a scientific genius. She unlocked the Holy Grail of modern physics – the unified field theory .

This untold leap forward in physics theory somehow gave her unprecedented power over the very nature of the universe. She can :

However, even such awesome power cannot hurt a Kryptonian  unless she tries extra hard, or is in deep space.

Among her most powerful abilities are warping her opponents away (to another dimension if need be), and a seldom-used trick where she positions four micro-black holes around her target, trapping it in an inescapable gravity prison.

Her ability to reintegrate her body using gravitational force is beyond all physical limits. She could reintegrate after having been torn apart by no less than two micro-black-holes. Take that, Hawking  !

She also seems able to manipulate her own body (or at least her own face) to assume any appearance she wishes.

Rachael Berkowitz was born to a Warsaw tailor and his wife. Even as a little girl, she was extraordinarily intelligent. She was about ten when the Germans rolled in. Her parents and her fled on foot, stealing as they needed to survive. But German forces eventually caught up with them, shooting her hapless father dead.

Ida and Rachael were taken to a camp and separated. While, miraculously, both survived the war and camps, they each assumed the other had been killed in the camps. Thus, they went on with their life.

Ida Berkowitz was freed by the Russians. She eventually emigrated to the US, wanting to leave her terrible memories of Europe behind. The fate of her daughter, however, was quite unusual.

Unlike the other children she was thrown with, Rachael spoke fluent German. Thus, she overheard from the guards that they would all be killed. She started pleading in German that there had been an error regarding her.

Although her feeble lies convinced no one, she was kept for amusement. Her charm and poise were such that she became the sidekick of the camp’s commandant. Soon, she was a part of his family.

She found comfort and refinement with her new family. Rachael soon grew to hate her mother for having abandoned her, while her new father gave her so much. She became a dutiful little Nazi herself, hating the Jews as their “weakness” had been demonstrated by how her own mother had “abandoned” her.

When the Reich fell, the commandant had false American papers prepared for all of his family through ODESSA . Howbeit, Rachel was the only one not to be caught by the Soviets. Using her papers and the fluent English she learned in the commandant’s house, she emigrated to the US.

Land of hope and dreams

Getting her first PhD four years later at 18, she soon proved to be a genius at physics. Eventually she would, alone, formulate a theory unifying normal scale and quantum scale physics. She drew equations making all four fundamental forces as one. This extraordinary breakthrough gave her such knowledge about fundamental forces that she became Blackstarr. 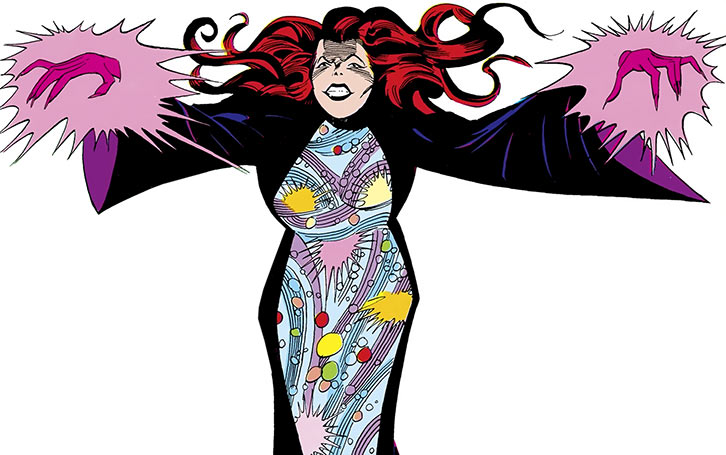 Wanting to reshape the world as she had reshaped herself, Blackstarr created a small National-Socialist party, the Party for Social Reform. She inspired waves of antisemitic violence in Chicago. Her considerable charisma got her party off the ground, holding serious rallies.

One of the Jews targeted by youths with spray paints was her own mother, who one morning, to her shock, found a swastika painted on her door. The violence peaked with a criminal fire at a local shul. Supergirl narrowly saving the rabbi’s life as the aged man had run back into the flames to save his copy of the Torah.

At one of the PSR’s rallies, a riot broke out. These agitators falsely claimed to be Jews. They were under the pay of Blackstaar’s lieutenant, and served as agents provocateurs. When Supergirl intervened, she got into a brief fight with Blackstarr, whose superhuman powers were revealed on national television.

This was part of her plans, as she expected that demonstrating she was powerful enough to hold off Supergirl would bring in votes. Exposing her face on TV, however, resulted in her mother recognizing her and confronting her some time later.

Supergirl then intervened again, and the angry Blackstaar took her to, allegedly, the center of the universe to do battle. Realizing she could not defeat her in a frontal assault, Supergirl tricked Blackstarr into exerting too much gravitational force. This created twin black holes that sucked Berkowitz in, seemingly forever.

However, Blackstarr reappeared during the Crisis. The epic event was causing all sorts of cosmic problems and the universe itself was shrinking. Supergirl and Superman were investigating in space looking for a cause and saw two suspicious black holes, behaving impossibly and emitting energy far beyond the normal amount of Hawking radiation.

As they arrived, Blackstarr popped out. She had managed to reintegrate her atoms since her previous defeat. Supergirl and Superman, believing Blackstarr to be behind the trouble, attacked her. Superman in particular was particularly tense. Thus, he proved uncharacteristically aggressive – to the point Supergirl actually had to rein him in.

After the fray died down, both Kryptonians teamed up with Blackstarr to stop the collapse of the universe. Blackstarr considered the universe was hers to conquer and was not going away before she could achieve that. Supergirl and Superman contributed their superspeed momentum to help, but Blackstarr’s gravitational powers were the key.

Berkowitz repulsed the boundaries of the collapsing universe, causing it to begin expanding again. Blackstarr vanished at the moment of her greatest release of energy. This fouled her plan to switch back to hammering Supergirl as soon as the universe was saved.

The Blackstarr that was seen after the Crisis appeared under weird circumstances, and was a young Black woman. While Blackstarr can change her appearance (so it could be her), this seems to be quite out of character for her. Furthermore, her whole behaviour did not match what was observed pre-Crisis.

It is *possible* that this is the same person. But it seems safer to assume a different post-Crisis version. We have the same problem with Reactron in this story, though less severe.

This version was in prison when she was assigned as a member of one of Task Force Omega’s “Suicide Squads”. Her colleagues were Deadshot, Major Disaster, Killer Frost, and Reactron. They were sent to investigate the island of Kooeykooeykooey, where a city full of powerful metahumans had suddenly appeared.

After the situation went tactical, Blackstarr teleported the dying Reactron to another dimension before his death resulted in an atomic explosion. She then joined the metahumans, pretty much taking over them. Her intention is that next time they return, they’ll purge the world of all non-ethnically pure individuals, and then move on to other worlds to do the same to them.

Her face is the one she designed. She left her plain, middle-aged features behind her – Blackstarr appears to be about 25 while she’s actually (when the story was published) in her mid-50s.

Blackstarr is a hateful, cunning manipulator. She has tons of dirty tricks up her sleeves – both political and tactical. She seems to strongly see herself as some sort of grandiose, melodramatic evil empress who is not to be trifled with – under any circumstances. Her men fear and respect her, and few people can stand up to her.

Blackstarr’s hatred is almost entirely based on a child not understanding why her all-powerful mother didn’t save her, and feeling deeply betrayed. Although she was raised a prize Nazi, she mostly focuses on antisemitic hatred.

“That… you shall never know, foolish child ! All you will ever learn is my name — for I am Blackstarr… and I am the power of the cosmos !”

“We are not free, my faithful ! Tyranny holds this great land in its power ! Look not to the government for answers and resolutions… they too are enslaved ! Look neither to institutions of faith… they have been deceived ! Who then is our enemy ? I needn’t tell you that ! You do not need to hear the words from my lips to know the truth ! All of us here recognize our oppressors as they have been recognized since the days of the pharaohs… all of us know we are under their heavy hand ! An international conspiracy !”

“You… filth ! Long ago I swore no one would ever touch me in violence again !”

“Fool ! Nobody comes upon Blackstarr without her knowledge !”

As usual, this pre-Crisis writeup is done on a post-Crisis scale. As usual, in the retconned continuity, she was presumably a Power Girl enemy.

As often, a lot of this is speculation – Blackstarr’s powers didn’t make much sense. She seemed to just be coasting along during the first encounter.

The starrs are right

Blackstarr was considerably more impressive in her second appearance than in her first. In her first appearance her goal was to fight Supergirl a bit then haughtily disappear. She had trouble realizing her colossal power wasn’t actually *hurting* Supergirl.

Ironically, much like Supergirl herself, she relied too much on her raw power and hoped for a good die roll rather than spending HPs.

By her second appearance, though, she actually was spending her HPs and making sound tactical decisions with them. This is a good thing for her, since it doesn’t take that many HPs for her powers to actually start scoring RAPs on Kryptonian-class opponents.

While the universe is collapsing during the Crisis, Blackstarr starts using her Deflection/Reflection and… well… she ’pushes’ on an entire galaxy, expanding while it is starting to crunch under gravitational collapse. She thus starts expanding the universe – which, at that point, is not much bigger than said galaxy due to the ongoing cosmic events.

This is hard to calculate, but this likely means 120+ APs of power and a Volume bonus to reach the volume of a mid-sized galaxy, whatever that is.

How do we handle that ? We don’t. Except maybe to theorize that really major cosmological phenomena might directly power some of her Powers and give them colossal Volume bonuses.

Basically it’s a pure plot device that can only be used in the most extraordinary circumstances affecting the physical universe. She thus probably wouldn’t be powered by the events of 52, since it created a multiverse without that much effect on gravity and the like.

Also, the laws of physics at that point of Crisis were downright screwy, making estimates of the APs she actually employed very uncertain. It could be considerably less than 120. 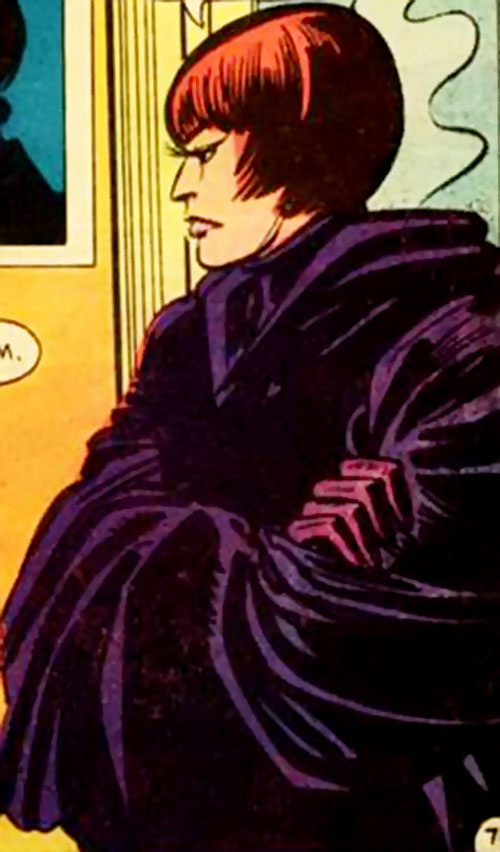 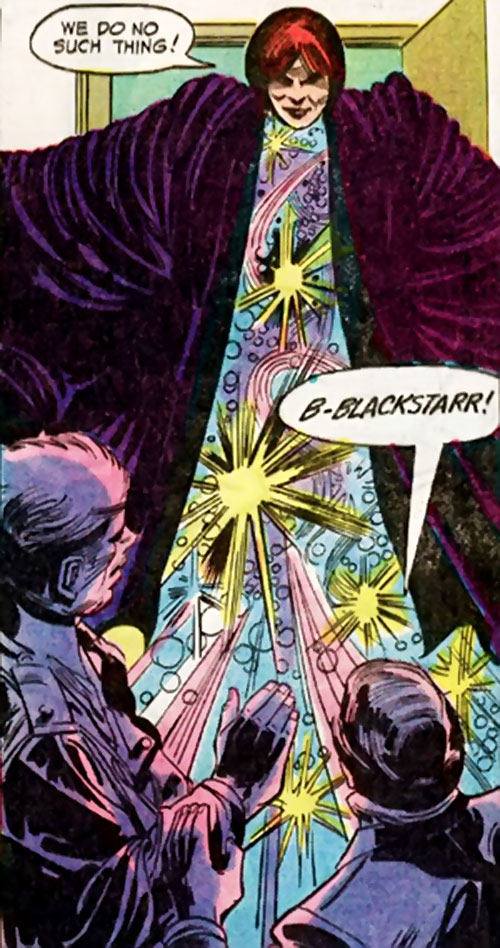 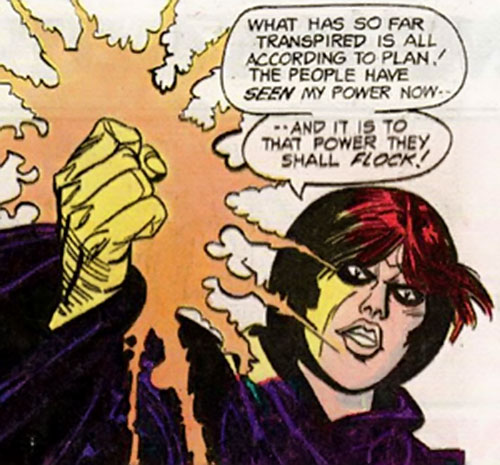 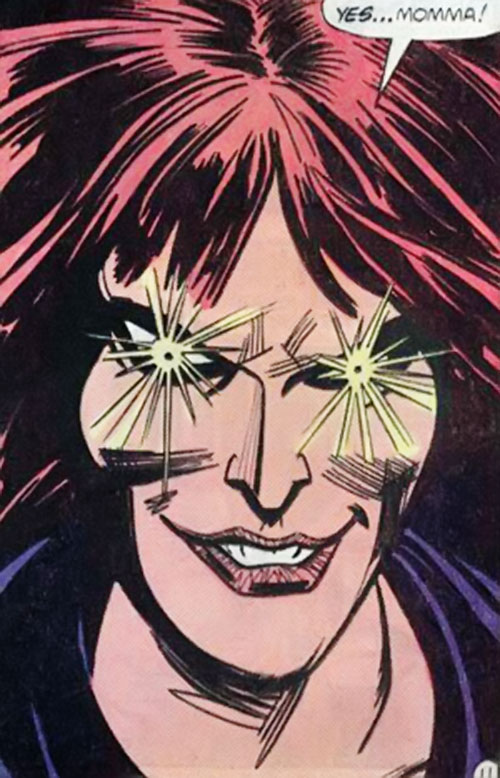 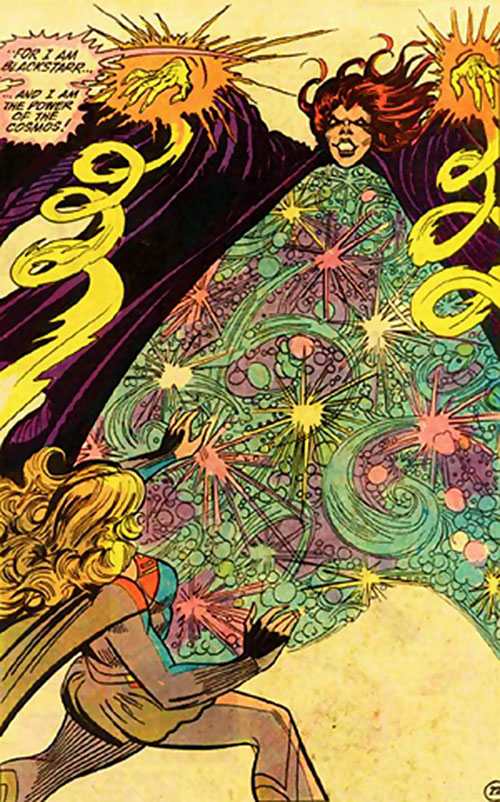