Beyond the typical “action hero skills,” and his obvious law background, not much apparent, though he presumably made the glider-wings on his own, making him fairly bright and handy, as well.

Charley Bullock grew up as a kid on the streets of Gotham City. He was searching for a direction in life in a city where the Batman was seemingly everywhere. During his teenage years, he met Ted “Wildcat” Grant, and the two subdued some local troublemakers.

Ted, as is usual for him, invited Charley to join him at his new gym, and became his unofficial mentor. This, along with growing up watching the exploits of Gotham’s premier crime fighter in his early years, greatly impressed young Charley.

These influences gave Charley’s life a purpose : helping the less fortunate. The clincher came when Charley defended a local store owner from some extorting thugs. When the owner asked Charley what could be done, particularly without Batman, it all clicked for the young man.

Attending law school (Brooklyn Law ), he was soon accepted as a junior partner (and top-notch researcher) to the law firm of Cranston, Grayson and Wayne. Here, he met Helena Wayne and, soon, would come into contact with the Huntress.

When the criminal named Karnage broke into the office, looking for Charley’s boss Arthur Cranston, this motivated him to pursue even loftier goals. When a shop keeper that Charley knew was attacked by gang members of the crime boss named the Boa, Charley proceeded to make a costume and a whole new life as the costumed crusader known as Blackwing.

Unfortunately, his first (and only recorded) case proved unsuccessful. One thug ripped his glider harness with his belt !. Bullock was taken captive by the Boa’s gang. However, he later freed the Huntress from the deadly embrace of one of Boa’s snakes, and had the presence of mind to record evidence that could be used against the Boa and his men.

Blackwing’s costume was an interesting riff on Batman’s . It was a grey body suit with navy blue briefs that climb the hips, blue boots and gloves, trimmed with gold, a huge, golden belt that narrows at the buckle, and a stylized bat-shape (specifically, a pair of bat-wings that connect at the tail, but have no head) spanning his entire upper chest (no yellow oval, since this is Earth-2).

In lieu of a cape, Charley wore bat-shaped glider-wings. He also had a cowl very similar to Batman’s, though the bat-ears and brow were a separate, white (or gold, depending on the colorist’s whims) piece added above the eyes.

Unfortunately, Staton apparently didn’t care much for Charley, so the costume sort of mutates from issue to issue, but this is the most unique version. Later versions look much closer to the Batman standard.

Out of costume, Charley is a well-built, handsome Black man with a close-kept afro, usually wearing a good-quality suit, appropriate for a member of Gotham’s top law firm.

Charley is the typical young hero of the ’70s/‘80s: Trying to make a difference, using his skills to more than the fullest, and apologetic when he screws up.

Out of costume, Charley still tries to make a difference, but from the courtroom floor, rather than the streets. He’s a top-notch, but still-caring lawyer (OK, OK, Earth-2 wasn’t very realistic…).

“There was a time when The Batman symbolized everything that was good about Gotham – and when he died this town’s sense of pride, of fair play, of what’s right seemed to die with him ! Maybe it was stupid, but I became Blackwing to be that symbol for people again – to restore their pride in Gotham – and spur them to take charge of this city once more !”

In the baseline DCU, a lawyer-to-be named Bullock in Gotham City ? No problem ! Charley could still have been trained by Ted – after all, who wasn’t ? And he might still work for an Arthur Cranston in Gotham, though minus Grayson and Wayne, since they don’t exist in this universe, and Cranston would be just another lawyer.

Charley is probably related to Harvey Bullock, of course, since it’s not all that common a name. Charley could be Harvey’s son from an old marriage to a Black woman when he was young.

Or he could be Harvey’s never-talked-about-until-now adopted son (hey, how many years was it before we found out that Commissioner Gordon had a daughter ?) who’s been away at law school, or even a nephew (through one of the same means) if you don’t want Harvey to have any kids.

In modern continuity, Blackwing most probably appeared during the Rogue-Batman/Azrael fiasco. It could, in theory, be the basis for a “Reign of the Batmen” storyline until Bruce reclaims his position, since there are some basic parallels between Azrael (or Hugo Strange) and the Cyborg, Superboy and Nightwing, and so on.

Such a plot could even be an excuse, through the magic of Zero Hour  and/or Hypertime , to bring back the Earth-2 Huntress and Robin, if one wanted (and I do).

I picture Dick maybe changing his last name to Greyson, getting a U.N. job, taking something like the “Red Robin” costume from Kingdom Come, and calling himself “Redwing,” and maybe even helping Nightwing out on occasion – but that’s another writeup altogether).

Vinnie had the good idea that, since Batman isn’t really superpowered, and is much more of a legend, he would probably draw many more “pretenders to the throne,” so don’t bother to limit yourself to only four Batmen.

Or, more simply, maybe Blackwing and Flamebird can work together and/or have a romantic relationship.

Equipment for a New Earth version of Blackwing

If he’s closely connected to Harvey Bullock in the post-Crisis DCU, then Charley’s costume probably contains elements from the old Checkmate uniforms, as well as the glider. Something like :

By John Colagioia with help from Vincent P. Bartilucci. 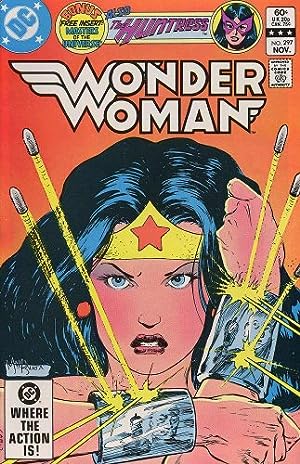 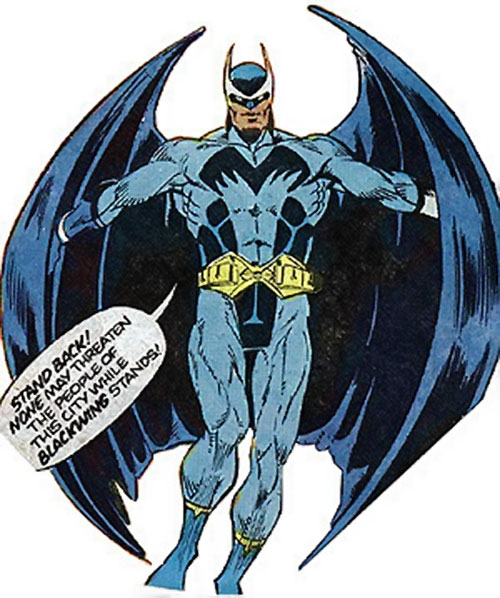 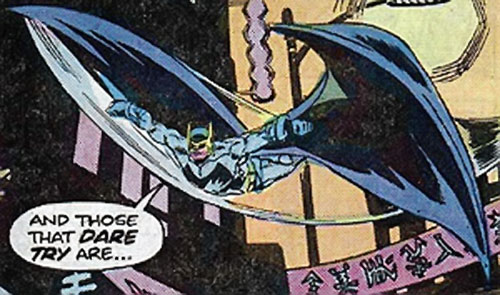 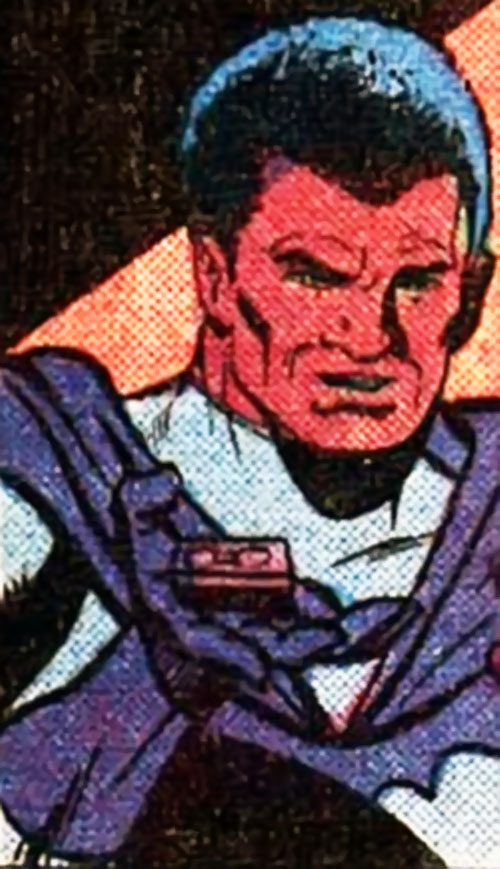