Whistler is a highly skilled gadgeteer  and vampire hunter. He possesses extensive knowledge regarding biochemistry and biology, specializing in the physiology of vampires. He’s also educated himself regarding the language and society of the vampire nations.

He was sharp and skilled enough to recognize Blade as a daywalker as soon as they met. Whistler is well connected and financed, so much so that Blade and he are able to move from place to place and set up expansive headquarters on a regular basis.

Whistler led a normal life until his family gave a wandering man a place to stay for the night. Their guest was the vampire Deacon Frost and he killed Whistler’s wife and children and crippled Whistler.

After that incident, Abraham Whistler dedicated his life to eradicating the vampire menace and in particular Deacon Frost. He established himself as a skilled vampire hunter and became very knowledgeable about vampires.

When he ran into the adolescent daywalker known as Blade, he was canny enough in the ways of vampires to recognize the young man’s nature. He took Blade in, taught him about vampires in general and Blade’s unique qualities in particular. Whistler became like a father to him.

Applying his engineering and chemical expertise to creating vampire-hunting weapons, Whistler aided Blade in becoming the vampire nations’ worst enemy. As he put it, “Blade ferrets their rat-holes out, I map them. Then we blow them all to kingdom come.” 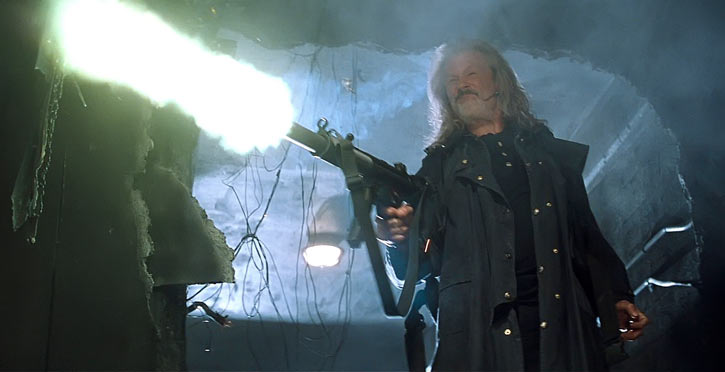 Whistler and Blade finally caught up with Deacon Frost in New York City. They finished off their mutual nemesis, though Whistler was fatally wounded during a vampire attack.

When Blade returned to his lair after defeating Deacon Frost, he discovered that Whistler’s body was gone. He quickly surmised that the vampires had taken him. The daywalker spent the next two years hunting rumors of Whistler’s whereabouts throughout Europe.

He finally found Whistler suspended in a vat of blood in a vampire hideout in Prague. Blade injected Whistler with a retro-viral detox formula. That reversed the vampiric virus and restored Whistler to normal human health. Whistler told Blade that the vampires had whiled away the last two years torturing him to death and then throwing him into the vat to heal.

No sooner had Whistler returned to action than the vampires approached Blade under a flag of truce. The vampires needed help bring the reaper menace to heel. Whistler and Blade managed to survive the best that both the reapers and the vampires could throw at them. Then they went back into the vampire hunting business with a vengeance.

His right leg is in a brace as a result of the permanent injuries inflicted by Deacon Frost.

Whistler is an old-school tough guy with an earthy way of speaking. Whistler has a cynical, often self-deprecating sense of humor but can be very sensitive when he needs to be.

Just as Blade thinks of Whistler like a father, Whistler considers Blade a son to him. But in true macho guy fashion they’re both too stoic to say it aloud to one another, demonstrating it with deeds rather than words.

Whistler has little patience for wannabes or people who think they’re tougher than they are. But in the best scientific fashion he’s very open with those who have demonstrated expertise in their fields, openly sharing his ideas and knowledge and encouraging them to do the same.

Despite all that he’s been through, Whistler has an amazingly stable personality. Though he’s dedicated to eradicating the vampire threat, he’s not consumed with bitterness over what happened to his family. He also held up incredibly well after his ordeal in the captivity of the vampires.

Indeed, when it was finally over, in some ways Whistler seemed to adjust to all that he had been through with a little more equanimity than Blade did. Despite all of the personal grief he has suffered at the hands of vampires, he was able to set that aside and work alongside them when dealing with the reaper menace.

Most of the tension came from basic personality conflicts rather than the fact that their enemies were vampires.

(After blasting his way through a wall) “Did I catch you fuckers at a bad time ?” (Opens fire with assault rifle)

Regarding Blade: “You think I’d let him run loose without a chaperone ?”

“I’m getting too old for this shit ! Somebody get me a goddamned wheelchair !”

Reinhardt: “Keep talking, honky-tonk. Just makes my sending you to the next world all the sweeter.”
Whistler: “Been there, done that. Do your worst, chickenshit. We’ll settle up after.”

(After Whistler’s retro-viral vampire detox)
Blade: “How do you feel ?”
Whistler: “Like hammered shit !”

(After being scolded for turning on the ultraviolet light) “Hey, some of us can’t see in the dark so well, what the hell else am I supposed to do, ya fuckin’ nipplehead ?!”

The DCU has vampires. So dropping Whistler in either by himself or with Blade doesn’t present any difficulties.

Whistler could just as easily be hunting any other supernatural threat with appropriate adjustments to his background. The cinematic Blade write-up is a good demonstration of the equipment that whistler produces. The GM should equip Whistler based on the traits of the supernatural menaces he hunts, whatever they may be in a given campaign.

Constantine and Whistler would have very likely crossed paths and might do so again if one of them encounters an enemy that the other could help them defeat.

Whistler might have provided Mister E with some items out of their mutual interest in slaying monsters. But the two would not have much of a relationship beyond their shared profession.

Whistler’s relaxed, vulgar personality would likely aggravate Mister E to no end. Whereas Whistler would likely point out that Mister E was wasting a perfectly good vampire stake by keeping that stick up his ass.

Equipment:
Most of Blade’s equipment was designed and built by Whistler. Whistler’s fond of using a duffel full of heavy explosives and assault rifles on those occasions when he ventures into the field — just use standard equipment stats with appropriate adjustments (the guns will have silver bullets, for example).

Before Whistler met Blade he was much more active in the field, but hadn’t honed his Gadgetry skills as finely as he would later on nor had he become as prominent in the vampire hunting community. At that stage he had 45 HPs and Weaponry: 07, but only had Gadgetry: 06 and Resources: 005. 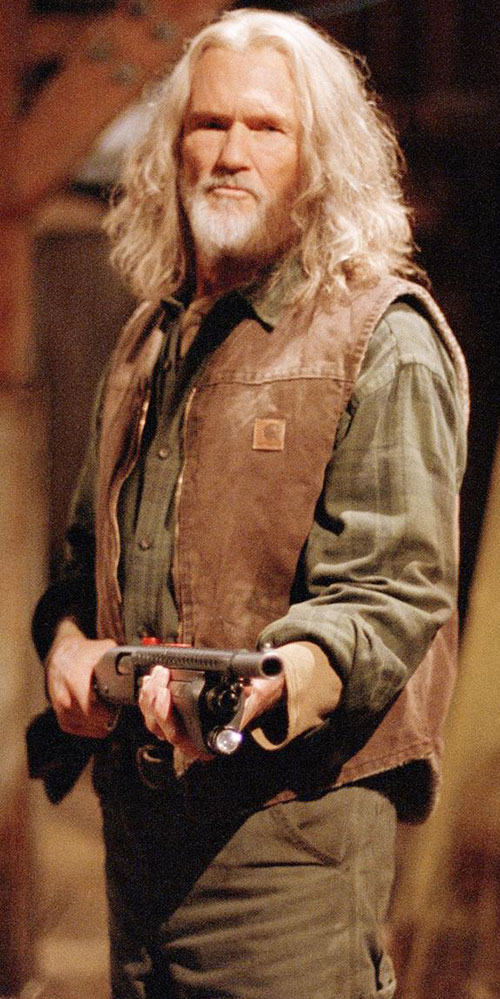