Coleman is an elite commando, specialising in taking down superhumans.

He was part of StormWatch: Team Achilles, an intriguing (if self-indulgent) 2002+ book that met a ridiculous demise.

Coleman is a formidable fighter and commando. He’s particularly strong and adept with an incredible array of weaponry.

He seems to prefer close combat work using a SMG , a pistol or even one of his huge, baroque knives.

Blake Coleman is a former member of the US Army’s Delta Force. He proved so adept with Delta operations that he graduated to I.O. and became a Black Razor. From there he joined Santini’s personal Black Razor team, a unit that could engage the WildCATs. He was still under Santini’s command when the Black Razors were involved in Project : ENTRY.

Project : ENTRY was an attempt to have a “door” technology. It would be similar to the teleportation door of the Authority’s carrier. A door was successfully opened to another dimension. Half a Black Razors units, led by Coleman, stepped through for recon and science work.

When they didn’t come back, Santini and the remaining half of the team went in. What they didn’t know was that project : ENTRY was being sabotaged by I.O. senior executive Ivana Baiul. Her goal was specifically to get rid of Santini.

What Coleman did in the following months or years is unrevealed. He was already divorced since at least his Black Razor days. It seems likely he did more work for SOCOM .

When StormWatch’ Team Achilles was formed, Coleman was the first man to be recruited by Santini. He made Coleman his second-in-command. Coleman helped Santini in picking the team members, approving each of them. However, Blake was a bit uncomfortable working with so many furriners.

Three weeks before StormWatch’s launch date, the UN were attacked. Santini and Coleman retook control of the situation. Even though they didn’t carry any weapons and were just wearing running clothes.

Despite the extreme difficulty of Team Achilles missions, Coleman proved to be a crack soldier time and time again. Both through his extraordinary bravery and through his armed and unarmed combat prowess.

During a mission at the Federal Reserve  in New York, the team managed a very difficult assault to reach the Reserve’s main, hyper-secure vaults. Coleman was securing the rear. However, while he had his back turned, one of the corpses from their fallen opponents reanimated and shot him dead.

The rest of the team would later discover that the forces behind the Federal Reserve robbery included a SPB  who could control corpses.

Colonel Santini and Victoria N’Gengi aka Flint served the necessary papers to his widow, Denise, and his 16-years-old son, Danny. Coleman left behind a letter for his son. Santini easily convinced Denise to take the check to fund Danny’s tuition.

Coleman is a rough, direct, super-macho big guy. He is a confident elite soldier, an experienced and charismatic officer, and a good friend of Santini.

He swears a lot, and never hesitates to get in close combat with even the most powerful opponents. Which is actually a valid approach in comic books. He seems a bit conservative, but also disillusioned about US policies and spooks. This is reinforced by his traditional “real soldiers can’t stand spooks and suits” attitude.

He professed an hatred for cold climates, though it may just have been racial humour. Basically, he’s the archetypal “Black sarge” of US war fiction.

Coleman was trying to mend bridges with Denise, and was delighted when she started allowing him to spend time with his son.

Hassan I-Sabbah: “Kill them ! Quickly !”
Coleman, teleporting behind him and blowing his head off : “If you insist.”

(A giant SPB’s corpse starts falling toward Coleman) “You gotta be fucking kidding me” (jumps aside at the last second).

Coleman, sarcastically commenting on the lack of guns : “Sweet ! Now I gots me a knife to fight some superpowered terrorists with !”
Santini : “Always the wetwork with you.”

Notes:
StormWatch personnel are placed outside their normal chain of command ; while on StormWatch duty their Rank Advantage becomes a 0-pts flavour advantage. Rank more or less applies *within* Team Achilles rank, but this is quite looser than in most military units. 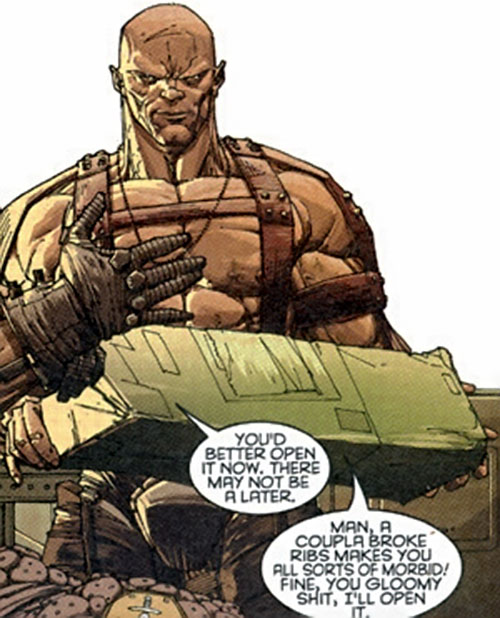 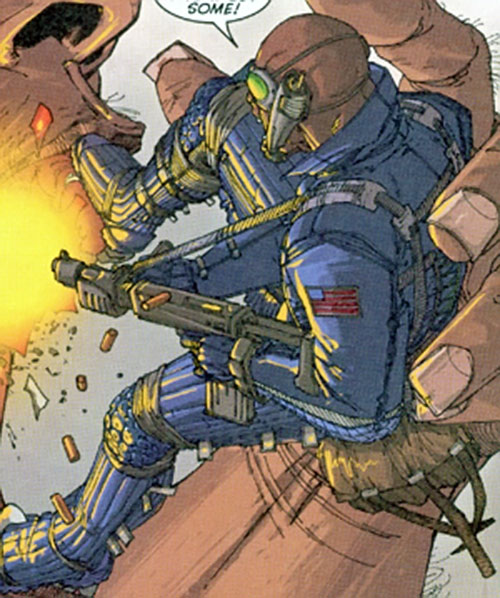