Blanka was raised in the Amazon rain forest by animals. He’s thus a hardcore survivalist.

He’s also picked up some of their skills and powers along the way. His abilities include:

Blanka is a top fighter, also able to hold his own against the top fighters from around the world.

Game play wise he’s a charge character. Those tend to be best played more defensively. Yet Blanka does have an excellent arsenal for punishing mistakes as a lot of his moves come out quickly in order to capitalize on an opening.

His style also relies on unpredictability. Blanka’s got good mobility and great moves to fight at short, mid, or long range distance.

Basically he’s more of a balanced slightly defensive character for players who favor keeping their opponent guessing and employing a bit of strategy.

Young Jimmy was sent on a trip by his mother. However the plane was struck by lighting and crashed with Jimmy being the sole survivor. He learned how survive by befriending some of the jungle animals and eventually going on to learn some their abilities.

Blanka broke into a poacher’s truck to steal fruit. He ate as much as he could and promptly fell asleep and awoke at a nearby village. This was his first time in civilization since the plane crash. Thus, he wasn’t quite sure what to make of it. 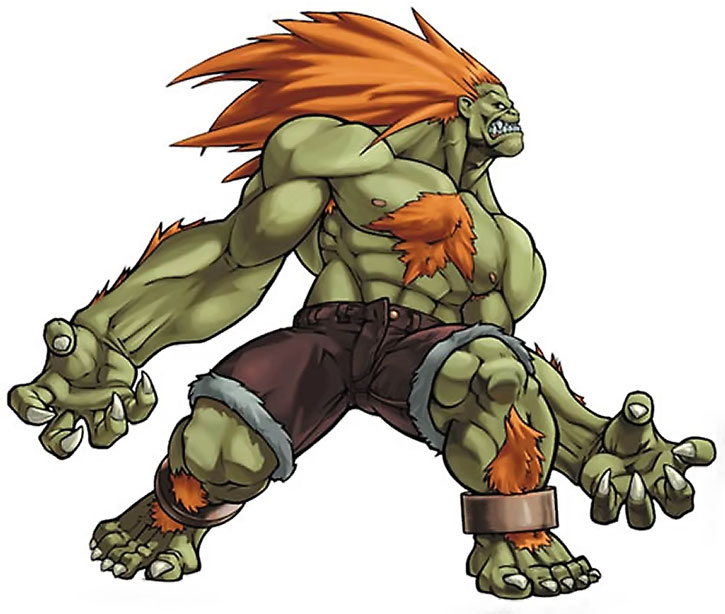 The villagers feared this strange beast and attacked him. Blanka defended himself by knocked them all out before returning to the jungle. But he could not get this strange place out of his head. So he stayed nearby to observe. Eventually the locals came to trust him and he became their mascot of sorts.

News spread. Many tourists flocked to see the strange beast. Their numbers included many fighters wishing to challenge it. Dan Hibiki was one of these challengers and he was promptly thrashed. However the good natured Dan decided to befriend the beast. He took Blanka with him as a traveling companion. Blanka not quite sure what to expect, yet the pair set out.

They picked up another traveling companion on the way, the school girl Sakura Kasugano. While they were in Thailand they stumbled upon the main Shadaloo base and the heroes that had come to destroy it. Blanka fought Zangief. It is unrevealed who won the fight, but their clash prevented Zangief from entering the base and destroying the Psycho Drive.

Blanka fought in the SFII tournament which was highly televised. His mother recognized his anklets and was thus able to reunite with him.

(Official sources state that he was born in Brazil. But his mother’s garb is very clearly traditional Thai. So it’s possibly that he was originally from Thailand.)

Blanka’s reunion with his mother was cut short as his strange appearance attracted too much attention. He then traveled to Hong Kong with Dan, where his friend incessantly grilled him about the last SF tournament.

Shortly after that the trio of Dan, Sakura, and Blanka all enter the new World Warrior tournament presented by S.I.N.. Blanka did so as he sought respect.

The tournament culminated in the S.I.N. HQ. Therein, Blanka was separated from his friends. He lost in the final stages to an unrevealed challenger.

However, Blanka managed to locate Dan as the HQ was being destroyed after the final climax. Flames where racing towards them, but Ryu and Sakura managed to put them out with some mighty Hadoukens! (I was unaware that Energy Blast chi  attacks could put out raging infernos – Ed..)

During all the chaos his mother had grown worried. She had thus come looking for him again, and found him in the aftermath of the destruction. This time his return home is much more positive as the further media coverage have attracted many curious people who wanted to become his friend.

Blanka became something of a local legend in his “hometown” in Brazil. He now made a living selling cute dolls in his likeness to cash in on his popularity. But fellow Brazilian Laura Masuda accidentally stepped on one of his dolls, and the two fought. After Blanka defeated her she apologized and asked her brother Sean to help him sell the dolls. 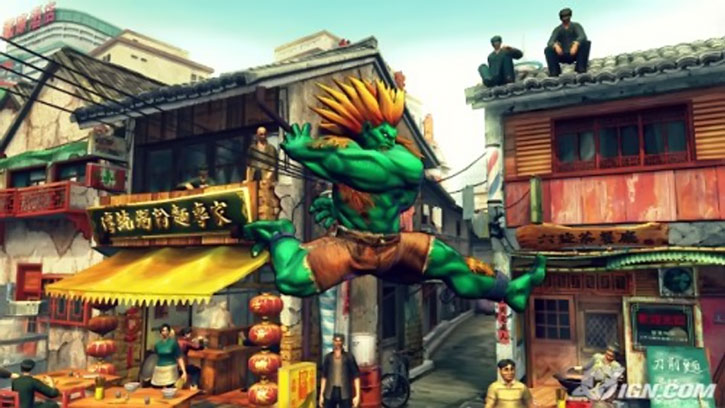 Sean, being half Japanese, realised that the cute dolls would sell far better in Japan. So the two headed there. While they were selling their goods in an arcade, two schoolgirls showed them that the dolls could also be found in vending machines. Blanka angrily thrashed the machine with the counterfeits, triggering a panic.

The nearby Sakura intervened, calming Blanka down. After explanations, the arcade manager agreed to drop the matter. Ashamed by his outburst, Blanka returned to Brazil and gave up on his doll business. But the counterfeiters continued their business, becoming hugely successful.

He likely returned to Brazil to live the simple life with his mother. Although he probably does get the odd visit from a tourist or a fan and certain from his friends Dan and Sakura.

Simply put he’s a large muscular beast like man with a crazy orange mane of hair flowing down his back. He also has large patches of body hair on his chest, forearms, and shins. This along with his trademark green skin, claws and fanged teeth make him look pretty intimidating.

He usually only wears a pair of simple ripped shorts and his lucky anklets that he received from his mother.

It’s worth noting that he’s gone through several different looks depending on who the artist was. He originally looked more humanoid than actual human, like he was a terrifying different species like Big Foot, but later incarnations of his character made him look not quite human, but still cute and cuddly.

His appearance has yo-yoed back and forth a couple of times again depending on the artist, but the most recent official artwork is somewhat in between as to how savage he looks.

Despite his harsh and feral upbringing being raised in the woods Blanka is actually a gentle and peaceful soul. It’s perhaps due to the fact that he had to learn to communicate with the animals in order to survive that he’s a bit more social. He does however have a tempter and it’s said that he will fight like a wild animal when enraged, but that’s pretty rare.

Also, while he may be uneducated he’s certainly not dumb. He’s managed to learn English and Portuguese and quite possibly a few other languages. He also understands the basics of commerce and marketing.

He unfortunately does seem to have low self esteem due to his looks and likely a lot of ridicule. However when he does make friends he is fiercely loyal.

“Seeing you in action is a joke !”

Editor’s note: He’s only recently begun speaking in fluent full sentences so there aren’t a ton of them. Previous quotes include a lot of “WooooWoOwWow WoooWowWowWow !” and the like.

Blanka can probably be dropped in as is. Perhaps a connection to Fire could be added (hey they’re both green and from Brazil).

Drawbacks:
Minor Rage, Socially Inept, Strange Appearance, Misc. Blanka is incapable of speaking in an intelligible language (other than being able to communicate with Dan). He is also unfamiliar with modern human society or technology due to living in the wild all his life.

Although it’s highly unlikely to cause any damage to opponents it does tend to humiliate them. At the GM’s discretion a trick shot could produce a few APs of Friction Control (reduction of friction only) or perhaps Sensory Block (sight only by hitting an opponent in the face and temporarily blinding them).

In SF IV Blanka learned how communicate fluently in full sentences. Previously this had been a series of howls that his friends somehow understood.

He also previously had Socially Inept and the general fish out of water syndrome where he didn’t understand the modern world. This mostly appears to be gone by the time SF IV rolls around.

Prior to this his Creepy Appearance was actually a Strange Appearance, but he seems to have gained some acceptance and also his Local Hero (his fans).

Blanka was also slightly more powerful in his noncanon EX appearance, so his Martial Artist Skill rises to 08 and his Hero Points total to 70. 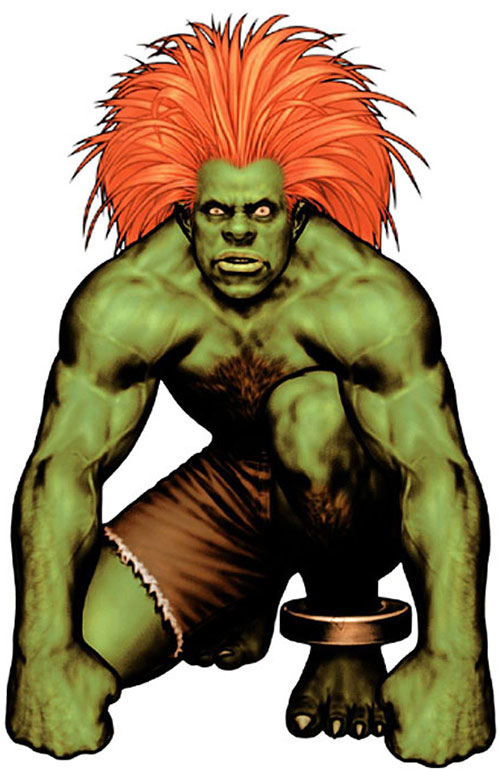 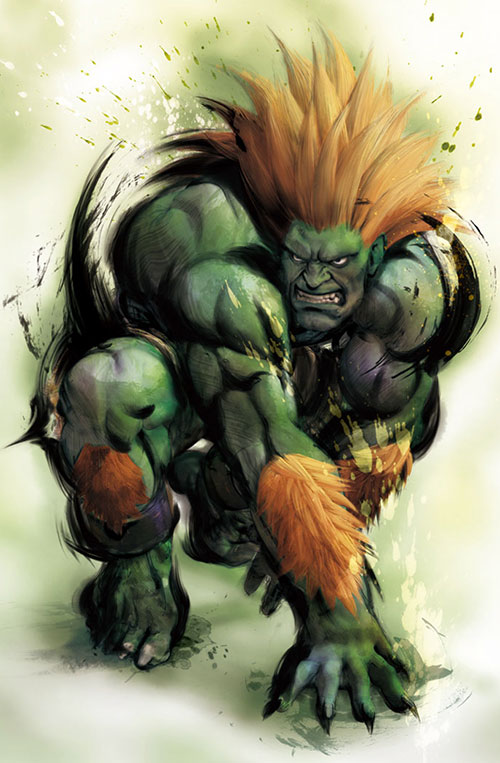