Blizzard II is an athlete in excellent shape. His main weapon is the Blizzard suit. Not only is this a good, light body armor and superlative cold weather suit, it has an elaborate system to process moisture and convert it to ice.

He is very adept at skating on ice slides he creates below his feet, reaching high speeds. Such as slides are very low friction, and an untrained individual on one will have lots of difficulty moving without falling (Glue).

A hired thug in the employ of Justin Hammer, Donny Gill was given a suit. It had been created by Hammer’s people from studying that of the original Blizzard, Gregor Shapanka. As the new Blizzard, Gill was assigned to work with other costumed villains in Hammer’s employ, and was eager to show his gratitude to Hammer.

Working with the Beetle (Abner Jenkins) and Blacklash, he was sent to recover Force, a former operative of Hammer who had deserted and gone to the police. Attacking the police station where he was being held, they ran into trouble due to Tony Stark’s presence, even though Iron Man didn’t appear. Donny’s inexperience didn’t help matters.

Forced to flee the scene, Hammer offered them a chance to make up for their failure when he got another lead as to Force’s location.

The lead proved to be a trap, and they found themselves facing Iron Man and Force. Force recognized Donnie as being as misguided and misled as he had been. As a result, he tried unsuccessfully to reach out to the young man. Donnie’s inexperience again got in the way during battle, and he managed to electrocute himself, getting caught while his allies fled.

Tony Stark tried to offer Gill legal and moral guidance, recognizing there was still a chance to save him before he became a hardcore villain. But before he could be remanded to prison, Gill was broken out by the Rhino, at Hammer’s orders, which strengthened Gill’s loyalty to him. But Hammer, learning of Stark’s interest, decided to use Donnie as a bargaining chip.

Teamed with Boomerang and Blacklash, Blizzard was sent to try and stop the Ghost, an industrial saboteur targeting Hammer’s facilities. They failed to stop him, so Hammer made a deal with Stark.

Iron Man helped them foil the Ghost’s next attack, only for the three villains to turn on him. Boomerang and Blacklash then abandoned Gill.

Iron Man played Gill a recording in which Hammer made a deal with Stark to turn Donnie over to him in exchange for his help. Crushed, Gill went peacefully into custody.

He was next seen working for Spymaster, along with Beetle and Blacklash. They broke into Stark Enterprises under cover of Tony Stark’s funeral. They were, unsurprisingly, met by Iron Man, whom the Spymaster had been training them to deal with. 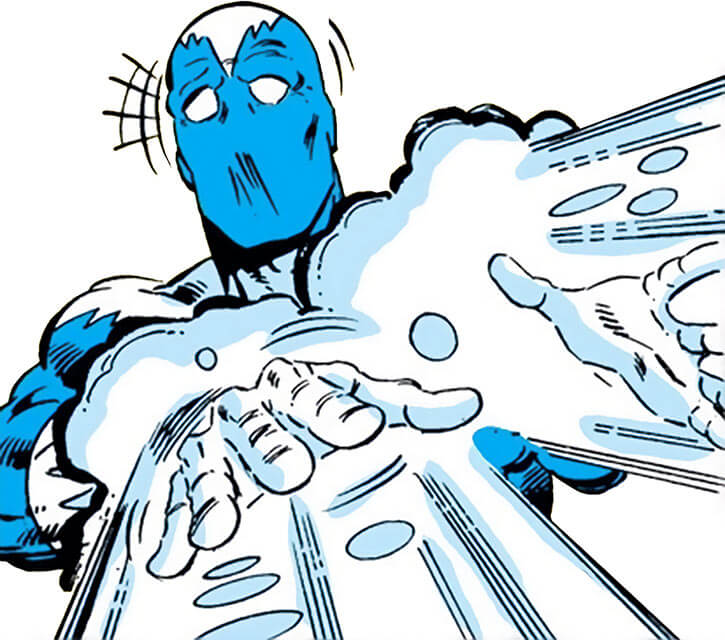 Unfortunately he didn’t act as anticipated (there was a different person in the armour). Thus, they initially fell fairly quickly. They had a second chance when the Avengers West Coast turned up, and, not recognizing the new Iron Man, attacked him. The villains attacked the Avengers, but were again subdued, and shrunk by Hank Pym until they could be handed over to the authorities.

After trying a defective replica of Shapanka’s final Blizzard suit, Donnie testified in court against the Tinkerer. The Tinkerer, who had allegedly repaired the suit, was being sued by the Trapster.

Joining the Crimson Cowl’s large Masters of Evil, Blizzard was part of her plan to hold the world ransom using a weather-control device. They were opposed by the Thunderbolts, who foiled the plan. The Thunderbolts captured most of the Masters, including Blizzard.

Donnie ended up in Seagate prison, where he was soon joined by Thunderbolt MACH-1 (Abner Jenkins), who’d voluntarily given himself up to pay for his crimes. Contacted by Justin Hammer, Donnie joined fellow prisoners Boomerang and Whirlwind in trying to orchestrate a prison break, which would have succeeded if not for Jenkins’ intervention.

Free not long after, Donnie was again in the employ of Hammer. He teamed with Whiplash, Hydro-Man, and Speed Demon, as protection from the ’new‘ Beetle, who’d been raiding Hammer’s facilities.

Resorting to robbery, Gill attacked an armoured car in New York. All that got him was to be confronted by, first Nova, then the rest of the New Warriors, and finally Iron Man. The latter was actually a rogue Iron Man armour. It beat Gill badly, and might have killed him if not for the New Warriors intervention.

Next seen as part of a mercenary group hired by the Four Winds crime family, Blizzard invaded Agent X’s funfair headquarters. Blizzard and his allies suffered a humiliating defeat, Donnie having an apple forced into his mouth.

Hired by AIM to assist in one of their world-conquering plans, Blizzard was in space with Modok and AIM troops when the Avengers arrived to stop them. She-Hulk played a vital role in his defeat. Angered, Gill later confronted her in a bar where she was drowning her sorrows, but she invited him to join her for a drink instead.

They both got drunk as he contemplated his lack of success, before collapsing in a drunken stupor. She-Hulk then called for the police to take him away, before reverting to her human form, and promptly vomiting all over him.

A sound of thunder, part 1

Deciding to try and turn his life around, Donnie joined MACH-4’s new Thunderbolts. He earned a parole as part of the team. Despite his growing experience with the suit, Donnie still lacked confidence, often to the detriment of the team. Further, he was always looking at others to tell him what to do.

Blizzard also seemed to form an attachment to Speed Demon (James Sanders), seeming to adopt him as a big brother figure. 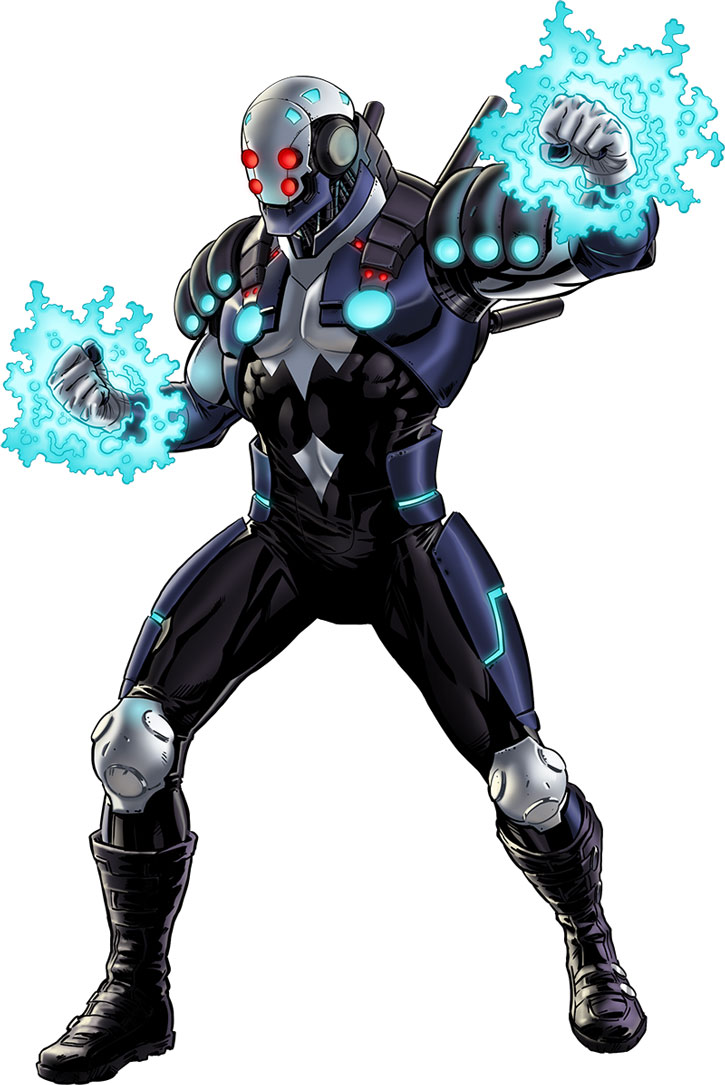 When he learned that Sanders was considering pulling a job with the Shocker, Donnie tried talking him out of it. Sanders pulled the job anyway, using his old Whizzer suit, unaware that Donnie had planted a tracker on him. Donnie tried to stop him during the heist, but Sanders beat him, leaving him tied to the Throgs Neck bridge, half-naked, with a note thanking him for trying.

Following the Thunderbolts freeing Manhattan from the Purple Man’s control, Songbird took control of the team. She then fired Donnie. Depressed, he was recruited by MACH-4, who had also been thrown off the team, and the Fixer, who promised to help him build an upgraded Blizzard suit.

A sound of thunder, part 2

Working for Baron Zemo, they were part of the team he built up to oppose the Thunderbolts. That was because one of the Thunderbolts, Photon, posed a threat to the universe. Finally attacking, the threat Photon posed was dealt with, and the two groups merged into a new Thunderbolts.

Songbird revealed to Donnie that she had recognised in him some of the reluctance to take responsibility for his life that she’d felt. Thus, she’d fired him from the team to force him to choose what he wanted for himself, rather than just following orders.

When the Superhuman Registration Act came into effect, the Thunderbolts rounded up all the costumed criminals it could on behalf of the authorities. They then offered them the option of joining the growing Thunderbolts army. The force was actually being built to oppose the Grandmaster‘s machinations, and Donnie was part of the group that faced him and his Squadron Sinister.

The Grandmaster was defeated, but the final battle completely drained Donnie’s Blizzard suit as he protected the team from the lethal energies unleashed, leaving him powerless.

Fully pardoned for his crimes, but with no likelihood of the Blizzard suit being rebuilt, Donnie reconciled to having to make a life for himself without it. But he felt that he hadn’t fully had the chance to do things right, to be the hero he could have been.

Eager and earnest, Donnie is usually trying to impress his boss, whoever that may be at the time. But he has had a lot of self confidence issues that have made that problematic.

Initially, while eager to prove himself worthy of the suit, and Justin Hammer’s apparent faith in him, he was still inexperienced in using his powers. Thus, he would make rookie mistakes (like icing up a corridor to stop cops firing at them, even though their target was along that corridor).

This exacerbated his existing self-esteem issues. As a result he’d sometimes be uncertain what to do in battle, looking to others for guidance, as he seems to have done so often.

He became a more outwardly confident villain, not hesitating as much, although he continued to make dumb moves now and again, but not as often. He seemed to want a respect and recognition he could never achieve.

Finally realising he was getting nowhere as a villain, he tried being a hero, finding himself back being the uncertain rookie again. While he seemed to know the right thing to do in a situation, he didn’t trust his own judgement.

It was only when Songbird threw him off the team that he really seemed to gain any certainty in his path, but even by the time he left the team he still felt he hadn’t achieved much.

If you have introduced Blizzard I in the DCU, Blizzard I may still be around or he may have been slain by Major Force, with Donny Gill somehow gaining access to the Blizzard suit.

Advantages:
Familiarity (Maintenance and repair of the Blizzard suit ; Ice-skating).

Equipment:
BLIZZARD SUIT [/BODY/ 08, Cold immunity: 08, Fog: 06, Glue: 07, Ice production: 11, Temperature control: 04, Bonuses & Limitations: Fog has a further +5 to volume (+1) ; Glue is resisted with DEX and not STR ; extensive experience with movement on ice from the target reduce Glue to half efficiency – and to nothing if the target is wearing proper skating equipment ; Ice control is only half as effective as normal when adding to RV (-1) ; Ice production receives +2 APs of efficiency when trapping people, but loses 2 APS of efficiency for direct attacks ; Ice production only allows a movement rate of 05 (-1) ; Temperature Control Only to Subtract Heat (-1)].

Prior to his time with the Thunderbolts his SPI was one AP lower, and his HPs were about 020. He did not have his Connection yet, but a Low Connection with Justin Hammer’s organisation, and had the Uncertainty Drawback.

During his time with the Thunderbolts while still in his old costume, its R# was 04, as it was always on the verge of breaking down.

Helper(s): Chris Cottingham, Gareth Lewis (numerous tweaks and modernisations for v0.9, plus new Personality section). v0.9 History section based on the one at Marvel.com. 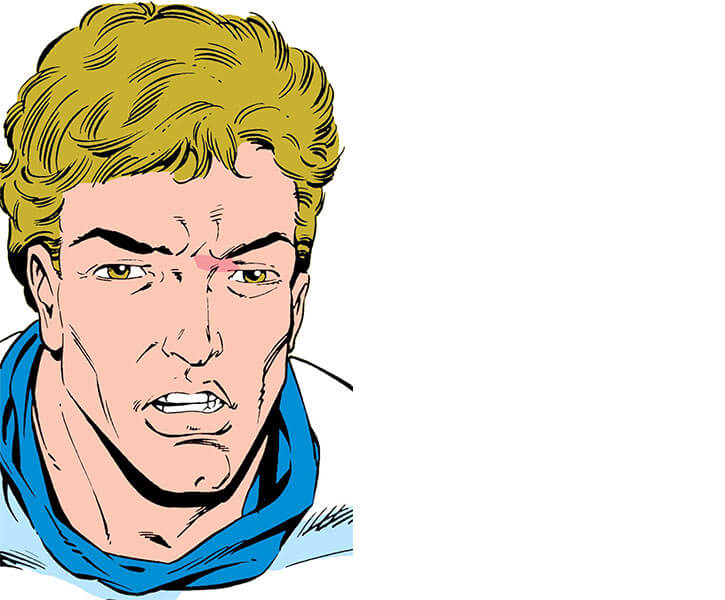 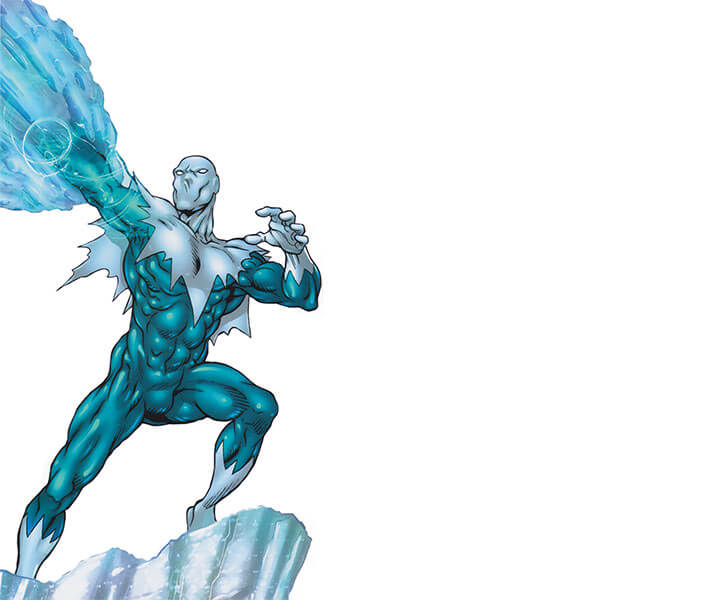 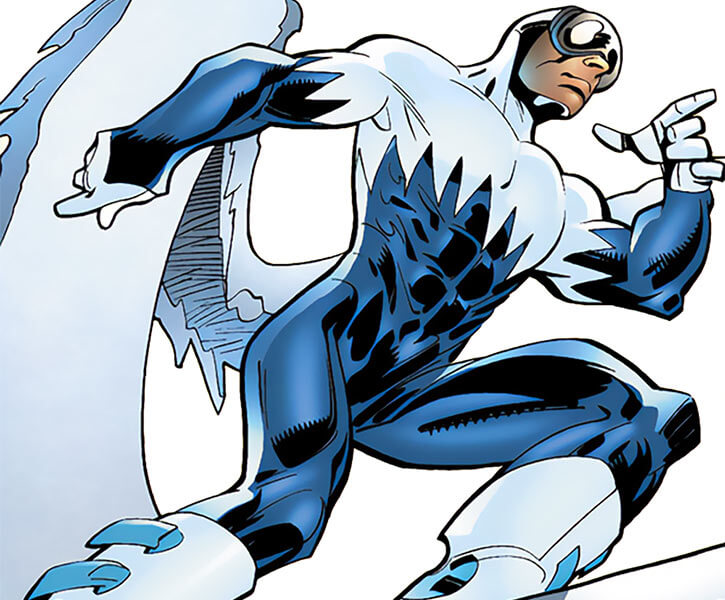 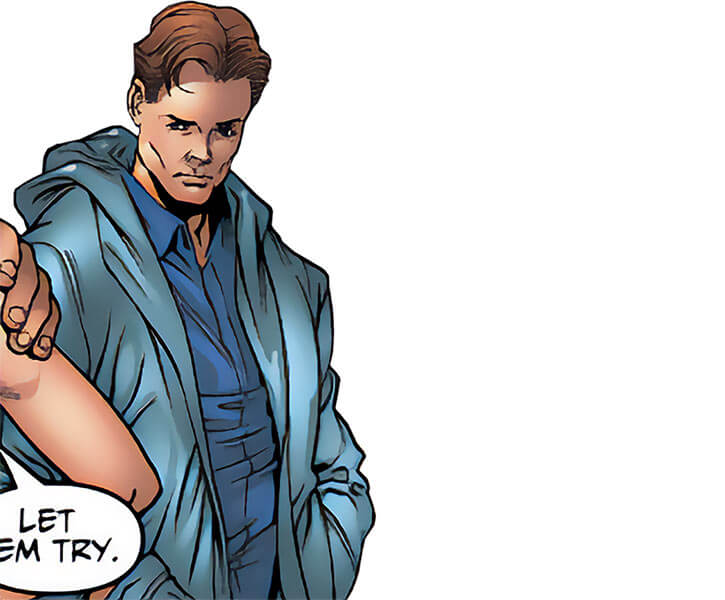 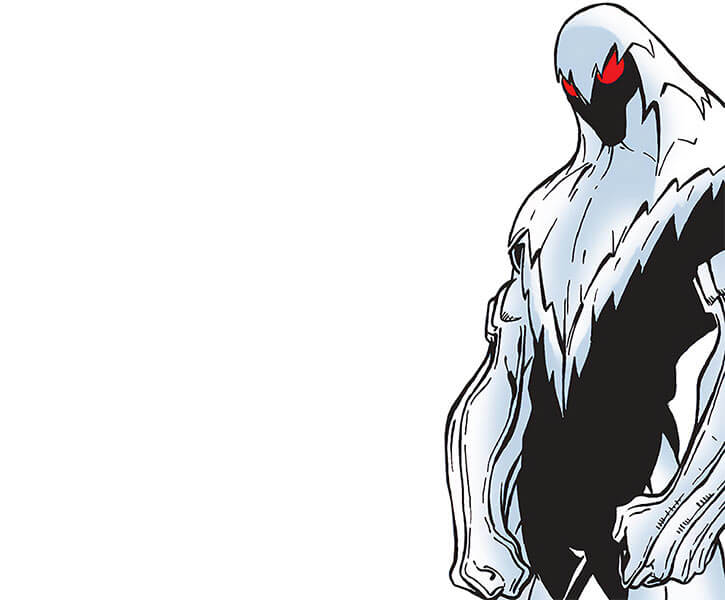 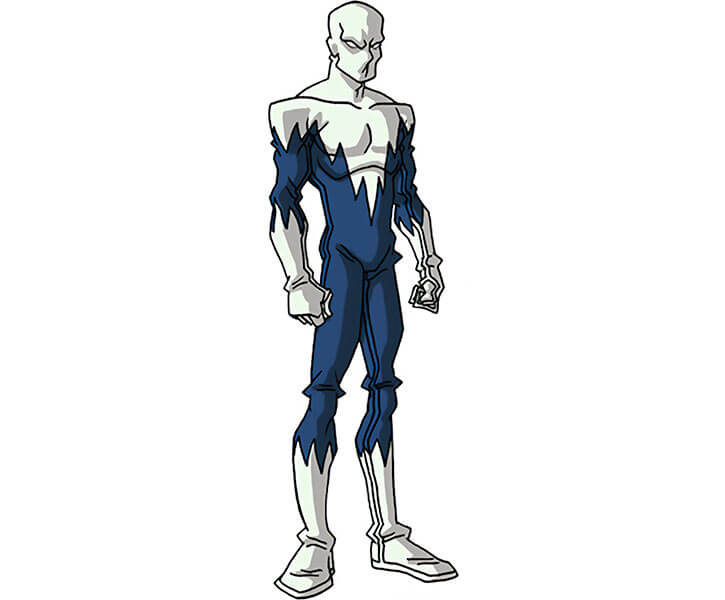 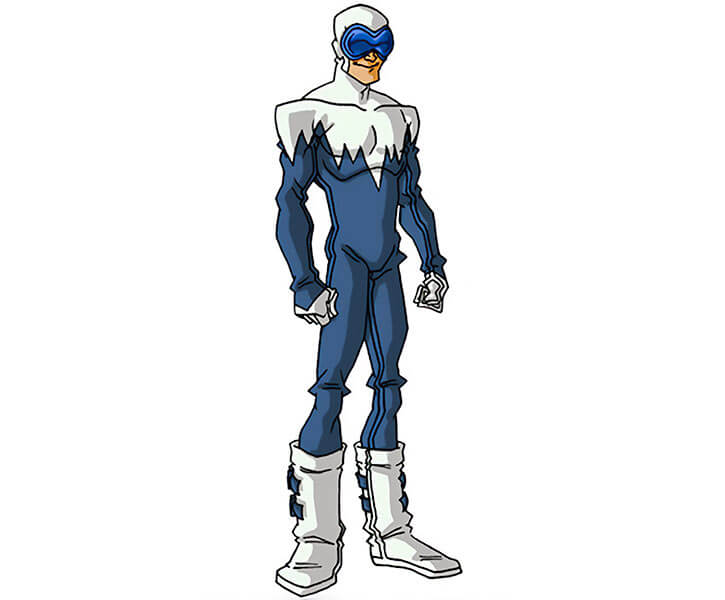