Dr. Shapanka is a brilliant inventor, scientist and engineer. His most remarkable breakthroughs have been in cryogenics :

This is a bodysuit with a blue belt and backpack. It can “ice up”, turning Shapanka into a living, moving statue of ice and hardened snow. From the backpack comes a tube ending with an adjustable nozzle. It projects cold jets of oxygen, creating large blocks of ice that do not smother those trapped within.

The jets are large and powerful. Jack Frost can easily walk it across several persons to freeze them all. A less-than-one-second burst is enough to trap even a large man into a huge block of ice. It can also shatter unprotected electrical systems.

The preserving effect of the cold slows down the ageing of Shapanka, but without putting him into suspended animation. 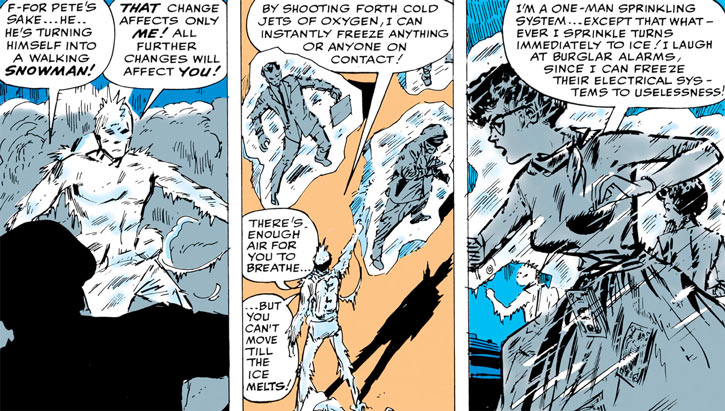 Somehow, bullets fired at him lose their velocity as they approach. They often shatter from the cold before they can hit him. Most bullets just hit the ground as a ball of ice without momentum left.

Shapanka once created new “arms” for himself. These are actually arm-shaped lengths of ice. He uses to climb out of a pit and grapple Iron Man. Though they can’t move, he can create them in quick successions. This functionally gives him extra arms made of ice.

The suit also radiates cold, but that wasn’t much of a factor in the story.

Gregor Shapanka was a brilliant but embittered scientist working at Stark International. He was also conducting personal research into cryogenics to gain immortality. In 1963, he attempted to steal special transistors from Stark to finance his private research, but was caught and fired by Iron Man.

Nobody believed his impassioned rantings about being about to discover the secret to immortality. However, Tony Stark chose to let Shapanka go without calling the police or suing him, as a nod toward his years of good work. Still, Dr. Shapanka was now blacklisted, which meant his career was over.

Shapanka built himself a suit that slowed down his aging while keeping him fully mobile. It also gave him cold-based super-powers. He soon used it to rob a bank in Long Island, which proved a satisfactory test of his power. Shapanka kept robbing banks in New York. The press came to call him “Jack Frost” (presumably as a reference to the wartime Jack Frost).

Triumphant but still embittered, Jack Frost then raided the Stark complex in Long Island. He wanted to take his revenge on his former colleagues and Iron Man.

However, Iron Man (Tony Stark) jury-rigged a heat beam, then a miniature furnace. These made it impossible for Jack Frost to use his equipment. He had to surrender to the police before he would pass out from the heat.

Years later, Shapanka finished building a new costume in prison and escaped. He took the name Blizzard, and had a career as a super-villain. Analysis shows significant differences from his debut as Jack Frost. Thus Blizzard (Gregor Shapanka) is covered in another profile.

In 1980, Shapanka’s career as Blizzard stopped. His powers became internalized and he slowly became a walking statue of ice and snow. Since that resembled his old Jack Frost appearance, he reverted to using that name.

The reason for this mutation is unrevealed. A good candidate is an incident some months before where his costume was supercharged and fused to his body by Electro.

Feeling increasingly alienated, Jack Frost retired to the Rockies. He found an improbably large cave, and turned it into an eerie kingdom of ice. There he spent much of his time brooding, creating striking ice statues and generally making the place eerier.

Hulk smashes, as you may know

Some months later the Hulk stumbled upon Jack Frost’s odd realm. Frost attempted to chase him away to be left alone. This angered the jade giant who destroyed much of Frost’s realm while fighting back. 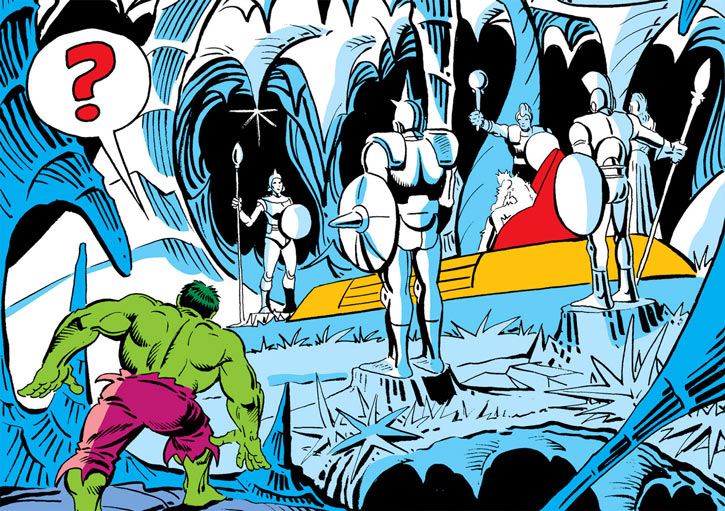 The titanic force of the Hulk’s blows eventually collapsed the entire cave. Jack Frost disappeared under the cave-in.

Shapanka later reappeared in his blue Blizzard suit. His powers, mutated appearance and changed personality were all gone as if nothing had happened.

During his original appearance, Shapanka comes across as the typical bitter, nerdy, half-mad Silver Age  scientist. His rants sound rather unhinged if one assumes that his allegations about immortality are nonsensical.

He craves money, freedom and revenge and has a hint of paranoia to him. He also likes to talk in pompous ways that show off his vocabulary.

When he mutated into his Jack Frost form, Shapanka was different. He was a reclusive, almost poetic, contemplative hermit and artist. He felt alienated from the normal world and just wanted to dream, to create and to ponder his immortality. Melodramatically, of course.

However, the mutated Jack Frost also seemed more unhinged than before :

(Bitterly) “How noble of you ! Big-hearted Stark tossing a crumb of freedom to [me,] a lowly crook !”

“Well, they’ve given me a name now ! ’Jack Frost’ ! How corny can you get ? Yet, the moniker does have an appropriate ring ! Jack Frost I shall remain to my trembling public ! Now Jack Frost will pay off Anthony Stark for firing Professor Shapanka ! I’ll walk right into his plant and destroy it, along with every one of his precious governmental projects !”

“I always hated you, Miss Potts ! You always treated me so coldly ! Now it’s my turn to freeze you out !”

“But I’ve found the secret of eternal life ! Think of it ! The money would finance my research into human immortality !”

“Fire, you fools ! My ice is more than a match for your useless bullets !”

“Who dares interrupt the somber meditations of Jack Frost ?”

“I came here to dream, creature, and you interrupted my dreams by tramping brutishly through my world of fragile beauty ! I thought I would be safe here, away from a warm-blooded world which no longer held a place for one such as I !”

Jack Frost would be redundant with the Icicle (Joar Makent), I reckon.

Note:
After he robs banks, Jack Frost’s Wealth rises to 006 until he’s imprisoned. Before he was fired, his Wealth was 005.

Drawbacks:
MIA toward Vengeful bitterness, Uncertainty (lack of experience with his powers).

Equipment:
Originally, a 9 APs Lab in his cellar.

Possible Powers:
APs of Sealed Systems and any of the Powers of his old Jack Frost suit are certainly a possibility, but weren’t demonstrated.

Bonuses and Limitations:
Weaponry (Jack Frost systems) can be used with his new Powers, given the similarities. 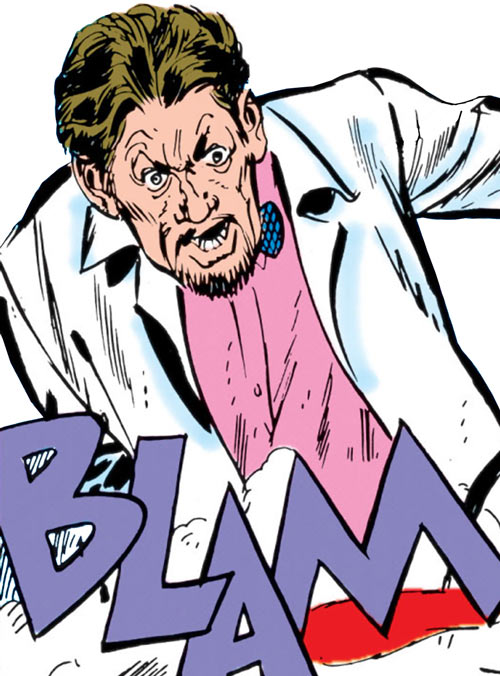 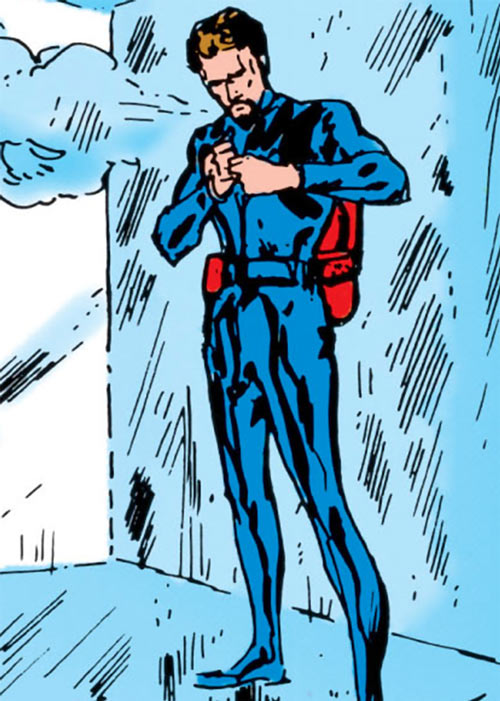 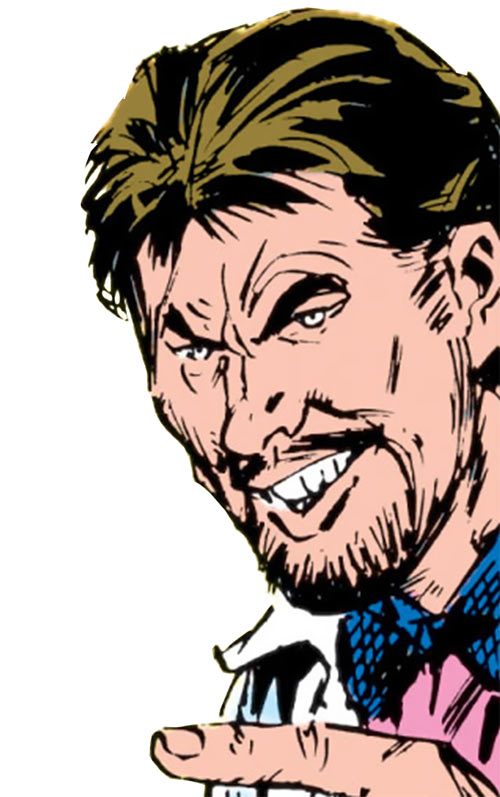 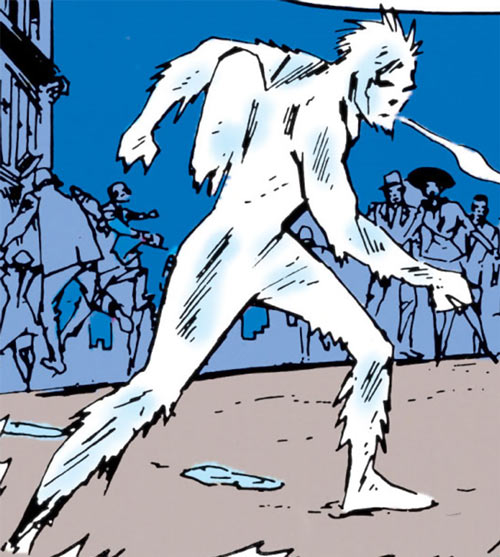 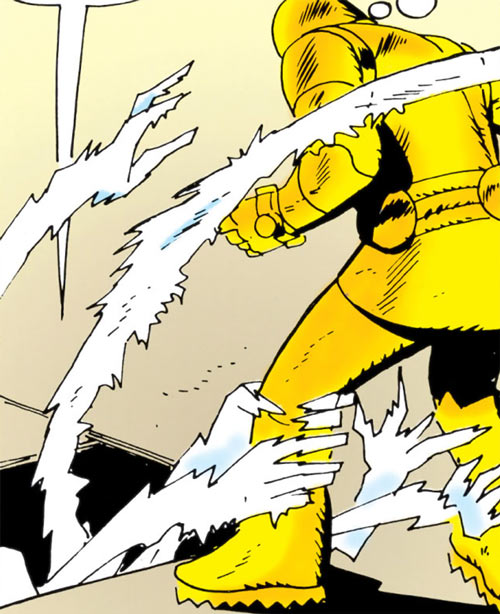 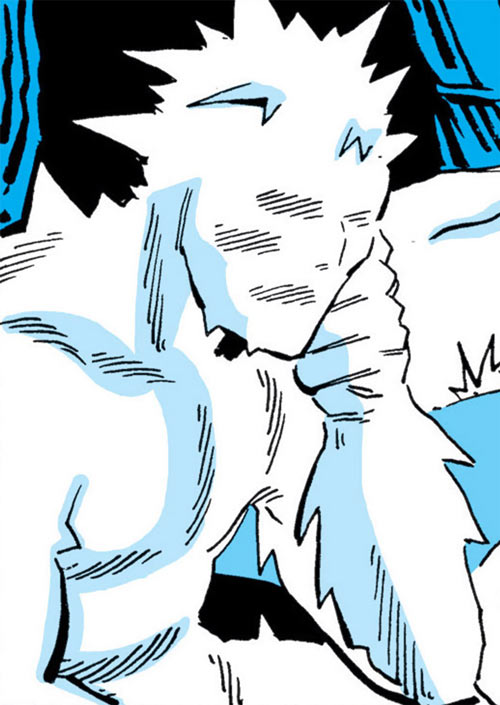