Blockade Boy is an obscure, silly Legion of Super-Heroes ally. He appeared in a 1966 storyline.

I can’t imagine why I’m writing up so silly a character.

I have filled in his history and abilities just a bit, for fun.

Blockade Boy’s “super-power” was the ability to change himself into an unmoving steel wall. In DC Heroes RPG terms, that’s Self-Manipulation.

He had only two “combat maneuvers.”

Although expelled from the Trendauer Naval Institute, Phyl, never the most ambitious student, nevertheless picked up a little bit of military training.

Phyl Staad of Amadus was originally from the Trendauer Naval Institute on Amadus. An orphan raised by the government, Phyl wanted to give something back to the society which had taken care of him. So he worked out, studied hard, and applied to enter the UP Starfleet.

Phyl’s mutant power, the rather ridiculous ability to transform himself into a steel barricade, surfaced just after he entered the Academy. In trying to blow off steam and come to terms with his ability, he engineered several practical jokes which resulted in his expulsion.

A bit chastened, at loose ends, but still wanting to do good somehow, he decided to emulate the Legion of Super-Heroes and use his power to become a crimefighter. A little uncertain of his power’s value, he decided to get some experience on his own, on Amadus, rather than setting off for Earth and the Legion at once. 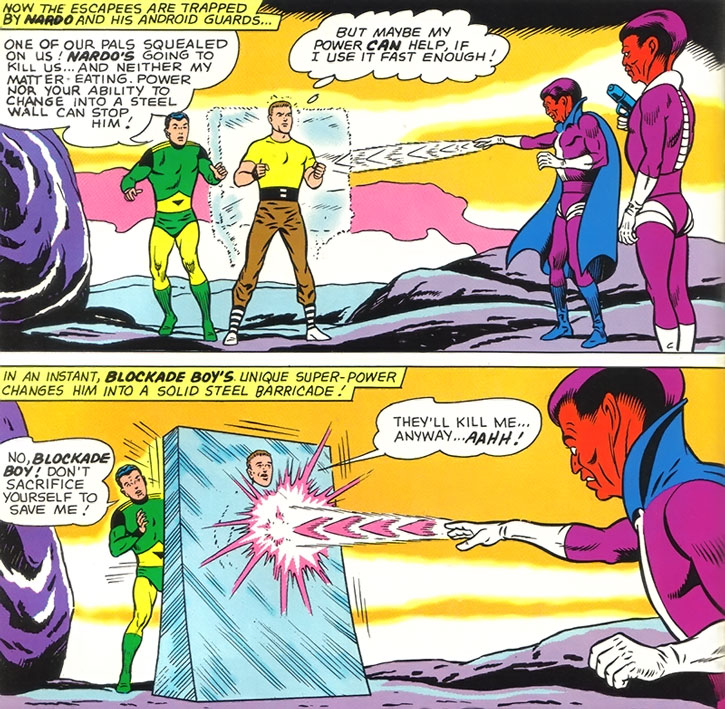 His first outing went well, despite his limited power. He foiled a robbery by climbing on top of a getaway flier, jumping into the air, and turning into a steel wall which crashed onto the flier, smashing it. When the crooks threatened innocent bystanders, Phyl sheltered them behind his steel form until the Science Police arrived.

One of the bystanders was a pretty young woman who asked Phyl out on a date.

Phyl’s second foray was less successful. He was captured by Nardo Arnante and made one of several superheroic prisoners of Nardo’s “super-stalag.” It wasn’t long before Nardo had even captured most members of the LSH. Blockade Boy befriended his fellow inmates and together plotted to escape.

During one ill-fated rescue attempt, Blockade Boy sacrificed his life to shield Legionnaire Matter-Eater Lad from one of Nardo’s nuclear bolts. In death, Phyl reverted to human form. Because he had died saving a Legionnaire’s life, he was buried on Shanghalla.

Proty II once assumed the identity of “Blockade Boy II,” a fictitious brother of Phyl, in order to apply to the Legion. In reality, Phyl was an only child.

Blockade Boy was a bit taller than average. He worked out and had a muscular physique.

He wore brown pants and a yellow shirt and had a black belt and black bracelets that he thought made him look tough.

He had brown hair and brown eyes.

Phyl was a bit of a practical joker, especially when he was under stress. However, he was a generally “nice guy” who wanted to do the right thing and help people, but have fun doing it.

(Upon being invited by Matter-Eater Lad to come along on a prison break) “Well, my power of changing myself into a steel wall can’t get us out, but I’m with you.”

“The guards can’t catch our act in this cave, so they’re not hip that you’re using your super-teeth and digestion to get us to freedom, Matter-Eater Lad !”

Blockade Boy is a part of the pre-Crisis DCU in the 30th century, and thus now only exists through Hyper-time.

He’s utterly minor, though, and you could insert him anywhere. Though I can’t imagine why you’d want to. 🙂

Bonuses and Limitations:
Self-Manipulation only allows Blockade Boy to assume one form, that of a 0 AP by 0 AP steel wall with Body: 12 and weight 13. He cannot move or speak in this form (-7 FC).

Military Science was never demonstrated (or even referred to). So take that out if you want to be completely true to the character’s one storyline. But he’s so minor… why bother ?

Helper(s): John Colagioia, Pufnstuff, Who’s Who in the Legion (most of the history is adapted from there). 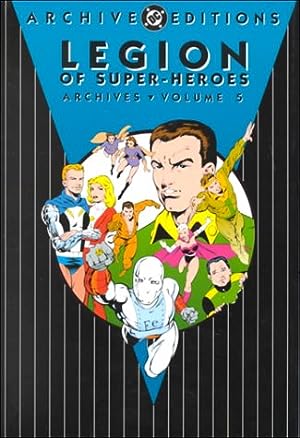 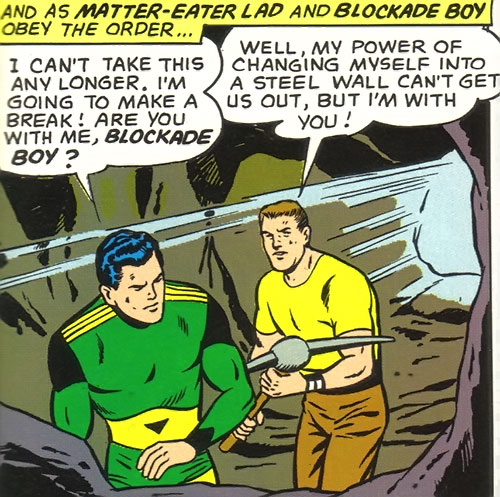