As the Blockbuster creature, Desmond is big; very big. With his mammoth size, comes a fantastic degree of superhuman strength and durability.

He can easily punch through thick columns of steel-reinforced concrete, and shrug off blows from superhumanly strong opponents like Superboy and Aqualad.

Moreover, despite his lack of formal training in hand to hand combat, he is able to move his considerable bulk with far greater speed and grace than one would expect. This makes him a fearsome opponent for any that would cross him.

Mark Desmond was the head scientist of the Cadmus genetics laboratory in Washington DC. His hard work was responsible for a variety of genetic breakthroughs. He and his team created the Genomorphs and two nominally secret projects codenamed Project Kr and Project Blockbuster.

On July the 4th, a small fire broke out in upper public levels of the labs. This drew the attention of three of the Justice League’s sidekicks: Robin, Aqualad and Kid Flash. The three youths investigated the fire and soon found themselves deep in the bowels of the true Cadmus labs.

The three sidekicks breached all of Desmond’s security measures. Thus, they discovered the truth of Project Kr. Cadmus labs had created a youthful clone of the Kryptonian hero, Superman. Desmond did his best to stop the sidekicks, but when all else failed he used a telepathic Genomorph to awaken the slumbering Superboy and had him subdue the heroic trio.

Desmond realized that the situation had gotten completely out of control. He reluctantly reported the incident to the Cadmus board of directors. He faced the group, known to him as “The Light,” and asked for direction on how to handle the sidekicks. When given the order to first clone and then destroy the youths, Desmond complied without fail or remorse. 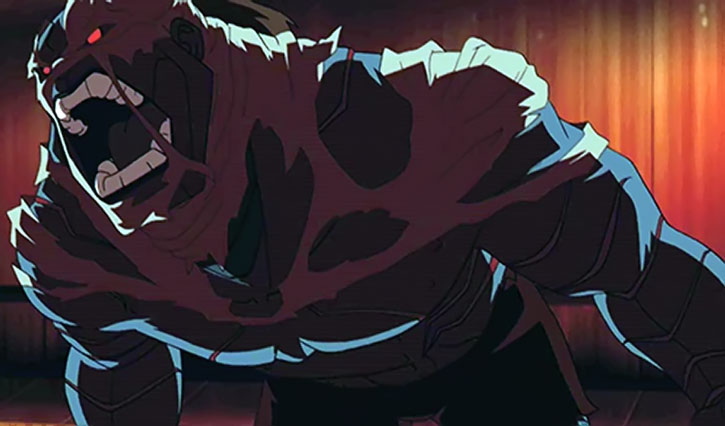 Desmond returned to the now imprisoned teens and commanded Superboy (once again utilizing the talents of a telepathic Genomorph) to return to his cell. He watched with satisfaction as the unruly young man stalked away, and then turned his full attention to his prisoners.

Despite the fact that he wasn’t unconscious for long, Desmond awoke to find his prisoners and his weapon had escaped. Without pause, he sounded the alarm and roused all of his sleeping Genomorphs to stop the youths escape plan.

Project Kr on the run

It quickly became clear that the Genomorphs would not be enough to stop the heroic teens, especially with the added strength that Project Kr added to their group. Realizing that time was short, Desmond raced first to the lab where he stored Project Blockbuster. From there he reached the Cadmus Laboratory’s surface exit. 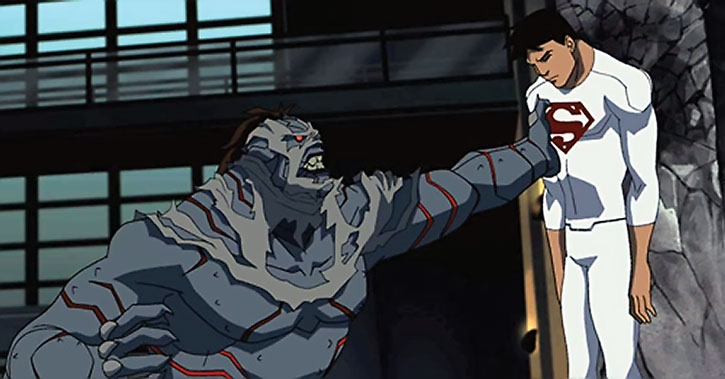 He arrived just in time to head off the youths as they were about to exit the facility. With a few brave words, Desmond revealed the vial of the Blockbuster formula and swallowed it in a single gulp. Its effects were immediate and horrifying.

His body contorted painfully and an inhuman cry left his rapidly deforming mouth. His cloths and skin tore in rapid succession as his body painfully swelled and grew to enormous size.

As the process came to a halt, the Guardian (former head of security for Cadmus) broke away from the group and attacked Desmond in the hopes of slowing him down long enough for the teens to escape. With a single contemptuous backhanded blow, Desmond knocked the Guardian unconscious and across the spacious room, and then roared a bestial challenge to the others. 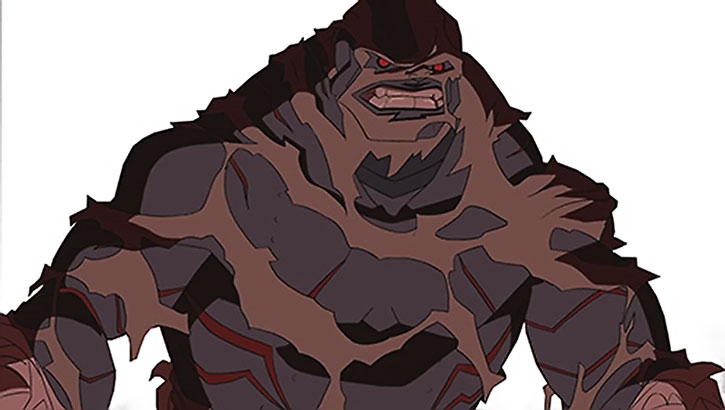 The four youths and Desmond then engaged in a desperate battle. Desmond’s new found monstrous strength proved to be a match for the youths and he fought them to a standstill until Robin devised a brilliant plan to drop the entire upper level of Cadmus down upon them all.

Despite his brilliance (possibly former) and raw power, Desmond soon found himself standing directly beneath a rain of rubble that hammered him into unconsciousness.

When Desmond finally started to regain consciousness, he found himself trapped within a field of emerald energy that emanated from the twin rings of John Stewart and Hal Jordan, the Green Lanterns. When last seen Desmond was being carried away, presumably for incarceration.

Before ingesting the Blockbuster formula, Mark Desmond was a nondescript Caucasian male, with long shoulder length which he wore tied back in a pony tail. His hair was a dull brown colour, except for the whitish fringe that coloured his sideburns. While working, he wore a standard white lab coat and thick glasses.

In his mutated form, there is no way Mark could be mistaken for a normal human. He is massive in size, measuring in at a minimum of at least 6 and a half feet in height and weighing well over 400 pounds of solid mutated muscle. His skin has taken on a greyish leathery appearance, and is streaked with reddish cracks or seams where his skin separated due to his startling transformation.

He has permanently lost all of his hair and his corneas have turned blood red, while the remainder of his eyes have turned a dark sickly black. Upon his initial transformation, his new body actually shed his human skin in the same manner as a snake. He wore the tattered and torn skin from his previous life like a cloak until it was destroyed in battle.

Desmond is a strict, stern and remorseless man. He used his position and genetic creations to manipulate and bully his staff and security officers into complying with his wishes. He was openly impatient and proved to be very possessive of his creations.

It was immediately clear, that he thought of them as things to use and dispose of, even Superboy who appeared to a normal youth at first sight. The only thing that actually showed the cracks in Desmond’s exterior was his reaction to the Cadmus Board of Directors; “The Light.” It was clear that he was quite frankly terrified of them.

Once he consumed the Blockbuster formula, Desmond became a rampaging monster seemingly incapable of human speech. His motivations and personality became decidedly murky at this point it, and it is unclear if anything at all remains of the original Mark Desmond.

“Tell me Guardian, what part of no interruptions didn’t you understand ?”

“Did I miss a perimeter breach alert ?”

(To the Guardian, regarding Superboy roaming free) “Get the weapon back into it’s pod, NOW !”

(To Superboy) “Don’t start thinking now … see, you aren’t a real boy. You are a weapon, and you belong to me.”

(To Dubbilex, regarding the sidekicks) “When we are sure the clones are viable … delete the source material.”

“Project Blockbuster will give me the power to restore order to Cadmus.”

The events of Young Justice are canonical and take place on Earth-16 within the DC Universe. Any travel through the DC Multiverse could potentially bring the player characters into contact with this version of Mark Desmond.

Desmond’s precise STR is hard to pinpoint due to his singular appearance. What has been demonstrated though, is that he was capable of combating both Aqualad and Superboy simultaneously with no discernible problem. With this in mind I upped his STR to a value equivalent to Superboy’s.

Before ingesting the Blockbuster serum, Mark Desmond was a relatively normal man. His physical stats were 02 APs, and he used to have the Credentials (Cadmus Laboratories) advantage, and he didn’t have the Strange Appearance Disadvantage.

Of special note is that upon his initial transformation into his monstrous form, Desmond stopped displaying rational thought and even the capability to speak. It is quite possible that in this form his INT, WIL and MIN have all dropped to less than 02 APs and he has lost all of his skills and advantages. 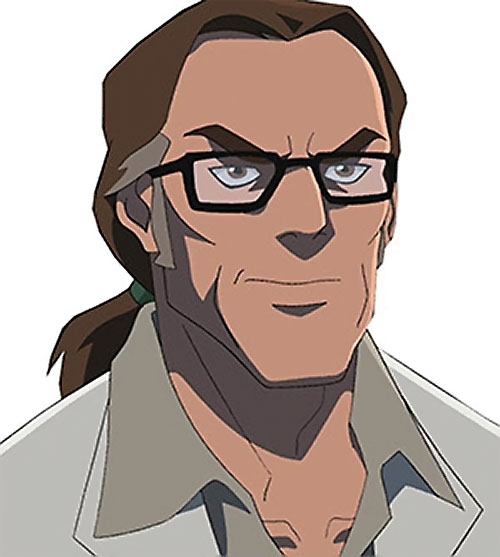 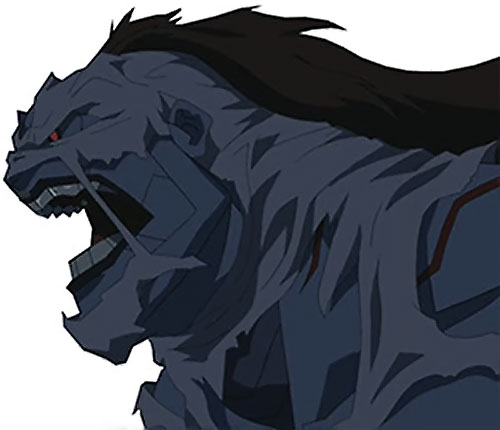 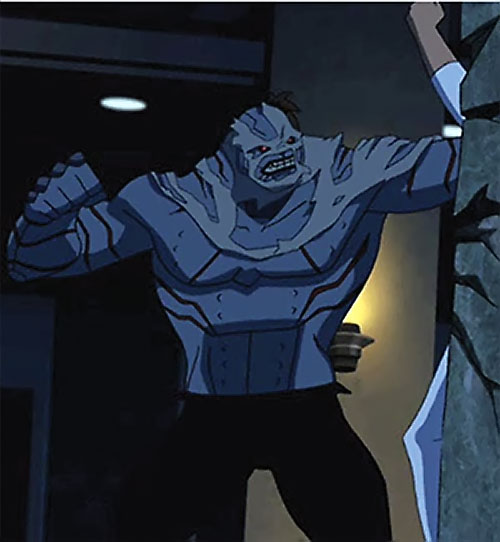