The Blood Brothers are two superhumanly strong aliens. They have a gift for brawling and leg breaking.

Due to their power of symbiosis, the closer they are to each other, the more powerful they are. Thus, the best way to defeat them is to separate them.

The Brothers are also highly practices at fighting unarmed as a duo, allowing them to defeat powerful opponents.

This pair of enforcers were among the mercenaries assembled by Thanos. They were often entrusted with minor missions involving brawn. Their fighting track record is nothing to sneer at, with victories against Iron Man (Tony Stark), the Thing (Ben Grimm) and Hercules (Herakles). 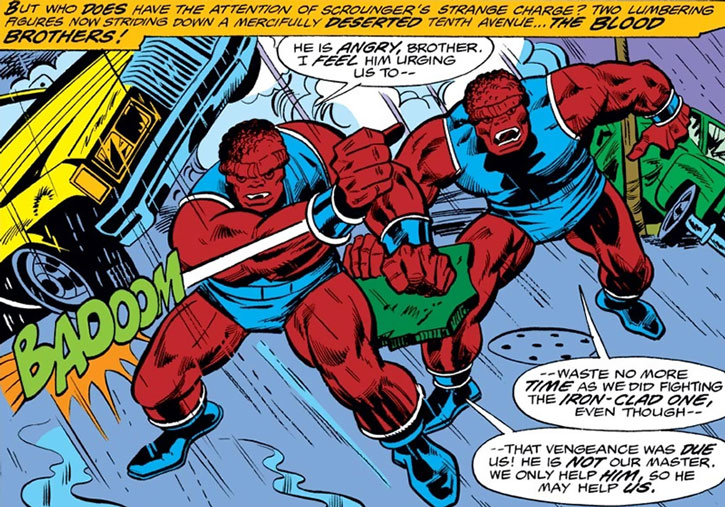 When Thanos’ empire fell, they were imprisoned in the Vault. Thanos’ tech had been modified by Avengers to keep the Brothers depowered. They left the Vault at Quasar’s request, only to end up stranded on Mars. How they came back to Earth is unclear, but they were back during the Maximum Security  episode.

For unclear reasons, they killed the Skrull Z’Cann, secretly a Professor X ally, in Salem Center. They later were part of the invasion against the Ruul Kree ship that ended the Maximum Security mess.

The interstellar equivalent of enforcers for a loan sharking operation. However they are surprisingly articulate, and more adept with ultra tech (such as spaceships, image inducers, etc.) than their brutish appearance suggests.

They have an annoying tendency to relay each other when speaking, quite often in mid-sentence.

They could have been left being by an uncaring Dominator party after the Invasion . In that scenario they are a roving pair of alien bandits, taking whatever they need, such as food.

Their appearance and outlook is also quite reminiscent of Apokolips. Thus, they could easily be agents of Darkseid and Kalibak, still stranded on Earth after the mission they were sent on was shot to pieces by Green Lantern Hal Jordan.

Advantages:
Leadership (solely with each other, worth 10 points), Schtick (Fighting Array (hand to hand, each other)).

Both Blood Brothers have the exact same stats.

Their reported vampiric ability were never used AFAIK (their teeth couldn’t penetrate the Thing’s hide) – they *might* have low APs of Vampirism.

The Blood Brothers get gradually weaker as the physical distance between them increase. This special Power Loss works as follow : 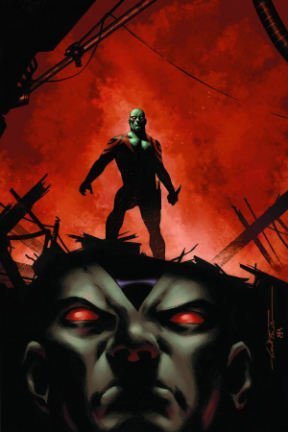