This specific character was part of our 2014 Halloween themed character creation contest.

The team reached it before any competitors, and set down on it. Their communications suffered signal interference as they approached, and was fried by a pulse of odd energy.

The readings it’d previously emitted stopped with the pulse, but by then it was too late.

Shortly after the pulse hit, the spacecraft experienced random objects turning two-dimensional, sticking to surfaces. Then a two-dimensional image became three-dimensional, the picture of a dagger becoming a real one that floated before the astronauts.

Ignoring the scientists’ suggestions not to touch it until it’d been analysed, Palmer grabbed the dagger. And it grabbed him.

The meteor was the remains of an ancient alien experimental satellite. It had been destroyed after making contact with The Surface, a plane of existence with only two spatial dimensions. The rift created a permanent link between the planes, which caused chaos on The Surface for aeons.

When the spacecraft touched down, the interruption to the debris’ surface allowed an entity through. Its goal was to explore and try to close the rift. It took control of Palmer. But the sensation of three spatial dimensional proved too much for it to process alone. It retained Palmer’s mind as a guide, but the stress caused his psyche to shatter.

The spacecraft returned to Earth piloted by a semi-catatonic Palmer, the only survivor. Of the other astronauts, the only evidence was the image of the cross-section of a human body meticulously drawn on one wall, its arms in defensive positions.

Coming out of his catatonic state in a medical facility, Palmer left a number of horribly mutilated staff in his wake as he left. Next to each he drew a bloody circle, which gained him his name when the press learned of the murders. The circles weren’t exactly circular, but each was identical.

Physically altered by partial interface with The Surface plane, the Blood Circle Killer is highly resistant to damage, not fully understanding it when he’s hurt.

Clumsy moving in three spatial dimensions, the Blood Circle Killer uses animated images in combat rather than entering direct combat. If pushed, he will do so, fighting with abandon until his opponent stops moving.

He retains access to Palmer’s phenomenal skill with all kinds of vehicles, if not his understanding of giving way to other drivers. Which, to be fair, Palmer wasn’t that big on anyway.

This is my knife

His dagger, Origin Point, attunes his body more directly to The Surface. This allows the Blood Circle Killer to alter the local area by fiddling with the dimensions of objects.

Origin Point can also slice through reality to create a portal to The Surface’s plane of existence. This allows him to travel there or banish others. Being there in a three-dimensional body feels wrong though, and he’s unwilling to leave the body until his mission is complete.

He only travels to The Surface to avoid impediments that take too long to deal with. He’ll move to The Surface and return to Earth beyond the offending obstacle.

The dagger gives off readings that correspond to those of order magic in the regular universe.

The Blood Circle Killer has little understanding of hygiene and nutrition. He thus appears gaunt and unkempt. This is generally overlooked due to the bloody circle he’s drawn on his face, passing over his eyelids and mouth in a shape identical to that left by his victims.

He’s possessed of an unnatural stillness. It is broken by the occasional twitches as the host personality rails against its confinement.

Origin Point is a vaguely unreal looking dagger. Its blade is so thin as to be virtually two-dimensional, and its hilt a fairly ornate silver coloured substance that feels plastic.

Deeply disturbed by three-dimensional movement, the Blood Circle Killer will deal violently with anyone that gets in his way as he goes about his quest. What he thinks his quest is remains unclear. His fractured mind sees twisted pathways towards his goal of closing the aperture between The Surface and the plane where he finds himself.

He doesn’t understand much about the world and its society. The entity is only able to retrieve fractured memories from Palmer’s mind that are difficult to interpret from his perspective anyway.

He’s slightly obsessive compulsive, needing things to be placed orderly, and as flat as possible. He’ll often lie as flat to the floor as possible in a calm, private place, the closest to peace his fractured mind is able to come.

The Blood Circle Killer possesses no fight or flight mechanism. He will attack anything that causes it harm. Since its current state is already mentally painful to it, it’ll generally attack anyone it comes into contact with.

“This imperfect world of chaotic geometries must be corrected, simplified.”

He has been approached – carefully – by agents of the Blood Red Moon. While communicating with him is difficult, he has come around to viewing their orderly nature as something he can loosely ally himself with.

He listens to their offers and suggestions without instantly killing the messenger, working with them should he consider it aligned with his goals.

Helper(s): Dr. Peter S. Piispanen for giving us the System for Magic DC Character Creation and for comments, Darci. 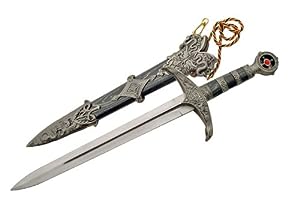 Decorative (or not) dagger